Smithsonian Institution mammal curator Frederick W. True first identified the beaked whale species named for him in 1913. Only recently has enough information been available to identify them on sight. Technology is changing that.

Beaked whales are a fascinating and elusive group of cetacean species (cetaceans include whales, dolphins and porpoises). Beaked whales live in deep water environments, and dive to incredible depths for long periods of time, making them mysterious and difficult to find. It takes a combination of luck and perseverance to study them.

In recent years, high densities of deep-diving cetaceans – sperm whales and several species of beaked whales – have been found during cetacean surveys along the edge of the continental shelf, about 200 miles south of Cape Cod. Introduction of new technologies to this work since 2016 has generated a bonanza of new information on the biology and ecology of these hard-to-find animals.

“The region near Georges Bank is clearly an important habitat,” said Danielle Cholewiak, a research ecologist in the passive acoustics research group at the Northeast Fisheries Science Center’s laboratory in Woods Hole, Massachusetts. “During our abundance survey in 2016, we not only had positive identification of True’s beaked whales but we were able to get photos and acoustic recordings. That was a major breakthrough.” 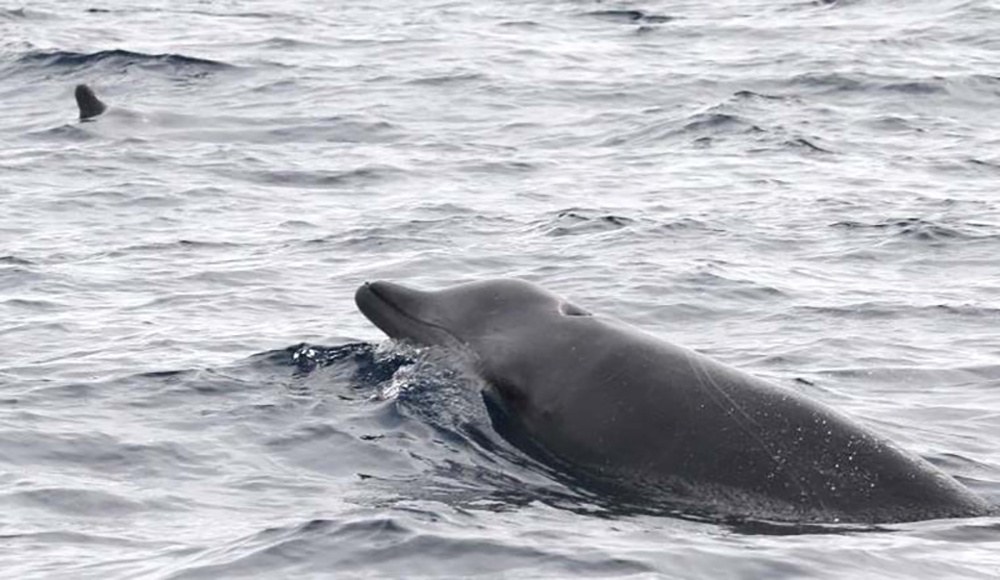 More beaked whale research cruises followed in 2017 and 2018, each cruise revealing more about the species. Cholewiak and her team named these projects the Integrated Technologies for Deep Diver Ecology Program, or ITS.DEEP. The primary goals of the program are to test and integrate multiple new technologies to assess the ecology and distribution of deep-diving cetacean species. They include beaked whales, pygmy sperm whales – often called kogia for their scientific name – and sperm whales.

The 2017 survey was dedicated to the True’s beaked whale habitat near Georges Bank. The multi-institutional research team led by Cholewiak demonstrated they could go to an area where they thought the whales were and find them. They were successful even though they had fewer than 12 days at sea and had to skirt a hurricane.

They conducted their first “focal follow” data collection. This is a technique used to gather detailed information about the behavior and movement patterns of individual groups of animals. Such studies had only been done successfully in deep-water areas close to shore. 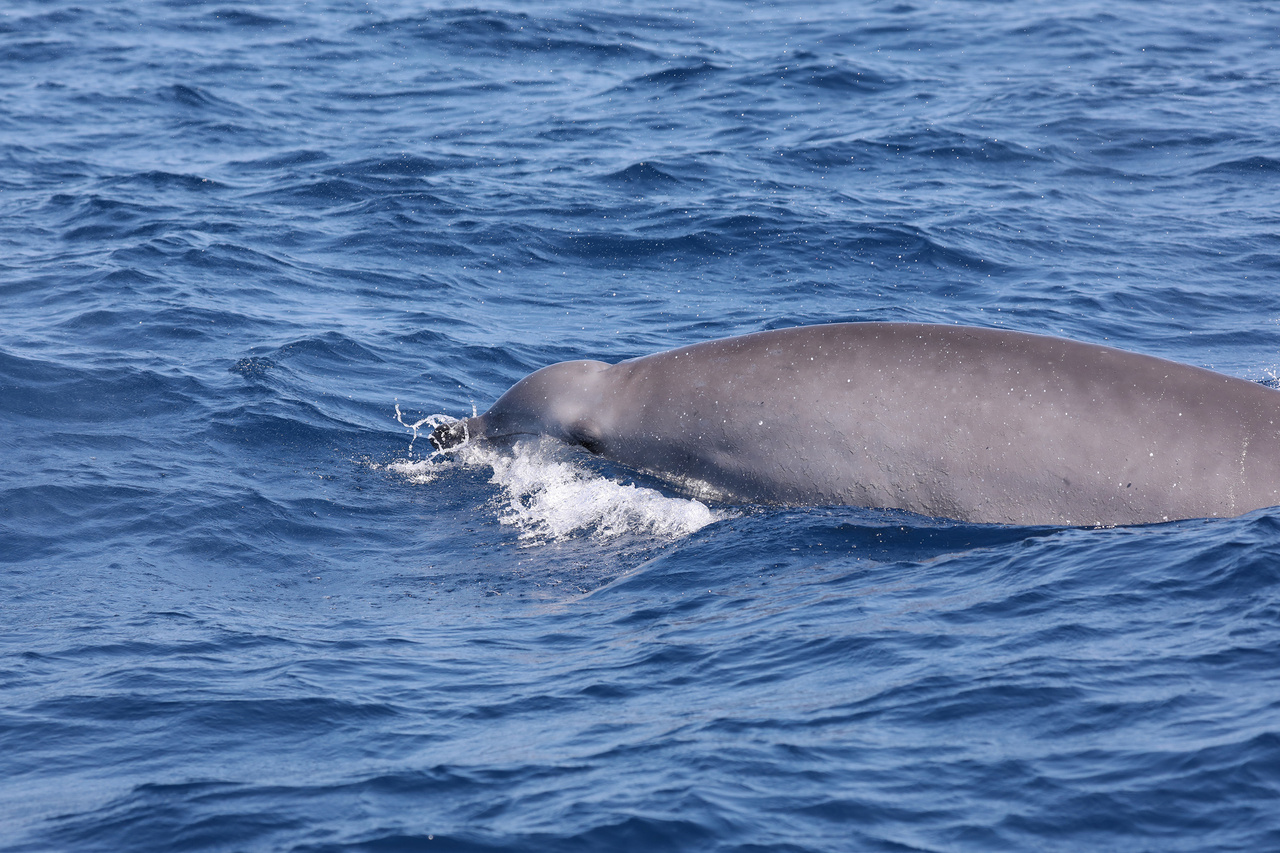 One of six known beaked whale species,True's beaked whales have remained largely a mystery since the species was identified more than 100 years ago. Much of what is known about them has occurred in the past few years.

They also collected environmental DNA, or eDNA, a small amount of genetic material left in the environment when an animal passes through it. The eDNA samples are sent to molecular biologist and cetacean specialist Scott Baker’s lab at Oregon State University for processing. The samples have revealed a new haplotype – new genetic information that is not in any known genetic catalog.

It became clear that this habitat region off Georges Bank was the only known place in the world where this species can be reliably studied.

Each annual survey has introduced different technologies into the project. They have included towed passive acoustic arrays, surface floating and bottom mounted acoustic recorders, and using small boats to get up close enough to the animals to place acoustic tags on them.

In 2018, with more time at sea, researchers made more breakthroughs. They saw or heard multiple True’s beaked whales nearly every day they were in their primary study area. They tagged the first True’s beaked whale with a suction-cup digital acoustic recording tag, known as a DTAG. The tag recorded the movements and acoustic behavior of the individual for more than 12 hours. After that it came off and was recovered so that the data could be downloaded.

The tag revealed the depths to which the animal was diving, how often it was foraging, and what other species were in the area. An acoustic recorder deployed in more than 2,000 meters (more than 6,500 feet) of water for 3 weeks had nearly daily detections of True’s and Cuvier’s beaked whales. It also detected kogia, another enigmatic deep diving species.

In 2019, poor weather and fewer days at sea limited research activities for the survey, part of a series from ITS.DEEP. Despite those challenges, the team collected photos and acoustic data and observed three beaked whale species – Cuvier’s, Sowerby’s and True’s – using similar habitat. They also observed kogia mothers with calves. 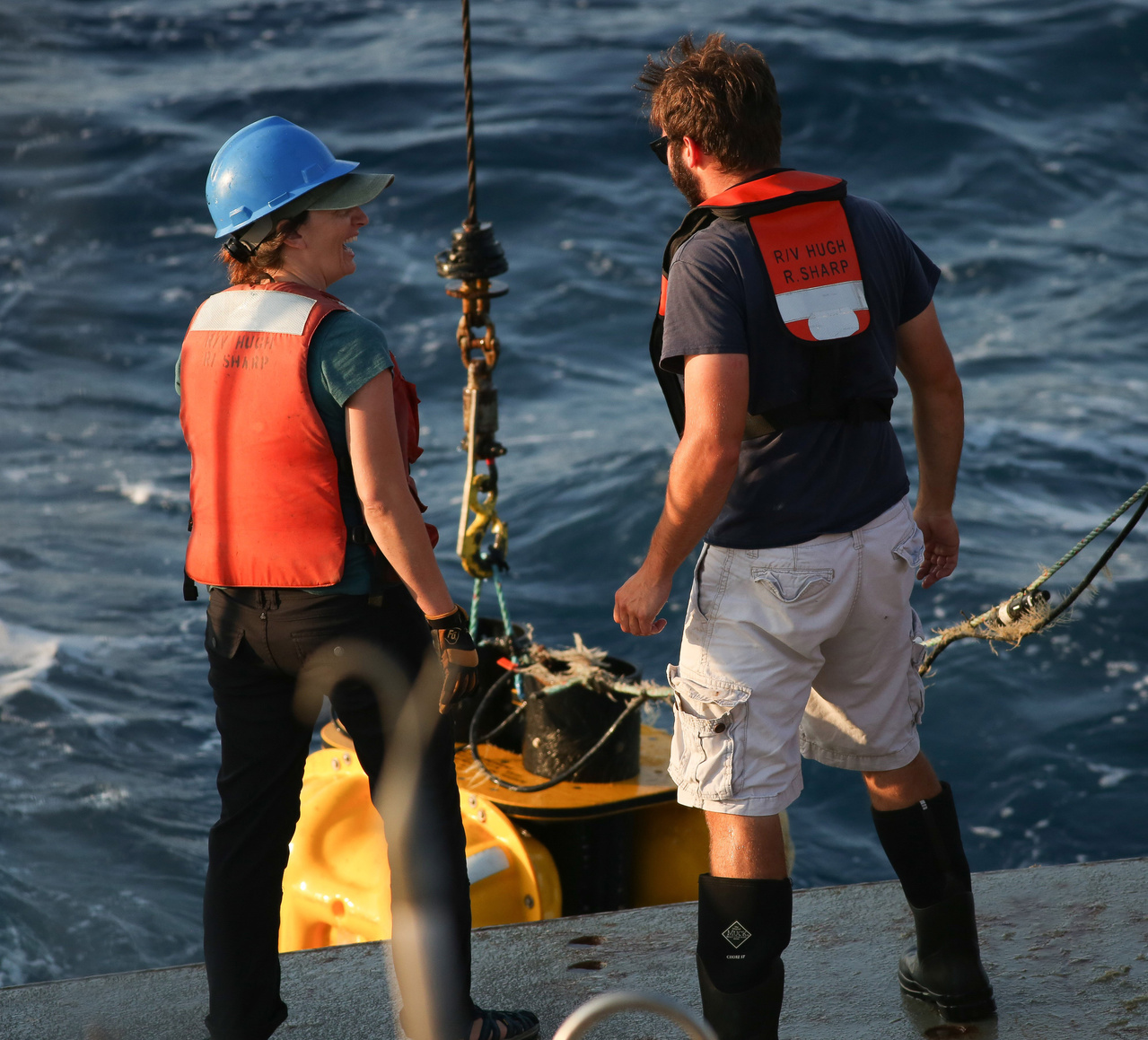 Recovery of a HARP, or High frequency Acoustic Recording Package, during the 2019 survey. Three of these instruments had been on the seafloor collecting data for a year.

“The 2019 sightings were rare. By now, we have learned that Cuvier’s and True’s beaked whales are often in the same area, but not typically with Sowerby’s,” Cholewiak said. “Even less is known about kogia than is known about  beaked whales, so the sightings of calves were particularly exciting. Kogia are very shy and will dive when approached. They are also hard to see on the surface as they look like a floating log.”

The research team plans to expand their research to other beaked whale species, especially Cuvier’s, Gervais’ and Sowerby’s beaked whales. More passive acoustic work will be conducted, and they hope to do more tagging and eDNA sampling, improving their techniques over time.

“We want to continue to introduce new technologies into the project to learn more about the distribution and ecology of the various species of beaked whales,” Cholewiak said. “We have learned a lot in just a few years, but there is so much more we can do. It is exciting!” 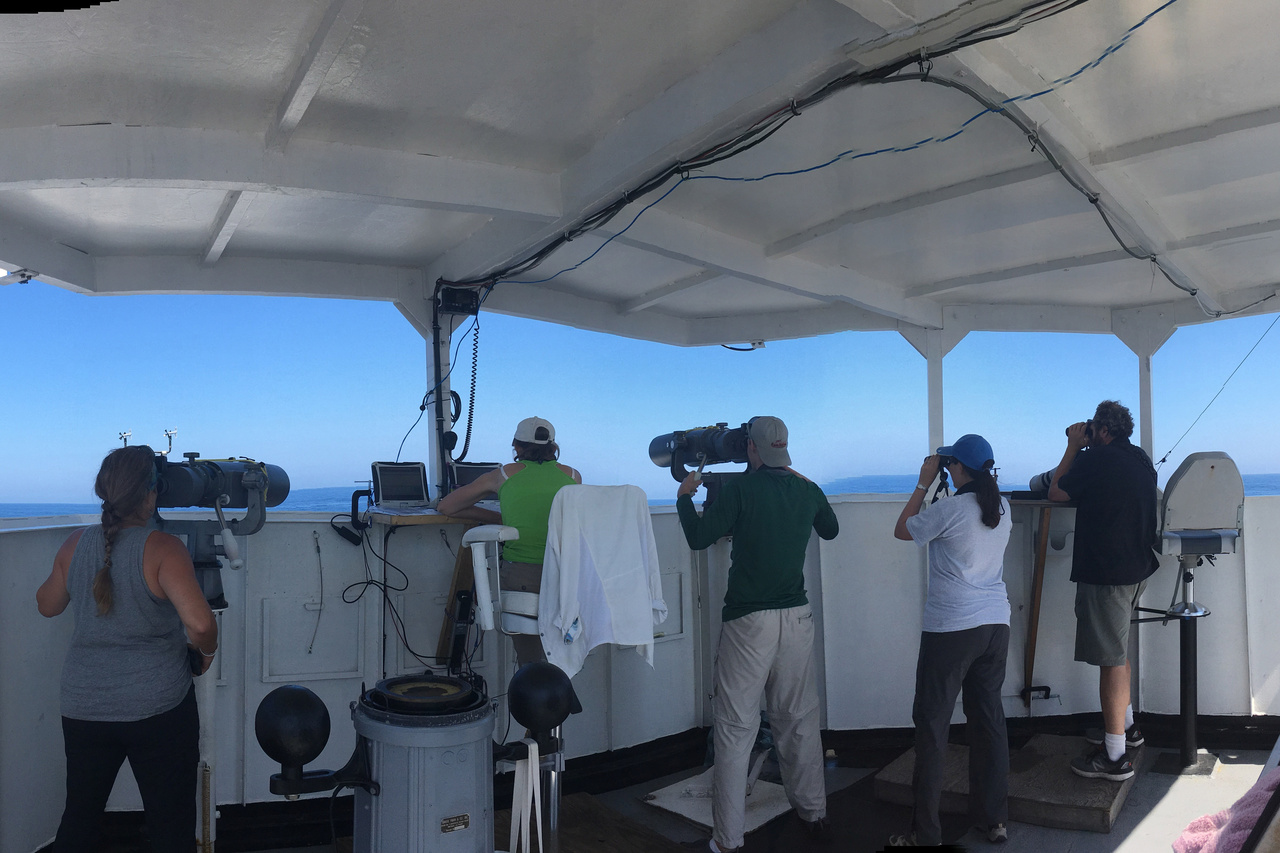 The visual team aboard the Gordon Gunter cetacean survey searches for animals. Two sets of Big Eyes, massive 25x150 binoculars, allow them to search up to 7 miles away for marine mammals, sea turtles and seabirds.

These cetacean research surveys are part of the Atlantic Marine Assessment Program for Protected Species, or AMAPPS. The collaborative long-term research and monitoring program involves the Bureau of Ocean Energy Management, the U.S. Navy, NOAA Fisheries, and the U.S. Fish and Wildlife Service. The program collects seasonal data on the abundance, distribution, and behavior of marine mammals, sea turtles, and seabirds throughout the U.S. Atlantic Exclusive Economic Zone.

Research on beaked whales, thought to be distributed along the eastern seaboard, increased significantly in the early 2000s after a mass stranding in the Bahamas. “Hot spots” for the whales have been found around island chains, but Cholewiak’s research in a more remote area has obtained a wealth of data on the species, especially on True’s beaked whales, a major accomplishment in just a few years of effort.

Duke University researchers recently studied a population of Cuvier’s beaked whales off Cape Hatteras, North Carolina. Other beaked whale species further north and in Canadian waters are being studied by researchers at Dalhousie University and Canada’s Department of Fisheries and Oceans.

Last updated by Northeast Fisheries Science Center on May 11, 2020