"There is No Typical": Life as a West Coast Groundfish Observer

“Salty, watery, muddy, bloody, little space, on a constantly moving deck” may not be the words most people would apply to a job they actually enjoy doing. But for fisheries observer Woody Venard, it’s an accurate description. 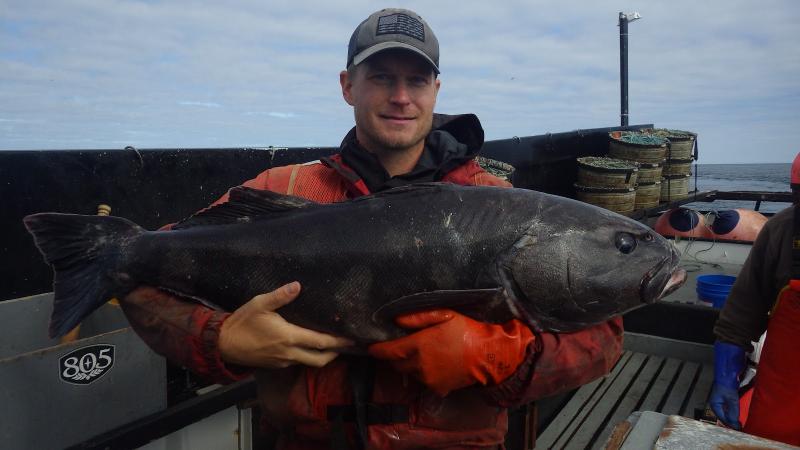 Woody Venard holds a skilfish on the deck of a fishing vessel. (Photo courtesy of Woody Venard)

As one of around 750 observers across the country, Venard is a professionally trained biological technician. He collects data on what’s caught and discarded from commercial fishing boats, along with data on interactions with seabirds, marine mammals, and sea turtles. Observers can also work in processing vessels and plants. Conditions can be challenging on the seas, but the data collected is crucial to sustainably managing our marine resources.

Building on a Childhood Passion

For Venard, the path to observing began as a kid in North Idaho. He would tag along with a fishing rod while his dad, a photographer, scouted wildlife shots. “I’ve been a fish nut since I was a tiny little kid,” he says. “I remember catching a bass off the dock as a 6 year old and thinking it would pull me into the water.”

With his long-time love of fishing, Venard eventually found a way to make it his career. After spending time as a carpenter, firefighter, and dock builder, he started college at age 27, studying fisheries biology. After earning his bachelor’s degree, he reached out to an observer provider, which offered him a position out of Fort Bragg, California, in the West Coast Groundfish Observer Program. After a year in that port, he moved to Eureka, California, where he has been with the program for the past 6 years.

"There is No Typical Trip"

Venard works year-round, but there is less fishing activity in the winter and spring. Over the summer and fall, he can spend up to 20 days per month at sea. The majority of the trips run 1 to 3 days, with his longest trip going for 6 days. He is notified a day or two before a trip, which could depart early in the morning, afternoon, or even in the middle of the night. “There is no set schedule,” he says. “You never know what’s going to happen.”

Because of the variety of gear types and species covered by the program, “there is no typical trip.” For a longline trip, for example, Venard will spend 2–3 days at sea. When the boats haul in their gear, usually twice daily, Venard records which species are caught and whether they’re kept or discarded. Once back on shore, he must spend a few hours entering the data and reviewing it with a debriefer for any needed corrections. For other gear types, such as trawlers, Venard and his fellow observers have transitioned to electronic reporting. They enter data directly into a ruggedized tablet at sea and upload it upon returning to shore.

“Tablets have really changed our lives for the better because of the reduced paperwork,” Venard notes. With the intent of helping developers further improve the technology, Venard undertook a survey of his observer colleagues on the West Coast. He asked them to rate various aspects of the tablets and software. Overall, he received positive feedback from respondents. He presented his findings at the American Fisheries Society annual conference in August 2022. He has also submitted the presentation for consideration to the March 2023 International Fisheries Observer and Monitoring Conference in Tasmania.

Venard’s favorite part of being an observer? “I get to do all kinds of different fisheries; I don’t do the same type of trip over and over so I see many different types of fish,” he says, including blob sculpin and a one-time skilfish sighting. He also emphasizes the uniquely critical data that observers bring to scientific fisheries management: “It’s a glimpse into what’s going on at sea; without honest observers there would be no record of what’s being discarded and that’s pretty important.”

“Observers need to be flexible, adaptable, and willing to work with a lot of different types of people,” he says. He notes that while he came into the position with those skills, the job has “definitely sharpened them.” Venard plans to stay in fisheries science, potentially becoming an observer debriefer, or a fisheries biologist on one of the nearby rivers.

For others considering observing, he advises “asking yourself very honestly if you can handle the strange hours, the loud noises, the smells, the being on call. If you can handle that, then enjoy your time out there looking at weird fish.”

Last updated by Office of Science and Technology on January 25, 2023