Scientists successfully tested the feasibility of using Saildrones to follow individual fur seals over long distances while simultaneously assessing their prey and habitat. 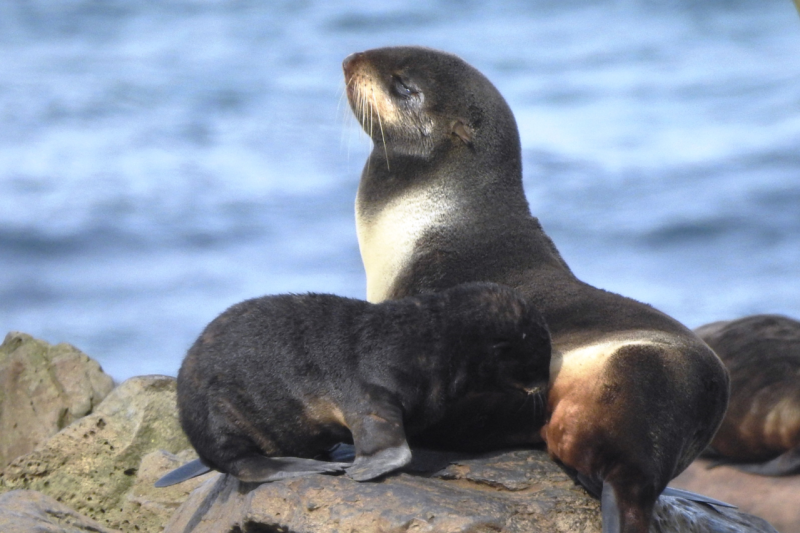 A new study demonstrates that unmanned wind- and solar-powered surface vehicles can be valuable tools to track marine mammals over long distances and extended time periods.

“Collecting information on fine-scale relationships between predators, prey, and habitat in the open ocean is incredibly challenging and often cost prohibitive. Until recently, most scientists didn’t consider it an option,” said Carey Kuhn, the Alaska Fisheries Science Center scientist who led the study. “Our study shows that innovative technologies like unmanned surface vehicles now make that possible.”

Saildrones followed individual northern fur seals over multiple days in the summer of 2016 and 2017 and up to 150 kilometers in the waters off Alaska. They collected information about prey and ocean conditions as the seals experienced them. The study marks the first time saildrones have been used to track a marine mammal. 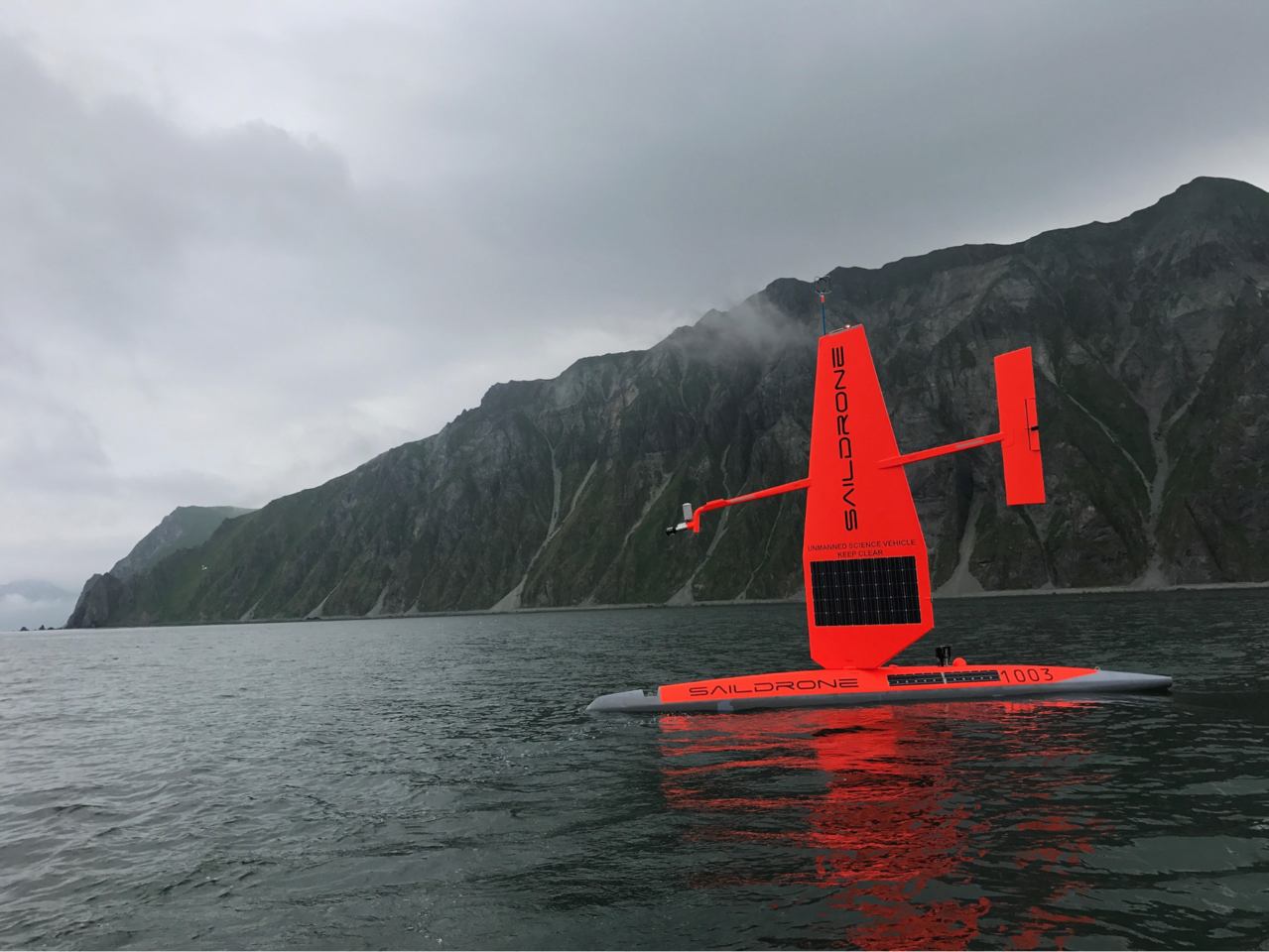 Scientists track individual marine animals to gain detailed information about  relationships between predators, their habitat, and their prey.

“Fine-scale relationships tell us what an individual seal experiences on a foraging trip, and what prey environment they are most successful in,” said Kuhn. “A successful foraging trip means she can provide for her pup.”

In recent years it has become increasingly important to understand what influences the foraging success of northern fur seals.

“Northern fur seals that breed in the Pribilof Islands have been declining for unknown reasons. The number of pups born on the islands is now at a 100-year low,” Kuhn said. “Information about fine-scale relationships between fur seals and walleye pollock—their main prey—would help us see what role prey availability may have played in the decline.”

A Robot to Go the Distance

Studies of fine-scale relationships between marine predators and prey have typically been conducted from research vessels. But vessel-based studies are costly and constrained by weather, daylight, and location. This limits the distance and time they can cover.

Unmanned vehicles are increasingly being used to supplement vessel surveys. Cost-efficient, infinitely patient, and unfazed by cold or dark, they can expand survey coverage. They can also reach areas that are shallow or otherwise inaccessible to large research vessels.

Autonomous underwater vehicles have been used to follow sharks, fish, and turtles. But these underwater robots are limited by battery time and could not measure prey abundance. To be comparable with traditional vessel-based surveys, unmanned vehicles need longer tracking durations and direct measurement of prey.

“The instruments we use measure echoes, not fish. We have to be able to interpret what the saildrone sees from the point of view of fur seals. We are fortunate that echoes in this part of Alaska are dominated by a single species, walleye pollock, the major prey item for these seals.” said De Robertis. ”Another advantage of the saildrone is that it is small and quiet. Fish do not dive as they do when approached by survey vessels. So we know the true depth distribution of prey to compare with the diving behavior of seals.”

Coauthor Calvin Mordy helped lead the development of the platform to collect high quality oceanic and atmospheric observations. He noted: “The saildrone is a unique interdisciplinary platform that permits us to quietly assess the habitat and prey field of northern fur seals.” 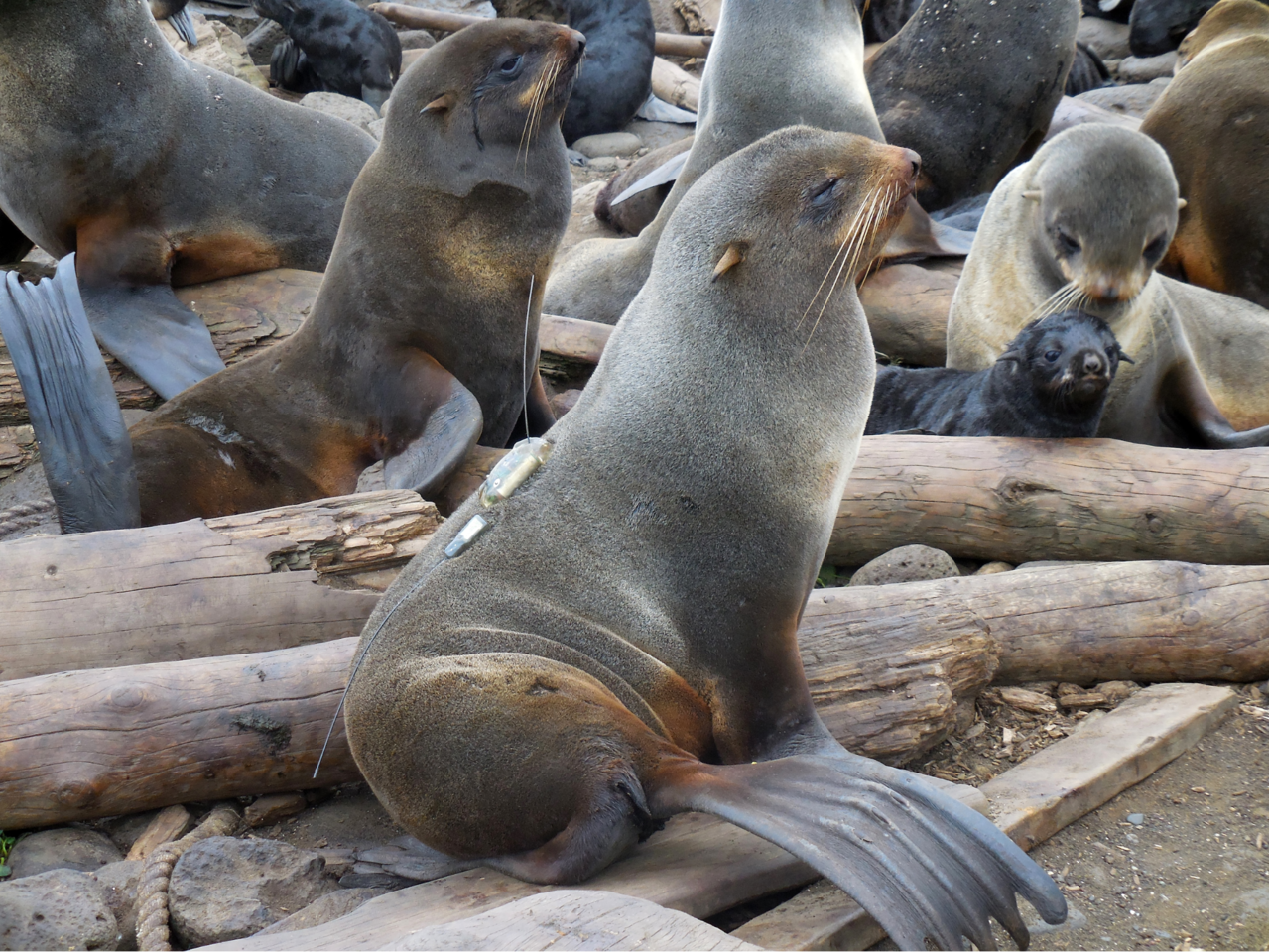 A female northern fur seal equipped with a satellite tag that will transmit her location at sea.

Kuhn’s team set out to test the feasibility of using saildrones to collect information on interactions between fur seals, their habitat, and their prey.

They equipped adult female northern fur seals on St. Paul Island, in the Bering Sea, with satellite tags glued to their fur. These instruments would transmit each seal’s location, which was used to guide the saildrone.

The goal was to follow each female for approximately two days while collecting data on oceanographic conditions and prey availability along her foraging path. 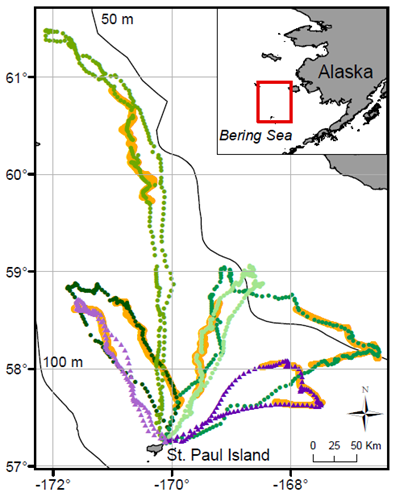 “There were a lot of potential difficulties,” Kuhn said. “Since a saildrone’s speed depends on environmental conditions, we didn’t know how long it would take to catch up with its targeted seal. We didn’t know how fur seal travel speeds would compare with saildrone speeds. Or how much of a delay there would be in the location transmission process from seal to satellite to saildrone.”

The saildrones successfully followed six individual fur seals over more than two days and as far as 150 kilometers.

“We were surprised at how well the saildrones were able to stay with the animals,” Kuhn said. “It actually worked much better than expected.” 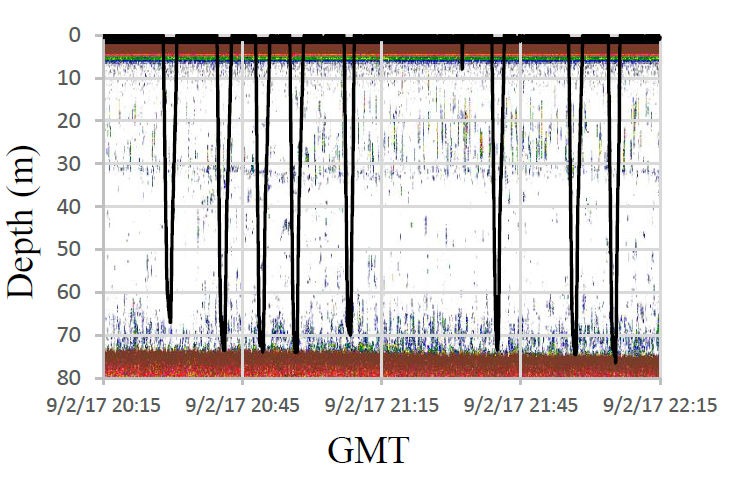 Northern fur seal dive behavior in relation to the prey field (echosounder backscatter) recorded by the Saildrone. This female made a series of deep daytime dives to near the sea floor.

“It is so exciting to have the ability to measure the environment our fur seal is seeing while she’s out feeding,” said Kuhn. “These data give us insight into how the areas where fur seals spend time feeding are different from the areas they travel through without stopping.”

The findings also have broader implications for research on marine predators.

“Our successful Saildrone missions highlight how innovative technologies can expand our research capabilities. We can follow animals farther while also getting a closer look at their environment,” said Kuhn. “Innovations like unmanned surface vehicles will be valuable tools to help understand the environmental and biological features that drive the behavior and survival of marine species.”