Scientists across NOAA Fisheries are watching a persistent expanse of exceptionally warm water spanning the Gulf of Alaska that could send reverberations through the marine food web. 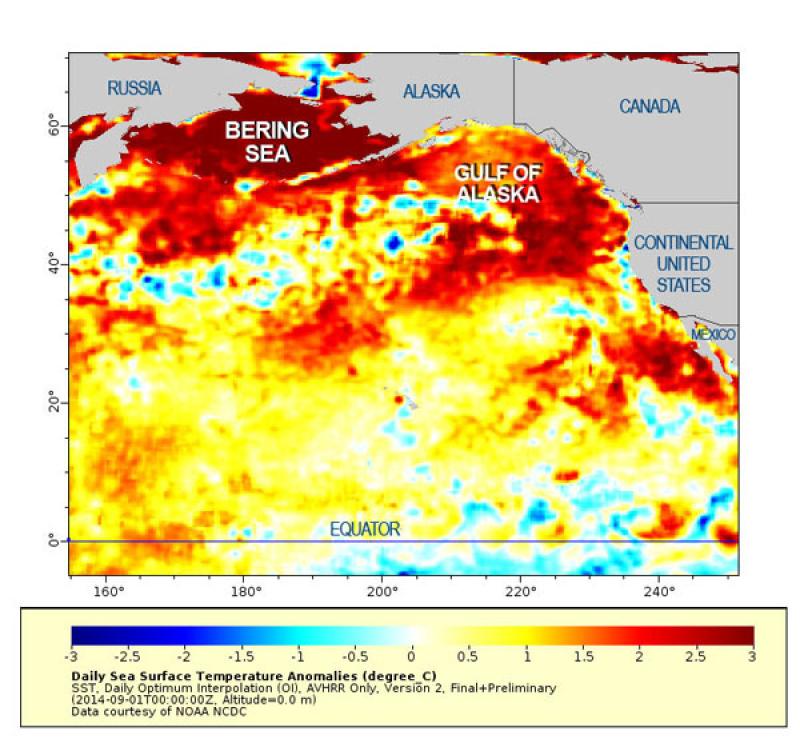 Unusually warm temperatures dominate three areas of the North Pacific: the Bering Sea, Gulf of Alaska and an area off Southern California. The darker the red, the further above average the sea surface temperature. NOAA researchers are tracking the temperatures and their implications for marine life.

Scientists across NOAA Fisheries are watching a persistent expanse of exceptionally warm water spanning the Gulf of Alaska that could send reverberations through the marine food web. The warm expanse appeared about a year ago and the longer it lingers, the greater potential it has to affect ocean life from jellyfish to salmon, researchers say.

"Right now it's super warm all the way across the Pacific to Japan," said Bill Peterson, an oceanographer with NOAA's Northwest Fisheries Science Center in Newport, Ore., who has linked certain ocean indicators to salmon returns. "For a scientist it's a very interesting time because when you see something like this that's totally new you have opportunities to learn things you were never expecting."

Not since records began has the region of the North Pacific Ocean been so warm for so long. The warm expanse has been characterized by sea surface temperatures as much as three degrees C (about 5.4 degrees F) higher than average, lasting for months, and appears on large- scale temperature maps as a red-orange mass of warm water many hundreds of miles across. Nick Bond of the Joint Institute for the Study of the Atmosphere and Ocean at the University of Washington earlier this summer nicknamed it " the blob."

Indeed, there are three warm zones, said Nate Mantua, leader of the landscape ecology team at the Southwest Fisheries Science Center: The big blob dominating the Gulf of Alaska, a more recent expanse of exceptionally warm water in the Bering Sea and one that emerged off Southern California earlier this year. One exception to the warmth is a narrow strip of cold water along the Pacific Northwest Coast fed by upwelling from the deep ocean.

The situation does not match recognized patterns in ocean conditions such as El Niño Southern Oscillation or Pacific Decadal Oscillation, which are known to affect marine food webs. "It's a strange and mixed bag out there," Mantua said.

One possibility is that the PDO, a long-lived El Niño-like pattern, is shifting from an extended cold period dating to the late 1990s to a warm phase, said Toby Garfield, director of the Environmental Research Division at the Southwest Fisheries Science Center. Mantua said the PDO may have tipped into a warm state as early as January of this year.

But both scientists noted that the observed warm temperatures are higher and cover more of the northern Pacific than the PDO typically affects. For all but the Gulf of Alaska, the warm waters appear to lie in a relatively shallow layer near the surface. The cold near-shore conditions in the Pacific Northwest also don't match the typical PDO pattern.

Warm ocean temperatures favor some species but not others. For instance, sardines and albacore tuna often thrive in warmer conditions. Pacific Coast salmon and steelhead rely on cold-water nutrients, which they may have found recently in the narrow margin of cold water along the Northwest coast. But if the warmth continues or expands Pacific Northwest salmon and steelhead could suffer in coming years.

"If the warming persists for the whole summer and fall, some of the critters that do well in a colder, more productive ocean could suffer reduced growth, poor reproductive success and population declines," Mantua said. "This has happened to marine mammals, sea birds and Pacific salmon in the past. At the same time, species that do well in warmer conditions may experience increased growth, survival and abundance."

Peterson recently advised the Northwest Power and Conservation Council that juvenile salmon and steelhead migrating from the Columbia River to the ocean this year and next may experience poor survival.

"The signs for salmon aren't good based on our experience in the past," Peterson said, "but we won't really see the signal from this until those fish return in a few years." The warm expanse in the Gulf of Alaska is a kind of climatic "hangover" from the same

persistent atmospheric ridge of high pressure believed to have contributed to California's extreme drought, Bond and Mantua said. The ridge suppressed storms and winds that commonly stir and cool the sea surface.

Other factors created the patch of warm water hugging the Central California Coast south to Baja California. A low-pressure trough between California and Hawaii weakened the winds that typically drive upwelling of deep, cold water along the California Coast. Without those winds waters off Southern California's beaches have stayed unusually warm.

Research surveys in the Gulf of Alaska this summer came across species such as pomfret, ocean sunfish, blue shark and thresher shark often associated with warmer water, said Joe Orsi of the Alaska Fisheries Science Center Auke Bay Laboratories in Juneau. He said temperatures in the upper 20 meters of water up to 65 kilometers offshore were 0.8 degrees C (about 1.4 degrees F) above normal in both June and July.

The potential arrival of El Niño later this year would likely reinforce the warming and its effects on marine ecosystems, Bond said. NOAA's National Weather Service estimates a 65 percent chance El Niño will emerge in fall or early winter.

Mantua noted that fall in California generally brings even weaker winds and weaker upwelling, making it likely that the warm waters off Central California will persist and even expand northward regardless of a tropical El Niño.