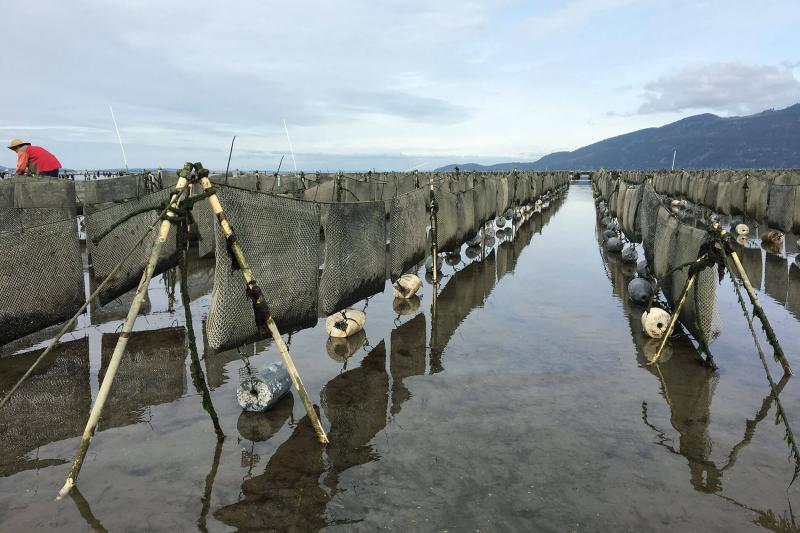 Oysters grow at a Washington oyster farm in "flip bags" at low tide. High tide submerges the bags and floats attached to each one raise them in the water column. Photo by Northwest Fisheries Science Center.

The underwater video scene is full of life. A school of sinewy fish darts across the screen while a crab rummages along the seafloor. A flatfish, camouflaged like the sandy bottom, doesn't seem to mind when the crab crawls over its back to approach an oyster.

Scientists from NOAA Fisheries’ Northwest Fisheries Science Center are collecting this video and more like it. They want to assess how marine life uses, and may even benefit from, habitat in and around farms growing oysters and other shellfish. They are teaming up with Microsoft to use computers and artificial intelligence to scan hours of video within seconds for different species of interest.

This particular video reveals the underwater landscape of Hama Hama shellfish farm in Hood Canal, Washington, one of many partners assisting with the study. Other local shellfish growers and the Pacific Shellfish Institute are also taking part.

“We collected the video as one way to assess how fish and invertebrates use shellfish aquaculture habitats compared to areas of the nearshore that don’t have aquaculture,” said Beth Sanderson, a Northwest Fisheries Science Center research scientist. Researchers collected the video over the past several years to assess the way species use, and feed in, different habitat types. 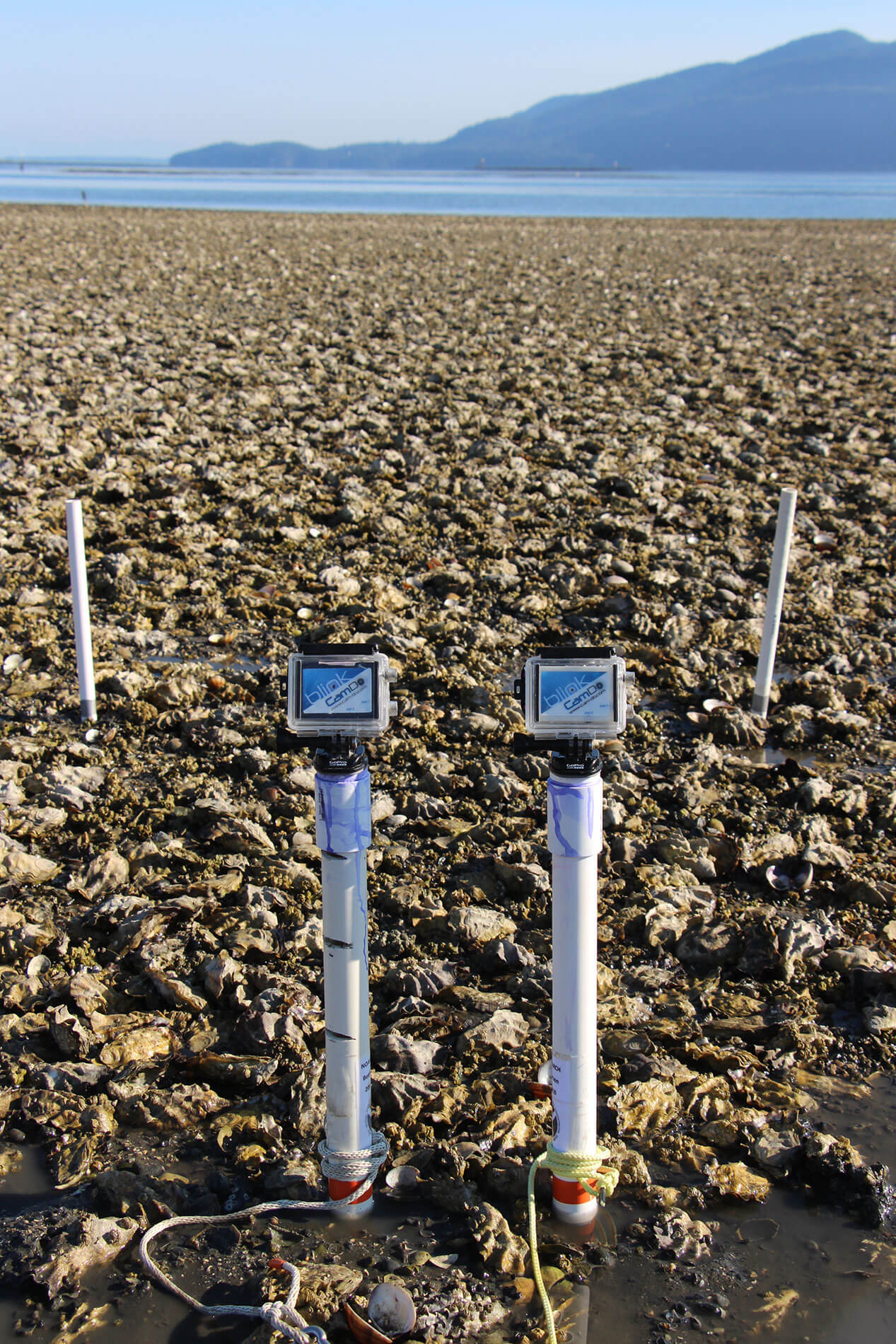 Two cameras stand above a section of an oyster farm in Samish Bay, Washington, at low tide. They become submerged at high tide and collect underwater video of marine life inhabiting the area. Photo by Northwest Fisheries Science Center.

Shellfish farming is one of the most valuable parts of the Northwest aquaculture industry. It generated close to $100 million annually for the regional economy and provides close to 1,500 jobs prior to the pandemic. Shellfish farms occupy more than 25,000 acres in the Northwest. Researchers and managers want to understand how farming practices affect marine life in the shallow and highly productive nearshore waters where oysters and other shellfish grow.

“We’ve seen basically all of the fish you’d expect in the nearshore—herring and other forage fish, varieties of perch and sculpin, juvenile salmon, along with diving ducks, harbor seals and more,” Sanderson said. “There’s an amazing variety of life in the shallows of the Pacific Northwest, and we are seeing for the first time how many of these species use habitats within and near shellfish farms.”

Research cameras capture video of different types of habitat, including eelgrass beds, bare sediment. It also shows areas where Manila clams and Pacific oysters grow on the sediment, and suspended in flip-bags. Scientists also collected video in nearby sites without shellfish gear to compare species use and feeding rates in the different surroundings.

“We’ve collected hundreds of hours of video, and it is time consuming to analyze the images, so we are teaming up with the Microsoft Artificial Intelligence for Good program to develop tools to automate the fish species data collection and analysis,” said Northwest Fisheries Science Center research scientist Peter Kiffney, who is leading the study with Sanderson.

Computers will rapidly scan video to locate fish or crabs. This will streamline the analysis by focusing on video segments with fish and crabs, quickly identifying their species and behavior.

Understanding what species and life stages of fish and crabs are using the habitat is a first step. Researchers also plan to analyze the diet of fish and crabs from the sites. This will allow them to better understand how shellfish farming affects the nearshore food web compared to sites without farming.

Researchers understand that oysters and clams in shellfish farms help remove excess nutrients such as nitrogen and phosphorus from nearshore environments. They also want to know more about how shellfish and gear affect marine life residing in and transiting farms. So the researchers are partnering with the Pacific Shellfish Institute to study shellfish farms on the West Coast, funded by the Pacific States Marine Fisheries Commission. 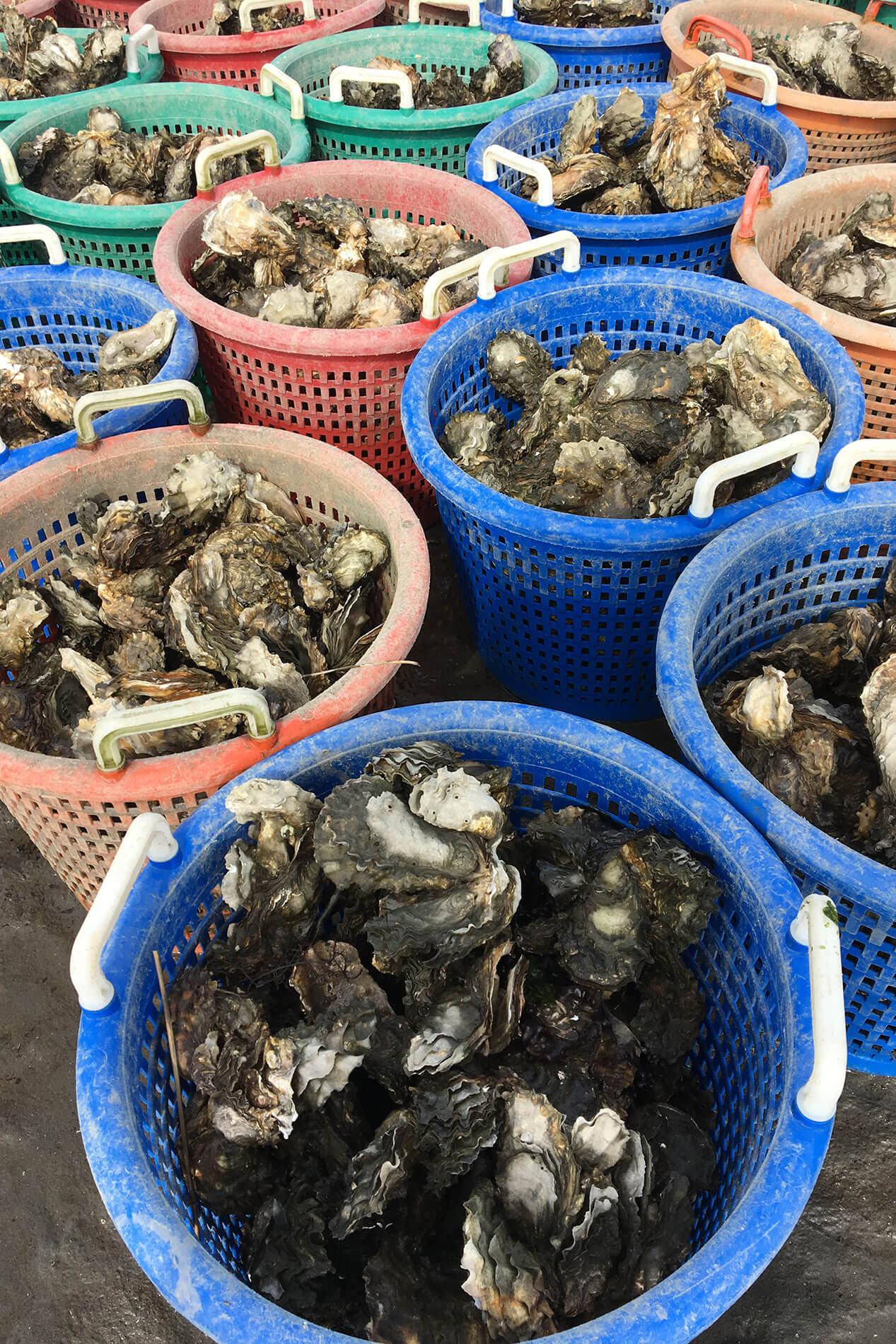 “Our current work, in partnership with the shellfish industry and a broad interdisciplinary team of scientists, will assess the value of habitats with various types of aquaculture operations for species such as juvenile salmon and Dungeness crab,” said Bobbi Hudson, executive director of Pacific Shellfish Institute.

The research will focus on how oyster cultivation methods affect eelgrass, which grows in the same shallow estuary habitat that is good for shellfish farming. Eelgrass beds fluctuate naturally, making it difficult to measure the effects of shellfish farming specifically. So the research partners and Washington Sea Grant will use drones to map shellfish farms and eelgrass beds to better examine the impacts of one on the other.

The research results will help managers of nearshore habitat understand the impacts, benefits, and tradeoffs of shellfish aquaculture so that it remains sustainable.