Using 15 years of NOAA’s Fisheries Observer Program data, Center scientists Tom Good and Jason Jannot worked with longline fishermen and vessel captains to study methods of reducing impacts to albatross and other seabirds in the U.S. West Coast sablefish fishery. Results of their research have been published in The next link/button will exit from NWFSC web site Fisheries Research. 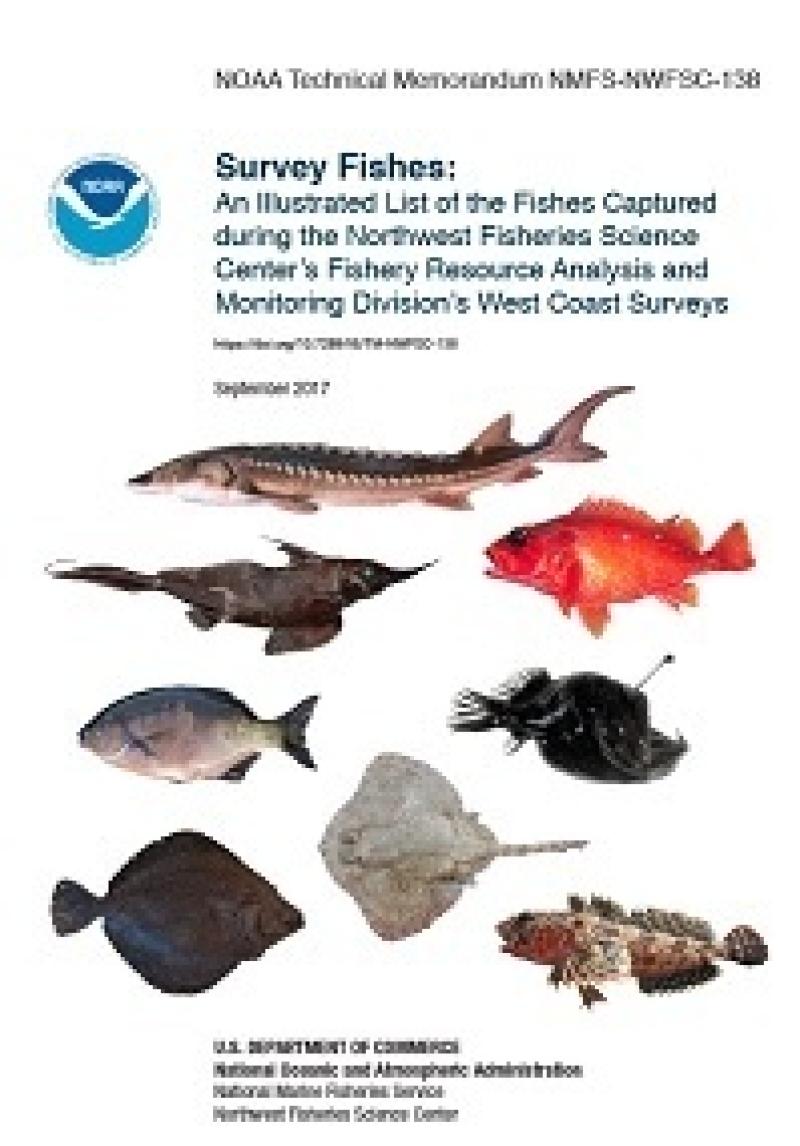 How to ID a Fish

Survey Fishes (PDF, 453 pages), just published as a NOAA Fisheries Technical Memorandum, is a comprehensive guide to just about anything you might catch anywhere along the U.S. West Coast—from bat rays to sea lizards, from fringeheads to arrowtails, from greenblotched rockfish to red Irish lords.

The author, Dan Kamikawa, is a Research Fisheries Biologist with the Fishery Resource Analysis and Monitoring (FRAM) Division at the Newport Research Station in Oregon.

“The idea was, we wanted to publish something we could use out on the back deck of a boat,” Dan said. “There are other guides, but they’re full of species we never see. This guide is keyed to what we’re most likely to find on our surveys. It’s meant to be useful for survey work, without being so technical that you need a Ph.D. to use it.”

The book is organized around a series of dichotomous keys, a type of index that proceeds in couplets to help readers identify fish to their species. The main key in the front of the book will help readers identify the family. More detailed descriptions, keys, and hundreds of photographs throughout the book help further refine the search.

Or as Dan put it, “You start at number 1, work your way through the keys, and if it’s there, you find your fish!”

A Career’s Worth of Knowledge

Dan has been with FRAM Division since 1995. A major portion of his job is to assist in the planning and conducting of the annual West Coast Groundfish Bottom Trawl Survey (PDF, 47 pages). During the field season that spans from late April through October, he spends 60–100 days at sea on various surveys off the West Coast and occasionally Alaska, collecting biological data on the fish and invertebrates captured in the survey nets.

Dan credits his extensive knowledge about these species to his early years conducting surveys with the Resource Assessment and Conservation Engineering Division of the Alaska Fisheries Science Center. It was during these surveys that he had the privilege of learning from some of the best taxonomists in the field. His new field guide represents the culmination of his work so far, a career’s worth of knowledge in one book.

The guide focuses on those species that have been caught in surveys. But the surveys may not have caught every species that’s out there yet. And with the variability of our changing oceans, new species may eventually pass through or move in from other parts of the ocean.

So what if someone catches or discovers a fish they aren’t able to identify using the guide?

“Send me an email!” Dan says. “I get requests to identify species all the time, from up and down the West Coast. Just take good clear photos, jot down any relevant information like where it was caught or found, and send it to me. I’ll do my best to get you an answer.”

Dan can be reached at dan.kamikawa@noaa.gov.