When a Right Whale Dies

When a right whale dies and we find it in U.S. waters, we work with stranding network partners to do a necropsy so that we can find out more about the whale and what caused its death. The right whale known as “Snake Eyes” likely died from entanglement. 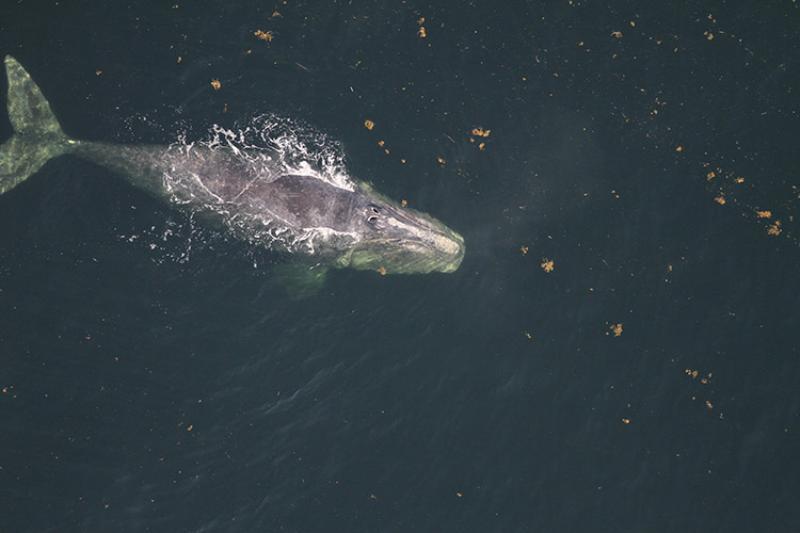 Around 3 p.m. on September 16, 2019, Atlantic Marine Conservation Society (AMSEAS) received a call about a very decomposed whale carcass. It was floating about 4 miles south of Fire Island Inlet of Long Island, New York. Dead whales floating in the waters off Long Island have been a fairly common occurrence over the last few years, mostly humpback and minke whales. When AMSEAS reported the call to us at NOAA Fisheries, we were prepared to assist with what has now sadly become somewhat routine response planning. 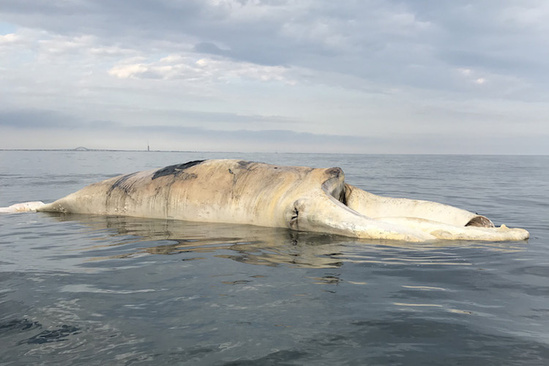 Response planning involves a series of coordination calls. We need to:

Our role in these cases is primarily to provide logistical and resource support to the authorized response organizations on the ground.

We joined a 4 p.m. call with representatives from AMSEAS, New York State Department of Environmental Conservation (NYS DEC), U.S. Coast Guard, New York State Office of Parks, Recreation and Historic Preservation, and Fire Island National Seashore. While we were on the briefing call,  some photos came in from the boater who first reported the carcass.

It didn’t take long for Ainsley Smith, marine mammal stranding coordinator for the Greater Atlantic Region, to review the photos. She said to the group, “Those look like paddle-shaped flippers to me.” Our hearts collectively sank, as that meant we probably had a dead North Atlantic right whale on our hands.

If they were indeed paddle-shaped flippers, this would be the first known right whale mortality observed in U.S. waters for 2019. It would come at a time when tensions are running high over pending regulations for fisheries to help reduce the threat of entanglement in fishing gear.

North Atlantic right whales are endangered, with only about 400 remaining. Each death puts the species more in peril. In the last three years, 30 right whales are known to have died, both in U.S. and Canadian waters.

Right whales were recently added to NOAA’s Species in the Spotlight initiative to bring needed resources to the fight to bring this species back from the brink. Because right whales are endangered, it’s very important that we take every opportunity to gather as much information from the carcass as we could. This helps us learn not only about this whale and how it died, but also more about right whales generally.

By 6 p.m., we had received additional photos from NYS DEC, and experts were able to confirm that this was in fact a North Atlantic right whale. All of the partners worked together to develop a plan to tow the carcass to shore to do as much of a necropsy as possible, given the state of decomposition. AMSEAS, our stranding network partner on Long Island, would help find the whale in the morning. They would lead the necropsy team once the whale carcass made landfall.

Necropsy team members from the Center for Coastal Studies and the International Fund for Animal Welfare, both on Cape Cod, Massachusetts, started making their way south. AMSEAS gathered local volunteers and supplies. The plan was for Rob DiGiovanni, Chief Scientist and founder of AMSEAS, to leave with a NYS DEC vessel at first light. They hoped to find the whale carcass, which might make landfall overnight; if it didn’t, they would tow it to a nearby beach.

The next morning, it became clear that the carcass did not make landfall. At the 9:30 a.m. coordination call, the whale was nowhere to be found. Time for Plan B: Call U.S. Coast Guard and Center for Coastal Studies about doing some aerial surveillance. Before we got too far down that road, we received word that the NYS DEC vessel had found the whale south of Jones Beach, several miles east from its original location. It was in very bad condition, with baleen missing. Towing the carcass would have to be done slowly, so as not to lose even more of the whale. 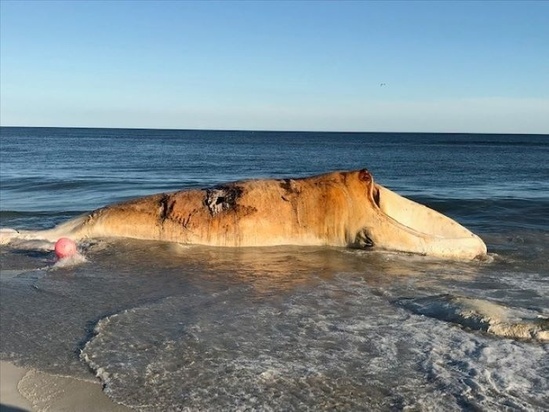 “The process of towing a large whale to shore is an example of how something that seems really simple can take a lot of complex planning, time, and effort,” says Rob DiGiovanni. “While it took approximately six hours to transport the whale 10 miles, it was well choreographed, as these events need to be. The team we worked with, which included two vessels from NYS DEC and SeaTow, had a lot of experience. All of the working parts came together and allowed us to bring the animal in before nightfall."

By 4:45 p.m., the whale was secured on the beach in preparation for a necropsy the following day.

A necropsy team of approximately 17 scientists and trained volunteers, led by AMSEAS, started the necropsy around 9 a.m. They took measurements and samples of various tissues and organs according to established protocols. They finished their examination and sampling a little before 2 p.m., after which the carcass was buried.

“Necropsy examinations are essential to marine conservation,” said AMSEAS necropsy program coordinator Kimberly Durham. “Uncovering what is impacting various marine mammal species, especially those that are endangered, can help us understand what actions need to be taken to mitigate concerns of these threats. We had a large necropsy team of both scientists and volunteers for this response, which really highlights the importance and severity of this species’ status in our marine environment." 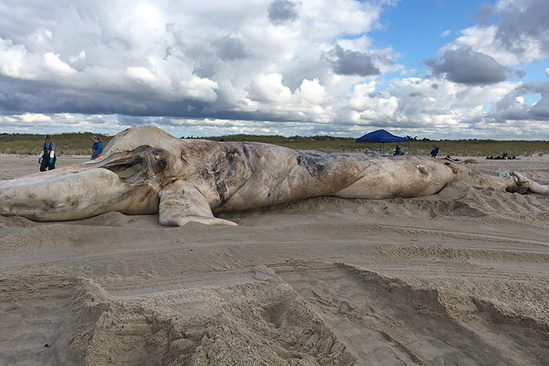 From the photos taken on the beach, scientists at the Center for Coastal Studies and New England Aquarium were able to identify this whale as Snake Eyes, #1226. Snake Eyes had been named for two bright white scars on the front of his head that looked like a pair of eyes. Biologists knew Snake Eyes well, having seen him dozens of times over the years.

He was a male, approximately 40 years old. Snake Eyes was last seen entangled in the Gulf of St. Lawrence this summer, on August 6, after being seen there gear-free on July 16. This was his first sighting since the entanglement.

After a few weeks of analysis, the necropsy team was able to release a preliminary findings statement regarding the cause of death. The necropsy report details multiple linear wounds wrapping the rostrum (head) and both pectoral flippers, and to the flukes (tail). The wounds on the flukes and rostrum were consistent with those documented from the August 6 entanglement while Snake Eyes was alive. The necropsy found no evidence of blunt or sharp trauma that would indicate a vessel strike. While the internal organs were significantly decomposed, there was no sign of disease.

The team concluded that, “Based on the severe entanglement history, supporting gross necropsy findings, and absence of detectable vessel trauma or natural disease, it was determined that the likeliest cause of death for this animal was probable entanglement.”

It’s always sad to lose a member of an endangered population, but it’s important to understand as much as we can about how and why it died. This information helps us as we work towards recovering the species.

Thank You to All Our Partners

We thank all the partners involved for assisting with the location, recovery, and necropsy of this whale: