Where the Wild Things Are: Looking for Reef Predators in Deeper Waters 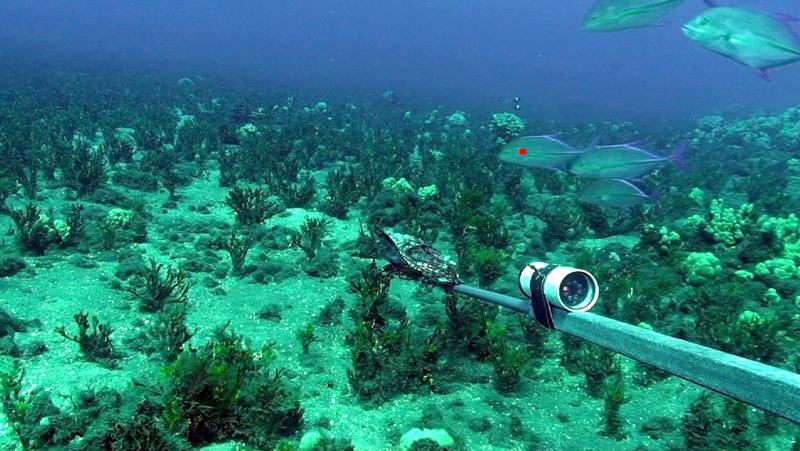 The stocky builds of giant trevally (ulua), blue fin trevally (omilu), yellow spot jack (papa ulua), and green jobfish (uku) are testament to their known fighting abilities. On account of their taste at the table, these fish are popular among Hawaiian recreational and subsistence fishermen. These jacks and snapper, as well as other top-tier coral reef predators such as sharks, are well studied in shallower Hawaiian waters that can be accessed by open-circuit scuba divers. 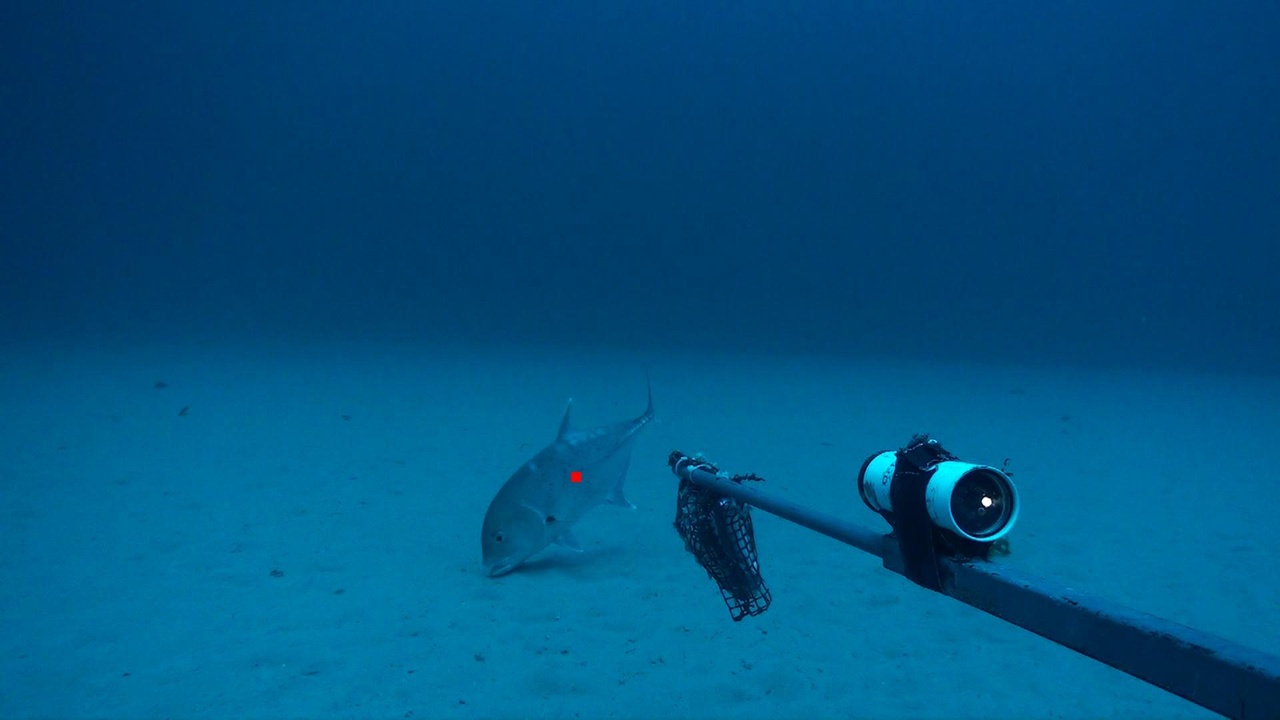 A solitary giant trevally or ulua (Caranx ignobilis) searches for prey along a mesophotic sand flat off the coast of Oahu (Photo: NOAA Fisheries).

Deeper "mesophotic" areas beyond traditional scuba diving depths have been restricted to complicated, expensive, and/or hazardous scientific survey approaches. The term mesophotic comes from the words: "meso" meaning middle, and "photic" meaning light. The coral reefs found at depths between 100 and 490 feet deep (and maybe more) are referred to as mesophotic coral ecosystems.

Recent advances in electronics, the availability of smaller, cheaper, off-the-shelf video cameras, and waterproof housings have made accessing deeper reefs off the coast of Hawaiʻi possible. Just add a bit of bait in front of the camera, and you're "fishing with video"!

Our new research published in Nature Scientific Reports shows that the different species that form coral reef predator populations shifts dramatically when moving from shallow water to mesophotic depths of ~330 feet in both the main Hawaiian Islands and the Northwestern Hawaiian Islands—protected by the Papahānaumokuākea Marine National Monument. 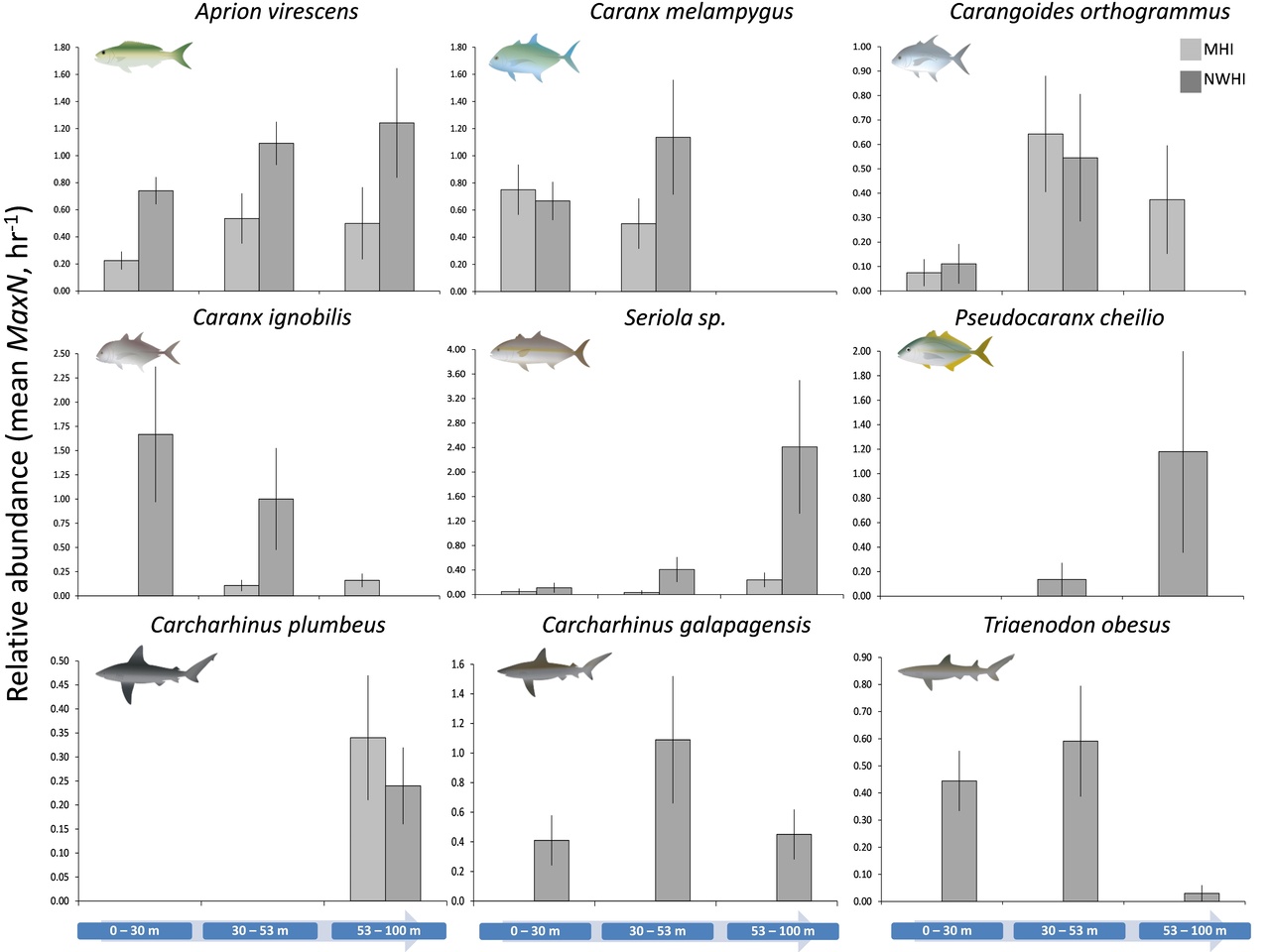 Predators associated with coral reefs were also found in surprising places, such as seemingly deserted sand flats, on which research was not overly focused in the past. In the Maui-nui area, ulua, papa ulua, and omilu were commonly sighted, along with a couple of large schools of juvenile bottomfish (opakapaka) and the occasional tiger shark (niuhi), in mesophotic sand flats hosting large meadows of the calcified green algae, Halimeda.

In the Northwestern Hawaiian Islands, the abundance of certain predators like ulua and omilu would fall away at greater depths, while the numbers of amberjack and almaco jack (kahala) and thicklipped jack (butaguchi) would rise, with the occasional yellowtail and opakapaka mixed in even as habitats shifted to lower-complexity sand or rubble flats from the more structurally-complex reefs above.

Read more: "An Assessment of Mobile Predator Populations along Shallow and Mesophotic Depth Gradients in the Hawaiian Archipelago" (published in Nature Scientific Reports).

This work expands upon another study, "Mesophotic Depth Gradients Impact Reef Fish Assemblage Composition and Functional Group Partitioning in the Main Hawaiian Islands," which focused on how reef fish communities structure themselves from shallow to mesophotic depths in the main Hawaiian Islands (published in Frontiers in Marine Science).