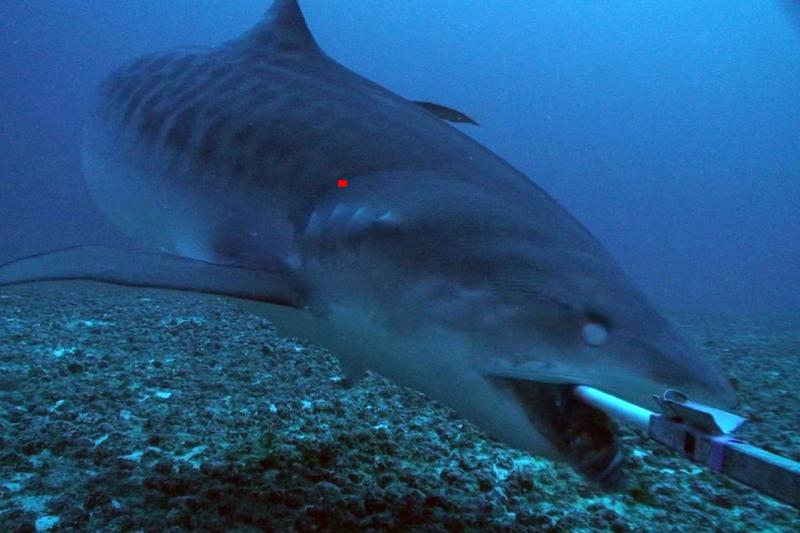 A tiger shark tries to take a bite out of the bait bag and camera rig. Credit: Jake Asher/NOAA Fisheries.

Highly trained scuba divers explore Hawaiian coral reefs each year, counting fishes and sharks via shallow water visual census. For safety and logistics reasons, divers using open-circuit SCUBA do not typically conduct surveys deeper than ~30 meters. However, Hawaii’s mesophotic (light-dependent) reefs extend to at least 150 meters below sea level, and many shallow water species are also found in those mesophotic habitats. As a result, shallow water visual censuses miss a significant portion of the populations of some fish and shark species.

Jake Asher is a Pacific Islands Fisheries Science Center biologist who studies these populations and their complex relationships. He recently published two papers examining how reef fish and roving predator populations change, not only in relation to depth but also in terms of geographic extent and habitat type.

Asher and his colleagues in the Ecosystem Sciences Division wanted to assess predator and prey populations below the shallow waters where divers can effectively work, so they deployed portable underwater camera systems equipped with bait bags to do the work for them. The camera systems are comprised of two Sony Handycams on a metal frame, a diode to synchronize the cameras, and a bait bag attached to a pole extended in front of the cameras.

Scientists pack bait bags with Japanese sanma, an oily fish species widely used as an attractant in underwater video sampling throughout the Pacific Ocean. The bait bag attracts a variety of marine life from the surrounding area, giving scientists a better understanding of the ecosystem as a whole, but Asher explained there are a few biases to account for when using bait bags for scientific surveys.

An octopus, known as "tako" in the Hawaiian language, takes an interest in the bait bag. Credit: Jake Asher/NOAA Fisheries.

“In remote areas versus populated areas, you’re assuming you have essentially the same attraction effects,” Asher said. “So, although there are biases associated with baiting, it’s a universal bias.” This universal bias allows for consistent data comparison between the main Hawaiian Islands, the Northwestern Hawaiian Islands, and other Pacific Islands territories.

“We also compared baited versus unbaited camera stations at the same locations,” Asher said. “And what we’re finding, to a large degree, is that the unbaited stations are good for getting snapshots of reef fishes that are largely site-attached, but that mobile and wide-ranging species, such as large predators, tend to be missed. Also, a lot of people worried that herbivores would not show up to baited surveys, but it turns out that’s not an issue at all.”

In fact, more herbivorous fish appear when bait bags are present compared to when they are not. It could be that bait bags create a hive of activity and nearby herbivores are merely curious to see what is going on, but additional observation is required to be sure.

Already these camera systems have proven tremendously valuable, producing hundreds of hours of footage that researchers are using to answer a range of questions. For instance, Asher was curious about the noted absence of large coral reef predators around the main Hawaiian Islands.

A large tiger shark attacks the bait bag while simultaneously using it as a backscratcher. Credit: Jake Asher/NOAA Fisheries.

Asher suggests that some predator species may be utilizing mesophotic habitats as potential depth refuges—lower depths where they can more easily avoid the effects of human activity. “As we go deeper, some predators become more abundant and larger in size, particularly around the main Hawaiian Islands,” Asher explained. “Some of this could be related to life cycle, but when we’ve compared the main Hawaiian Islands to the Northwestern Hawaiian Islands, which are unfished, there’s at least some evidence to suggest there is protection from fishing in deeper strata for the simple reason that it takes more effort to pluck fish out of those depths.”

A school of jacks swarm around the bait bag. Credit: Jake Asher/NOAA Fisheries.

Asher conducted video surveys between 0 and 100 meters and found that roving predator communities differed greatly between the main and Northwestern Hawaiian Islands. In the Northwest, where Papahānaumokuākea Marine National Monument protections prohibit fishing, his team sampled 10 times more jacks and five times more sharks than in the main Hawaiian Islands.

Camera systems also allowed Asher to inspect habitats that otherwise would not have been included in survey programs. “What originally gave me a bit of heartburn turned out to be an opportunity,” Asher explained. “Initially, I wanted to only target hard-bottom substrate (coral reefs and similar habitats), but around the Hawaiian archipelago, you have all these sand flats and the deeper you go the patchier the hard-bottom substrate becomes, and the habitat information was far from complete at the time I was starting this research. In some cases, even if the boat was over hard-bottom habitat, when we deployed the camera the ocean current would take it on the way down and carry it over to sand flats.”

“When people look at sand flats they might think they’re like a barren desert, but that’s not the case,” he said. “The original intent was to cut these sites out because they’re not comparable to reef habitat, but now we think there is a lot of important information to be gathered from there.”

In this video, a stingray attempts to feed on the bait bag. Credit: Jake Asher/NOAA Fisheries.

Next, Asher would like to extend the depth range of this camera research to examine reef and sand flat habitats down to 150 meters. “There’s at least another 50 meters to explore, but beyond that you’re getting into bottomfish and abyssal depths,” Asher said. Fisheries stock assessment teams are studying seven bottomfish species (known as the “Deep 7”) at those depths and at some point, Asher said, they would like to merge their data and see how larger fish communities are interacting across strata.

To learn more about this research, check out this article from the Pacific Islands Fisheries Science Center.

Last updated by Office of Communications on May 17, 2019