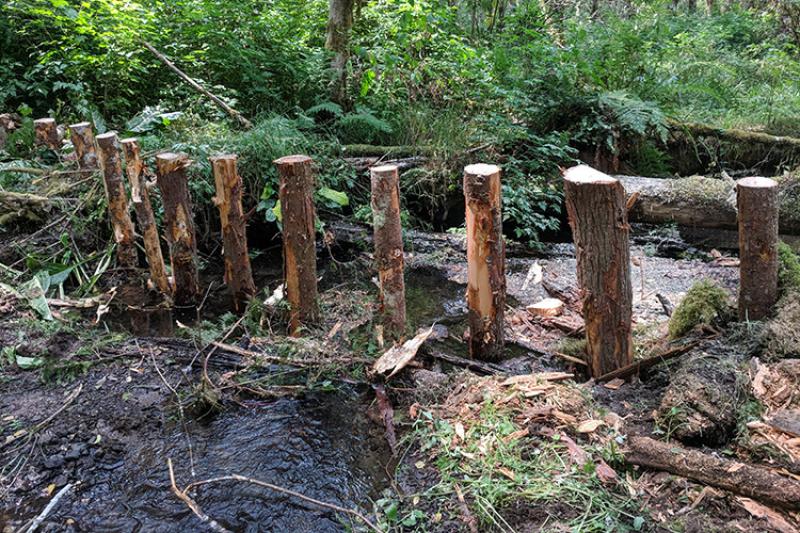 On the Oregon coast, NOAA and partners are leveraging the strong engineering skills of their beloved state animal to restore important habitat for threatened coho salmon and other species.

Supported by NOAA, our partners at the Wild Salmon Center and Upper Nehalem Watershed Council are embarking on a pilot project. It will assist beavers with building dams in key areas of tributaries where juvenile migrating fish grow. Once built, beaver dams create slower moving sections of streams for juvenile fish to use as habitat. 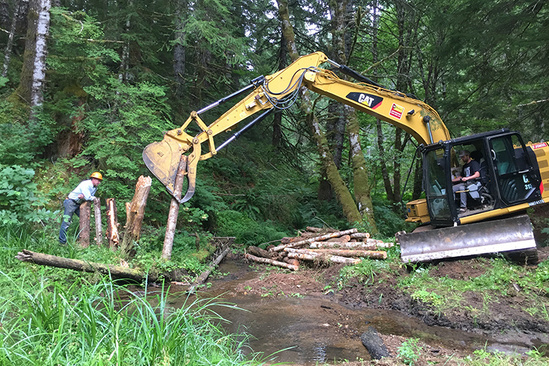 To construct the beaver dam analog, a row of wooden posts is anchored upright in the stream bed.

Similar to estuaries and river delta habitats, the slow-moving pools of water behind beaver dams offer juvenile salmon critical time for feeding and growing before their trip to the ocean. Unlike man-made barriers to fish passage, adult salmon are able pass beaver dams when they migrate back upstream to spawn.

With these pilot projects, NOAA and partners are building foundation structures, called “analogs.” They are placed in areas where beavers once lived, and where the stream grade and size are optimal for juvenile salmon habitat. Think of them as the foundations of a home. 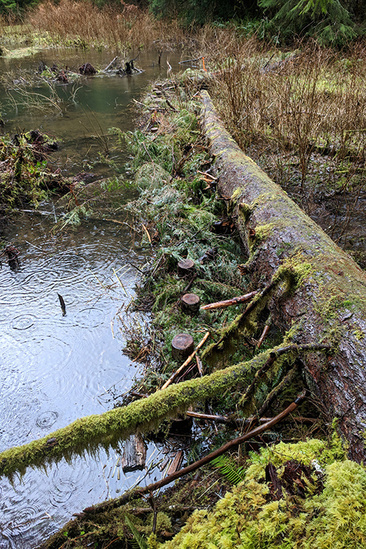 Once we introduce the analogs to ideal areas, beavers find them and build out the rest of their new homes. Rows of wooden posts intertwined with tree branches and straw give our furry restoration partners a solid foundation from which to start building their dams. We also ensure they have plenty of food sources by planting willows and other tasty foods beavers like while removing invasive plants from the areas.

These innovative but simple projects are turning back the clock to times where beavers freely built dams along streams and rivers in Oregon watersheds. Modern development has straightened stream channels and increased the amount and speed of water flow. This makes it hard for juvenile salmon to rest during freshwater stages of their early lives. This habitat loss for beavers and salmon has created population declines for both species.

These pilots are one piece of a larger effort, the Oregon Coast Coho Recovery Plan, to restore Oregon Coast coho salmon habitat. We are providing funding and technical support to the Wild Salmon Center to implement a series of habitat restoration projects across the Oregon Coast. We are working with a variety of partners including local and state governments, non-profit organizations, tribes, and other federal agencies. Together these coordinated efforts are targeting restoration where it will have the greatest benefit and make the biggest impact for threatened coho salmon.

Last updated by Office of Habitat Conservation on January 06, 2022