The whale most likely died as a result of being entangled in gear and drowning, according to the information scientists obtained from the necropsy. 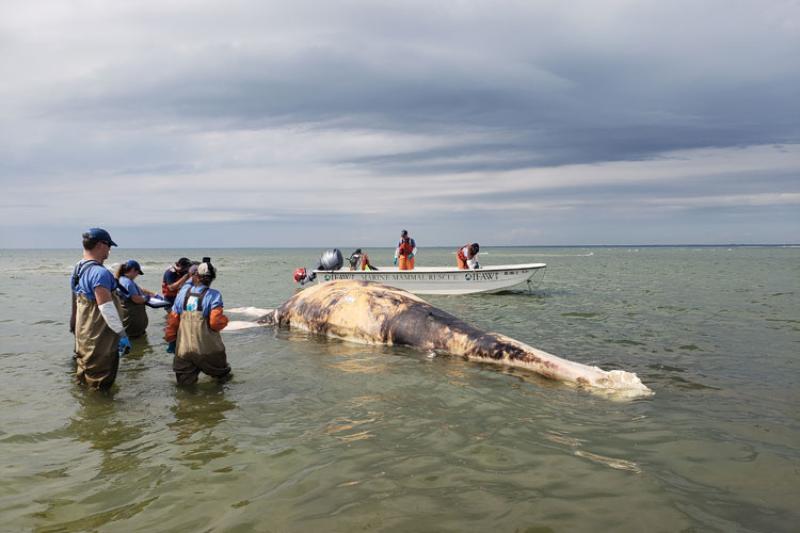 The North Atlantic right whale carcass that was first reported floating off Martha's Vineyard on Monday, August 27, was necropsied on August 30 by IFAW. The whale most likely died as a result of being entangled in gear and drowning, according to the information scientists obtained from the necropsy.

The male right whale was approximately 9 meters (30 feet) in length, which would make the whale about a year and a half old, and likely was one of the five calves born over the 2016-2017 season. 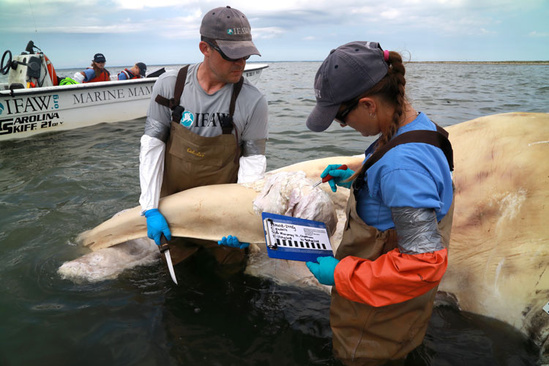 While this whale was moderately decomposed and parts of the carcass were missing, the necropsy team documented 11 lesions, including several linear depressions and bruises that are consistent with entanglement in line, particularly around the right flipper. There was also significant shark predation on the carcass, which appears to have happened post-mortem.

The team took samples from various tissues and organs for further analysis, including any signs of infection or disease. However, given the bruises on the body, the necropsy team concluded that this whale likely died as a result of entanglement. No gear was present on the whale.

In 2017, NOAA confirmed 17 North Atlantic right whale deaths--about 4 percent of their population--an alarming number for an endangered species with a population estimated at about 450 animals. In 2018, there have been two confirmed right whale mortalities. There are currently only about 100 females of breeding age in the population and more females seem to be dying than males. Births have also been declining in recent years, and no new calves were spotted in the calving grounds off Florida this year.

In August 2017, NOAA Fisheries declared the increase in right whale mortalities an Unusual Mortality Event which helps the agency direct additional scientific and financial resources to investigating, understanding, and reducing the mortalities in partnership with the Marine Mammal Stranding Network, Canada's Department of Fisheries and Oceans, and outside experts from the scientific research community.