In 2016, NOAA Fisheries received a petition to list Pacific bluefin tuna as threatened or endangered under the Endangered Species Act. NOAA Fisheries has since announced its final determination on the petition and provided a 12-month finding of information. Below are frequently asked questions regarding this finding.

On June 20, 2016, NOAA fisheries received a petition to list Pacific bluefin tuna (Thunnus orientalis) as threatened or endangered under the Endangered Species Act.

On October 11, 2016, we announced that the petition presented substantial scientific or commercial information indicating that the petitioned action may be warranted and that we were initiating a status review. 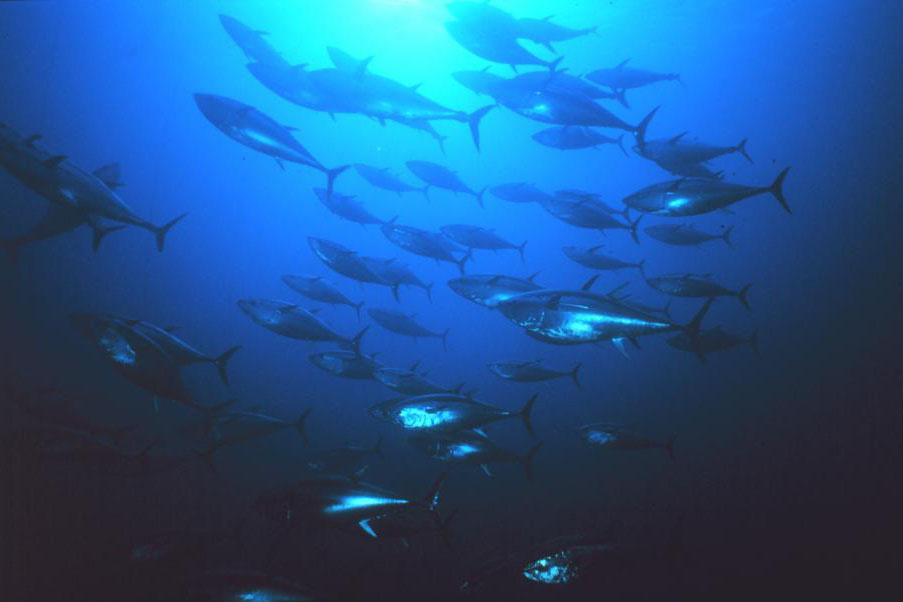 Why don't you think the Pacific bluefin tuna is at risk of going extinct?

A team of scientists conducted a comprehensive review of the current status of Pacific bluefin tuna based on the latest science and including information presented by the petitioners. This included an evaluation of 25 distinct threats to the species. While the Pacific bluefin population is near historical lows, the estimated abundance is now more than 1.6 million individuals with at least 143,000 mature adults as of 2014. The scientific team, called the Status Review Team (SRT), concluded that this number of mature reproductive animals is sufficient to protect against the risk of small population effects.

The Status Review Team recognized the challenges of managing this highly migratory species that spans international boundaries but concluded that the management changes adopted in 2014 effectively address concerns about overexploitation by commercial fishing. In particular, fishery management changes adopted in recent years are expected to reduce the harvest of smaller fish, allowing more fish to grow to maturity. The most recent stock assessment of Pacific bluefin tuna also projected population increases across several management and recruitment scenarios, indicating that the species is now on a positive trajectory.

What information did NOAA Fisheries consider in deciding whether to lit the species?

Our decision is based on the best scientific and commercial data available, as required by the Endangered Species Act. We reviewed materials presented by the petitioners, information we received in response to the 90-day notice, and analyses by scientists from NOAA Fisheries' Southwest Fisheries Science Center who have expertise in both the species and stock assessment science and include some of the nation's top researchers on the topic.

The Team concluded that the overall risk of extinction is low. Several factors contributed to this conclusion, including the large number of mature fish coupled with the overall population size, as well as the fact that the Pacific bluefin population has recovered from similarly low abundance levels in the past.

A separate team of NOAA Fisheries scientists and managers assessed the Team's conclusions regarding the current and projected status of the species in light of criteria outlined by the Endangered Species Act. We concluded that Pacific bluefin tuna faces an overall low risk of extinction and that it is not currently in danger of extinction nor likely to become so in the foreseeable future, and as such, it does not warrant listing as a threatened or endangered species under the ESA.

What is the biggest threat to the Pacific bluefin tuna's existence?

NOAA Fisheries found that most potential threats posed a low risk to the population but commercial fishing presented the greatest threat. NOAA Fisheries considers the population both subject to overfishing (exploitation rate too high) and overfished. Overexploitation in international fisheries is considered to be a moderate threat over the short and long-term time frames. The threat mitigated in part by recent international agreements and management changes adopted to reduce the impact of commercial and recreational fisheries, particularly the impact on younger fish. Most members of the Status Review Team concluded that the management changes will help reduce landings and rebuild the Pacific bluefin population. Climate change is also considered to be a moderate threat over the long term. Ultimately, the Team considered all of these threats and concluded the risk of extinction for the species was low in both the short and long term. 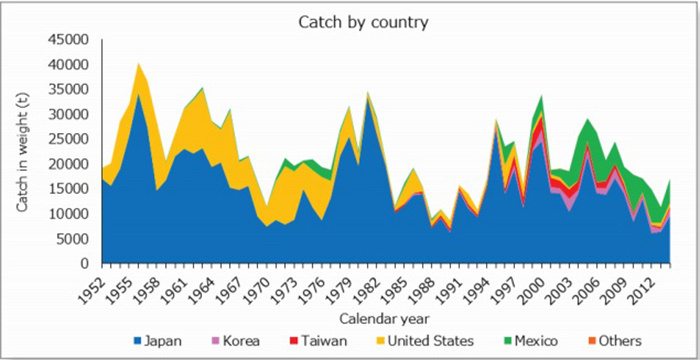 Did the Status Review Team highlight any research needs?

The Team identified further research that would provide more certainty in assessing risks to Pacific bluefin tuna. The research would improve understanding of bluefin biology as well as help fine-tune future stock assessments. Topics that warrant further research include—

NOAA Fisheries will consider these suggestions in planning future research.