Pound nets are a series of nets anchored to the bottom perpendicular to shore and are set in nearshore areas.

Pound nets consist of a fence leader that interrupts the movements of target species and a heart that funnels fish into the trap (pound) via a no return mesh tunnel. The series of nets are anchored to the bottom perpendicular to shore and are set in nearshore areas, with depth often increasing toward the pound.

The netting usually reaches above the waterline with the pound open at the surface. Pound nets are harvested by concentrating the catch in one corner and removing it with a dip net. The leaders may be as long as 1,300 feet (400 meters) with pounds measuring 160 square feet. 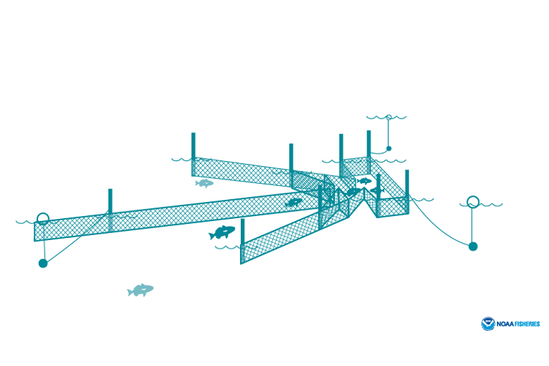 Populations of loggerhead, Kemp's ridley, and leatherback sea turtles are at risk in areas where pound net fishing is abundant, such as the Chesapeake Bay and surrounding waters.

Sea turtles may become entangled in any portion of the pound net, most commonly around their head and front flippers. Entanglements can result in bodily injury or drowning.

Entrapment occurs when a sea turtle finds its way into a pound net but cannot get out.

Sea turtles may also become pinned against the netting in a fast moving current and drown if they cannot free themselves.

Small coastal cetacean species, such as bottlenose dolphins, can become entrapped and or entangled in pound nets.

The mesh netting of leaders can act like a gillnet and entangle dolphins. Because the nets are often at or near the surface, cetaceans may be able to breathe until they are released. Once an animal is caught, stress may lead to bodily injury, with strong currents often complicating entanglements.

Regulations require modified leaders (composed of stiffer materials) to be set more than 10 feet from the low waterline during the summer to reduce turtle bycatch in Virginia. Use of stiffer materials in the leaders has likely lowered dolphin entanglement as well.