A purse seine is a large wall of netting deployed around an entire area or school of fish.

A purse seine is a large wall of netting deployed around an entire area or school of fish.

The seine has floats along the top line with a lead line threaded through rings along the bottom. Once a school of fish is located, a skiff encircles the school with the net. The lead line is then pulled in, "pursing" the net closed on the bottom, preventing fish from escaping by swimming downward. 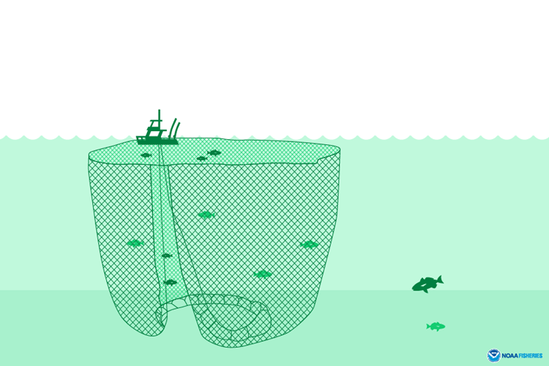 The catch is harvested by either hauling the net aboard or bringing it alongside the vessel.

Throughout U.S. waters, including Alaska and Hawaii.

Purse seining is a non-selective fishing method that captures everything that it surrounds, including protected species.

Sea turtles can be captured by a purse seine as it is set and then become entangled in the net mesh as it is hauled in. Entangled turtles may sustain injuries to their flippers and shells due to the force of the net as it is hauled.

In a large catch, turtles risk being crushed under the sheer weight of the tow. Captured turtles can be released alive if they are quickly retrieved and removed from the net.

Purse seines can easily encircle marine mammals along with target species as the net is set.

Once the netting has been set, encircled marine mammals cannot escape and can become entangled, injured, or stressed. Even with quick retrieval, marine mammals' sensitive bodies and internal organs cannot usually withstand the weight of the catch or the impact of being placed on the vessel.

In U.S. fisheries, species most commonly captured include bottlenose dolphins and humpback whales.

Employing fisheries observers who scan the water prior to setting nets is the most effective way of minimizing incidental capture.