Traps and pots are submerged three-dimensional wire or wood devices that permit organisms to enter the enclosure but make escape extremely difficult or impossible. 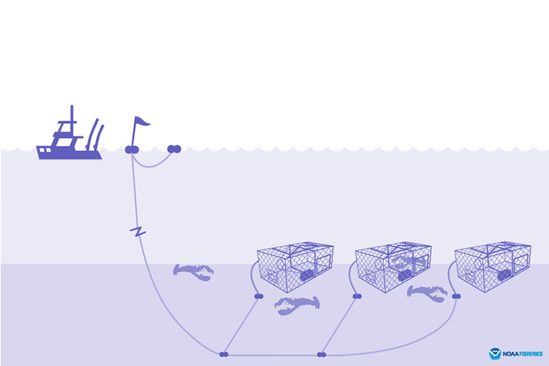 Traps and pots are submerged three-dimensional wire or wood devices that permit organisms to enter the enclosure but make escape extremely difficult or impossible.

Bait is commonly secured in the trap to lure organisms inside, where they wait until fishermen return to retrieve the catch and re-bait the traps.

Most traps are attached by a rope to a buoy on the surface of the water. Traps can be set individually or in a long continuous series, called trawls, at depths up to 2,400 feet (730 meters). Gear size, configuration, and hazards to protected species differ depending on target species.

Throughout U.S. waters, including Alaska and Hawaii.

The vertical lines running from the trap to the surface buoy can entangle sea turtles, particularly leatherback turtles, around the flippers, neck, or carapace. If traps are heavily weighted, turtles can drown because they cannot reach the surface to breathe.

Some fishermen attribute broken or disfigured pots and traps to sea turtles that have attempted to eat the bait or catch inside. However, these depredation attempts do not commonly lead to injury or entrapment.

The lines connecting traps to each other (groundlines) or to the surface buoy (vertical lines) can entangle marine mammals. Large or small cetaceans can become entangled around their bodies and fins, leaving lacerations that can lead to infection. Large whales, including endangered North Atlantic right whales, humpback whales, fin whales, and grey whales, are particularly susceptible to becoming entangled in trap or pot gear due to spatial overlap with fisheries and their feeding behavior.

The effects of entanglement can range from no permanent injury to serious injury and death. If the traps are weighted down, entangled whales and dolphins can drown if they cannot reach the surface to breathe.

Culling rings may be added to a section of a trap or pot to allow undersized animals to escape, but this approach does not minimize injury to marine mammals or turtles.

Weak links and breakaway lines are fishing gear modifications that can minimize injury and mortality by allowing the animal to break free from the gear and reach the surface to swim away with minimal trailing lines.

The use of sinking groundlines between traps instead of floating groundlines, that arc up into the water column, also minimizes the risk of entanglement.