2016 Species in the Spotlight Hero Awards

In 2016, we recognized these heroes who have expanded and enhanced recovery of our most imperiled marine species. 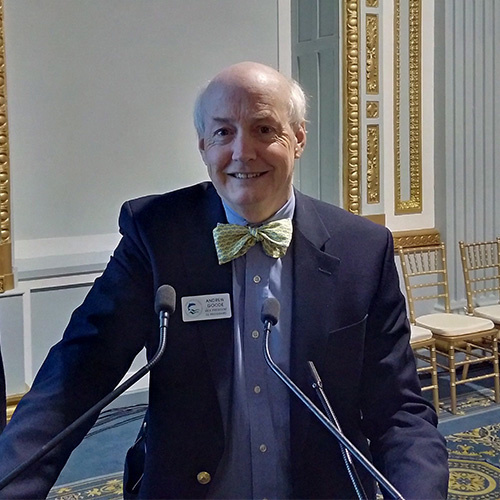 Andy Goode, Vice President of U.S. Programs for the Atlantic Salmon Federation, has been a leader in negotiating dam removals throughout the state of Maine. He was instrumental in negotiating and implementing the Penobscot River Restoration Project. The project removed two mainstem dams on one of the last remaining Atlantic salmon rivers in the United States.

Most recently, he successfully negotiated the removal of Coopers Mills Dam on the Sheepscot River. The dam had been a significant obstruction to Atlantic salmon. It was a thorny problem for which non-governmental organizations, the local community, and state and federal partners have tried to find a collaborative solution for more than 20 years. The issues with this dam were further complicated because the river was used as a water source for local firefighting. It also had important cultural connections to the community.

Through perseverance, partnerships, and hard work, Andy negotiated a compromise. The solution creates a visitor’s area that memorializes the cultural and historical significance of the structure and ensures a water source for firefighting. Above all, it allows for free passage of Atlantic salmon by removal of the dam.

Because of Andy’s efforts in this restoration project and others, critically endangered Atlantic salmon will benefit from improved connectivity to important habitats vital to their recovery. 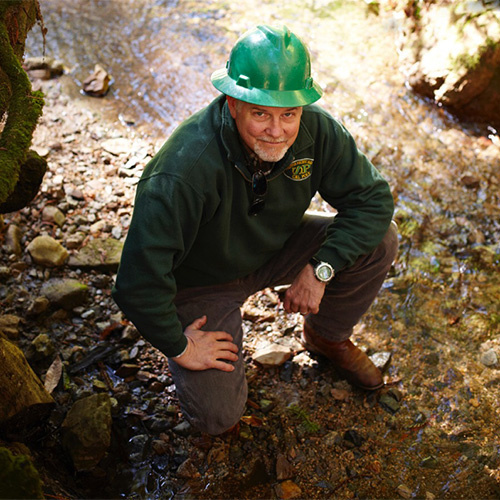 Dr. Brian Dietterick is the director of the California Polytechnic State University Swanton Pacific Ranch and a watershed hydrologist by training. The Ranch is located in the Scott Creek watershed of Santa Cruz County, California. It is a CalPoly educational facility and home to the southern-most extant population of coho salmon.

Over the last decade, Brian, staff, and students have strengthened and diversified recovery efforts for Central California Coast coho salmon. They have provided critical support for NOAA Fisheries and other resource partners by:

Brian has been a leading voice in discussions regarding the possible construction of a new conservation hatchery for Central California Coast coho salmon. The watersheds in the Santa Cruz Mountains are primarily owned by private individuals. Brian has been a vital connection to this important constituency.

Scott Creek is the front line for preserving Central California Coast coho salmon south of San Francisco Bay. The successful recovery of these populations will require forging and maintaining partnerships that use sustainable management approaches in these working landscapes.Brian and his staff at Swanton Pacific Ranch practice and teach these same values. 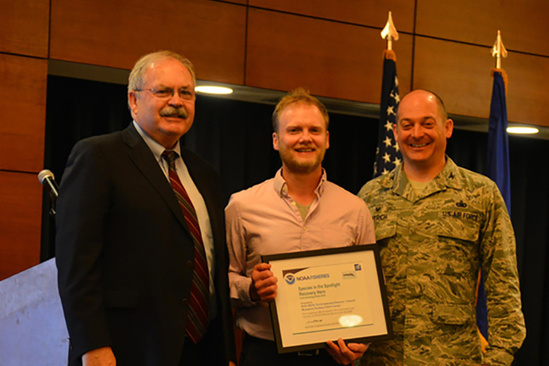 The program proactively conducts beluga research and conservation activities (many of which address priority actions identified in the 5-year action plan). The program partners, collaborates, and assists with other programs towards the goal of recovering the endangered Cook Inlet Beluga whale.

They have provided innovative monitoring techniques, long-term monitoring efforts, and data on belugas’ responses to noise. This has provided NOAA Fisheries managers invaluable information on the human influences on the population as well as important population characteristics. The program also took proactive steps in 2016 to help ensure healthy and plentiful prey for the whales by eradicating predatory northern pike in salmon-bearing waterways on joint base lands.

The program and its team have contributed resources and staff for numerous other beluga projects, including: 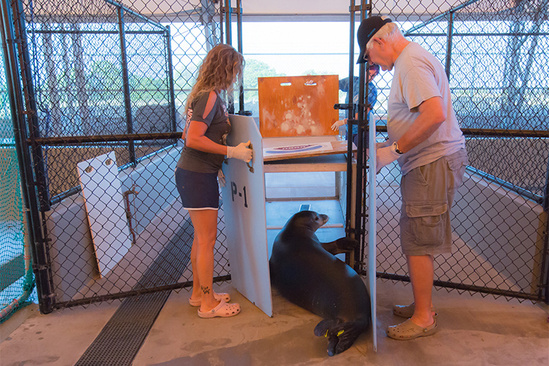 Since opening in 2014, The Marine Mammal Center’s Ke Kai Ola facility has played a critical role in Hawaiian monk seal recovery. The hospital is unique in that it is entirely dedicated to rehabilitating Hawaii’s endemic and endangered seal. The Marine Mammal Center has been a valuable partner for many years, with decades of experience rehabilitating pinnipeds in California. With the opening of the Hawaii Island facility, rehabilitation has become an option for more seals. The facility opened a new chapter in Hawaiian monk seal conservation and recovery.

By the end of 2016, a total of 15 malnourished seals had been successfully rehabilitated and returned to their homes, and four more remained in treatment awaiting their release to the Northwestern Hawaiian Islands. (Get the latest updates on Ke Kai Ola’s patients.) Monk seal rehabilitation presents its own unique set of challenges, which Ke Kai Ola’s staff has faced with tireless dedication.

There are only ~1,400 Hawaiian monk seals. These rehabilitated seals play an invaluable role in maintaining and building population numbers in the Northwestern Hawaiian Islands. Without Ke Kai Ola, many of these seals had virtually no chance of survival. In only a few short years, Ke Kai Ola has rehabilitated about 1 percent of the total population.

In addition to the role Ke Kai Ola has played in rehabilitation, the facility has also contributed resources and staff for numerous other Hawaiian monk seal projects, including:

The Ke Kai Ola staff is dedicated to monk seal conservation. They are incredibly knowledgeable, and exemplify the collaborative spirit that the Species in the Spotlight initiative seeks to foster and highlight. 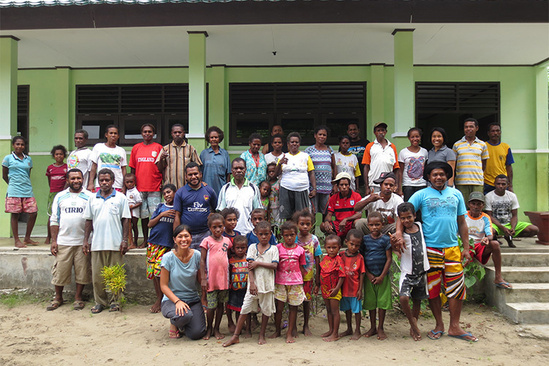 UNIPA researchers, students, and international collaborators have worked tirelessly. They established a science-based management plan that minimizes sea turtle nest failure and enhances hatchling production. UNIPA has also worked with communities and local partners, including the Tambrauw government, to gain support and trust. UNIPA engages them as stakeholders in implementing priority conservation actions, ensuring that they benefit from leatherback conservation.

The challenges on the ground are many, but the UNIPA leatherback project continues to persist with unwavering determination. Fitry Pakiding, who has been the heart and soul of the project in recent years, received the award on behalf of UNIPA. Fitry has a strong sense of responsibility towards the conservation of this leatherback population. Despite all the challenges, her dynamic involvement, common-sense approach, and wisdom have energized leatherback conservation efforts in Papua. 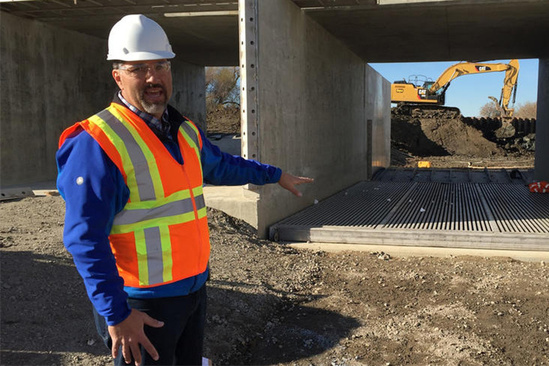 Lewis Bair, General Manager of Reclamation District 108, has been a leader in northern California water and salmon issues for many years. As part of the Sacramento Valley Salmon Recovery Program, Lewis has helped implement numerous actions to benefit Sacramento River winter-run Chinook salmon.

Most notably, Lewis’s efforts led to the funding of two major projects. Both projects were included in the 5-year action plan: a fish barrier at the Knights Landing Outfall Gates and the Wallace Weir Fish Rescue Project.

Reclamation District 108 contributed approximately $500,000 to the permitting and design of the fish barrier at Knights Landing Outfall Gates. This should reduce the straying of adult salmon on their upstream migration to spawning grounds.

The Wallace Weir Fish Rescue Project is expected to prevent adult salmon from straying into agricultural ditches and will help rescue salmon from the Yolo Bypass. This will allow them to be returned to the Sacramento River.

The Sacramento Valley Salmon Recovery Program was instrumental in restoring winter-run Chinook salmon spawning habitat. They supported the Painter’s Riffle Anadromous Fish Habitat Enhancement Project, which was completed in December 2014. This project was made possible through significant coordination among water users, the salmon fishing industry, environmental groups, and federal and state agencies. It  kicked off an accelerated pace of salmon habitat restoration. 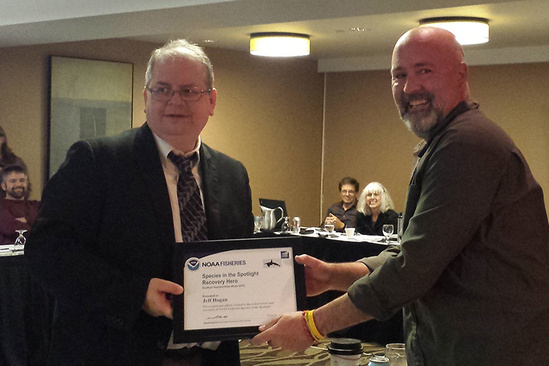 Jeff Hogan has partnered with NOAA for more than a decade and has helped implement many important recovery actions for endangered Southern Resident killer whales. Jeff is the Executive Director of Killer Whale Tales, an environmental education program. It uses storytelling and field-based science to inspire students to take an active role in the conservation of Pacific Northwest killer whales.

Jeff has poured his heart and soul into this unique program. He has helped promote awareness and conservation of killer whales to an audience that we would normally be unable to reach. During the 2015–2016 school year, Jeff and Killer Whale Tales reached a record of 12,742 students in 312 classrooms at 206 schools. This included new students and classrooms in California through a NOAA Hollings Grant and new partnerships with NOAA’s National Marine Sanctuaries Program. Killer Whale Tales inspires active stewardship in students and their families. It allows them to participate in actions that make measurable differences for the whales and their environment. No other program takes such an ambitious approach to address multiple aspects of killer whale conservation. Nor does any other program have such a strong record of evaluating the on-the-ground impact of recovery actions taken by dedicated individuals.

Partnering with Killer Whale Tales has helped us reach a new audience and successfully implement a variety of important actions in the recovery and Species in the Spotlight 5-year action plans. 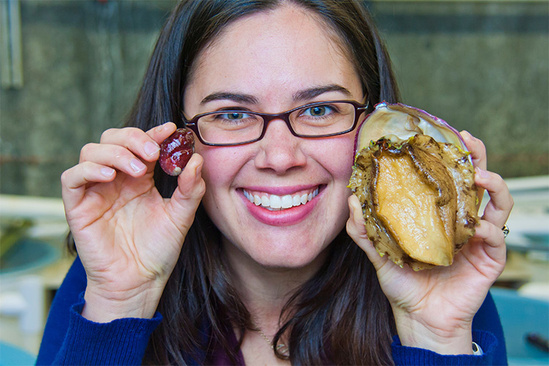 Kristin has played an instrumental role in shaping the captive breeding program for white abalone. Kristin manages the program—charged with rebuilding the declining populations of wild abalone—at the University of California, Davis Bodega Marine Laboratory.

Under Kristin’s leadership, in 2012 the program had its first successful spawn since 2003, and has since documented successful spawns each year. She helped facilitate the construction of a new broodstock facility. The improved flow, temperature, and lighting controls better mimic the abalone’s natural environment in southern California.

Kristin also aided the design and construction of new rearing tanks that should increase the survival of young abalone through their first year. Since she joined the program in 2011, Kristin has worked hard to facilitate collaboration within the Bodega Marine Laboratory. She has also partnered with various state and federal agencies, aquariums, and commercial aquaculture facilities to realize the recovery goals for white abalone.