You might think of corals and picture a sunny and shallow tropical reef. Yet recent advances in deep ocean exploration have revealed spectacular coral gardens in the dark ocean depths. Hundreds—and even thousands—of feet beyond the reach of sunlight, these unique corals and sponges are found off all our coasts. Ongoing exploration reveals new and familiar species thriving where we once expected little activity. These special creatures have already yielded new science, including medicines. They thrive in the largest yet least known environment on Earth: the deep sea. 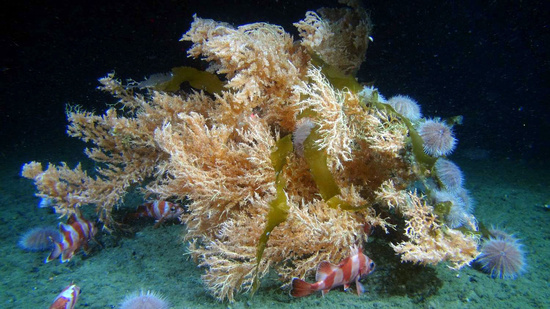 What Is Deep-Sea Coral Habitat?

While the conditions are extreme, the deep sea is home to an abundant variety of life. Deep-sea corals, like their warm-water cousins, are actually colonies of small animals that build a common skeleton, which grows into many shapes and colors. Unlike tropical reefs, they live from 150 feet to more than 10,000 feet below sea level, where sunlight is dim to nonexistent. Instead of forming rock-like reefs, these cold-water corals form groves of tree, feather, column, or fan shapes, sometimes reaching dozens of feet tall. Many fish, shrimp, crab, and other creatures use deep-sea corals and sponges as their habitat.

Deep-sea corals and sponges feed on microscopic organisms that flow in ocean currents. Unlike warm-water corals, they don't require sunlight as a source of nutrition. Their beautiful forms and structures, unique adaptations, cold and dark environment, and supporting role for the larger deep-sea ecosystem define a distinctive habitat we've only just begun to explore.

The full geographic extent of deep-sea corals is far from known because we have mapped less than 0.05 percent of the seafloor. Scientists have discovered deep-sea corals and sponges on continental shelves, slopes, canyons, and seamounts throughout U.S. marine waters. New locations and never-before-seen animals are continuously being discovered as we continue to explore the deep ocean.

Deep-sea corals grow very slowly, with some specimens found to be thousands of years old. Trawling, or dragging the seafloor with heavy fishing gear, can reduce these delicate coral gardens to rubble. At this slow growth rate, often only a few millimeters per year, damaged deep-sea coral groves won't regenerate for hundreds of years, if ever.

Laying undersea cables can destroy ancient coral mounds, as can oil and gas exploration. The effects of rising sea temperatures, ocean acidification, salinity changes, mineral extraction, and oil spills on deep-water coral habitats has not been studied in depth. However, deep-sea corals, like all creatures who build calcium carbonate skeletons, are likely to be adversely affected by rising ocean temperatures and ocean acidification. Threats to deep-sea corals directly impact the animals living among them.

Deep-sea coral and sponge habitats represent some of the least explored places on Earth, and each new discovery reveals valuable information. For example, previously unknown deep-water coral gardens off the Gulf of Maine were found teeming with commercially valuable redfish. And the largest sponge ever found was observed on a NOAA deep-sea coral exploration cruise in the Papahānaumokuākea Marine National Monument. Known deep coral environments are being mapped as you read this information, illuminating even more abundant diversity under the sea.

You will find deep-sea coral groves in all the world's oceans. Fishermen first discovered examples of deep-sea corals about 250 years ago. Before we had submersible vehicles, little was known about this habitat, but in recent decades, we've learned how these fragile environments support our fisheries.

In recent years, deep-sea coral habitats have been discovered off the Atlantic coast, hidden in deep canyons. These slow-growing communities take thousands of years to develop. Our productive Atlantic fisheries, active for more than 400 years, have likely destroyed many corals on the continental shelf with bottom-trawling. A first of its kind, the Frank R. Lautenberg Deep-Sea Coral Protection Area covers a large area far offshore from Virginia to Connecticut. Fishing here may not use gear that touches the seafloor.

One important way we protect habitats such as deep-sea corals is through the Marine National Monuments and National Marine Sanctuaries programs. Our Pacific Islands Fisheries Science Center studies the monuments and sanctuaries from Hawaii westward. For instance, Papahānaumokuākea Marine National Monument is a string of atolls and islands, including Midway Island, lying north and west of the familiar Hawaiian Islands. On every mission, intense exploration of these productive regions has revealed spectacular deep-sea corals and other animals.

We Partner With State and Local Agencies

NOAA funds and coordinates deep-sea coral research across the nation and even around the world. These deep discoveries provide solid, scientific information to managers who want to be good stewards of the unfamiliar sea. The Deep Sea Coral Research and Technology Program builds a bridge between research results and applied conservation programs. Since 2009, the program has funded several partners and multiyear research cruises that explore some of the most remote, least known places on Earth. Using this information, we work closely with regional fishery management councils to conserve important habitat. We also share this science with the public through our world-class data portal.

We all have an interest in protecting deep-sea coral gardens from further harm. Among the surprising coral garden discoveries are organisms that produce compounds useful in fighting antibiotic-resistant infections. This productive habitat also provides spawning grounds for commercially desirable fish such as grouper, snapper, sea bass, and rockfish, as well as shrimp, lobsters, and crabs. Deep-water coral clusters provide shelter for an unknown number of species that are new to science, many of whom could be useful in ways we don't yet understand.

Last updated by Office of Habitat Conservation on 06/14/2022 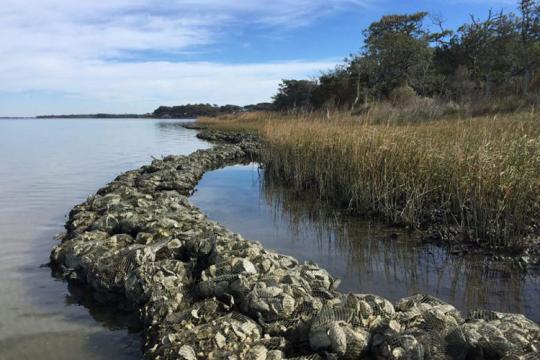