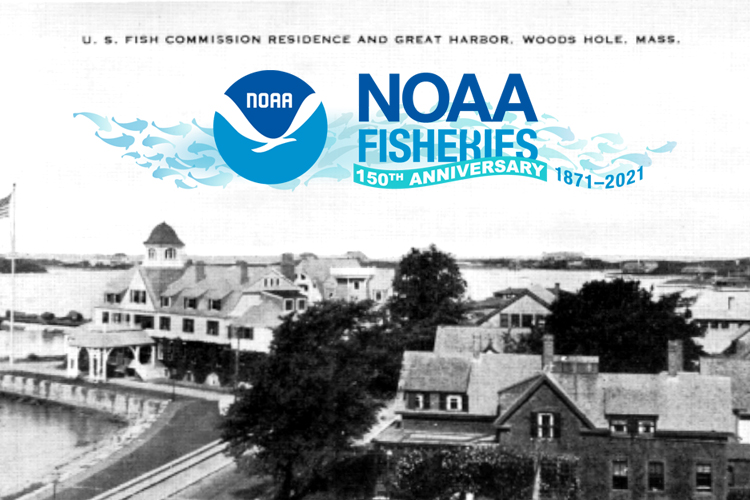 This year the Northeast Fisheries Science Center celebrates our role in 150 years of science, service, and stewardship of our nation’s marine life and their habitats. Throughout 2021 we’re highlighting our history and legacy, current work, and the opportunities that lie ahead.

Each of our laboratories has a story to tell. We’ll be featuring each of them, our science superheroes, evolving technologies, and foundational building blocks that have made our Science Center and its science a success. We’ll take an all-important look ahead to the next decade of discovery and stewardship at our science centers.

There've been more than a few superheroes at our science center. Each had their own special powers that helped them navigate tough and sometimes seemingly insurmountable challenges. For our 150th anniversary, we’re taking a look back and highlighting a few of the pioneers and visionaries who’ve contributed to our science center and its excellence.

Technology helps us provide the best available data to manage our marine resources. Because it changes, we’ve always had a finger on the pulse of evolving technologies. Sometimes the technology exists and we can simply adopt or adapt it for our needs. Other times, we’ve had to invent it. Here are just a few examples of evolving technologies we’ve used over the last 150 years to better understand our marine environments.

Learn more about how we shaped (and reshaped) technologies to fit our needs.

Building Blocks - The Foundations of Our Science

Learn more about our solid foundation

People, Places and Things reveal the personality of our facilities and offer a glimpse into the perhaps lesser known aspects of our history. Unsung heroes, key places and special events or usual happenings have helped shape the legacy of the Northeast Fisheries Science Center.

Every superhero has an origin story. NOAA Fisheries is no exception.

Superman is from Krypton; Batman, from Gotham; Thor, from Asgard. NOAA Fisheries was born in Woods Hole, Massachusetts, where our very first laboratory was sited.

A President and a Famous Scientist Walk into a Village

On February 9, 1871, President Ulysses S. Grant signed a law that created the U.S. Commission of Fish and Fisheries, known as the Fish Commission. It was the nation’s first federal conservation and environmental research agency. At the time, Massachusetts, Rhode Island, and Connecticut were trying to address a serious decline in marine fish catches. However, there was not a consistent approach or common understanding of the decline.

One way to work a problem among states is to provide some federal support to find a solution—that’s when Congress got involved and authorized the Fish Commission. It was charged with conducting an official inquiry into the apparent decline in fishery catches off Southern New England. For the most part this centered on commercial harvest operations using fish pounds and weirs, and subsistence fishermen and anglers using handlines. If there was indeed a decline, the commission was to study its causes and recommend ways to reverse it.

President Grant appointed prominent scientist Spencer Fullerton Baird to lead the commission. Baird, an eminent zoologist and the first assistant secretary of the Smithsonian Institution, was an obvious choice. In fact, Baird laid much of the groundwork for this inquiry himself, using his many contacts in Congress. He more or less volunteered to take on the task.

He hit the ground running in his second, and unpaid, government job as Fish Commissioner. Within a few months, he established the first U.S. marine research station—just a shed in the early years—at Woods Hole. The agency now known as NOAA Fisheries grew from this little shed in Woods Hole.

Baird was handed a tall order, as marine fisheries science was in its infancy. Also, there was as yet little in the way of systematic data collection about marine fisheries and fish. He needed to gather information not only on fish numbers, but also on the general natural history of the waters supporting these fish, and on the businesses that depended on them.

Working with a few other hardy souls, mostly academic colleagues with an interest in marine life, Baird devised a wide-ranging research plan. It would be familiar to any fishery scientist today:

After two exhaustive field seasons, Baird credibly discounted most of the possible causes. He and his team settled on two: predation by bluefish on the fish in question, and intensive fishing for too long and at the time of year when fish were spawning. Since there was little to be done about bluefish that didn’t involve killing off one food fish to save others, the commission proposed a simple remedy. They settled on “occasional intermission during the six weeks when most of these fish deposit their eggs, of sufficient length of time to allow a certain percentage to pass through to their breeding ground.”

Baird then started on what would be his final scientific quest: establishing permanent federal capability to understand the nation’s marine resources. Upon his death in 1887, Congress reorganized the commission into a permanent government agency. It had a paid, full-time commissioner and a renewed focus on a broad array of basic and applied research in marine and environmental sciences.