A celebration took place in 2012 to honor the research vessel's many contributions to the nation's fisheries and to improved conservation and management of our living marine resources and their environments. 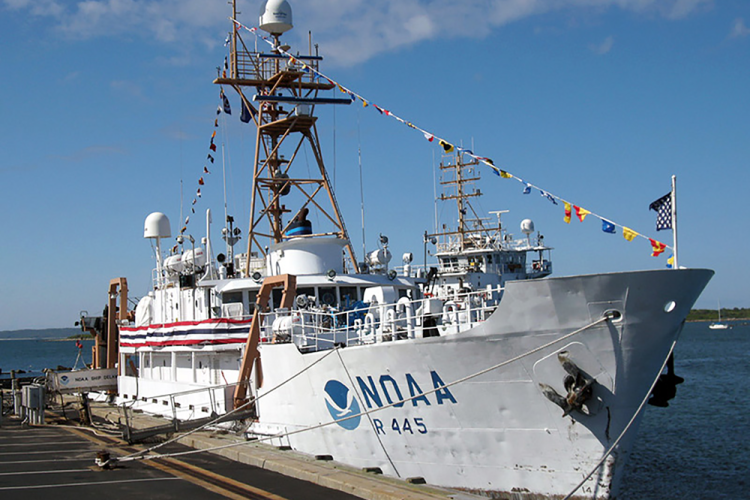 The NOAA Ship Delaware II celebrated 44 years of service to fisheries and oceanographic research at the Woods Hole Laboratory of the Northeast Fisheries Science Center in Woods Hole, the vessel's home port. A celebration took place June 15, 2012 to honor the research vessel's many contributions to the nation's fisheries and to improved conservation and management of our living marine resources and their environments.

The 155 ft Delaware II was built for exploratory fishing and gear research. It was designed by George G. Sharp, Inc. of New York and built by the South Portland Engineering Company of South Portland, Maine. The stern ramp trawler was to perform a variety of fishing and research tasks and also had a mechanized trawl handling system. A full-length trawl net ramp allowed gear to be hauled far forward, almost to the bow, through a tunnel in the main deckhouse. This permitted the crew to pull the entire trawl aboard in one haul. Its design also provided for side trawling, clam and scallop dredging, longlining, gill netting and purse seining, along with handling experimental fishing gear and systems.

At the time of its construction in the late 1960s, the ship's design was considered a step forward in the development of stern trawling. The initial contract was awarded in May 1964, and delivery of the completed vessel expected in January 1, 1966, but a May 1965 shipyard fire destroyed all construction to that date, delaying the final delivery of the completed vessel to 1968. As missions and technology expanded, the ship underwent a major renovation in 1995-1996 which resulted in a significant change in its appearance.

Not long after it was commissioned in 1968, the Delaware II departed on its first research cruise in the Northwest Atlantic. The vessel replaced its predecessor, the modified 147-foot commercial fishing trawler Delaware, at the fisheries service's Exploratory Fishing and Gear Research Base in Gloucester, Mass.

Delaware II spent much of its early career conducting trawl gear and fish handling systems development from Gloucester, Mass. In October 1971 the ship moved to the NEFSC's Sandy Hook, N.J. laboratory, and when the inshore and offshore ecosystem survey groups were merged in the 1970s, the vessel moved to the Woods Hole Laboratory, where it has been home ported since 1980.

Among the Delaware II's more unusual missions were studies of the December 1976 Argo Merchant oil spill off the coast of Nantucket and the impacts of the April 2010 Gulf of Mexico oil spill.

In August 1976 while undergoing routine repairs and maintenance at a Rhode Island shipyard, the Delaware II rolled on its port side during launching and came to rest at a nearly 45 degree angle. The ship was later hauled and refloated, and delivered after work was completed in November 1976.

The Delaware II has conducted a variety of research cruises, including marine mammal surveys and studies of plankton and larval fish abundance for the long-term Ecosystems Monitoring program. Researchers aboard the Delaware II also recover, redeploy, and service ocean data buoys in the Gulf of Maine and off the Northeast coast in order to collect ocean and weather data relied on by mariners, fishers, weather forecasters, the US Coast Guard, researchers, and many others. The bulk of the Delaware II's work, however, has helped provide the foundation for managing fishery resources and for ecological research, contributing significantly to our knowledge of marine mammal populations and to the NEFSC's unique data library, including the world's longest time series of standardized fishery population data.

In recent years the Delaware II has spent much of its time at sea conducting ecosystem monitoring survey cruises and collaborative studies with NASA and Old Dominion University to ground truth satellite measurements and study climate variability. Other missions focused on North Atlantic Right whale surveys, benthic habitat studies, surfclam and ocean quahog surveys, and Atlantic herring hydroacoustic surveys during which new technology has been tested.