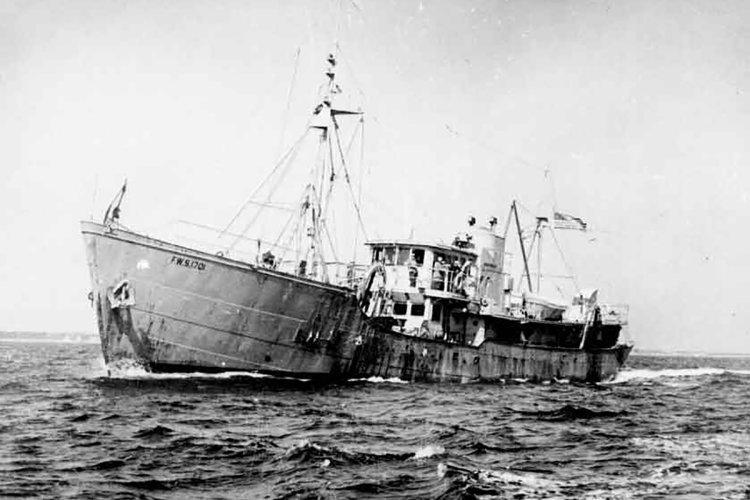 Originally named the Harvard, she was built in 1926 as a steam trawler and fished New England waters until 1939 when she was sold by the General Seafoods Corporation to the Government for $1.00 to be converted into a fisheries research vessel. In 1942, her conversion was well under way when she was taken over by the Coast Guard to be used for patrol duty; the Second World War was in full swing and vessels were badly needed. The Navy effected an extreme conversion by lengthening the vessel from 140 feet to 179 feet overall, removing trawling gear and adding armament and other military equipment. She was then renamed the Bellefonte.

Toward the end of the War (in 1944) the vessel was returned to the U.S. Fish and Wildlife Service and once more was scheduled for conversion to a research vessel. This was finally accomplished in 1948 and she was commissioned at the Boston Fish Pier on March 19 of that year.

As finally converted for research work, the Albatross III resembled a Boston trawler although much longer than most of the fleet. She had an overall length of 179 feet, beam of 24 feet, and draft of 12 feet. Her displacement was 525 tons and cruising range 4500 miles.

She was powered with a Fairbanks-Morse seven-cylinder, 805-horsepower diesel engine. Three diesel motor-generator sets generated 140 kilowatts of 110-volt DC power. The trawl winch was electric powered carrying 600 fathoms of 7/8-inch wire on each of its two drums, permitting trawling operations in 200 fathoms of water. The deck was fitted out in the fashion of the standard Boston trawler. 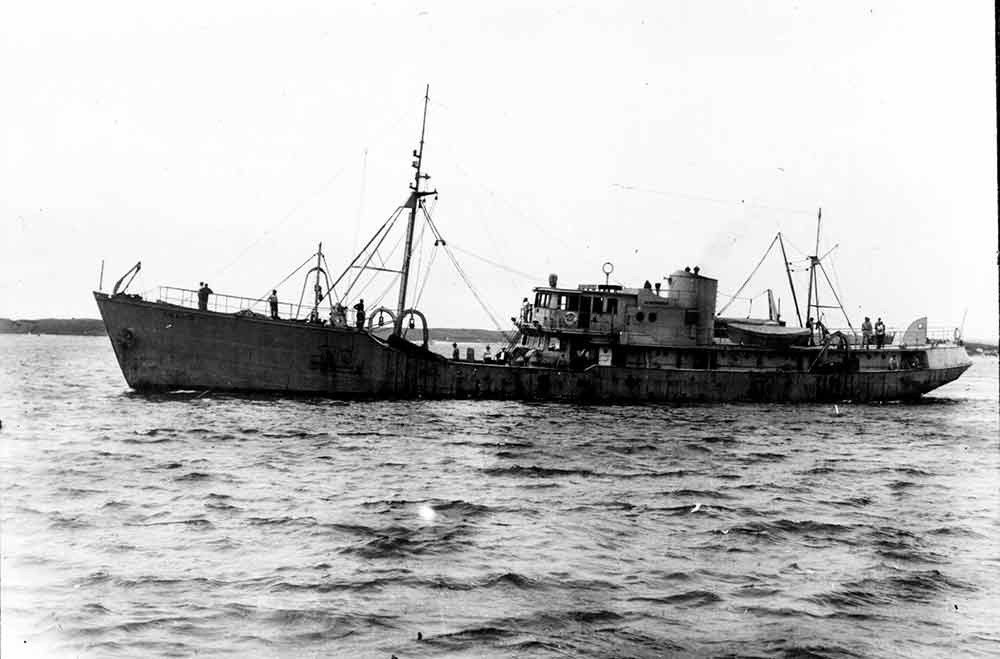 The Albatross III was originally provided with a fish hold to carry 50,000 pounds of fish on ice as in a commercial trawler. It was planned that fish caught in research operations would be landed and sold to the credit of the vessel, thus reducing the net cost of operation. After a few cruises this plan proved impractical and was abandoned. Two freezer units, however, proved more useful. One of these provided for quick freezing and maintained a temperature of 20F below zero; the other room held temperatures at about freezing. These were successfully used for the storage of scientific specimens, freezing replacing alcohol and formaldehyde as methods of preservation.

The laboratories were located on the main deck just aft of the trawl winch. The wet laboratory opened onto both the port and starboard decks through Dutch doors. It was fitted with a stainless steel sink in the center, suitable for handling and examining fish. Two small sinks located in the cabinets on the outside bulkheads were designed for chemical and hydrographic work. A dry laboratory or library, located aft of the wet laboratory, was provided with a large work table, chairs, bench, and shelves, and was used originally as an office for scientists for the preliminary study of data collected at sea. On later cruises it was crammed with electronic gear concerned with underwater television research.

Hydrographic booms and winches were located on the bridge deck on both the port and starboard sides. These booms featured travelers to which the lowering blocks were attached and which regulated the distance of the lowering wire from the rail.

Living quarters provided accommodations for the ship's crew and scientific personnel. The master's stateroom was located aft of the chart room on the bridge deck. The officers', mates', and engineer's rooms were located aft of the engine room on the main and lower decks. There were four scientists' staterooms located around a wardroom on the lower deck forward of the galley and crew's mess. A stateroom for the steward and cook was located just forward of the crew's mess while the crew's quarters were in the forecastle on the lower deck. There were accommodations for a total of 35 men. Originally there was a crew of 21 men and a complement of 6 scientists, leaving 8 extra bunks available for additional scientific personnel or crew members as needed. The crew was later reduced to 18.

The Albatross III remained in the possession of the government for 11 years, during which time she added materially to our knowledge of the fisheries and oceanography of the Northwest Atlantic. However, her usefulness to fishery research was impaired by a chronic shortage of operational funds.

She made her first scientific cruise on May 17, 1948. For the rest of that year and until September 1949, she worked fairly consistently surveying the New England Banks, conducting experiments on the selectivity of various sizes of mesh in otter trawls, and in hydrographic-plankton work. In 1950 she was able to operate only until September. Her financial difficulties were resolved in February 1951, when she was loaned to the Woods Hole Oceanographic Institution for work under an Office of Naval Research contract. In 1952 she was operated by the U.S. Fish and Wildlife Service under a similar contract. She returned to fishery research for the period March to September 1953, after which she was tied up at the Woods Hole dock until January.

At this time new funds were obtained and the Albatross III was placed in continuous operation until March 1959. By this time increased maintenance costs of the ageing ship, and increased operational costs forced the Bureau to bring to a close the work of the third of the Albatross series. She was put up for sale under closed bids and sold to the Island Steamship Line (Joseph T. Gelinas, President) of Hyannis, Massachusetts, in November 1959.

During her active life as a fishery/oceanographic research vessel, the Albatross III conducted 128 cruises in the waters off New England and in adjacent areas. She contributed greatly to the study of the wise utilization of the groundfish resources of the Northwest Atlantic. Much of her work related to the program of the International Commission for the Northwest Atlantic Fisheries which was concerned with the regulation of the fisheries in this area. These great fisheries are now under regulations imposed through the action of the New England and Mid-Atlantic Fishery Management Councils, public bodies created by the Magnuson Fishery Conservation and Management Act of 1976 (200-mile-limit law).

The work of the Albatross III has laid the foundation for a broader and more intensive program of investigation of the fisheries of the area, developing the knowledge required for an intelligent approach to the management of the fisheries, and toward a better understanding of the relation of environmental conditions to the productivity of the area in terms of fishery resources.