The latest information on the Northeast Canyons and Seamounts National Monument

Where is the Monument?

Get more information about the Monument's location and resources, as well as coordinates.

What Monument resources are protected under the proclamation?

The entire ecosystem is a monument resource. The proclamation states: “The canyon and seamount area includes the waters and submerged lands within the coordinates included in the accompanying map. The canyon and seamount area contains objects of historic and scientific interest that are situated upon lands owned or controlled by the Federal government. These objects are the canyons and seamounts themselves, and the natural resources and ecosystems in and around them.”

What are the rules, regulations, and permit requirements for activities in the Monument?

The following activities are prohibited in the monument:

The following activities are exempted from the monument's permitting program:

The following activities are regulated through the monument's permitting process:

Find out more about permits in the Monument.

What does the Monument mean for fishermen?

Commercial fishing and other resource extraction activities are prohibited within the monument boundaries. The red crab and the American lobster pot and trap fisheries will continue under existing permits until September 15, 2023.

Do red crab and lobster fishermen need any special permits to fish in the Monument until 2023?

How does the monument overlap with the Georges Bank Deep-Sea Coral Protection Area?

Since the Monument was first designated in 2016, the New England Fishery Management Council developed and NOAA Fisheries approved and implemented (86 FR 33553, June 25, 2021) an Omnibus Deep-Sea Coral Amendment to its fishery management plans. This action prohibited the use of bottom-tending commercial fishing gear (with an exception for red crab pots) within the designated Georges Bank Deep-Sea Coral Protection Area, an area along the outer continental shelf in waters no shallower than 600 m to the Exclusive Economic Zone boundary. This action closed approximately 82 percent of the Monument to fishing earlier this year. This reinstated Monument fishing prohibition applies to the remainder of the Monument area, shown in the figure below. Lobster fishing with fixed gear may continue in the area of the reinstated Monument fishing restrictions (red hashed area in the figure below) until September 15, 2023. Fishing for deep-sea red crab with fixed gear may continue throughout the entire Monument until September 15, 2023. 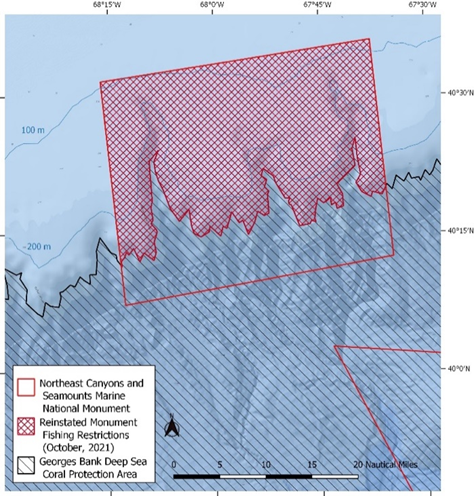 If I am fishing for lobster in the Monument, may I keep my Jonah crab bycatch?

Yes. Under current practice in the region, lobster fishermen in this fishery may retain Jonah crab as bycatch. In the future, we will be implementing fishery regulations for the Monument once this issue is more fully evaluated and addressed. In the interim, NOAA and FWS, as co-managers of the Monument, will permit the lobster fishermen’s current practice of retaining Jonah crab bycatch to continue in order to avoid unnecessary disruption.

What happens if a lobster or red crab permit holder sells a vessel or transfers his or her permit through the vessel replacement process?

The proclamation allows lobster and red crab fishing for up to 7 years “in accordance with applicable fishery management plans and other regulations, and under permits in effect on the date of this proclamation.” The current management measures allow permits to be conveyed when a vessel is sold or replaced. Therefore, fishing under a transferred permit would be allowed until the 7 years is over, then all commercial fishing must stop.

Are there transit provisions for commercial fishing vessels to transit through the area?

Yes. Commercial fishermen may transit through the area if fishing gear is stowed and not available for immediate use during passage without interruption through the Monument.

Is recreational fishing still allowed in the Monument?

Will recreational fishermen be allowed to anchor while in this area?

No, regular anchors are prohibited. The Proclamation states that “drilling into, anchoring, dredging, or otherwise altering the submerged lands” is a prohibited activity. However, at this time, the use of sea anchors (typically an object dragged behind the vessel in the water column to stabilize a vessel’s drift) are allowed as they do not anchor the vessel nor do they alter submerged lands. Any change to the scope and extent of permitted recreational fishing activities will be determined in implementing regulations.

Will recreational fishermen still be allowed to drag anchors through this area?

No. Dragging of anchors is prohibited.

Can research occur in the Monument?

Yes. The proclamation states that the Secretaries may permit “Research and scientific exploration designed to further understanding of monument resources and qualities or knowledge of the North Atlantic Ocean ecosystem and resources.” The National Wildlife Refuge System has three types of special use permits to regulate research and other activities in the Monument.

Does the NOAA Fisheries bottom trawl survey operate in the Monument area? And will it continue?

Survey stations are randomly generated within standardized areas defined by depth and latitude throughout U.S. waters off the Northeast. The surveys do not take place on the Seamounts. In the Canyons, we have averaged about three stations per survey in the area over the last 10 years. Since 2005, we have excluded portions of Lydonia and Oceanographer Canyons when survey stations are generated. Those excluded areas were designated as habitat closed areas by the regional fishery management councils to protect essential fish habitat and structured sea life such as corals. Going forward, NOAA will need to make a finding as to whether the survey is consistent with the care and management of the monument resources.

How does the survey affect Monument resources?

The survey captures marine species defined as Monument resources. The volume of catches in this region is generally fairly low. In the last 10 surveys the species most frequently caught in the Monument were longfin squid, red hake, fourspot flounder, and gulf stream flounder. The survey gear operates on and near the ocean floor and during a tow it can disturb the bottom or sea life that lives there.

What is the difference between a National Marine Sanctuary and a Marine National Monument?

What is the difference between a Marine Protected Area and a Monument?

A Marine National Monument is a type of Marine Protected Area designated by Presidential Proclamation. Marine protected areas (MPAs) in the U.S. come in a variety of forms and are established and managed by all levels of government.

Where can I find out more about the Monument?

The U.S. Fish and Wildlife Service's website has more information. You can also read the Proclamation, Press Release, and Fact Sheet produced by the White House.