Deep in the oceans exist some of the world's oldest and most mysterious sea canyons and mountains, or seamounts.

On November 9, 2022, NOAA Fisheries published a Notice seeking comments  ahead of drafting the Northeast Canyons and Seamounts Marine National Monument Omnibus Amendment to the Greater Atlantic Region’s fishery management plans. We are developing this action under our Secretarial authority at section 305(d) of the Magnuson-Stevens Fishery Conservation and Management Act, in consultation with the Mid-Atlantic and New England Fishery Management Councils.

This amendment would incorporate the Northeast Canyons and Seamounts Marine National Monument’s area and commercial fishing prohibition into FMPs and, ultimately, into fishery regulations. NOAA Fisheries is asking for feedback on this action through November 30, 2022.

The Northeast Canyons and Seamounts National Monument consists of approximately 4,913 square miles (12,724 square kilometers) and is located about 130 miles east-southeast of Cape Cod. Approximately the size of Connecticut, the monument includes two distinct areas, one that covers three canyons and one that covers four seamounts. 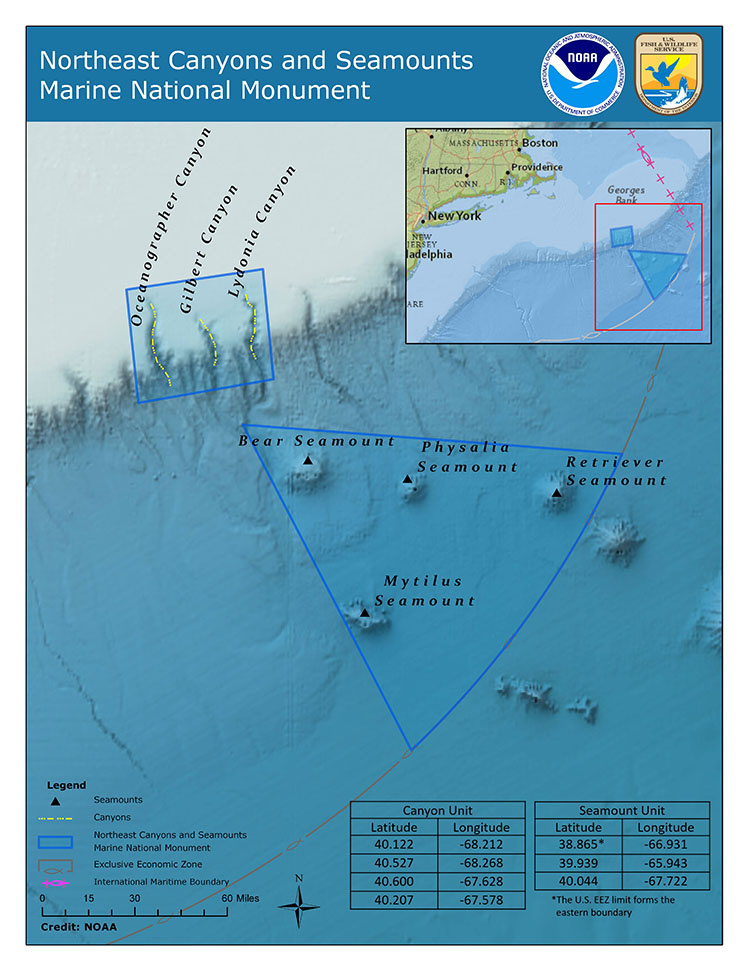 On September 15, President Obama designated the first marine national monument in the Atlantic Ocean, the Northeast Canyons and Seamounts Marine National Monument, using his authority under the Antiquities Act of 1906. The area has been the subject of scientific exploration and discovery since the 1970s. This is the first and only national marine monument in the Atlantic Ocean.

After commercial fishing was removed from the list of prohibited activities within the monument by President Trump in 2020, President Biden again revised the prohibited activities for the monument to reinstate the prohibition on commercial fishing on October 8, 2021. All commercial fishing, other than for American lobster and Atlantic deep-sea red crab taken with fixed gear, is prohibited within the Monument as of October 8, 2021. American lobster and red crab fisheries are exempted from this prohibition until September 15, 2023, except where restricted under the New England Fishery Management Council’s Deep-Sea Coral Amendment (see the FAQs).

The Department of Commerce and the Department of the Interior share management responsibility for the monument. The National Oceanic and Atmospheric Administration is responsible for managing activities and species within the monument under the Magnuson-Stevens Fishery Conservation and Management Act, the Endangered Species Act, the Marine Mammal Protection Act, and any other applicable Department of Commerce legal authorities. The U.S. Fish and Wildlife Service is responsible for managing activities and species under the National Wildlife Refuge System Administration Act as amended, the Refuge Recreation Act, the Endangered Species Act, Public Law 98-532, and Executive Order 6166 of June 10, 1933. The two agencies are working cooperatively on management.

The proclamation gives us three years to prepare a joint management plan. Some implementing regulations related to prohibited and restricted activities may be issued prior to the completion of the management plan.

These canyons and seamounts are home to at least 54 species of deep-sea corals, which live at depths of at least 3,900 meters below the sea surface. The corals, together with other structure-forming fauna such as sponges and anemones, create a foundation for vibrant deep-sea ecosystems, providing food, spawning habitat, and shelter for an array of fish and invertebrate species. 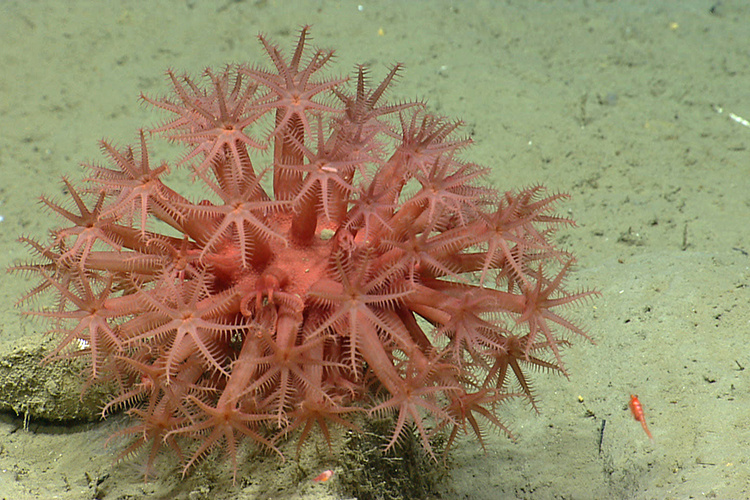 Because of the steep slopes of the canyons and seamounts, oceanographic currents that encounter them create localized eddies and result in upwelling. Currents lift nutrients, like nitrates and phosphates, critical to the growth of phytoplankton from the deep to sunlit surface waters. These nutrients fuel an eruption of phytoplankton and zooplankton that form the base of the food chain. Aggregations of plankton draw large schools of small fish and then larger animals that prey on these fish, such as whales, sharks, tunas, and seabirds. Together the geology, currents, and productivity create diverse and vibrant ecosystems.

The Canyons Unit includes three underwater canyons -- Oceanographer, Gilbert, and Lydonia -- and covers approximately 941 square miles. The canyons start at the edge of the geological continental shelf and drop from 200 meters to thousands of meters deep.

In Oceanographer, Gilbert, and Lydonia canyons, the hard canyon walls provide habitats for sponges, corals, and other invertebrates that filter food from the water to flourish, and for larger species including squid, octopus, skates, flounders, and crabs. Major oceanographic features, such as currents, temperature gradients, eddies, and fronts, occur on a large scale and influence the distribution patterns of such highly migratory oceanic species as tuna, billfish, and sharks. They provide feeding grounds for these and many other marine species. 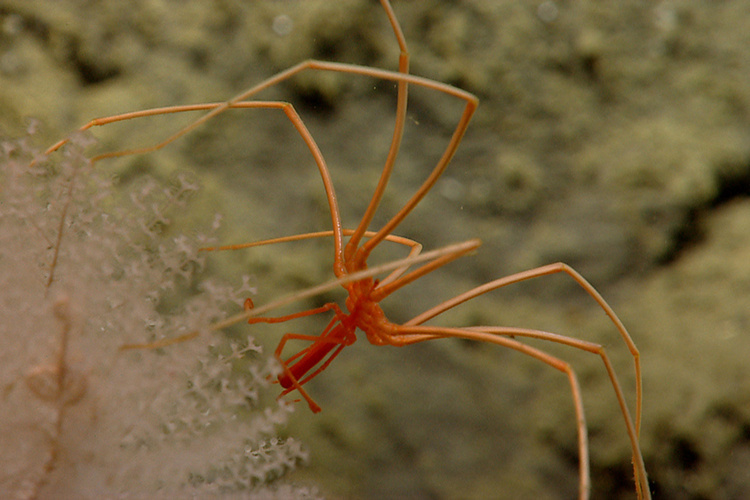 Toothed whales, such as the endangered sperm whale, and many species of beaked whales are strongly attracted to the environments created by submarine canyons. Surveys of the area show significantly higher numbers of beaked whales present in canyon regions than in non-canyon shelf-edge regions. Endangered sperm whales, iconic in the region due to the historic importance of the species to New England's whaling communities, preferentially inhabit the U.S. Atlantic continental margin. Two additional species of endangered whales (fin whales and sei whales) have also been observed in the canyon and seamount area.

The New England Seamount Chain was formed as the Earth's crust passed over a stationary hot spot that pushed magma up through the seafloor, and is now composed of more than 30 extinct undersea volcanoes, running like a curved spine from the southern side of Georges Bank to midway across the western Atlantic Ocean. Many of them have characteristic flat tops that were created by erosion by ocean waves and subsidence as the magma cooled. Four of these seamounts -- Bear, Physalia, Retriever, and Mytilus -- are in the United States Exclusive Economic Zone. Bear Seamount is approximately 100 million years old and the largest of the four; it rises approximately 2,500 meters from the seafloor to within 1,000 meters of the sea surface. Its summit is over 12 miles in diameter. The three smaller seamounts reach to within 2,000 meters of the surface. All four of these seamounts have steep and complex topography that interrupts existing currents, providing a constant supply of plankton and nutrients to the animals that inhabit their sides. They also cause upwelling of nutrient-rich waters toward the ocean surface. 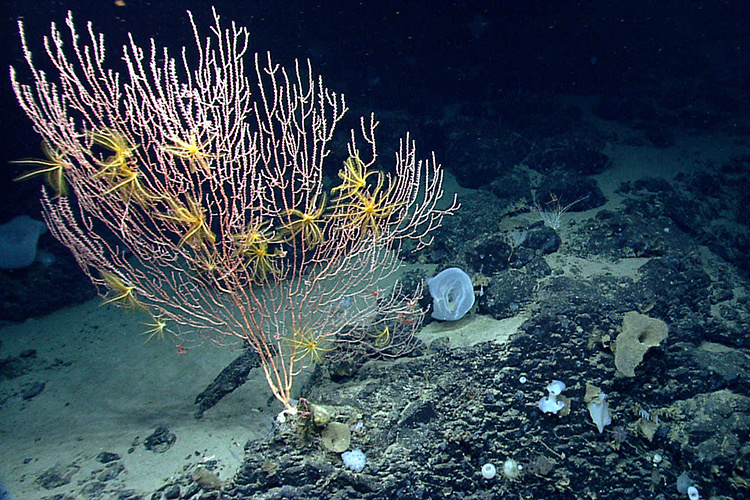 Geographically isolated from the continental platform, these seamounts support highly diverse ecological communities with deep-sea corals that are hundreds or thousands of years old and a wide array of other benthic marine organisms not found on the surrounding deep-sea floor. They provide shelter from predators, increased food, nurseries, and spawning areas. The New England seamounts have many rare and endemic species, several of which are new to science and are not known to live anywhere else on Earth.

The submarine canyons and seamounts create dynamic currents and eddies that enhance biological productivity and provide feeding grounds for seabirds; pelagic species, including whales, dolphins, and turtles; and highly migratory fish, such as tunas, billfish, and sharks. More than ten species of shark, including great white sharks, are known to utilize the feeding grounds of the canyon and seamount area. Additionally, surveys of leatherback and loggerhead turtles in the area have revealed increased numbers above and immediately adjacent to the canyons and Bear Seamount.

Marine birds concentrate in upwelling areas near the canyons and seamounts. Several species of gulls, shearwaters, storm petrels, gannets, skuas, and terns, among others, are regularly observed in the region, sometimes in large aggregations. Recent analysis of geolocation data found that Maine's vulnerable Atlantic puffin frequents the canyon and seamount area between September and March, indicating a previously unknown wintering habitat for those birds.

These canyons and seamounts, and the ecosystem they compose, have long been of intense scientific interest. Scientists from government and academic oceanographic institutions have studied the canyons and seamounts using research vessels, submarines, and remotely operated underwater vehicles for important deep-sea expeditions that have yielded new information about living marine resources. Much remains to be discovered about these unique, isolated environments and their geological, ecological, and biological resources.

Check out our Frequently Asked Questions about the Monument. 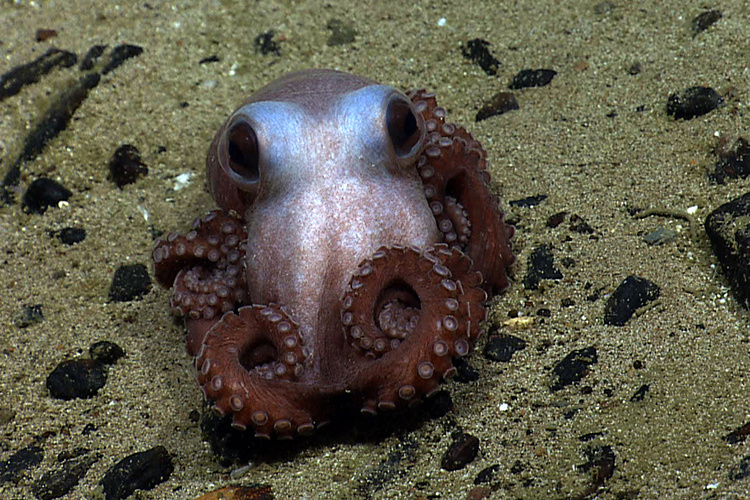