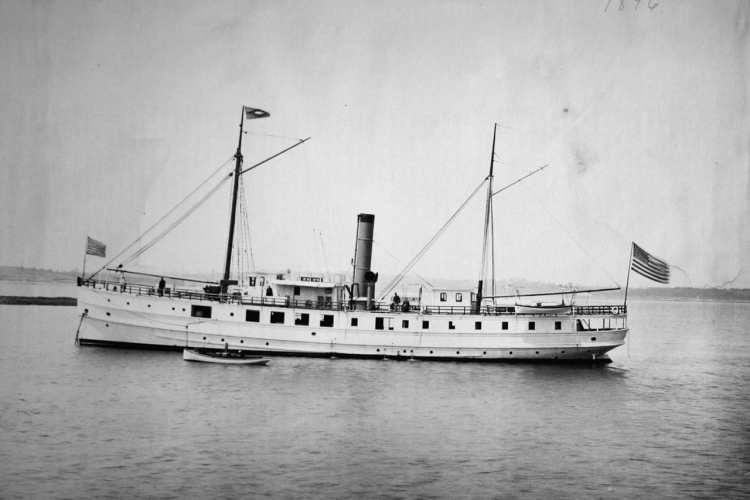 The U.S. Commission of Fish and Fisheries recognized the need for coastal vessels to conduct surveys, explorations and scientific research on marine resources from its beginning by a joint resolution of Congress on February 9, 1871. In 1879 Congress appropriated $45,000 for a vessel and the Commission decided on a coastal steamer designed by C. W. Copeland of the Light House Board. It was planned primarily as a floating hatchery and was to be named the Fish Hawk. Until 1880 the Navy Department had furnished steamers for the Commission's summer work every year except 1872 and 1876. The first detail was a small steam launch in 1871. In 1873, 1874, and 1875 the 100-ton steamer Blue Light and in 1877, 1878 and 1879 the 306-ton steamer Spedwell provided excellent facilities for coastal surveys. 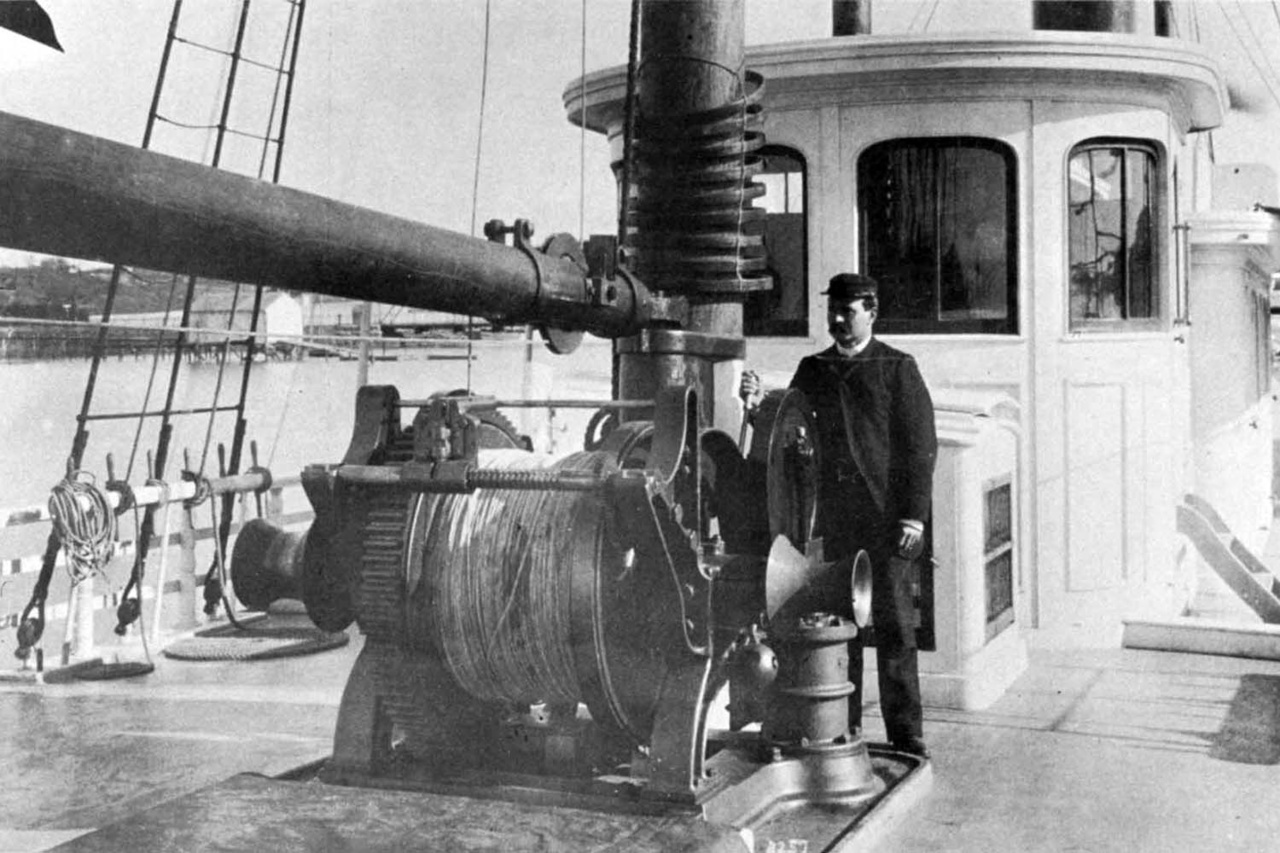 Pilot operating the winch of the research vessel Fish Hawk

The Fish Hawk, a coal burning twin-screw steamer, was 157 feet long with 484 tons displacement. The fore and aft two-masted schooner was commissioned in the spring of 1880 and the Navy Department provided officers and crew under the command of Lieut. Z. L. Tanner. She was outfitted as a hatchery for shad, striped bass. mackerel and herring and also for general scientific research with a hoisting winch with 1,000 fathoms of steel cable for trawling and dredging and a variety of other equipment for sounding, obtaining sea bottom temperatures and collecting marine organisms. The hull below the main deck was of iron sheathed with yellow pine, about 3-inches thick, caulked and coppered. Above the main deck the structure was wood. She had a promenade deck extending from stem to stern and from side to side on which was located Ihe pilot house, captain's quarters and laboratory. In 1870, most fishery scientists believed that spawning success was the most significant factor in the productivity of fisheries. American shad was one of the more important fisheries of the United States and their propagation had the highest priority. To successfully propagate shad, hatcheries would have to be built on every major river from Florida to Massachusetts. Because shad runs last only a month or less at any locality, the concept of a floating hatchery that could move along the coast was considered practical.

The main deck was filled with hatching equipment. This equipment consisted of a pump supplying 10,000 gallons per hour, two distribution tanks of 500 gallons each, 36 hatching cones, each capable of hatching 200,000 shad eggs, and 18 hatching cylinders, which were suspended nine on each side from beams outside the vessel. Fertilized eggs were placed in each cone and the current was regulated by feed valves to keep them gently in motion so they would not mat or settle to the bottom. The hatching cylinders with wire gauze bottoms were suspended, partially submerged, over the side and cam machinery gave them a gentle ascent and a more rapid descent of about 8 inches causing the eggs to rise from the bottom and circulate freely. Each cylinder held about 250,000 eggs. The trawling, dredging and collecting gear consisted of an otter trawl and three beam trawls, 9, 11 and 1 7 feet, Blake and Chester rake dredges and a tangle bar. The tangle bar was an iron axle and wheels with deck swabs or bundles of rope yarn on chains that were dragged along the rocky bottom to capture marine organisms. Hydrographic equipment consisted of a sounding machine with 600 fathoms of piano wire, deep sea reversing thermometers and density salinometers.

The Fish Hawk was designed as a hatchery ship capable of going nearshore in bays and estuaries and was not considered too suitable for offshore oceanic research. However. during her 46 years of active service she trawled and dredged out to the edge of the Continental Shelf from Maine to Florida, in the Gulf of Mexico, and off Puerto Rico. The objectives of trawling and dredging were to explore for potential fishery resources and to collect organisms for more information about the identity and life history of marine animals and plants. The Fish Hawk began her long career with the auspicious and publicized discovery of the tilefish along the edge of the Continental Shelf. It all started when a commercial fisherman, Captain Kirby, brought some strange fish to the Fish Commission's station at Gloucester. Mass. in 1879. It was a new fish, new to science and new to the fishing industry. The Fish Hawk was called upon to explore the possibilities of this new resource. Four trips were made to the edge of the Shelf in 1880 and 40 new species of molluscs and 20 new species of fish were obtained but the most important observations in this offshore region were those made on the tilefish. The known range of this valuable fish was greatly extended and its existence in fishable quantities was established.

The Fish Hawk was the first large vessel built by any nation expressly for the promotion of the fisheries. The steamers previously employed for this character of investigation had been adapted to the work by only such additions and alterations as were deemed essential. They were inconvenient at best but were made to answer the requirements with the crude appliances then available. A new era as regards the exploration and of fish culture was, however, rapidly approaching, and the building of the Fish Hawk happened opportunely with respect to the improvements made in both.