Telemetry data allows researchers to track a few hundred representative smolts each year by surgically implanting transmitters in the fish and deploying receiver networks in the water that detect the tagged smolts when they swim by - similar to an automated highway toll booth system.

Atlantic salmon were once abundant throughout the Gulf of Maine and supported historic commercial and recreational fisheries. Due to multiple causes, the number of adults returning to spawn decreased to less than 10% of previous estimates. In response, the Gulf of Maine Distinct Population Segment of Atlantic salmon was listed as endangered in 2000. Currently, many approaches are used to increase abundance, including rearing individuals in hatcheries, removing dams, and restoring habitat. In addition, NOAA is studying salmon ecology, which includes interactions with other species in estuaries and at sea.

Acoustic telemetry is one approach that allows researchers to study smolts, or juvenile Atlantic salmon, that are ready to migrate from their freshwater nursery habitat to the ocean feeding grounds. Since 2005, telemetry has been employed in Maine’s Penobscot Estuary to help understand how this part of the life cycle affects abundance. In the Penobscot River, over 500,000 hatchery-reared smolts and about 100,000 wild smolts begin their migration each April. Approximately half this number will successfully make it to the Gulf of Maine. Telemetry data allows researchers to track a few hundred representative smolts each year by surgically implanting transmitters in the fish and deploying receiver networks in the water that detect the tagged smolts when they swim by - similar to an automated highway toll booth system.

Telemetry data is normally analyzed with a combination of graphs and statistics, but Kaitlyn Lowder, a Northeast Fisheries Science Center (NEFSC) Hollings Scholar recently added a new method to better understand smolt emigration behavior and its effect on survival. She processed acoustic telemetry data using V-Track, a program designed by researchers at the University of Queensland to visualize the movements of tagged animals (Campbell et al. 2012). Smolt tracking data are complicated, but visualizations provide a tool for researchers and the public to better understand complex movements. In particular, the animations of smolts produced using this program allow NEFSC researchers to study movements in the context of both time and estuary geography. 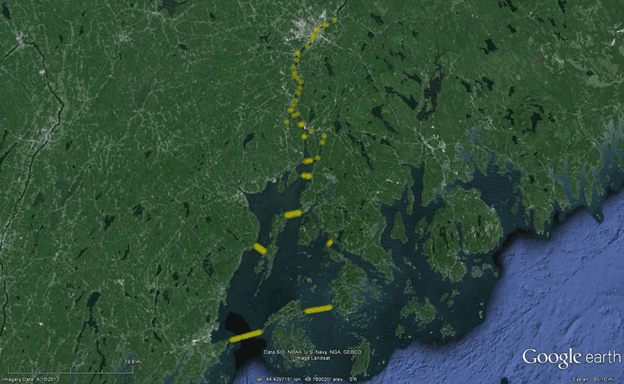 Google Earth image of the Penobscot estuary with the 2012 acoustic telemetry network.

V-Track animations are run through Google Earth and portray smolt movements from detections recorded by a network of 121 receivers deployed cooperatively by the NEFSC and the University of Maine. The animations depict smolts emigrating through the Penobscot Estuary to the Gulf of Maine over the course of several days (Figure 1). Each time an acoustically-tagged smolt is detected by a receiver, an ID number and timestamp is recorded - that receiver lights up on the screen at a corresponding time to indicate the smolt’s presence. As receivers light up onscreen, researchers are able to identify the smolt’s location for specific times and observe the path by which a smolt reaches the Gulf of Maine.

Animated visualizations allow biologists to better understand certain types of movement. As smolts near the ocean, they must adjust to increasing salinity, changing temperatures, and new food sources and predators. NEFSC researchers have observed two behaviors that may allow smolts to contend with these changes: holding (remaining within a small stretch of estuary for a few hours) and reversing (swimming back upstream to fresher water).

In this animation, light yellow circles represent fixed receiver locations. When this smolt is detected, the circles become bright red and the smolt path is traced with a white line to illustrate movements.  This animation is a time-lapse of ~16 hours that represents a smolt that held position for 6 hours within the half-kilometer detection radius of a receiver before continuing downstream.

In this time-lapse  animation of  ~16 hours of smolt movement, the light yellow circles represent fixed receiver locations. When this smolt is detected, the yellow circles become bright red while this smolt is near each receiver to visualize movements. As this smolt is moving seaward, it moves back upstream on an incoming tide and then continues back downstream and exits the Bay. This reversal  represents an 8.5 kilometer reversal that took just over 3 hours to complete.

During the emigration period, smolts may hold and reverse multiple times within the 90 kilometers of estuary and bay. Below is an animated visualization of a single smolt from its release near Bangor, ME until it reaches the outer bay and Gulf of Maine. Along the way, it performs many reversals as well as a few short holds. Like most successful smolts, it exits west Penobscot Bay, passing by the receivers on the bottom left of the animation.

In this time-lapse animation of successful Atlantic salmon smolt migration, the light yellow circles represent fixed receiver locations and when this smolt is detected, the circles become bright red while this smolt is near each receiver to visualize movements. This smolt began its journey at 9:30 AM May 2, 2012, and it exited to the Gulf of Maine at 5:30 AM on May 10, 2012 (188 hours). In total, the fish held for greater than two hours eight times and reversed six times.

In contrast to the successful smolts, a proportion of the group does not survive to the Gulf of Maine. While some may die due to physiological stress or other reasons, others are consumed by predators such as fish, seals and birds. Traditional, non-animated visualizations show uncharacteristic movements which help researchers identify predation scenarios, but with Google Earth as the background, animations assist in visualizing where in the estuary predation occurred. Smolts that reverse direction several times past seal haulouts or cormorant roosts may be at a greater risk of predation than those that only swim past once. When high mortality zones along the migration route are identified, researchers can inform managers of these areas to formulate action decisions.

The animation below shows a smolt that is making progress through the estuary for two and a half days before disappearing from the estuary. Sixteen hours later, the transmitter is detected over 30 kilometers upstream, although it does not pass by any of the receivers in the water. In scenarios like this one, researchers suspect smolts are consumed by avian predators, such as double crested cormorants, that fly upstream and eventually pass the transmitter back into the water.

In this time-lapse animation of a smolt eaten by an avian predator, light yellow circles represent fixed receiver locations. When this smolt is detected, the circles become bright red and the smolt path is traced with a white line to illustrate movements.  This smolt was released on May 1, 2012 at 7:00 AM. At 11:00 AM on May 5, 2012 (101 hours later), the smolt disappeared from the water. After sixteen hours, it was detected 30 kilometers upstream, leading researchers to believe it was consumed by a bird since it was not detected by any receivers along the way and the final transmitter location was near a cormorant roost.

Animated visualizations may also accomplish tasks that prove more difficult with other visualization methods, such as visualizing more than one smolt at the same time. In the following animation, two smolts (red and blue) are emigrating through the estuary. Both are eventually consumed by the same predator (fish graphic), perhaps a striped bass or seal. The predator then reverses direction over large distances several times, movements highly unlikely for two smolts.

In this time-lapse animation of two smolts eaten by a single predator, the light yellow circles represent fixed receiver locations. Two smolts are tracked in this figure, the circles become either bright red  (smolt 1) or bright blue (smolt 2)  while each is near a receiver  In this instance, the speed of the transmitter in smolt 2  (blue) exceeds smolt swim rates around 1:00 AM on May 6, 2012, just 59 hours after it was released. This leads researches to conclude a larger fish consumed the smolt. Twenty-nine hours later, the same  predator appears to have consumed smolt 1 (red) and the two transmitters are now detected synchronously for the duration of the track.

Animated visualizations can also be used to show the output of modeled fish migration patterns. There are no telemetry receivers along the migration route from the Gulf of Maine to the Scotian shelf, yet some smolts may be detected when they pass by the Halifax, Canada receiver line - part of the global Ocean Tracking Network. This journey is also a perilous period in a salmon’s life, so NEFSC collaborator Carrie Byron used temperature, currents, and bioenergetic models to predict how smolts might travel from the Penobscot Bay to the Scotian Shelf (Byron et. al 2014). These models suggest that once smolts enter the Gulf of Maine, they may continue northeast on trajectories relatively close to shore as they navigate towards coastal feeding areas near Labrador.

This animation shows selected examples of slow, medium, and fast migration paths of virtual salmon tracks from Penobscot Bay to Halifax Line. It is a compilation of nine potential migration routes generated by a computer migration model that creates thousands of potential routes bounded by swimming limitations, growth, and seasonal oceanographic changes. In this example, three representative fast (~15 days), medium (~25 days), and slow (~35 days) virtual migrations are illustrated. These models help to estimate the most probable routes used by smolts that successfully reach the Halifax line and help generate a better understanding of potential habitat use during early ocean migration.

V-Track visualizations have provided a novel way to assist researchers in studying many aspects of an Atlantic salmon’s first journey to the ocean. Emigration timing, predator and prey interactions, and behavior all play a determining role in a smolt’s success - or failure. In the future, animations may incorporate estuarine fish community biomass, predator survey data, and environmental parameters to better understand ecological interactions. Visualizing migration and movement data allow for well-informed policy decisions that benefit not only this endangered species, but the entire ecosystem and community.