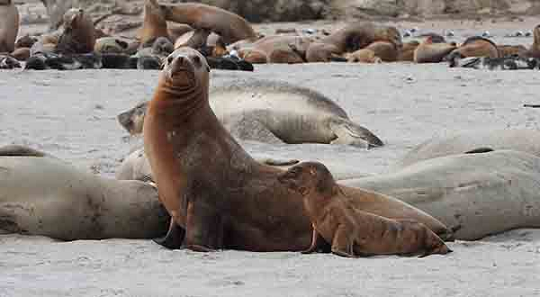 Booming sea lion numbers combined with declines in the highest-calorie prey around the Channel Islands breeding rookeries have left nursing females struggling to support the nutritional needs of their pups, according to a new study published today in Royal Society Open Science.

The study by NOAA Fisheries scientists is the first to analyze changes in fish populations sea lions prey on for clues as to what is causing the record strandings. Scientists examined changes in the abundance of four of the main sea lion prey species: sardine, anchovy, rockfish, and market squid over the 2004-2014 time period. They found that high-calorie sardines and anchovies, both rich in fat that is vital to the growth of young sea lions, have declined since the mid-2000s in the areas around the Channel Islands where the females forage. That has forced the female sea lions to prey instead on market squid and rockfish, which contain far less fat and fewer calories.

“When you have hundreds of thousands of animals to feed and you have a fluctuating prey base that has trended downward, you are going to have starving animals,” said Sam McClatchie of NOAA Fisheries’ Southwest Fisheries Science Center in La Jolla, Calif., and lead author of the new research. “Sardines and anchovies have both trended downward, and that compounds the problem for the sea lions.”

The scientists did not study how changes in prey species affect the composition and quality of milk that female sea lions feed their pups, which affects the growth of the pups. However, the close correlation between the fish available and the weight of sea lion pups provides "compelling evidence of a food limitation effect on the weight of dependent pups," the scientists wrote. The trends in the relative abundance of forage taxa highlights a decade-long decline in the availability and quality of forage for sea lions.

Nature, in effect, has put the sea lions on a low-calorie diet. Market squid, for instance, contains less than half the calories and about one-tenth of the fat content by weight compared to sardines. While adult males and females without pups can survive on a low-calorie diet, lactating females and their dependent pups seem to be sensitive to reductions in high-calorie prey. The results build on earlier studies at San Miguel Island that showed pup weights decrease during El Niño events and when the female diet, as determined from scat analysis, was predominantly squid and rockfish. 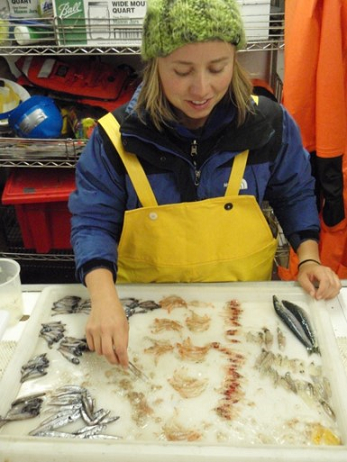 The long-term and widespread nature of the changes in prey suggest that environmental shifts are driving them, the researchers concluded. Although sardines have been subject to limited fishing pressure, anchovies were much more lightly fished prior to 2013; yet both populations have declined.

“The overall driver appears to be the natural fluctuations in fish populations,” McClatchie said. “They do fluctuate up and down over time, and since 2004, they're doing it in phase.”

Sea lions are not endangered but are protected by the 1972 Marine Mammal Protection Act. Their population has grown from about 50,000 to over 300,000 in the last 40 years, and is expected to ultimately fluctuate around a still-unknown carrying capacity, the researchers said. The carrying capacity would be expected to vary with climate and ocean conditions.

“Given the likelihood that the California sea lion population is approaching carrying capacity, density-dependent effects such as food limitation (and stranding) of pups may be a long-term consequence of a rebuilt sea lion population during periods of low abundance of high-quality forage,” the scientists wrote.

Sea lions have faced similar declines in sardines and anchovies during previous El Niño conditions, but the shifts are not limited only to El Niño periods, the researchers found. The latest spike in sea lion strandings began before the current El Niño pattern took hold, and before the large expanse of warm water known as “the blob” began dominating West Coast waters in 2014.

The results refocus the debate on the causes of sea lion pup weight loss from episodic stresses associated with El Niño years to a decadal-long trend of declining forage quality in the waters around the California Channel Island rookeries, the researchers wrote. The large areas where surveys documented declines in sardine and anchovy and increases in market squid and rockfish suggests that the drivers for these forage trends are environmental.

Both the warm blob and El Niño events may continue to disrupt historical spawning times and locations of sardine and anchovy populations. It is unknown how long low-quality forage abundance will persist. Recently completed NOAA Fisheries surveys suggest that while both sardine and anchovy populations have trended downward in recent years, the 2015 numbers of anchovy larvae appear to be stronger than in the past 10 years along portions of the U.S. West Coast. Sardines, which normally spawn off central California in spring, last year spawned off Oregon. However, there is uncertainty whether the young anchovies and sardines that were observed will successfully mature into the adult populations.

NOAA Fisheries surveys and stock assessments continue to track the status of sardine, anchovy, and other coastal pelagic species, while monitoring the health and abundance of sea lion populations, to provide data for the public

As part of our Marine Mammal Health and Stranding Response Program, NOAA Fisheries works closely with regional coordinators at partner organizations to respond to stranded marine mammals. Trained specialists attend to stranded animals to assess their condition and determine the best way to save them, which includes considerations such as how ill they are, if there is space at an animal hospital where they can be nursed back to health, and if there are other healthy animals close by that should not be disturbed. Remember, do not interact with wild marine mammals and view marine mammals in a manner that does not harass the animals. To report a stranded animal, contact a regional coordinator.