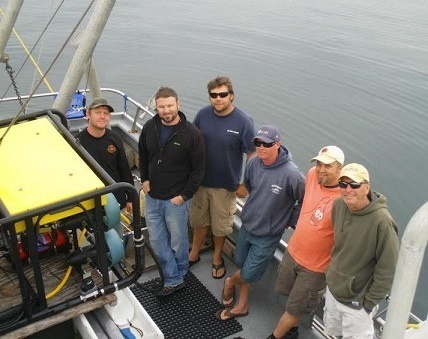 Abalone Team with the ROV.

Fisheries biologist Kevin Stierhoff and his colleagues are tracking populations of one of the most endangered invertebrates in the sea, a relative of snails and slugs that lives at depths as great as 60 meters (ca. 200 feet) off Southern California and Mexico. The enigmatic animals are well camouflaged; their shells are brownish and covered in algae like the rocks upon which they live, making them quite difficult to spot.

They are searching for white abalone, which is now believed to be near extinction. Only a few thousand animals are thought to remain off Southern California. Abalone move slowly, creeping along with a powerful muscular foot covered by a hard round shell.

Spotting even one counts as a minor victory, but those occasions come more and more sporadically.

“They’re cryptic,” says Stierhoff of the SWFSC’s Advanced Survey Technologies Remotely Operated Vehicle (ROV) Team. “It takes a trained eye to pick them out.” White abalone are among the deepest dwelling species of abalone, which made them harder for harvesters to collect and among the last abalone species to be exploited for their tasty meat. Their occurrence in deeper habitats also makes it more difficult for scientists to monitor their populations using traditional methods such as SCUBA diving.

To aid their efforts, Stierhoff and his team bring to bear the latest technology: sonar, lasers, lights, fiber optics, and high-definition cameras attached to an ROV, designed and built by NOAA Fisheries’ Southwest Fisheries Science Center. The yellow and black submarine operates tethered to a vessel on the surface where scientists look closely at a video feed from its camera.

The team often sees what they call “home scars,” bare spots left on rocks where abalone feed for long periods of time. Two lasers spaced 20-centimeters apart shine bright dots on the sea floor to help scientists estimate the size of the slow-moving animals they spot. 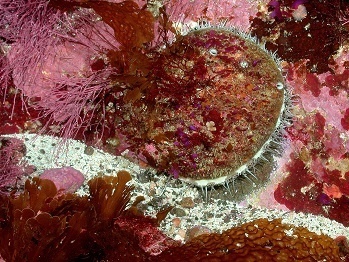 White abalone supported a brief but intense commercial fishery in southern California during the early-1970s. Overfishing is thought to have reduced the density of abalone to the point where males and females were too far apart to reproduce, which now threatens to drive the species to extinction. In 2001, the species was listed as endangered, a protective step that managers hoped would help white abalone to recover on its own once harvest ended.

The ROV surveys conducted by NOAA help to identify any trends in the population.

The survey team steers the ROV along linear transects in the rocky habitat that white abalone frequent, using their counts to develop density estimates that would indicate whether numbers are rebuilding. But so far there has been little evidence of that. The ROV surveys in several key habitat areas off Southern California have demonstrated just how scarce white abalones have become. The last survey by Stierhoff’s group spotted about 80 abalone and almost all of them were alone. Indeed, results of their surveys document a continuing decline of some 75 percent of white abalone in some of the areas examined.

“Almost all of the white abalone that we see are solitary,” Stierhoff notes. That is important because to reproduce the abalone release eggs and sperm into the surrounding water in what is known as “broadcast spawning.” With so few white abalone near each other the concentrations of sperm needed to successfully fertilize free-floating eggs are unlikely to occur. 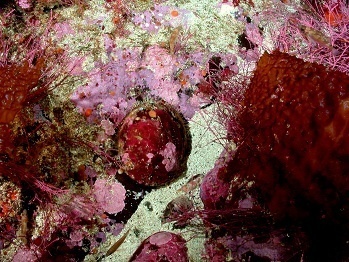 Most of the abalone they see are large and likely near the end of their lifespan of 25 to 30 years. They see very few small abalone, underscoring the likely lack of reproduction. While the surveys have turned up few abalone, that’s important information that helps biologists understand the state of the species, the habitat best suited for future supplementation and the steps necessary for recovery.

“Even if natural recovery of white abalone is occurring, it’s happening too slowly to give the species the foothold it needs to weather future threats and remain viable over the long term,” says Melissa Neuman, abalone recovery coordinator for NOAA Fisheries’ West Coast Region. The best way to safeguard white abalone now is a captive breeding program aiming to produce young abalone that can be used to supplement wild populations to the point that densities are high enough to sustain a healthy and prolific population.

“We will continue to monitor wild populations and their habitat using the ROV, at the same time we continue captive breeding programs, since both are necessary to ensure the successful recovery of the species,” Neuman said.