NWFSC scientists and partners are deploying a state-of-the-art robotic sensing unit to provide an early warning of harmful algae and pathogens in Puget Sound. 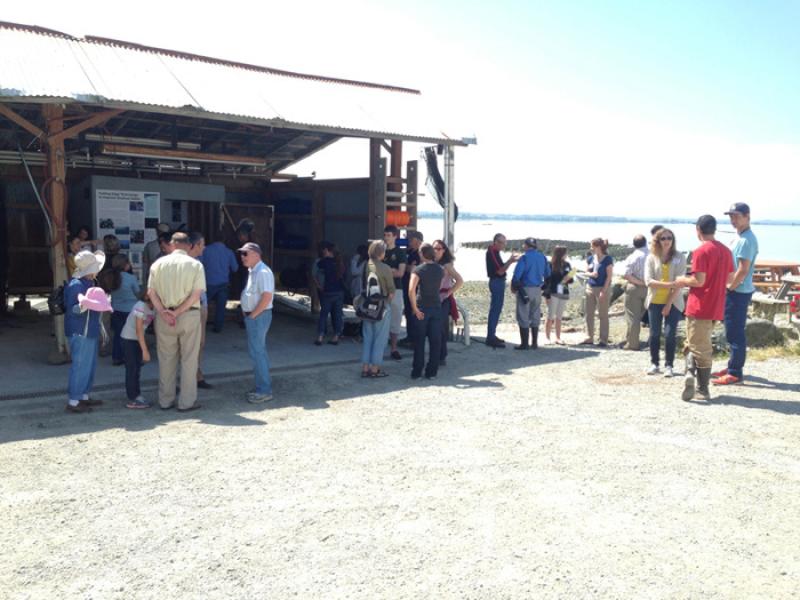 The robotic sensor, called the Environmental Sample Processor (ESP), uses molecular probes to detect microorganisms in water by their DNA, and can provide scientists with near real-time information on our water quality before shellfish and fish are contaminated. Decision-makers like public health officials and shellfish growers can then use this data to help improve the safety of our local seafood, help protect the economic stability of waterfront businesses and the aquaculture industry, and alert water enthusiasts.

Scientists deployed the ESP in Lummi Bay on June 20 and in Samish Bay on July 16 to detect the presence of harmful algae species Heterosigma akashiwo, Pseudo-nitzschia australis, and Alexandrium. At the Samish Bay site, scientists are also targeting the bacterial pathogen Vibrio parahaemolyticus as well as indicators of human and bovine fecal contamination. Live feeds of the data are already available for Lummi Bay (see Quick Links) and will soon be available for Samish Bay.

The shellfish in Samish Bay, like in many basins of Puget Sound and other waterways globally, are threatened by pollution from many sources. Picture a large sink with Samish Bay as the drain. Any pollutants in the entire watershed can impact water quality in Samish Bay, including runoff from streets, agricultural practices, forest practices, animals in streams (wild and domestic), failing septic systems, and erosion. Boats without holding tanks for their sewage and other recreational users improperly disposing of their waste also impact the bay's water quality.

Pacific oysters and manila clams are cultured extensively in Samish Bay. These species as well as geoduck, horseclams, butter clams, cockles, and native littleneck clams are harvested recreationally. These shellfish are all filter feeders, feeding on microscopic algae (plankton) in the water.

Naturally occurring harmful algae and bacteria can sometimes "bloom" in coastal waters, growing rapidly and often increasing in concentration. These harmful microorganisms — and the toxins that they produce — become concentrated in shellfish from the large volumes of water that they filter when feeding. Eating the contaminated shellfish can make us very sick.

To protect people from getting sick, shellfish are routinely monitored for harmful algal toxins and bacteria. Shellfish are not commercially harvested or sold when regulatory thresholds are exceeded. However, sometimes blooms can occur with little or no warning resulting in costly recalls of contaminated product from the market.

Value of the ESP's early warning

Every year, harmful algae and bacteria cause millions of dollars in damages to commercial fisheries and aquaculture, public health, and the recreational and tourism industries around the nation. Yet, we do not have reliable ways to predict when they will occur. Early warning of these harmful blooms can reduce consumer and economic risks by triggering increased site surveillance and allowing for mitigation strategies to be put into place.

Because the ESP can detect harmful algae and bacteria in the water in near real-time, it can provide early warning of developing blooms before they contaminate aquatic life. This information can help shellfish growers and health managers make decisions about harvesting and monitoring strategies to ensure that the seafood we eat are safe and potentially saving the aquaculture industry and other businesses — and the public — millions of dollars annually.