Feeds of the Future

To ensure a sustainable future for aquaculture, scientists are developing alternative aquaculture feeds that use few or no ingredients from wild caught fish.

Feeds of the Future

Host: How are we going to feed all the people that are expected on this planet over the next few decades? The human population is expected to grow by a third between now and 2050. But even more importantly, billions of people are moving out of poverty and into the global middle class. When they get there, they’ll be ordering the good stuff, and that means more meat and more fish.

So even though the population is going up by 30 percent, world demand for animal protein is expected to go up by 75 percent by 2050. We’re going to have to almost double the amount of animal protein that the world produces in the next 35 years. Doing that without wrecking the planet is one of the most important challenges facing humanity today.

One thing that is sure to be part of the solution: aquaculture. It’s the fastest growing form of food production in the world. But to grow fish, you need to feed them. And, currently, that means you need fish meal. But when it comes to fishmeal…

Mike Rust: There is only so much of it.

Mike Rust: Increasing demand with steady supply of fishmeal, that’s what is creating this sustainability issue for feed.

Host: Fishmeal comes from a small fish like anchovies and menhaden, things that people don’t traditionally like to eat. Those fish are ground up to produce fishmeal and fish oils. Not all of that goes to aquaculture. Some of it also goes to pig and chicken farms and to make fish oil pills. But, the supply hasn’t changed in 20 years, and it’s not going to change because we’re already taking just about as many of those small fish as we can sustainably.

So, if aquaculture is going to continue to grow, we’re gonna have to come up with alternative feeds that don’t rely on wild capture fisheries as much as they do today.

Rick Barrows: And so if we can find more cost-effective replacements that we don’t have to harvest from the sea, then we win on several fronts.

Host: That’s Rick Barrows, a fish nutritionist with the U.S. Department of Agriculture. USDA and NOAA Fisheries have teamed up to solve the supply and demand problem. Their collaboration is called the NOAA-USDA Alternative Feeds Initiative.

Rick Barrows: Well, actually fish don’t require fishmeal or fish oil. They require nutrients, not ingredients. And the way we were able to develop a plant-based feed is by looking closely at fishmeal and seeing what nutrients fishmeal has been providing that our plant ingredients, or other animal products don’t have, and then supplementing those diets.

Host: Two types of nutrients they need are proteins and fish oils. Getting the right amount and mix and proteins is relatively straightforward. Scientists are looking at insect meal, at algae, and also at everyday crops like soy and barley. But, really, proteins are the easy part. Getting fish oils into the diet of farm-raised fish is a bit more complicated.

Rick Barrows: Yes, but that is the major challenge. And proteins really isn’t the problem, but it’s the fish oil replacement that’s very difficult to get those essential fatty acid such as EPA and DHA that are heart-healthy and brain-healthy, to get those at a high enough level in the fish to impart that healthy characteristics to the consumer.

Host: Barrows mentioned EPA and DHA. Those are the omega-3 fatty acids that are so good for you. We want our seafood to be rich in these compounds, and farm-raised fish won't have a lot of omega-3s unless they get enough omega-3s in their diet. Again, Mike Rust...

Mike Rust: Fish do require omega-3 fatty acids, but they require fewer than what we would like them to have for human health. So, there is a danger that you could raise a fish and have low omega-3 fatty acids in the flesh. And then it would have the nutritional value of, well, something a little bit better than chicken. It’s still gonna be a nice lean protein, but it’s not gonna have that super foods status.

Host: So where can we get fish oils to put into fish feeds? Algae contain omega-3s, so that’s one possible source that scientists are looking at. There are also genetically modified soy in other crops that produce their own omega-3s. But those options are still a ways off. In the meantime, though, there are fish trimmings. That’s the stuff that’s leftover after you filet the fish.

Big fish processing plants already render their trimmings, and sell the fish meal and oils to feed manufacturers. But at smaller operations, there is currently no economical way to do that. So, most of it gets landfilled or dumped back into the ocean. The amount of waste is tremendous. If all the fish trimmings currently being wasted in Alaska were captured instead, it would be the second largest fishery in the state.

Pete Nicklason: Well, if it’s such a wonderful nutritional product, how come so much is underused, thrown away?

Pete Nicklason: One of the processes we developed here at the Northwest Fisheries Science Center is you can take the fish heads and guts and backbones and fins, or, you know, whatever they’re cutting, and then grind it upCrun it through a grinder, throw it in a mixer, and you add a little bit of organic acid. And what that does is it just preserves it. It’s just like yogurt. Yogurt is preserved with organic acid.

Host: The two acids they use are propionic acid—that’s what makes Swiss cheese smell like Swiss cheese—and phosphoric acid, which is what gives Coca-Cola its slightly acidic flavor.

Pete Nicklason: So once you mix it in with the fish, just stick it over in the corner and it’ll just sit there. And a week later, you can stick your face right in it, and you won't smell anything.

Host: Nicklason and his colleagues at NOAA’s Northwest Fisheries Science Center are also developing small-scale machines to dry and powder the preserved fish "yogurt". The idea is that smaller producers can accumulate the trimmings over a week or two, and then when they have enough, they can fire up the machines and produce a shelf-stable powder, and they can sell that to feed manufacturers.

You know, we’re not just doing this to save the world—aquaculture is a huge business opportunity. The U.S. imports over 90 percent of its seafood. But we’re an agricultural superpower, and there’s no reason that shouldn’t be true for aquaculture as well.

Pete Nicklason: We would like to be able to produce seafood here sustainably and to provide a safe food supply for the American consumer. If we could raise it here, it could be cheaper, it could be healthier, and more sustainable.

Host: Aquaculture’s use of fishmeal and fish oil peaked in 2006, and it’s been coming down since thanks to new feeds and better recapture of fish trimmings. That’s being driven by economics because this stuff is expensive. But it’s also being driven by technology, and thanks to the work of scientists, like the ones you heard from today, that trend will continue and even accelerate. Any last thoughts from the scientists?...

Mike Rust: Just that I think that there’s hope. You know, there are things we can do. We hear so much doom and gloom out there, and this is a good news story. And I know good news stories don’t sell newspapers, but you know I think it would be important for your listeners to understand that there are things we can do to provide a high quality food for human beings, and not screw up the environment. You know, we can do this right.

Host: I think I’ll sign off on that positive note. As always, you can get more of this story on our website. That’s www.fisheries.noaa.gov/podcasts. There you’ll finds some photos, as well as more information on the Alternative Feeds Initiative.

Thanks for listening. Join us again next time for more stories about ocean life and ocean science. I’m Rich Press, and you’re listening to "On the Line". 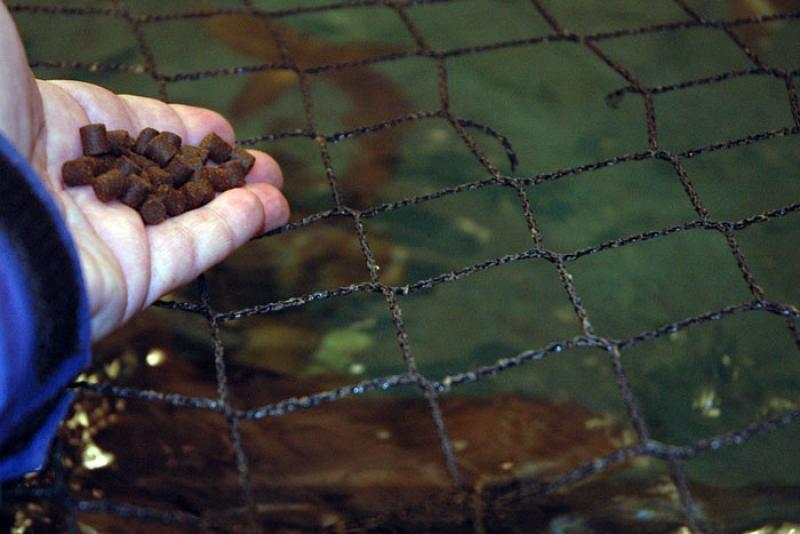 How are we going to feed all the people that are expected on this planet over the next few decades? The human population is projected to grow by a third between now and 2050. But more importantly, billions of people are moving out of poverty and into the global middle class. When they get there, they'll be ordering the good stuff, and that means more meat and more fish. So even though the population is going up by about 30%, world demand for animal protein is expected to go up by 75% by 2050. Satisfying that demand without wrecking the planet is one of the most important challenges facing humanity today.

One thing that's sure to be part of the solution: aquaculture. That refers to growing fish, shellfish, seaweed, or anything else in water, and it’s the fastest growing form of food production in the world.

When it comes to fish farming, aquaculture diets currently use fishmeal and fish oils that come from wild capture fisheries. But the supply of those ingredients is limited and has not changed in twenty years. So if aquaculture production is going to continue to grow, we have to come up with alternative feeds that rely less on wild capture fisheries.

To solve this problem, researchers from NOAA Fisheries and the U.S. Department of Agriculture have teamed up to create what they call the NOAA-USDA Alternative Feeds Initiative.

With direction from this initiative, scientists are developing plant-based feeds with the right balance of proteins to replace fishmeal in aquaculture feeds.

But proteins are the easy part. A more difficult challenge is to find an alternative source for the fish oil used in feeds, and the initiative is looking into that as well. Fish oils provide fish with the omega-3 fatty acids that are so good for you. If we want our farm-raised fish to be high in those omega-3’s, we have to include sufficient omega-3’s in their diet.

One important source for both fishmeal and oils is fish trimmings—the head, skin, guts, and whatever else is left over once you cut out the filets. Large fish processing plants already render their trimmings into fishmeal and oils. But at small and medium-sized operations there’s currently no economical way to do that, and the trimmings get landfilled or dumped back into the ocean. The amount of waste is tremendous. If all the fish trimmings that are currently discarded in Alaska were captured instead, it would be the second largest fishery in the state.

Scientists with the Alternative Feeds Initiative are working on new techniques and machines that will make processing fish waste into valuable, marketable products economically feasible at all scales.

"It's got to make business sense," said Mike Rust, a fish nutritionist with NOAA Fisheries. Once it does, market forces will do the rest.

Last updated by Office of Communications on March 11, 2021