NOAA Fisheries scientists keep track of how many gray whale calves are born each winter, and it looks like this was a banner year for calf production.

Rich Press: Every fall, Gray whales migrate from their summer feeding grounds in the Arctic to their breeding and calving grounds in lagoons off Baja, California in Mexico. Every spring, they turn around and make the reverse trip. And every year, NOAA Fisheries scientists stand on the beach in California and count the number of newborn calves heading north. This year's Gray Whale Calf Survey just wrapped up, and according to Wayne Perryman, a biologist with NOAA's Southwest Fisheries Science Center in La Jolla, California, it looks like this was a banner year for calf production.

Wayne Perryman: This year we counted 431 calves, which is a really big number. This is the fourth highest count in the time series.

Rich Press: Perryman leads a small group of scientists who specialize in monitoring the health and abundance of whales and dolphins.

Wayne Perryman: This was our twenty first year, 21 consecutive years of counting northbound cows and calves. The idea is to estimate total calf production of the Eastern North Pacific population based on counts of animals as they go north back to Alaska.

Rich Press: Scientists count the calves from a point of land along the Central Coast of California. They're easy to count because, unlike adults and juveniles, which migrate a half-mile or more offshore, cows and calves stay in close.

Wayne Perryman: The cows and calves migrate almost right in the surf line. I mean they pass the point where you can hit ‘em with a potato, I mean they’re very , very close. And we suspect that migratory corridor allows them to avoid detection by predators and those are killer whales.

Rich Press: Of course, the calves are particularly vulnerable to killer whales, and being close to shore helps the mothers and calves avoid detection. That's because killer whales use their sense of sound to home in on prey, and for the gray whales, the noise of the surf might provide a sort of camouflage.

Wayne Perryman: Also when killer whales attack gray whales, the gray whales, if they can, run to shallow water, because killer whales like to come up from underneath. So for instance, if there are killer whales around, we can tell because the cows and calves will move up close to the beach. I mean just right in the rocks, and they’ll just stay almost motionless,and then they’ll come up and take a tiny breath and then they'll sink. So they’re clearly hiding.

Wayne Perryman: If you’re going to monitor populations, if you’re going to manage them effectively you have to ask questions beyond just how many are there. If something's happening to the population, trying to detect that symptom in abundance estimates is a pretty tough thing to do, unless something catastrophic happens. One of the reasons we monitor calf production every year is we think we’re much more likely to detect how these animals are responding to changes in their environment by looking at reproduction, which is a very sensitive part of their life history, than we will if we just tracked abundance.

Rich Press: One of the biggest environmental changes that gray whales are dealing with is climate change. Gray whales are Arctic animals. They feed mainly in the Arctic, and they fast through most of their migration.

Wayne Perryman: And the Arctic is where the most obvious impacts of climate change are taking place, so studying gray whales allows us to look at how the Arctic is changing as a result of climate change, without having to field an Arctic field program, which is really expensive. So, we can look at gray whales, they’re going up there, integrating climate change, and then they swim right past our door, and we can ask questions about their condition and the status of their population for very little cost.

Rich Press: One thing scientists are looking at is the relationship between the timing of the ice melt in the Arctic in spring, when pregnant females are trying to make it to their feeding grounds, and the number of calves that are born the following year. I asked Perryman why it's important that we keep track of all this stuff.

Rich Press: This population of gray whales was taken off the endangered species list in 1994, almost a century-and-a-half after whalers started hunting them in big numbers, nearly wiping them out.

Wayne Perryman: They were really decimated. Around the 1850s, the whalers found the calving lagoons, so they could take their sailing ships into the lagoons, and it was just a massacre. And the whales they were taking were cows with calves, so they just knocked out the reproductive part of the population, and that drove the population down to maybe a couple thousand animals, maybe as low as that. And they've recovered really well, they’re a real success story as far as the management of large whales goes, and now the population is up around twenty thousand, and that appears to be pretty stable.

Rich Press: Unfortunately, the news isn't quite so good for all whales. There's a second population of gray whales that lives on the other side of the Pacific, off Asia, that remains endangered. And of course, in U.S. waters, many populations of large whales, including fin whales, blue whales, and right whales to name just a few, remain on the endangered species list as well. But the recovered U.S. population of gray whales, and the 431 calves that scientists counted during their recent spring migration, are a reminder that conservation can succeed. Legal protections, public education, and the preservation of marine ecosystems have all helped bring these animals back from the brink. Let's hope that, with continued effort, we will someday be able to say the same for all species of whales. 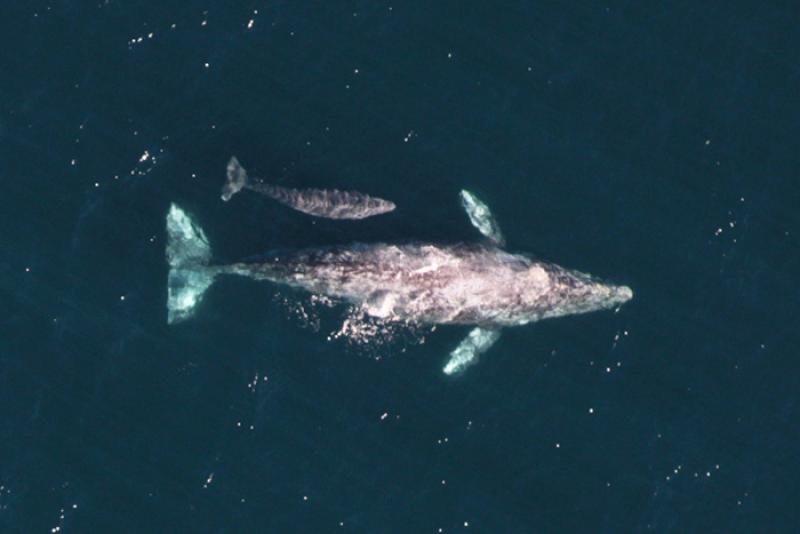 Every fall Gray whales migrate from their summer feeding grounds in the Arctic to their breeding and calving grounds in lagoons off Baja, California, in Mexico. Every spring, they turn around and make the reverse trip. And every year, NOAA Fisheries scientists stand on the beach in California and count the number of newborn calves heading north. This year's Gray Whale Calf Survey just wrapped up, and according to Wayne Perryman, a biologist with NOAA's Southwest Fisheries Science Center in La Jolla, CA, it looks like this was a banner year for calf production.

The Eastern Pacific population of gray whales was reduced to a few thousand during the whaling days, but unlike many populations of whales, this one has recovered. They were removed from the endangered species list in 1994, and today they’re holding steady at about 20,000.

Unfortunately, the other population of gray whales, on the Asian side of the Pacific, is not doing nearly so well.