Transcript: Harmful Algal Blooms, A Sign of Things to Come?

Rich Press: A vast bloom of poisonous algae is still lingering in the ocean off much of the West Coast. Scientists call these things harmful algal blooms, and this one shut down most crab and shellfish fisheries in the region last year to make sure no one got shellfish poisoning. Harmful algal blooms happen when a species of algae that produces toxins grows out of control, and with climate change warming the ocean, it's likely that we'll see more of these blooms in the future. At NOAA Fisheries, part of our job is to help coastal communities adapt to climate-related threats, and I wanted to know what we're doing on the harmful algal bloom front. To find out, I called Vera Trainer. Dr. Trainer is an oceanographer at NOAA's Northwest Fishery Science Center in Seattle, and my first question for her was, what caused this thing?

Vera Trainer: The one that happened on the West Coast this (last) year, we think it was basically lurking off shore in the warm water mass. There was an anomalously warm water mass called "The Blob", so the cells were just residing there. They were just basically living in this blob, but not at high numbers. Then when we had springtime upwelling conditions, that is, when nutrients come from the bottom to the surface, these cells just exploded into a bloom.

Rich Press: This bloom was really giant. It reached from Southern California all the way up to Alaska, and I know if you eat shellfish that's been contaminated by the toxins that can be extremely bad news, fatal even, and I know it can be bad news for marine mammals that prey on shellfish as well. They can also get sick or die. Do shellfish consumers need to worry?

Vera Trainer: Seafood consumers don't need to worry about the shellfish that they buy in the stores. Every state has a regulatory authority that measures toxins in seafood. So, for example, the Dungeness crab in California are tested by the California Department of Public Health. So, what is in the market has been tested and is absolutely safe. What we do need to worry about is our changing ocean ecosystem. This is a sign, potentially, of things to come.

Rich Press: I imagine that one group of people that must be worrying about what this means for the future is fisherman. The Dungeness crab fishery is one of the biggest on the West Coast, and it was completely shut down.

Vera Trainer: Yeah. It's the largest fishery in Washington and Oregon, and second only to squid in California. And it just breaks my heart hearing about, especially the smaller fishers that are waiting for the fishery to open. Another group that's really heavily impacted by these closures are tribes. In Washington State we have the Quileute and the Quinault. They rely on Dungeness crab and razor clam for a major protein source. We're doing our best to understand. We're doing our best to know when these blooms are there. There is also a program at NOAA looking at mitigation of these blooms, controlling them using bacteria, viruses, things like that. But it's gonna be a few years before we can do anything like that.

Rich Press: Yeah. In the meantime, I heard that another thing we're working on is a robot that we can send out into the water. It's got some kind of chemistry set inside of it and it goes around testing the waters. Tell me a bit about that.

Vera Trainer: Well, there's one in particular called the Environmental Sample Processor that is being placed out in the coastal ocean next year. With this particular machine we can monitor both toxic cells and the toxins they produce. We can sit at our desk drinking a cup of coffee and query this machine and ask it, are the cells there? Are they there now? Oh, if they are, okay, take an extra sample because we want to know how serious this is.

Rich Press: Wow. That's awesome. That's kind of like what I imagine the rover in Mars is doing, looking for a single cell or something.

Vera Trainer: It's exactly like the Mars rover. The ocean is very much like analogous to our Mars. It's just so difficult to sample in the ocean, so we're trying to use a number of remote technologies that will compliment what we already have in place on the beaches.

Rich Press: So, I imagine that this is kind of new technology, but is the vision that some day we might have a fleet of these things out there?

Vera Trainer: Yeah. That's what we're hoping, that we will have this array that is gonna be able to alert us to what happens in multiple hot spots that are off our coast.

Rich Press: So, Vera, I know you're a scientist, so you're in the business of discovery. What's the one thing you wish you knew about harmful algal blooms that you don't currently know?

Vera Trainer: Yeah. I think if we knew exactly why cells were making toxin we might be able to better control them. I mean, there are some species that always produce some toxin, but there are conditions that make them more toxic, and this is something that we're really actively researching. If we had a better understanding of why these toxins are being made, I think we would have clues into how to better mitigate and control them.

Rich Press: That was NOAA Fisheries oceanographer Vera Trainer on the front lines of climate adaptation. For more information about harmful algal blooms and what we're doing to help manage the effects, check out our podcast page. That's www.fisheries.noaa.gov/podcasts. You'll also find there's some information on how harmful algal blooms affect marine mammal populations, a really important topic that I didn't get to discuss in this podcast.

Thanks for listening. Join us again next time for more stories about ocean life and ocean science. I'm Rich Press, and you're listening to "On the Line." 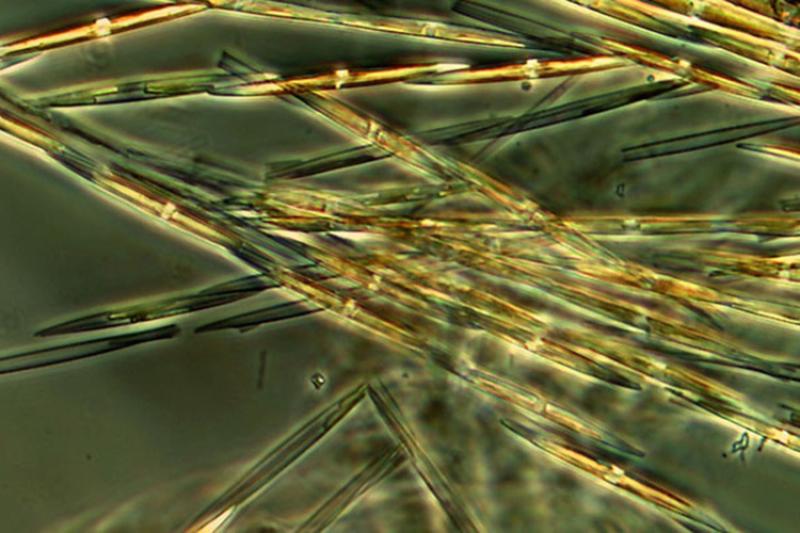 Last year, a vast mass of poisonous algae bloomed off the West Coast, from California to Alaska. One of the largest of its kind ever recorded in the region, the bloom shut down shellfish fisheries all along the coast, impacted the livelihoods of fishermen, and threatened the health of many marine mammals.

Harmful algal blooms happen when a species of algae that produces toxins grows out of control. Although last year’s bloom has begun to subside, and Dungeness crab and other valuable fisheries have begun to re-open, climate change is still warming the ocean. Warmer water means faster-growing algae, and if climate projections are correct, it’s likely that we’ll see more of these blooms in the future.

Vera Trainer is an oceanographer with NOAA’s Northwest Fisheries Science Center (NWFSC) in Seattle. In this podcast, Trainer describes some of the measures that NOAA Fisheries and other agencies are taking to help coastal communities adapt to a changing future.