It’s both. So, the salmon are being affected by the contaminants but then when the Killer Whales eat the salmon those contaminants also build up in their blubber stores. There was a study several years ago. It was by Jessica London and researchers at the Northwest Fisheries Science Center and the Alaska Fisheries Science Center found that in years of low Chinook Salmon abundance the Killer Whales had higher levels of circulating contaminants. And so, you know the impact of low prey is compounding the affect of the contaminants. And that happens because when there isn’t enough food to eat whales are using their blubber stores. So, that is getting mobilized and so the contaminants are then circulating.
00:07:48:09 (John Sheehan)
So, are you saying that because they’re not eating as much, they have to use more of their Killer Whale fat and that’s got contaminants in it too and that’s creating more of a problem?
00:08:01:05 (Dr. Megan Wallen)

That’s right. Yeah so, when those contaminants are being circulated through the system that’s impacting all sorts of physiological functions. And in reproductive females those contaminants get offloaded to their calves through the milk. And so, young calves are also being impacted by these high contaminant levels.
00:08:23:09 (John Sheehan)
Yeah so, are the declines adults getting sick and dying? Or is it calves either not being born or dying too young?
00:08:35:00 (Dr. Megan Wallen)
Yeah, it’s still and open question and that’s something that a lot of researchers are still looking at. You know essentially is the lack of recovery due to survival or mortality or is it due to low reproduction? And there’s evidence pointing to the fact that it’s actually a low fecundity rate. So, low reproduction and survival of young calves that’s influencing the population size and the decline that we’re seeing.
00:09:04:09 (John Sheehan)
You mentioned the main threats of prey availability and human interaction and contamination of their environment. Is one the culprit or is it in that order of severity?
00:09:20:06 (Dr. Megan Wallen)
You know it’s a tough issue because there really is no silver bullet, especially because all of these impacts can compound each other. And so there’s really not one major threat that we can point to that’s causing the lack of recovery in this population. And so, we need to invest our resources from all angles to give the whales the best chance of recovering.
00:09:45:05 (John Sheehan)
Speaking of compounding problems; how is climate change or shifting ocean conditions affecting the population?
00:09:53:00 (Dr. Megan Wallen)
So, there’s no doubt that climate change is impacting the marine environment where the Southern Residents live. But it’s hard to pinpoint one specific aspect that’s impacting the whales directly. Although it almost certainly has played a role in the lack of recovery that we’ve seen in the population over the last fifteen years or so. But we can say that climate change is impacting the salmon populations that they feed on. For example, climate change affects both the sea surface and freshwater temperatures, stream flows, things that are really important for salmon spawning success and their survival. For example, warming water temperatures in the streams affect the out-migrating juvenile salmon in their survival. And plus, there are cumulative affects that are seen across the different life stages of salmon as they’re exposed to more stressors, being in both the fresh water and marine environments.
00:10:52:05 (John Sheehan)
And what’s the status of the Chinook Salmon population now?
00:10:57:04 (Dr. Megan Wallen)

Salmon in the Puget Sound and west coast wide are historical lows. In particular the Puget Sound Chinook Salmon stocks which are one of the preferred prey of Southern Residents; they themselves are listed as threatened under the Endangered Species Act. So, it’s a complicated issue where you have endangered predator feeding on you know a threatened species. And so, there’s extensive efforts coast wide to restore habitat and rebuild the salmon populations that are important not just for the Killer Whales but for the economy, for tribal culture, subsistence, and of course the marine and the river systems as a whole.
00:11:44:02 (John Sheehan)
What kind of role does hatchery salmon production play in helping the Killer Whales.
00:11:50:02 (Dr. Megan Wallen)

Hatchery production can help to boost the prey base for Southern Resident Killer Whales. So, the evidence tells us that the whales don’t discriminate between hatchery and wild fish. So, on a short term level it can help to get more fish out there and into the mouths of the whales. But extensive hatchery production can have long term impacts on the wild salmon populations. Which is why it’s important to focus on several different approaches such as ongoing habitat restoration efforts that help the salmon survive.
00:12:22:00 (John Sheehan)
Can you talk a little bit more about what ongoing efforts need to be taken?
00:12:26:01 (Dr. Megan Wallen)
So, we’re working to address those three primary threats in a variety of different ways. We are working to protect Southern Residents from vessel impacts through continued enforcement and education about the rules and guidelines for people that are operating vessels near the whales. There’s extensive efforts with habitat restoration that are important for salmon. We work with a lot of different partners; Washington State, Government of Canada, the tribes on all of these different threats. We’re also working with using drone footage to understand more about Killer Whale health and the seasonal changes in body condition. And so, the researchers can go out with drones and collect aerial images. And using a technique called photogrammetry they can actually document the size of the whale and see if it’s good or poor condition.
00:13:26:02 (John Sheehan)
So, in light of all the challenges what can we do? What can a citizen do?
00:13:33:03 (Dr. Megan Wallen)
Yeah, it’s important to be cognizant of the issues that are, that the Killer Whales are facing. You know if you’re out in the water make sure you’re aware of the guidelines and regulations for operating a vessel around Killer Whales. You know, be whale wise. When you’re out in the water give the whale space. It allows them to hunt and find the prey that they so desperately need. You know help out with your local salmon habitat restoration effort. And just generally be aware of a good environmental citizen.
00:14:06:00 (John Sheehan)
Doctor Megan Wallen, thanks so much for spending some time with us.
00:14:10:05 (Dr. Megan Wallen)

Thanks, I appreciate it.
00:14:12:00 (John Sheehan)
Doctor Megan Wallen is a marine mammal specialist in NOAA Fisheries West Coast Protected Resources Division and was the project lead on the five year review of the Southern Resident Killer Whale. The report was released in January. Special thanks to Marla Holt for providing the Killer Whale calls. On our next episode we’ll get back to our series exploring the different regions of NOAA Fisheries and how surveys are foundational to the work of science centers. I’m John Sheehan and this has been “Dive In with NOAA Fisheries.”
00:14:44:08 (AUDIO ENDS) 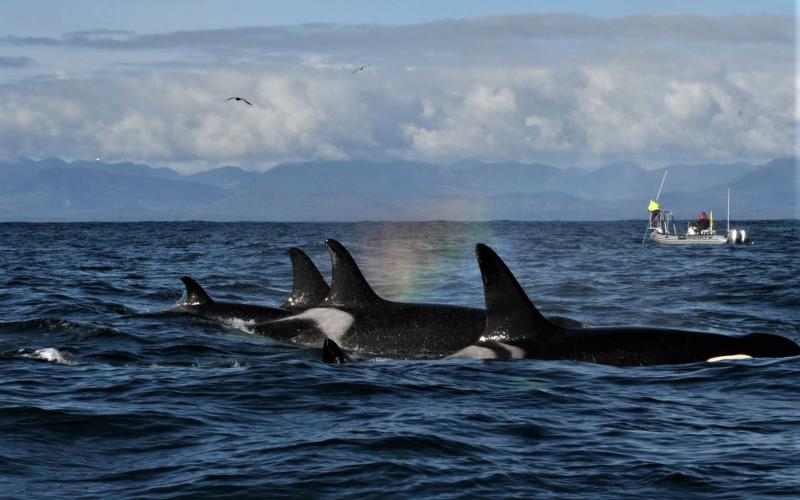 Under the Endangered Species Act, NOAA Fisheries is required to conduct a review of listed species every 5 years, including the Southern Resident killer whale. The report summarizes the best scientific information regarding the whales' biology, status, and threats.

We talk with the project lead on the report, Dr. Megan Wallen, a marine mammal specialist in NOAA Fisheries' West Coast Region Protected Resources Division. Follow along and find out more about Southern Resident killer whales, and how the population is doing.

Last updated by Office of Communications on February 15, 2022