To Protect Fin Whales, Scientists Work on Their Listening Skills

Scientists map out distinct populations of endangered fin whales based on differences in their songs.

To Protect Fin Whales, Scientists Work on their Listening Skills

Host: Fin whales are the second largest animals on earth, second only to blue whales. And like their slightly large blue whale cousins, fin whales were hunted nearly to extinction during the whaling days. They’re still listed as endangered, but their numbers are recovering.

Shannon Rankin: All fin whales are currently listed as endangered, and right now the federal government is trying to determine if they’re doing okay.

Shannon Rankin: And as part of that, we need to identify different populations, subspecies or populations of the fin whales to understand if they’re all doing okay across the board, or if there are some that are fine and others that maybe warrant a little more protection.

Host: One way to figure out population structure would be genetic analysis. You can get DNA samples from fin whales at different locations and figure out which groups are interbreeding and which groups aren’t. But fin whales are distributed all over the globe. To get DNA samples from everywhere would be hugely expensive. So Rankin and a bunch of other NOAA scientists are looking for a more practical method. Now, Rankin is not just any type of marine biologist. She’s a bioacoustician.

Host: Among fin whales, it’s the males that produce sound. It may be that by singing they’re advertising for mates who can then home in on them by following the song to its source. Or, it may be that they’re using song to mark their territory and warn other males to stay away.

But whatever they’re using it for, the song is recognizable, and here’s the key point. The notes in the song are different in different parts of the world. It’s kind of like fin whales speak a different dialect depending on where they’re from. Rankin’s hypothesis is that you can use differences in song type to map out the different populations of fin whales.

Shannon Rankin: Once you pull out the wires, the first thing you’ll do is a visual inspection to see what the wires look like. They should be shiny and silver.

Host: I visited Rankin in the acoustics lab where she was instructing a graduate student on how to assemble electronic components. The two of them were surrounded by giant spools of rubberized underwater cable and there was a workbench nearby. It had a jeweler’s magnifying lamp on it, a soldering iron and it was covered with circuit boards and those little miniature electronic things with wires sticking out of them.

Shannon Rankin: You can see through here through the epoxy that this is a preamp, and this cylinder right here is a hydrophone.

Host: I asked Rankin if she would imitate a fin whale for me and she was like, “Sure, no problem.” And then she just sat there and didn’t make a peep. It turns out fin whales sing at such a low pitch, humans can’t even hear them.

Shannon Rankin: Sometimes if you really, really crank the volume as loud as possible and you have the highest quality headphones and gear, you can feel it and the hair on your arms will stand up and it’s not sound. It’s like a vibration.

Host: And that’s why this technique for studying fin whales works so well. Low frequency sound waves travel especially well underwater. After all, that’s why fin whales use them, to advertise to other fin whales tens or even hundreds of kilometers away. As a result, fin whales songs are picked up at listening stations all over the world. Sure, Rankin goes out by boat with her hydrophones to collect high-quality fin whale recordings, but she uses those as templates so she can filter the tons of acoustic data that’s already out there, just waiting for someone to use it.

Shannon Rankin: And there are a lot of sea floor hydrophones that are already deployed for all sorts of different purposes. One of the wonderful things about fin whale calls is they’re actually detected on seismometers. And so there are a lot of equipment spread out through all the ocean basins to detect earthquakes. And as these geologists are analyzing their data, seasonally they get this tremendous amount of noise. Their noise is our gold. Fin whale calls are just like seismic. That’s what I mean when you feel it.

Host: That’s also why I haven’t played any fin whale song for you in this podcast yet. It’s beneath the range of human hearing. But, we cheated a bit. Rankin sped up the sound in her computer for me. She sped it up by a factor of eight so we could hear it. It’s not just earthquake-listening geologists that are picking up fin whale song. The Navy also has arrays of hydrophones on the sea floor listening for, I don’t even know what. It’s classified. But whatever it is, the Navy also extracts whale calls from the recordings and sends them to Rankin.

Fin whales migrate great distances. They cross entire ocean basins and as they do, they’re picked up by all these sensors. Leila Hatch, another NOAA marine biologist and also an acoustic expert describes what it’s like to watch a front of fin whales migrate across the globe. She says it’s like watching a weather system move across the face of the planet.

Leila Hatch: What did they used to call them—protracted fronts. Just like okay. But it is sort of a climactic thing. You could watch fin whales generally move from the equator north and south in ocean basins. You’d see these sort of fronts of fin whales going through and we know this from decommissioned Navy sensors where we’d watch sort of lines of fin whale calling go through an ocean basin. And they’d move up, and then they’d move down.

Host: And as they’re moving through these different groups of fin whales are all singing in their distinct dialects. Again, Dr. Hatch.

Leila Hatch: They’re making predominately one to two note types. They’re going them at regular down swept intervals and what’s changing is the spacing between—the actual interval spacing, the potential addition of a "whoop" occasionally in some areas and not in others. And a back beat "boom" occasionally in others, right? So they’re adding a note here or there. They’re changing the interval timings.

Host: Now that they’ve identified different variety of fin whale songs, the next step is to see if the groups that produce those songs correspond to distinct populations of whales.

Eric Archer: Genetics uses the tools of DNA sequencing to look at different ways to measure similarity and relatedness between individuals.

Host: That’s Eric Archer. Dr. Archer is a marine biologist and geneticist with NOAA and he’s working on a project that’s complementary to the one that’s based on song. He gets biopsy samples from fin whales from many different parts of the world and he’s doing genetic analysis on them to understand their relatedness. Rankin will then use Archer’s genetic data to test the effectiveness of her acoustic method.

Eric Archer: So we get samples from all over the world. Usually they’re very small pieces of skin. Then we go through a multi-step process of going from the skin, the tissue and sometimes it’s other pieces and parts to getting data and the data is sequenced.

Eric Archer: If you had correlation between the call types and the genetics, it would be very strong evidence that you had multiple groups that needed to be managed independently.

Host: It would also mean that the new method that Rankin and her colleagues are developing works. That is, that scientists can use song data which after all is relatively easy and inexpensive to collect, to help reveal population structure. And that would help NOAA scientists ensure that vulnerable populations of fin whales are adequately protected, even as larger groups do well on their own.

You know, it makes sense that sound is a great way to study whales and other types of marine animals. These animals use sound not only as their primary means of communicating, but also of sensing their environment. And they evolved this way because sound waves travel so well underwater. Light on the other hand hardly penetrates at all. That type of environment might seem alien to visual creatures like us. But by listening to them, we’re tuning into their world and we’re getting a much clearer picture of what’s going on in the ocean. 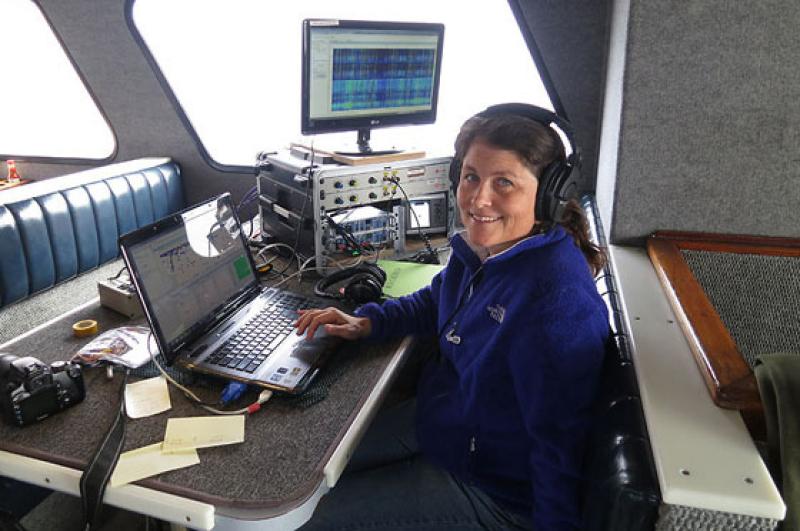 Fin whales are the second largest animals on Earth, second only to blue whales. And like their slightly larger blue whale cousins, fin whales were hunted nearly to extinction during the whaling days. They’re still listed as endangered, though their numbers are recovering.

In order to know how well they’re doing, scientists need to map out the different populations of fin whales. In other words, they need to know which groups of fin whales tend to interbreed with each other and which groups stand apart. This will allow them to determine which populations are numerous and doing well and which are small and perhaps in need of extra protection.

Scientists often use genetic data to map out populations. But fin whales are distributed throughout the world’s oceans. To get DNA samples from everywhere would be hugely expensive. But perhaps there’s an easier solution.

Fin whales sing, and like humans, the sounds they make are different in different parts of the world. So NOAA biologists are identifying different groups based on their song type, and then testing some of them genetically to see if those groups comprise reproductively distinct populations. If they do, then scientists will be better able to protect fin whales just by listening to them.

Last updated by Office of Communications on July 22, 2021