For Rescued Sea Turtle Eggs, A Chance at Survival

NOAA Fisheries veterinarian, Brian Stacy, describes a very unusual attempt to rescue the eggs of a sea turtle that was hit and killed by a boat.

For Rescued Sea Turtle Eggs, a Slim Chance of Survival

Rich Press: On April 5th, a female leatherback sea turtle was struck by a boat off the coast of Florida. A boater who later saw the injured animal called the stranding hotline, and law enforcement officers and a veterinarian were dispatched to the scene. Unfortunately, they were unable to save the sea turtle. They were able to save something, though—the turtle's eggs, which were later planted in an artificial nest. We don't know yet if this story will have a happy ending. We're still waiting to see if any of the eggs will hatch. But in the meantime, here to tell the story is Brian Stacy, a veterinarian and sea turtle expert with NOAA Fisheries.

Brian Stacy: It was April 5th. I got a call in the evening that Florida Fish and Wildlife Conservation Commission law enforcement responded to a distressed leatherback turtle.

Rich Press: Many species of sea turtle, if seriously injured, would be brought to a rehabilitation center, but leatherbacks don't do well in captivity. So for the veterinarian from the Loggerhead Marine Life Center who was among the responders in this case, the best thing would be to patch the animal up, give her antibiotics, and send her on her way. Unfortunately, in this case the animal's injuries were too severe.

Brian Stacy: She expired, you know, at the scene before anything could be done for her. Given the size of the turtle and the description, I was concerned that she was a nesting female and, you know, maybe gravid. There could be an opportunity to recover her eggs and get them back to the nesting beach.

Rich Press: In fact, this was a very unusual opportunity. In most cases, the sea turtle would already be dead when it's found, its eggs no longer viable. And even in a case like this, the eggs are very sensitive, and their development can easily be disrupted. Stacy said he knows of only a single case where sea turtle eggs rescued in this way went on to hatch.

Brian Stacy: The odds of are poor of it working out, but we're gonna do the best we can, and give 'em every chance.

Rich Press: After the turtle died, they brought it in for a necropsy. That's what you call an autopsy on an animal. Doing that wasn't easy because this was a big turtle. Leatherbacks are the largest turtle species in existence, and this one weighed about 400 kilograms, almost 900 pounds.

Brian Stacy: This was a large animal, and it was off on a sandbar, so it really did require heroic effort from the rehabbers and the Florida law enforcement. But they got it in, and a volunteer drove it up. And the following morning, we were able to examine her and confirm that she had been struck at least twice by watercraft, and that was the cause of her demise.

Rich Press: Unfortunately, watercraft are a significant cause of mortality among sea turtles, especially during the warmer months when so many boaters take to the water.

Brian Stacy: They're right there in neutral waters where there's a lot of vessel traffic, and we know that adults tend to spend a lot of time near the surface relative to immature or non-reproductively active animals. So that kind of puts them within the strike zone for watercraft.

Rich Press: Whether the cause of death is a vessel strike or something else, necropsies are a critical source of information that scientists need to manage endangered species and develop conservation plans.

Brian Stacy: We like to have the best available information on causes of mortality and threats to protect the species. As unfortunate as it is when we have a dead endangered animal to examine, it's an opportunity to collect samples for critical biological research that we otherwise wouldn't have access to, for things like dietary studies, exposure to different environmental contaminants.

Brian Stacy: She had well over a hundred eggs in her, so she was already about to lay her first large clutch for the season and would have nested multiple times.

Rich Press: Among sea turtles, large adult females are particularly important to the population because they produce so many eggs, so the death of this one was a particular loss. Stacy removed and cleaned the last eggs she would produce, packed them in a cooler filled with vermiculite to keep them stable and moist, and then called Allen Foley, a wildlife biologist at the Florida Fish and Wildlife Conservation Commission.

Allen Foley: Brian called me to let me know that it was a gravid female and they had recovered eggs, and he wanted to know what I thought we should do with them.

Rich Press: Cases like this are extremely rare, so it's not like these guys are doing this every day. Still, despite the lack of regular practice, Foley knew exactly what to do.

Allen Foley: Then it's just a matter of taking it out to the beach. This is a beach like all others in Florida, really, where sea turtles naturally nest, including leatherbacks. And so we just picked a spot that would be typical of turtle nesting on that beach, and dug a hole that simulated the same type of hole a female would dig, and then put the eggs in. And then they marked the nest, and they'll check it in 80 days or so to see if there's any sign of hatching.

Brian Stacy: Well, we hope some proportion of the hatchlings will emerge. They'll go into the ocean. Unfortunately, the way it is with turtles, they're gonna face very slim odds in reaching adulthood, but we'll hope for the best. If they survive and are to return, they'll come back to that same general area potentially to nest.

Rich Press: The eggs are still sitting quietly in their nest. They may have stopped developing back when their mother was killed. On the other hand, it's possible they were saved in time. We'll know later this month. But in the meantime, if you're boating, please be aware of any sea turtles or marine mammals that may be nearby.

Brian Stacy: Always be on the lookout for marine animals. Take evasive action as possible. Take the vessel out of gear if you see an animal that's within the path of the vessel. Often things happen very quickly, but in some instances it can be helpful.

Rich Press: To find out if these sea turtle eggs hatch, check out the Web page for this podcast. You'll find that at www.fisheries.noaa.gov/podcasts. Everyone mentioned in this podcast, including the law enforcement officers and the veterinarian who were the first responders on the scene, they're all part of the stranding network. If you see a stranded sea turtle or marine mammal, please call the stranding hotline in your area. You'll find the numbers for those hotlines also on the Web page for this podcast. 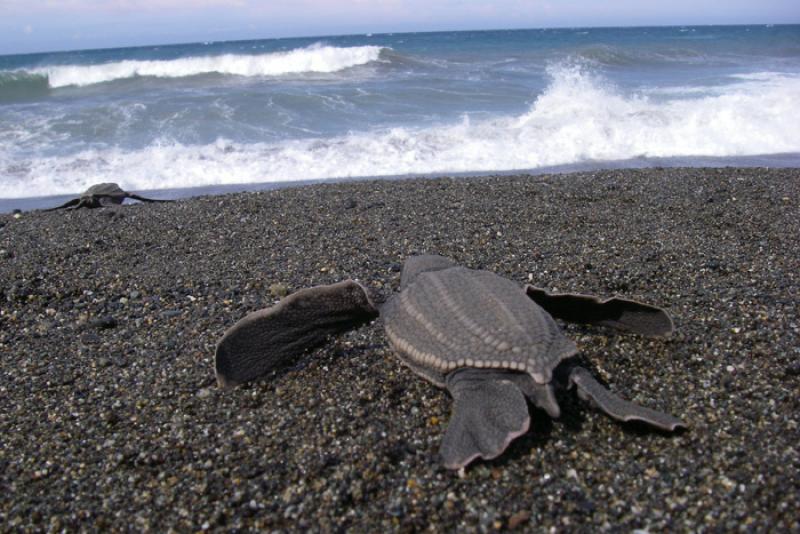 A boat hit a female leatherback sea turtle off the coast of Florida recently, and a boater who later saw the injured animal called the stranding hotline. Law enforcement officers and a veterinarian were dispatched to the scene. Unfortunately, they were unable to save the turtle. They were able to save something though: the sea turtle's eggs, which they planted in an artificial nest.

We don't know yet if this story will have a happy ending—we're still waiting to see if any of the eggs will hatch. But in the meantime, here to tell the story is Brian Stacy, a veterinarian and sea turtle expert with NOAA Fisheries.

UPDATE: Allen Foley, one of the biologists interviewed for this podcast, reports that the artificial nest showed no sign of hatching after 80 days. The usual incubation period for leatherback sea turtles is 55 days. Scientists dug up the nest and examined the eggs. The eggs showed no signs of development, indicating either that they were never fertilized or died very early in development.