NOAA Fisheries wildlife biologist Sharon Melin describes conditions at the sea lion rookeries on the Channel Islands, where pups are going hungry because unusually warm water along the Pacific coast has made it more difficult for their mothers to find food. 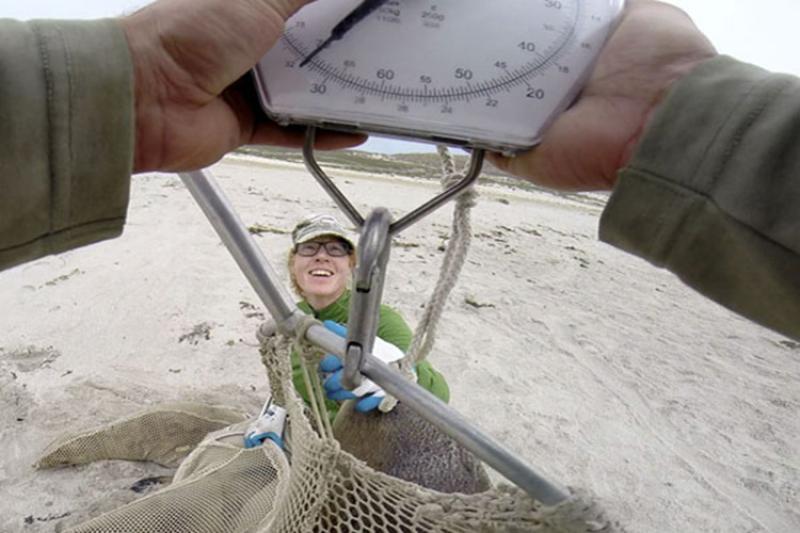 For a few months now, sea lion pups have been stranding on the coast of Southern California. So many have washed up, emaciated and exhausted, that marine mammal care centers can scarcely hold them all. But while most people first notice the pups on the beach, their desperate plight began on the Channel Islands, which are about 25 miles offshore of Santa Barbara. Those islands are home to the sea lion rookeries where the pups are born and where they spend the first year of life.

Many pups at the rookeries are going hungry, according to Sharon Melin, a wildlife biologist with the NOAA Fisheries National Marine Mammal Laboratory who recently returned from 3 weeks of fieldwork on the Channel Islands.

In this podcast, Melin explains that unusually warm water along the Pacific coast has sent sardines, anchovies, and other prey species north or deeper in search of cooler water. As a result, sea lion mothers are having trouble finding enough food to nurse their pups.

Many of the pups eventually set off on their own desperate search for food. But the pups, weak and lacking the experience they need to forage on their own, wash up on the mainland instead.

What Should You Do If You Encounter a Sick California Sea Lion on the Beach?

--Do not touch the sea lion.

--Observe the animal from a safe distance (safe for you and the animal).

--Sick or dead marine mammals should be reported to the following agencies in California: