New research reveals that Atlantic white sharks, which were hunted indiscriminately for almost two decades following the release of the movie Jaws, have slowly been making a comeback.

Rich Press: It’s Shark Week!...and so today we have an unusual story for you about sharks. Unusual because everywhere these days, you hear about shark populations in decline. Well, here's a story about sharks making a comeback. According to a recently published study, the population of great white sharks off the U.S. Atlantic Coast is growing. Maybe you’ve already heard about this. It’s been in the news a lot this summer. Well, today we have two NOAA biologists on the line, including the lead author of that study, to talk with us about what drove the precipitous decline in white sharks a few decades ago, and what exactly is behind their recovery. The lead author, Tobey Curtis, is a shark scientist with NOAA’s Greater Atlantic Regional Fisheries Office.

Tobey Curtis: ...which showed, first of all, a decline in the population during the 1970s and 1980s. Then, we saw a previously undocumented recovery of the white shark population since the 1990s. We had no idea that was happening until now.

Rich Press: This study looked at white sharks off the Atlantic and Gulf Coasts of the United States with the goal of estimating how the population has changed over time. To do that, Curtis and his colleagues compiled all the records they could find of white shark sightings, landings by fishermen, and instances where white sharks were unintentionally caught in fishing gear, like gillnets and longlines that were meant to target other species.

Tobey Curtis: We started collecting the records in like the 1960s, and we’ve got records going back to the year 1800. So basically it’s a synthesis of archived data. We just kind of put it all together, and did the best we could to analyze it for distribution and abundance.

Rich Press: Given the retrospective nature of the study, and the fact that it relied on reported sightings, there's a fair bit of uncertainty in the results. Scientists were not able to say how many white sharks were out there historically, or even how many are out there today. But they were able to discern distinct up and down trends in the relative size of the population. And those ups and downs were pretty dramatic. The decline started in the 1970s, and according to Jose Castro, a biologist and shark expert with NOAA’s Southeast Fisheries Science Center, it was precipitated by at least two historical events. The first one happened in 1972 when Nixon went to China.

Jose Castro: After the diplomatic overtures, the merchants pipeline from one place to the other got set up, and the fishery for sharks developed. There was an abundance of sharks in this area. There was a demand for shark fins at the other end. So it was natural that the Chinese merchants would want their American counterparts to provide them with fins for the fin trade.

Rich Press: It took a number of years for commercial relations to develop, but when they did, the trade in shark fins really took off. And, since shark fishing was unregulated at the time, a great number of sharks were killed to make shark fin soup. In the meantime, in 1975, another big historical event happened.

Jose Castro: The movie Jaws is probably one of the most influential movies in history. And, at first, it set up a shark-killing frenzy. You know, people looked at sharks as malevolent creatures feeding on mankind. And, so it set off an ecological catastrophe of people killing every shark they could. You know there were shark fishing tournaments that had categories...you could get a prize for the most sharks killed. And that lasted for about 20 years.

Tobey Curtis: So all sharks were fair game, no rules at all for shark fisheries until 1993. And, so it was a couple decades, easily, of just unregulated over fishing.

Rich Press: Open season on sharks ended when shark fisheries were regulated for the first time in 1993. Then in 1997, white sharks became a prohibited species, along with whale sharks, basking sharks, dusky sharks, and a dozen or so other species. Any of them caught, whether inadvertently by commercial fishermen, or intentionally by sport fishermen, would have to be released.

Tobey Curtis: The signs of recovery are coincident with the fisheries regulations, so we think that the conservation measures have really benefited the white sharks and helped them rebuild.

Jose Castro: The effect of the movie Jaws reversed themselves. You know, at first, it was kill every shark, and now it’s, now we’ve gotta protect these predators, which was very interesting and very commendable. It was actually surprising that the aegis of protection that was extended to say marine mammals, or some of it was extended to sharks. Not in the same degree, but we started to protect them, and eventually we had some protected species that you could not harvest. That was an incredible change. Only 15 or 20 years before, we were allowed to kill every one that we could. So it was an incredible change of direction.

Rich Press: White sharks also benefited from protections for other species. Grey seals had been hunted until they were nearly wiped out from U.S. waters long before. But thanks to the Marine Mammal Protection Act, they’ve been making a comeback.

Tobey Curtis: The seal population off New England has recovered dramatically in the last 10 years or so, and that’s probably helped give the white sharks a little extra boost with reliable high quality prey source. So during the summertime, the grey seals have become very abundant off Cape Cod in particular, and it’s become the new sort of white shark hot spot for the Atlantic.

Rich Press: The recent study showed, and I should point out that there’s a lot of uncertainty around these numbers, that by the 90s, after two decades of unregulated over fishing, the white shark population had fallen to about 30 percent of what it was only a few decades before. Since the 90s, they’ve made up some lost ground and are back up to about 70 percent of their historical level. That is definitely good news. But still, the recovery is going slowly. Females don’t start reproducing until they’re about 15-feet long.

Tobey Curtis: And it takes them a long time to grow that size, and they only have a few young at a time, maybe a dozen pups, and that’s probably every two to three years. We call it "life in the slow lane". When the population has depleted, it can take a long time for them to naturally recover.

Jose Castro: These animals have very vast ranges. There's more and more hooks being set up every year out there in the open ocean. And they are long-lived animals, so it’s very difficult for an animal that maybe lives 50 or 60 years to go for a whole lifetime without encountering a longline or a gillnet.

Tobey Curtis: The news has been using terms like "surging" and "booming" and "exploding" shark populations, and it’s certainly not anything like that. It’s been a gradual recovery over a 20-year period. It's positive signs that the population is growing, but we’re not there yet.

Jose Castro: When we look where we have gone in the past, say, 30 or 40 years with the conservation of sharks, the trend is very positive. But so much remains to be done.

Rich Press: I think I’ll end this podcast on that cautiously optimistic note. If you think I’ve ended it too soon and you still want to know more, send Tobey Curtis your questions. He’ll be hosting a live tweet chat on Thursday, August 14th from 6-7pm Eastern time. Tweet your questions to @NOAA Fisheries with the hashtag #SharkChat, and he’ll do his best to answer your questions.

As always, you can get more information about this story on our website. That’s www.fisheries.noaa.gov/podcasts. There you’ll find a link to the paper on white sharks in the journal of PLOS ONE, and also a link to an award-winning paper by Jose Castro, one of the two scientists you just heard from. In addition to being a scientist, Castro can also be described as a historian. His paper, which is full of amazing artwork, recounts how our knowledge of sharks has evolved over the last few thousand years.

Thanks for listening. Join us again next time for more stories about ocean life and ocean science. I’m Rich Press and you’re listening On the Line. 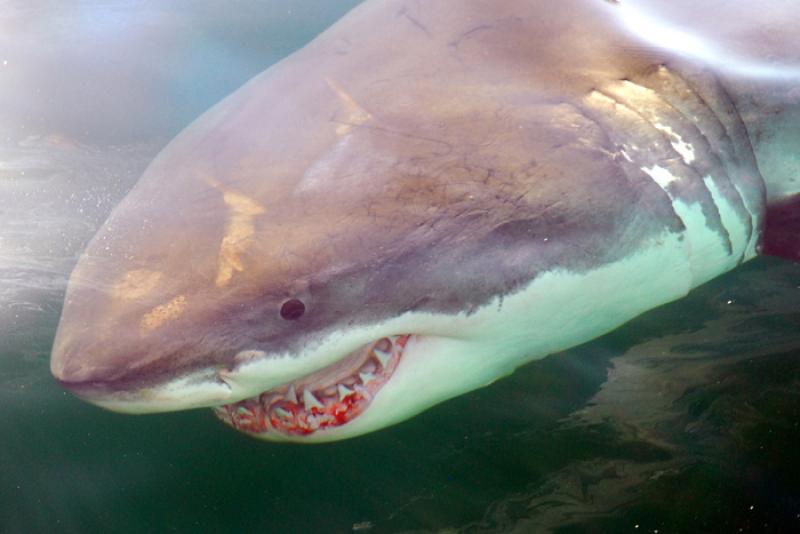 According to a recently published study, the population of great white sharks off the U.S. Atlantic coast is growing. Maybe you've already heard about this—it's been in the news a lot this summer.

Today we have two NOAA biologists on the line, including the lead author of that study, to talk with us about what drove the precipitous decline in white sharks a few decades ago, and what exactly is behind their recovery.

The lead author of that study, Tobey Curtis, is a shark scientist with NOAA's Greater Atlantic Regional Fisheries Office.

Read the article on the historic trends in abundance of white sharks that appeared in the scientific journal, PLOS ONE.

Learn about the Apex Predators Program.

Read more about the study of white shark abundance in the Northwest Atlantic from NOAA's Northeast Fisheries Science Center.

Learn more about our historical knowledge of sharks from Aristotle to the present day.

Last updated by Office of Communications on March 24, 2022