A compilation of data collected since 2002 during low tide surveys from hundreds of intertidal sites throughout the coastal waters of Alaska. 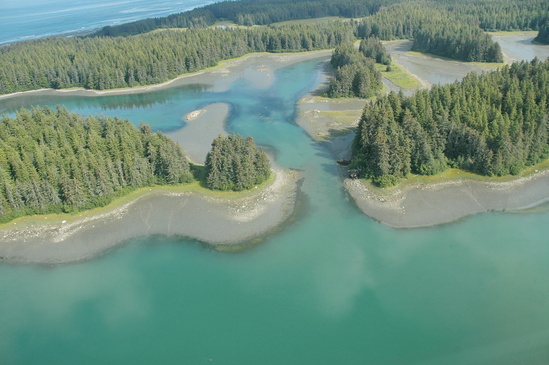 Southeast Alaska at low tide during a ShoreZone survey.

The Alaska Shore Station Database is a compilation of data collected since 2002 during low tide surveys from hundreds of intertidal sites throughout the coastal waters of Alaska. Shore station survey data include observed species and their assemblages, geomorphic features such as sediment substrates and forms, beach length, slope and specific elevation profiles, and station photo documentation.

The Alaska Shore Station provides detail to the attributes described in the Alaska ShoreZone coastal habitat mapping website.  The Alaska ShoreZone and Shore Station data are not meant to be compared, as the two products utilize different scales and levels of detection. The shore station data provide more insight into the regional differences among habitats by adding descriptive detail to the definitions of shoreline habitats that were classified from the aerial surveys.

Due to the expense of accessing many of Alaska’s remote coastal areas, shore station data were often collected opportunistically and, thus, the sites were not selected in a statistically random manner. However, every attempt was made to choose sites that encompassed the range of observed coastal habitats and wave exposures.

Funding for developing this tool to supplement the Alaska ShoreZone project was provided by the Cook Inlet Regional Citizens Advisory Council.