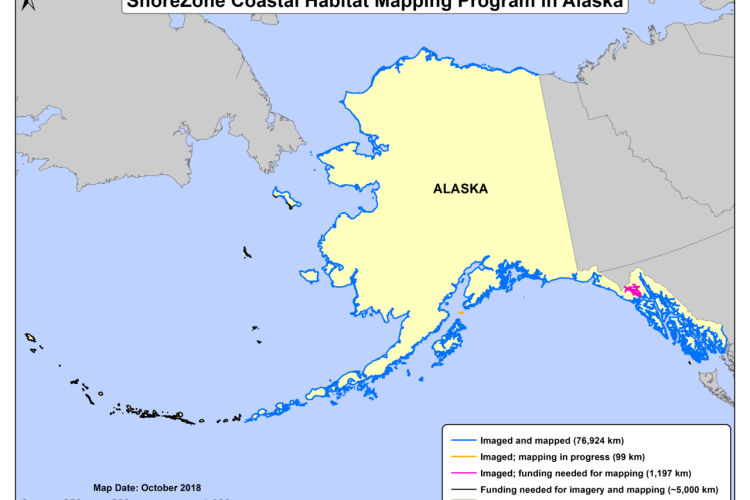 The ShoreZone mapping system has been in use since the early 1980s and has been applied to more than 120,000 km of shoreline in Alaska, Oregon, Washington and British Columbia. As of 2018, approximately 94% of the state has ShoreZone imagery and of the area imaged approximately 98% is mapped. This project has been funded by NOAA and a number of other agencies and organizations throughout the years.

This standardized system catalogs both geomorphic and biological resources at mapping scales of better than 1:10,000. The high resolution, attribute-rich dataset is a useful tool for extrapolation of site data over broad spatial ranges for creating a variety of habitat models and oil spill response tools.

Tutorials - How To Use ShoreZone

The Alaska ShoreZone program goal is to collect aerial imagery and habitat map all of Alaska's coastline and to make the imagery and the data both "physically and intellectually" accessible to everyone. Since 2003, more than 40 partners have contributed to the Alaska ShoreZone Program and annual meetings of all the partners are held to review the progress of the project, establish priorities and future goals, and identify potential funding sources.

Learn how to create a simple query on the ShoreZone Alaska Flex Site using oil spill response as an example.

Learn how to use the ShoreZone Flex Site to determine potential habitat for butter clams and herring spawns harvest.

The Alaskan Arctic can be a verdant and colorful landscape supporting a vast array of plants, animals, and even people. These remote and almost…