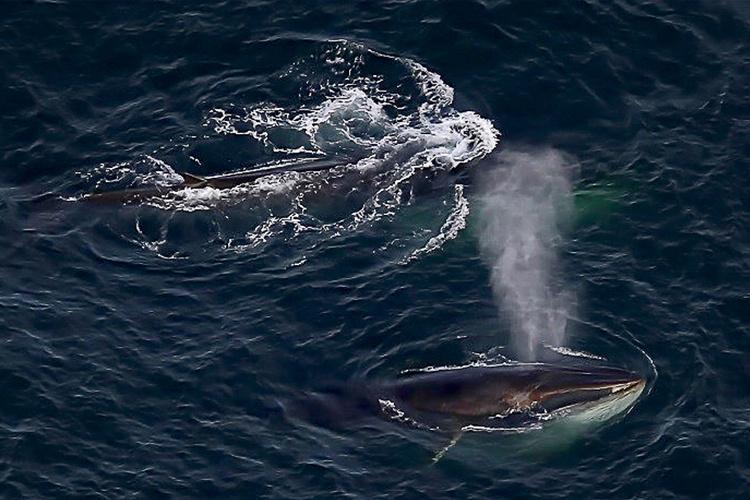 A Day of Stone

When we are in the field trying to fly aerial surveys in the Arctic those are the days we sit around monitoring the fickle weather patterns, hoping for an opening in our vast survey area with cloud ceilings of 1100 feet (our minimum requirement) and decent sea states (less than a Beaufort 5 please - that means not too many white caps!).

In the Arctic, weather isn’t predictable and often doesn’t follow the forecast. So, a “Day of Stone” can mean we start our day off with an optimistic outlook for a survey. The forecast tells us that the ceilings at our home base (Utqiagvik and Deadhorse for us) will lift and stabilize enough for safe launching and return of the survey airplane. Often times, we sit here waiting and watching as the fog rolls in and out of town, effectively grounding us for the day. This has been happening more than we would like.

A Day of Cubic Zirconia

We also have days when we launch a survey and are able to cover our entire survey area, but just have very few whale sightings. This August this happened quite a bit. Even though we get a big “COMPLETE” mark for covering those survey transect lines, the sightings of animals were few and far between at times. That is what I call a ‘cubic zirconia’, a very nice solid survey day that just lacks sparkle. A zirconia day that covered lots of transect miles over the course of 2 flights without even one sighting of a cetacean! These surveys are hard work, without much excitement, and too many of these types of survey days back to back are a bit hard on team morale. 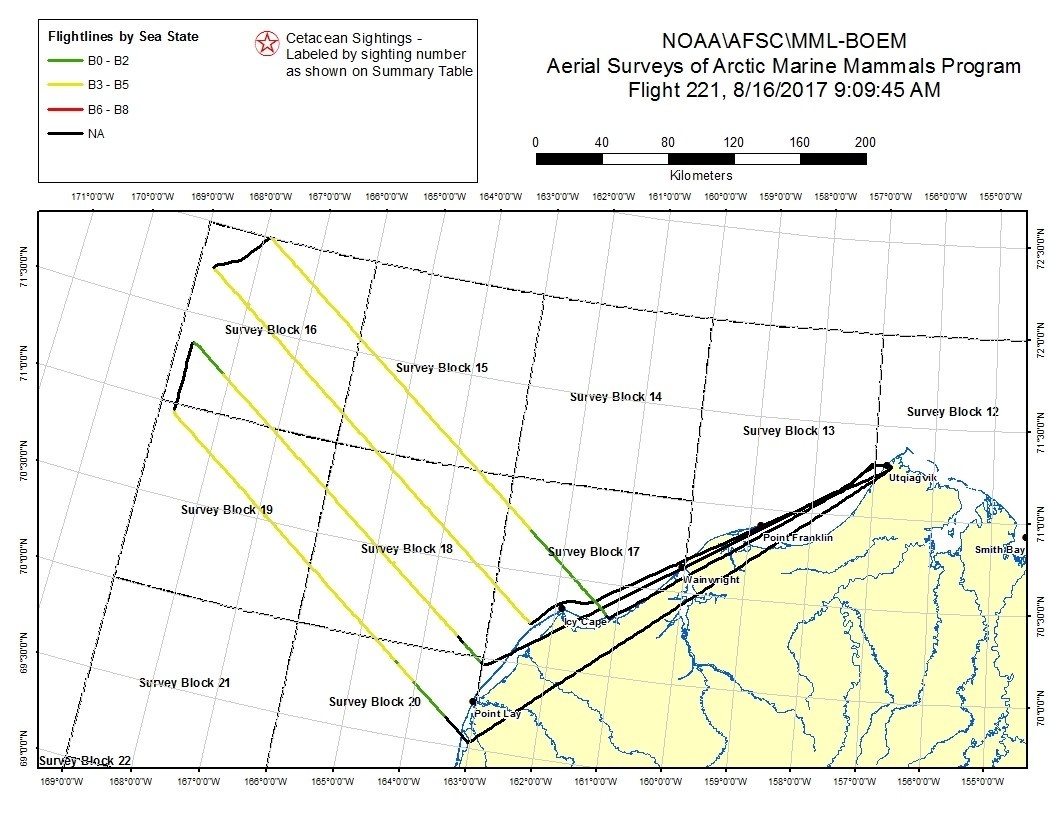 A “Day of Diamonds” is a combination of fully completed transect lines with the extra sparkle of interesting sightings!! See the difference in sighting markers in the map below compared to the zirconia flight map above. Those little red stars mark cetacean sightings - now that has sparkle!

On the 27th of August, we had a chance to survey the area immediately east of Utqiagvik and found 56 bowhead whales, most of whom were feeding at the surface. That was definitely a diamond of a day! 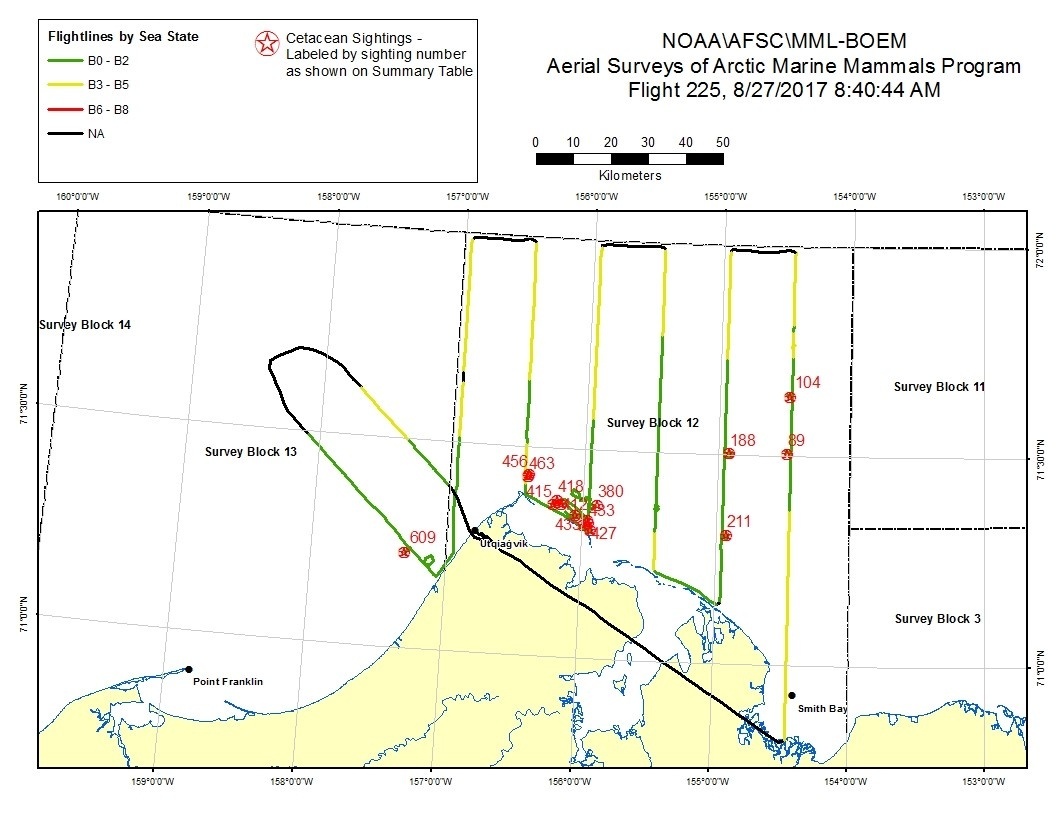 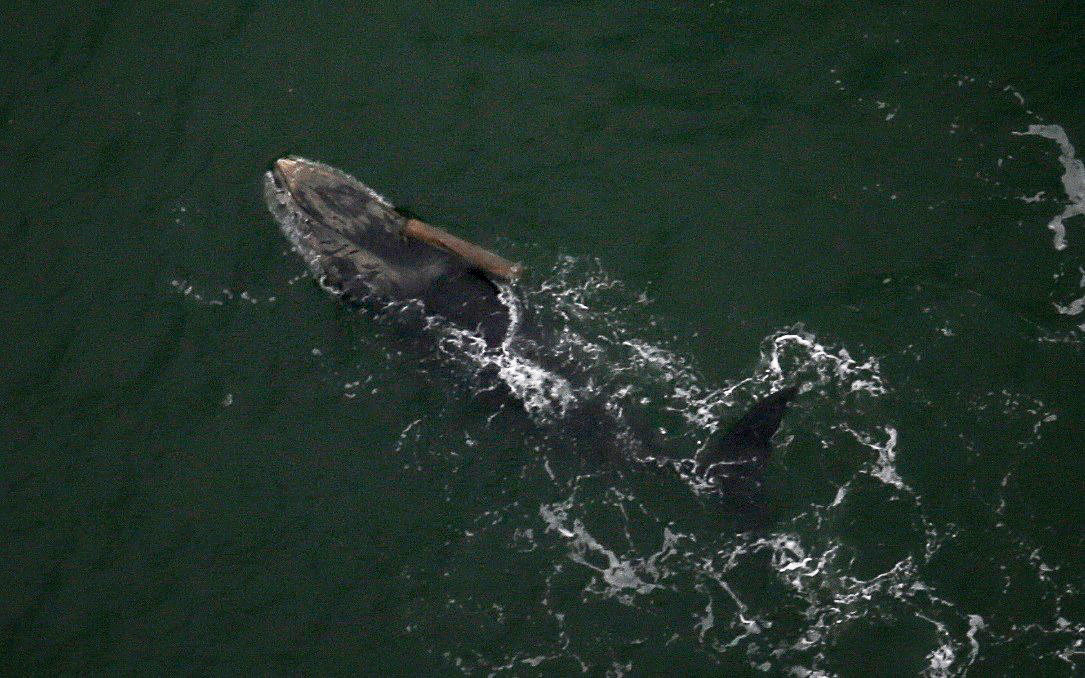 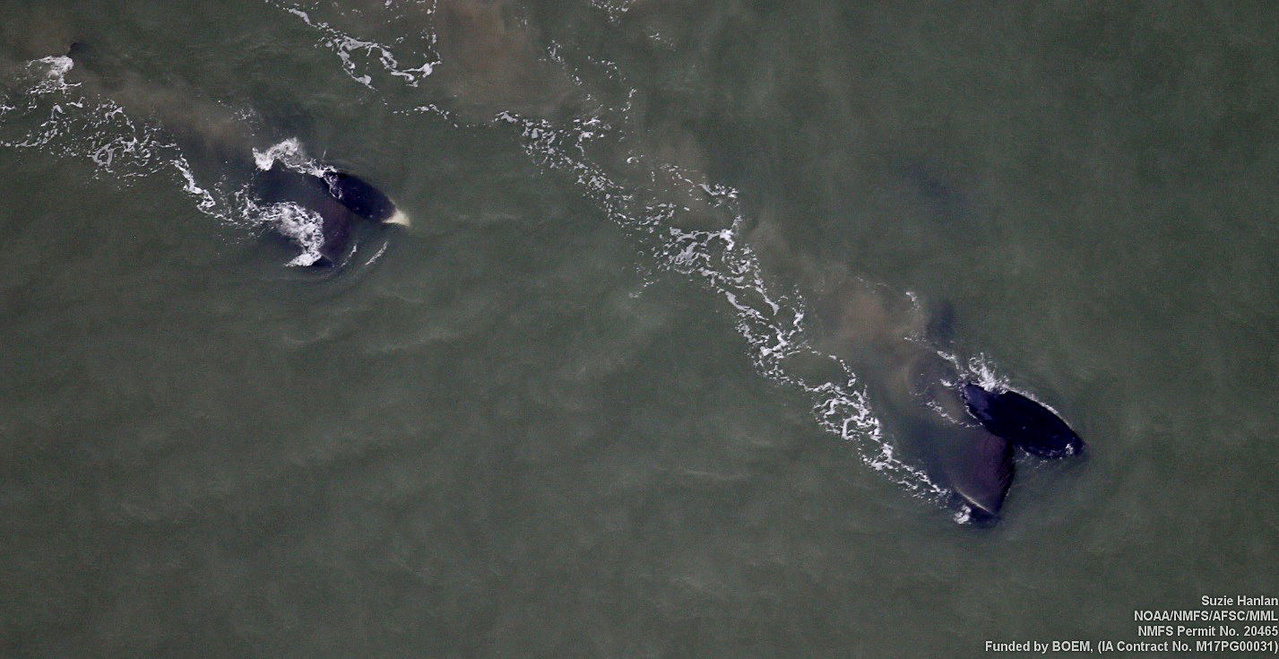 Bowhead whales feeding at the surface. The whales are on their sides with their mouths open.

On the 28th of August, we had another “Day of Diamonds” with two flights in the southwestern portion of our survey area. Look at all of those red stars clustered together!

So, as we wrap up August on the North Slope of Alaska, we head into the last half of surveys for ASAMM. I’ll be humming a little John Denver in the back of my mind as we sit watching the weather on those “Days of Stone,” knowing that just around the corner will likely be some “Days of Diamonds.” 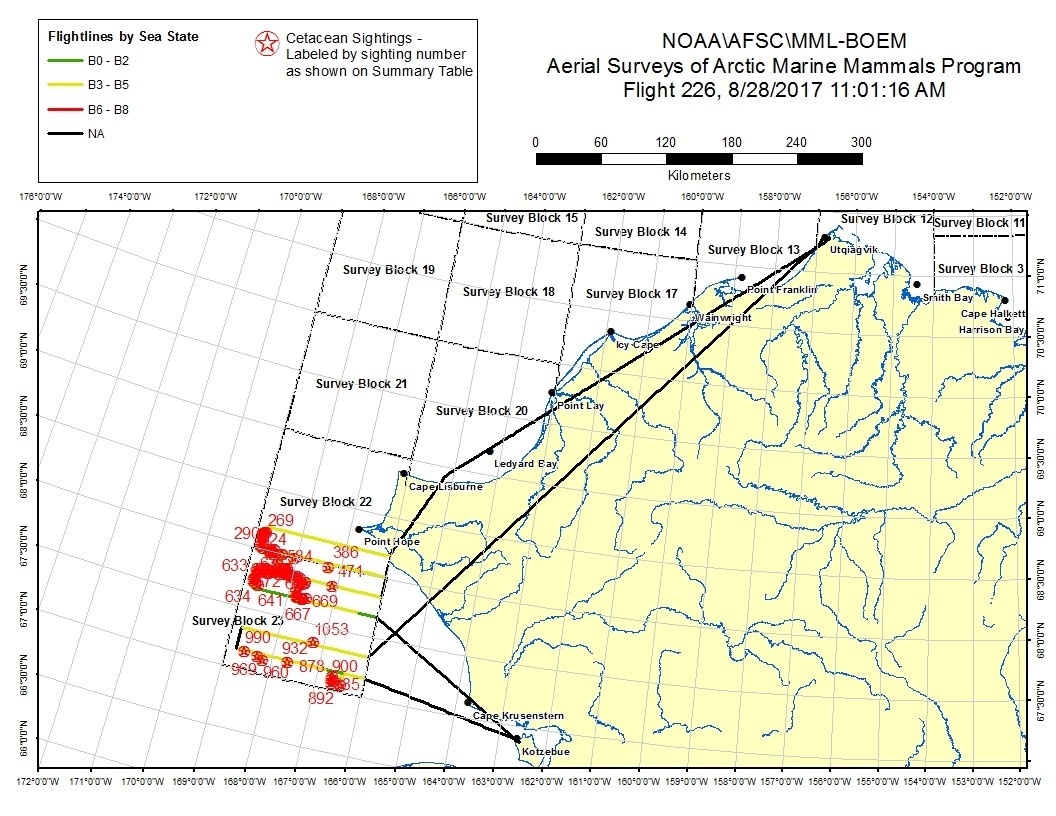 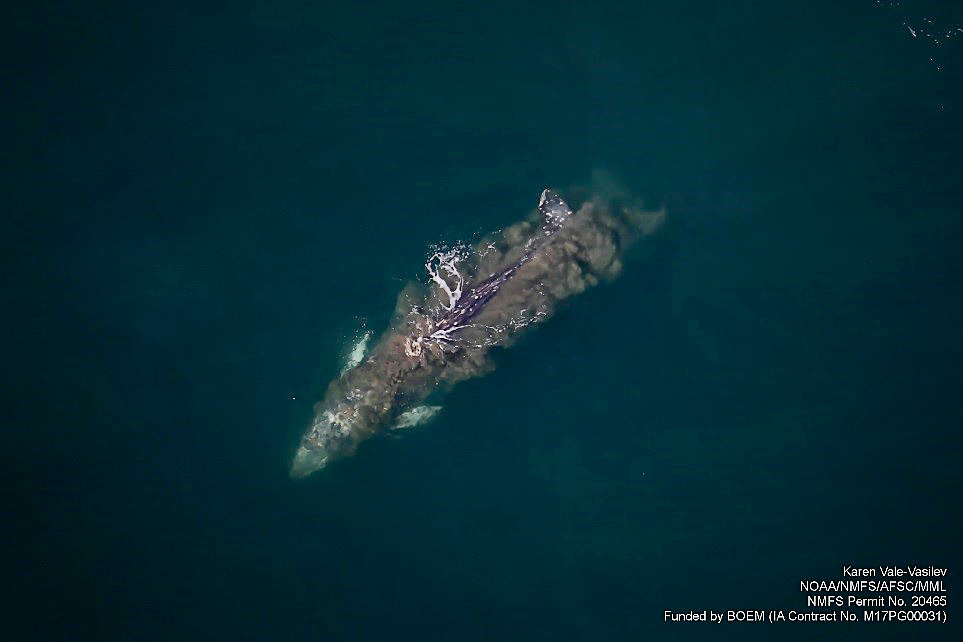 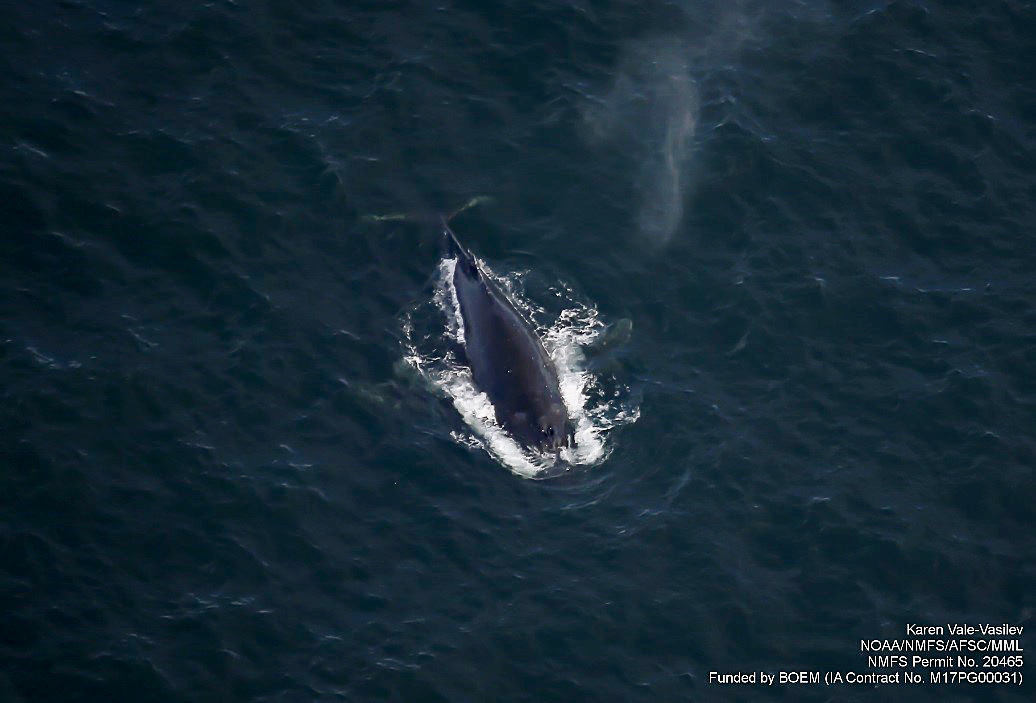 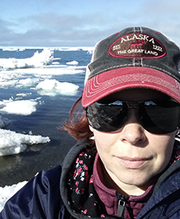 Christy started as a photo-identification volunteer at the Alaska Fisheries Science Center in 1998, and has been working with the Cook Inlet beluga whale project since completing her Masters of Marine Affairs at the UW in 2001.

Christy has worked as observer and videographer on the Cook Inlet beluga aerial surveys since 2003 as well as working on photo-id projects on humpback and bowhead whales. She has also participated in Aerial Survey of Alaska Marine Mammals (ASAMM) as a team leader since 2012.

When she isn't flying around in Alaska in a small plane, Christy is in Seattle analyzing data or designing and managing databases.