The kids are alright – Bowhead whale calves in the Alaskan Arctic. 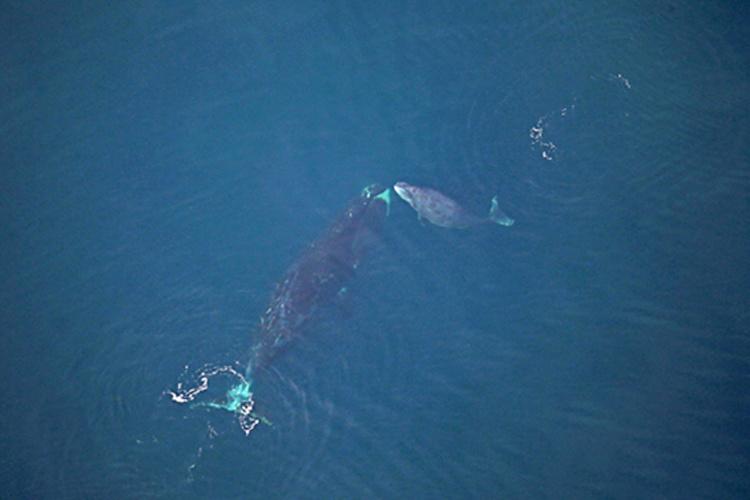 There are some who might think that baby bowhead whales, known as calves, do not qualify as “cute” or “adorable”. Rubbish! Although they may not appear as cuddly as polar bear or walrus babies, bowhead whale calves still pass the “awwwww” test. The universal appeal of baby animals is not the only reason the Aerial Surveys of Arctic Marine Mammals (ASAMM) project expends extra effort to document the presence or absence of bowhead whale calves. Calf data is also used to assist with the general health assessment of a population by determining calving interval (e.g., how often do adult females have calves), measuring calf growth rate over time (e.g., how fast do calves grow), estimating an annual ratio of calves to adults, and calculating calf sighting rates. Some of these assessments require specialized photography methods that ASAMM is not able to incorporate into survey protocol, but many of the assessments directly benefit from data collected by ASAMM.

Most bowhead whale calves are born during the spring migration from wintering areas in the Bering Sea to summering grounds in the Beaufort Sea, usually between the beginning of April and end of May. Calves may be born as early as March and as late as August. Calves-of-the-year that are seen by ASAMM in July and August in the western Beaufort Sea are therefore probably about 3-6 months old. Bowhead whale calves are generally (but not always) light gray and uniformly mottled, with a narrow head in relation to the width of the body, and a stout or rotund body in relation to overall length. Most calves-of-the-year are observed in close association with an adult, who is presumably the mother (or cow). ASAMM also regularly records very small whales, assumed to be calves-of-the-year, alone at the surface, presumably hanging out there while mom feeds subsurface. As calves get older, they spend less time closely associated with their mothers, their skin darkens from light gray to darker gray, and their heads appear proportionately larger and bodies slimmer. Several of these features can be seen in the images in Figures 1 and 2. 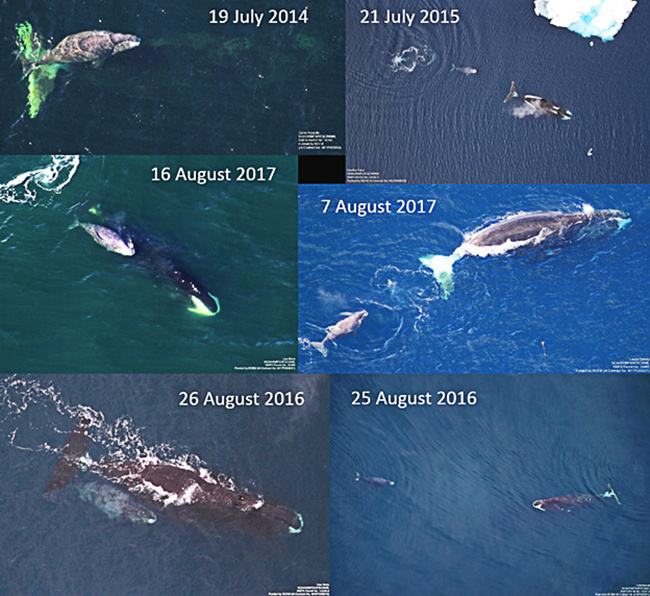 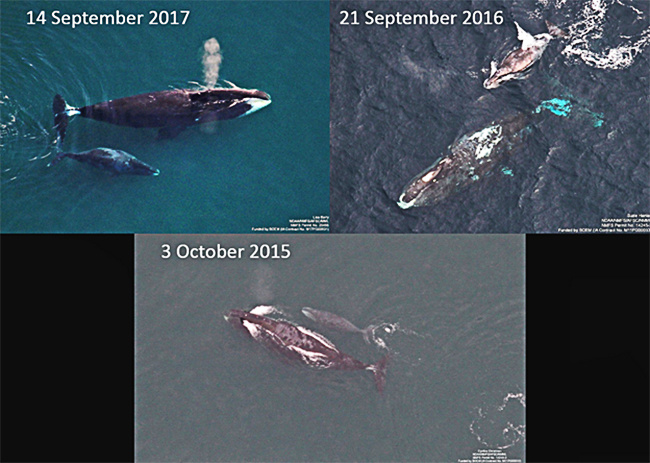 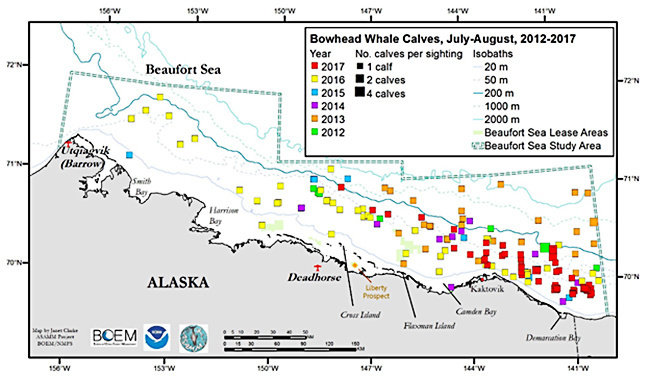 In some years, in fact, the calf ratio (number of calves observed divided by the total number of whales observed) was actually higher in summer (July-August) than fall (September-October). Bowhead whale cow-calf pair occurrence during summer months in the western Beaufort Sea may be indicative of a change in bowhead whale habitat use in this area or may be due to the increased survey effort in this area since 2012. Summer 2017, in particular, has been more extraordinary than previous summers for bowhead whale calves - both calf ratio and calf sighting rate (number of calves sighted per km surveyed) were higher in summer 2017 than in the previous five years (Figure 4). 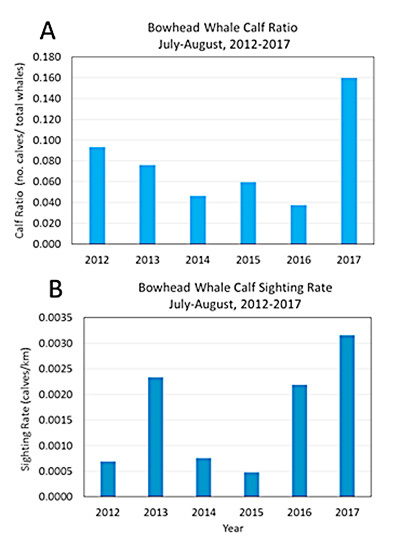 While it is possible that some of the calves sighted in summer 2017 were sighted more than once, the high calf ratio and sighting rate strongly suggest that calf production was high. And calf sightings have continued into September, with 89 bowhead whale calves observed so far, representing the highest number of calves in September since this project began! High calf production is one positive indicator of the overall health of the Western Arctic stock of bowhead whales. Bowhead whale body condition is another indicator, and that increased from 1989-2011 (George et al., 2015) in correlation with summer sea ice loss in the western Beaufort Sea. The loss of summer sea ice may be increasing bowhead whale food production, known as secondary productivity. 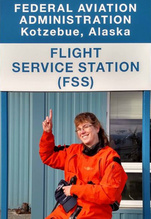 Janet Clarke is a contractor with Leidos who supports the Aerial Surveys of Arctic Marine Mammals (ASAMM) project through a contract with NOAA Fisheries Alaska Fisheries Science Center.

Janet began studying Arctic marine mammals in 1982, and her first project as a young naïve college graduate was as a biologist on these same aerial surveys. She logged about 1,500 aerial survey hours from 1982-1991, most of which were flown in Grumman Goose aircraft and often over large expanses of sea ice. From 1991-2007, Janet supported several Navy exercises as a marine mammal (and occasionally sea turtle) Subject Matter Expert, both in the field and as a co-preparer of environmental impact statements and environmental assessments. The Arctic remained her geographic area of interest, however, and she was delighted to return to the area in 2007 as the Project Lead for ASAMM.

As Project Lead, Janet’s responsibilities extend to field project management, data analyses, report and manuscript writing, formal and information presentations, producing garishly colored maps, being the keeper of ASAMM “corporate” knowledge, and (best of all) occasionally being a team leader on ASAMM surveys.