Back to Sea on the Spring BTS

It's spring and the Northeast Fisheries Science Center is back at sea conducting the bottom trawl survey. Some interesting catches add to the ever-changing weather! 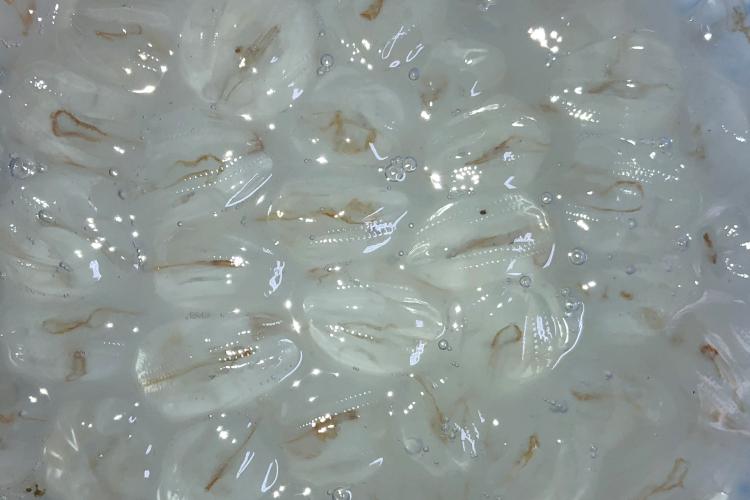 What are these? Tiny comb jellies, a type of gelatinous animal that uses its cilia or “combs” to swim.

We’re back in the swing of things on leg 2 of the Northeast Fisheries Science Center's Bottom Trawl Survey!  Sailing is a bit different this year with the COVID protocols. Everyone wears their masks on the ship, and there is a limit to the number of people who can be in a room at a time. Despite this, we have all easily adapted to these new practices and have been very productive overall.

We started sampling just south of Long Island Sound and made our way offshore. Then we had to take shelter due to the weather, which on land was an unusual April storm that brought snow to Boston. We came back out to start sampling south of Martha’s Vineyard, and the sky was transitioning from being very cloudy to beautifully blue. The cloudy sky was reflected in the water, making for a nice photo!

No matter how many times I come out to sea, there is always something new, like this common octopus, Octopus vulgaris. It is the largest octopus I’ve personally seen out here. They use their arms, which are covered with suckers, to not only grab onto surfaces and food but also to sense and navigate their environment. We measure the mantle—the part that is just behind the eyes and contains most of an octopus’s organs—to get the length for an octopus, but that proved difficult here! This one kept wrapping itself around the measuring board, and it was a bit tricky to get a length. With all its suckers and no skeleton, it took two people to handle this slippery and strong animal.

A very common animal that may not look like an animal at all is the ctenophore, also known as a comb jelly. Some assume these tiny, gelatinous animals are related to jellyfish, but they are actually in their own phylum. Comb jellies get their name from the cilia—tiny, vibrating hairlike structures—that run along their bodies that help them move through the water. The rows of cilia in the picture at top remind me of the stitching found on a football.

The current weather has brought beautiful sunsets. When visiting the flying bridge to admire the orange sky, I noticed a small pile of bones, specifically vertebrae, on the deck. I’ve been on the flying bridge several times since we’ve sailed and haven’t seen them before, so it’s curious when they showed up. Perhaps I simply overlooked them? Mixed in the pile were some otoliths, or fish ear bones. Assuming the otoliths belong to those vertebrae, based on their shape and what we’ve been catching, that fish was either a spotted hake or a red hake. That’s the neat thing about otoliths! It doesn’t just give information about the age of a fish, it’s also a useful structure when it comes to fish identification.

Previous: Five Stories That Blew My Mind in 2020 Next: Stinky Stomachs Smell Like Home

Last updated by Northeast Fisheries Science Center on May 28, 2021