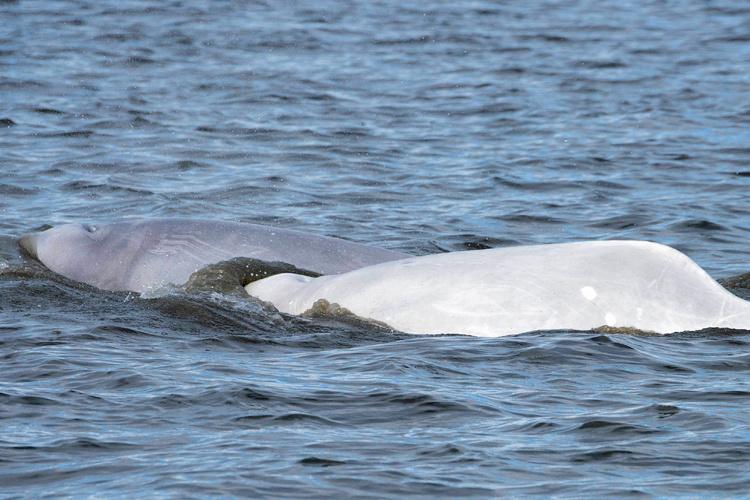 Our first day out during Leg 2 was nothing special – we found lots of beluga whales along the Susitna Delta as usual, but the wind was just a little too strong to fly the hexacopter, and then it started to rain fairly hard, so we headed in early.

The flight team had upgraded their equipment for Leg 2 by bringing a colorful beach towel to hide under, rather than borrowing one of the hotel towels (sorry!). The beach towel must have brought us more luck, as a little over 3 hours later we had exhausted all of our batteries, making 12 flights. Jake and Hollis shot 3,307 hexacopter photos; I bested them numerically by shooting 3,462 photographs from the boat. Conditions were great, and Hollis and Jake did really well, with a quick preliminary count showing that they had collected at least 231 photos with shots of belugas suitable for photogrammetry measurements. That was some impressive flying!However, the next day made us forget that quickly, as the weather kept improving to the point where the waters of Cook Inlet were glassy calm under beautiful blue skies. We took advantage of the good weather to get all the way out west to Beluga River, about as far west as we will go, 30 nautical miles from Anchorage. There were no belugas by Beluga River, but we did find them along the edge of the delta at the Big Susitna River, and were able to start flying the hexacopter right away.

A quick look through the photos in the evening revealed some interesting whales. First was an adult whale that had a severely curved back behind it’s dorsal ridge, suggesting it may have a spinal deformity, though it was swimming perfectly normally. (insert photo 5 next to this text) Second, we got some good hexacopter photographs of one of the whales that was tagged over 15 years ago with a satellite transmitter to track it’s daily movements. Third, we saw an interesting sequence of behaviors from a group of whales that we were able to photograph both from the hexacopter and the boat – two white whales swam on either side of a light gray beluga for several minutes, and the light gray whale rolled onto it’s side and back the entire time. At first we wondered if the gray whale was sick or injured, but soon realized it was fine when it swam away strongly at the end of the sequence. We are not exactly sure what was going on, but it struck me this was similar to the behavior of other species of whale, where a female will roll onto it’s back to make it more difficult for males that are attempting to mate with her.

NOAA scientists are using an uncrewed aerial system, a hexacopter, to collect photographs of the endangered Cook Inlet beluga whale. They want to estimate the length of individual whales and learn more about why it has been slow to recover despite many efforts to help it.