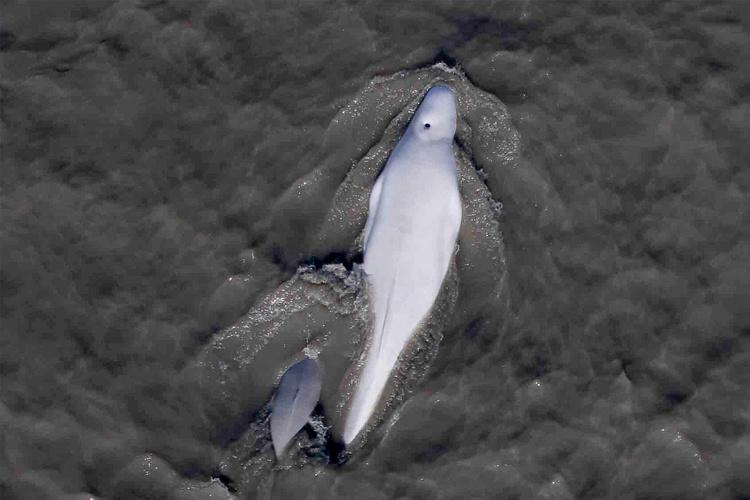 After a couple of rainy days that kept us in our hotel rooms catching up on data management and email, the beautiful weather returned yesterday and we were able to get out for a great day on the water. We covered 85 miles, our most yet.

It’s easier to see how fast the water is moving at one of the navigation buoys – the tidal current emptying upper Cook Inlet is about 5 knots here. More views of Denali (20,310 ft) and Mt. Foraker (17,400 ft) in the background - Photos: Paul Wade, NOAA Fisheries

We were joined by Mandy Migura, Cook Inlet Beluga Whale Recovery Coordinator for NOAA Fisheries Alaska Regional office in Anchorage. The regional office is where regulations and policies are finalized for managing fisheries and conserving marine mammals.

Early in the morning we had the clearest skies, and again had views to Denali. We took advantage of the flat waters to make the 30 mile run to the west to the mouth of the Beluga River. We had the first good views of two active volcanos on the west side of Cook Inlet that are higher than 10,000 feet, Mt. Spurr and Mt. Redoubt. We are into some of the biggest and fastest changing tides we have seen -- we launched after a high of 30.7 feet, and all the water is pouring out of the upper Inlet because it has to get to a low tide of -2.6 feet at 3:19pm.

We found our first group of belugas just east of the Beluga River, about 75 whales spread out over a mile, working east along the edge of the mud flats. Jake and Hollis were able to start flying, though the whales were more difficult to photograph than the more bunched groups we had been seeing earlier in the month.

An adult and young juvenile beluga whale near the Beluga River. - Photos: Hollis Europe/Jacob Barbaro, NOAA Fisheries
After 4 flights, and with the wind picking up slightly, we decided to leave that group and head east. We were hoping to pick up another group closer to the east end of the Susitna Delta. Sure enough, we found a smaller group of about 35 whales. They were just west of the Little Su River mouth, spread out over a mile. We were able to make 2 more flights there until the winds got a little too high.

With no other options, we made the long run past Anchorage and up Knik Arm, where it is often less windy because it is more protected. Sure enough, we found about 45 whales in Eagle Bay, the first time for us.

Tamara and Chris Garner (Biologist with Joint Base Elmendorf–Richardson, which abuts Eagle Bay) had told us that this time of year the big bunched-up groups on the Susitna Delta start to break up as the whales start the following salmon runs up Turnagain Arm and Knik Arm. We witnessed this ourselves.

Justin at the helm of JR, the ADF&G Safeboat we are using. - Photos: Paul Wade, NOAA Fisheries

Jake, Justin, Mandy, and Hollis on the ride out to Beluga River. - Photos: Paul Wade, NOAA Fisheries
We arrived in Eagle Bay at the height of the flood tide, and we measured a spectacular 7 knots of current in our drifting boat! With the mud flats of upper Knik Arm about to be re-flooded, the whales were letting the current carry them up the Arm away from us.


Justin did some great boat handling in all that current to keep us off the mud flats, and keep the boat oriented correctly for launching the hexacopter. Jake and Hollis were able to get in 2 more quick flights before the whale disappeared around the corner.

Turning back to Anchorage was like boating up a raging river. We fought all the water flooding back into Knik Arm. Justin had the boat up on step planing, and it felt like we were going 15 knots or more through the water, but we were only making 5 knots speed-over-ground! You wouldn’t want your motor to quit on you at a time like that. JR’s twin outboards (our ADF&G research boat) did fine, and we arrived back in Anchorage at about 6pm, perfect timing for there to be enough water at the ramp to pull out.

So in just one day, we covered the majority of summer habitat for Cook Inlet belugas, found groups of whales in 3 different locations, made 8 flights, collected over 2,000 hexacopter photos, and may even have witnessed a seasonal shift in habitat used by the whales following salmon runs and other prey movements.

NOAA scientists are using an unmanned aerial system, a hexacopter, to collect photographs of the endangered Cook Inlet beluga whale. They want to estimate the length of individual whales and learn more about why it has been slow to recover despite many efforts to help it.