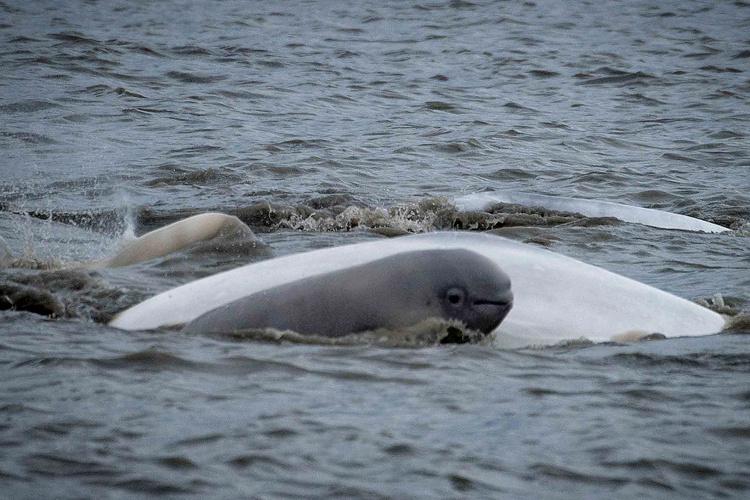 Well, we learned today that the beluga whales don’t do a good job reading the FAA rulebook about where you can fly a hexacopter. Understandably, we are restricted from flying within 5 miles of major airports. We have two of them here in Anchorage, the commercial airport west of downtown, and Joint Base Elmendorf-Richardson, north of downtown. Eagle Bay in Knik Arm, an area we know the belugas spend time in, is just north of the No-Fly Zone for us, so we thought we would be ok. But things turned out differently.

Most of Knik Arm is mud/sand flats that go dry at low tides. Even though the whales like to feed in Knik Arm this time of year, chasing salmon runs (we think), they get pushed out of the upper reaches of the Arm at low tide. There is a deeper water channel in Eagle Bay that does not go dry. Tamara and Chris told us that the whales swim through there on a falling tide as they leave the upper Arm. They often stage there, too, on a rising tide, as they wait to go further up. We must have arrived too late in the ebb tide, as we met the whales coming towards us already south of Eagle Bay, solidly in the No-Fly Zone.

We kept going to see if there were any whales further north where we could fly, but there were none. We headed back, and found the whales where we had left them. They were just hanging out south of Eagle Bay, waiting for the tide to start coming in and push them up Knik Arm as the tidal flats re-flooded. We spent a couple of hours waiting with them. We drifted through them a few times with the engine off to take identification photos, but it was very frustrating to watch. If the whales could have just moved a half mile north, we could have gotten the hexacopter up to photograph them. Conditions were great, with no wind, and a break from the rain that had come off and on all day, but we could not take advantage of it.

As expected, once the tide turned and Knik Arm started to flood again, the whales gathered up, and looked like they were ready to head north. Then, as if someone had dropped the starter’s flag at a car race, off the whales went, racing north. We were ready for them, and Jake and Hollis launched the hexacopter as soon as we were up in Eagle Bay where we can fly.

The tidal current was racing now, and we were drifting along a something like 5-6 knots. It looked good to salvage the day. And, as if on cue, it started raining. Of course. Jake was able to fly over a few whales at the end of the flight, but once he returned the bird to swap out batteries, the winds picked up, the rain kept coming, and the hexacopter was grounded.

We followed the whales north for more identification photos, but they led us right into an area at the north end of Eagle Bay where current, mud/sand bars, and a rising tide conspired to suddenly lump up into 4 foot standing waves. We scrambled to put cameras and other gear away before we took a big wave over the bow. Nothing really dangerous, just a dramatic way to end a somewhat frustrating day.

To be sure, we had spent another great day on the water in close proximity to some really interesting whales. We saw some great behaviors, so it is hard to complain. On the other hand, we didn’t end up with much data for our efforts, and we got pretty soggy.

We had a little fun at the boat ramp getting the boat out. The trailer rollers were acting up, but Justin whipped out the zip ties for some on the spot repairs that got us out of there. More rain predicted for tomorrow, but it might be tapering off around noon – fingers crossed, as it’s our last possible day on the water for this year’s hexacopter project.

NOAA scientists are using an uncrewed aerial system, a hexacopter, to collect photographs of the endangered Cook Inlet beluga whale. They want to estimate the length of individual whales and learn more about why it has been slow to recover despite many efforts to help it.