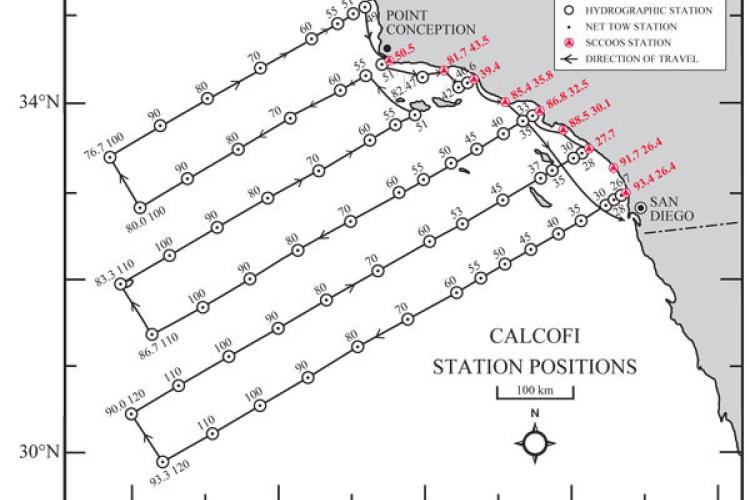 Researchers will conduct continuous underway sampling of surface waters; temperature, salinity, chlorophyll, and various other meteorological data will be logged for future assessment. Researchers will record profiles throughout the duration of the cruise with an Acoustic Doppler Current Profiler. The survey will also measure optical profiles within the California bight, including pigment concentration and particle absorption.

The 2017 fall California Cooperative Oceanic Fisheries Investigations survey departed from the Nimitz Marine Facility on November 9 at 08:00 aboard the UNOLS vessel Sally Ride. The scientific staff aboard the Sally Ride consisted of personnel from the Scripps Institution of Oceanography, National Marine Fisheries Service, and University of California San Diego. Over the course of the 16-day survey, 74 of the 75 plotted stations were successfully completed with a single station not occupied due to operations being conducted by the Navy in the vicinity of the station. At each station measurements of water temperature, salinity, dissolved oxygen concentration, pH, nutrients, chlorophyll-a concentration, HPLC, and ichthyoplankton samples were conducted.

Preliminary analysis of these parameters have been performed and plotted for the survey area and are posted. Initial observations of conditions within the California Current indicated that offshore conditions are still warmer than the seasonal average which tends to indicate that we have not yet returned to conditions seen before the recent warming trends, however, the inshore water temperatures appear to be closer to the seasonal average.

In the offshore water, samples of small pyrosomes and tuna crabs were still being found. During the occupation of line 80, the ship was once again re-routed by the Air Force at Vandenberg due to the launching operations of the recent NOAA GOES-16 satellite. Once operations were completed the ship was able to occupy all stations on line 80. All California Cooperative Oceanic Fisheries Investigations operations were completed at 22:30 on November 23 and the ship arrived back at MARFAC at approximately 14:00 on November 24.

The fall California Cooperative Oceanic Fisheries Investigations survey begins its second week conducting oceanographic and biological measurements of the California Current Ecosystem. Southwest Fisheries Science Center Fisheries Division scientists joined the SIO California Cooperative Oceanic Fisheries Investigations group aboard the R/V Sally Ride. The ship departed November 9, 2017, from the Nimitz Marine Facility and is expected to return on November 24. Ocean temperatures (offshore and coastal) continue to be warmer than seasonal averages and these trends are exemplified by the continued presence of tuna crabs (Pleuroncodes planipes) and pyrosomes (Pyrosoma atlanticum), although in reduced numbers from recent surveys.