From Graduate Studies in Beaufort, North Carolina, to Measuring Seas in Hawaii with the Beaufort Scale

Two 3rd-year PhD students each participated on a leg of HICEAS 2017 as visiting scientists. 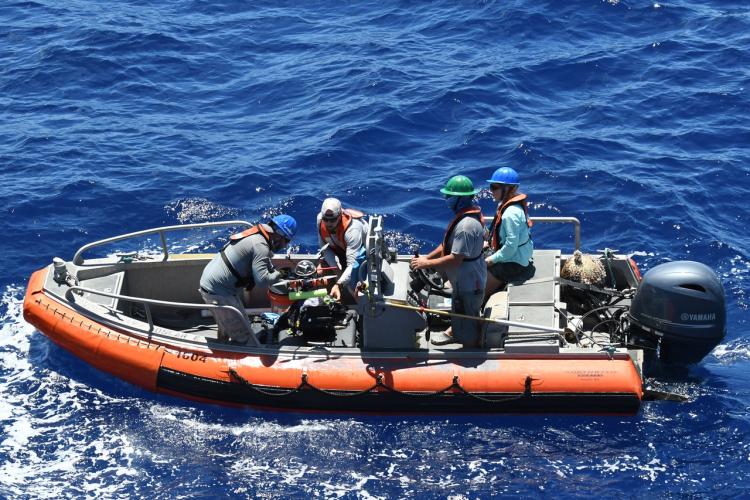 Joe and Seth are 3rd-year PhD students at Duke University Marine Lab in Beaufort, North Carolina, and each participated on a leg of HICEAS 2017 as visiting scientists.

Entering the third year of a PhD is an exciting and anxious time. The first two years focus on exploring our fields of research and developing a foundation for a dissertation, which requires reading countless papers, taking (too) many classes, and generally just thinking a whole lot about what we want to do with our lives/careers. In the third year, it is finally time to wrangle data, conduct analyses, and eventually spend every waking moment writing a dissertation! Needless to say, we were thrilled to escape the office to join the Hawaiian Islands Cetacean and Ecosystem Assessment Survey (HICEAS): Joe on the NOAA Ship Oscar Elton Sette’s 2nd leg from August 8 to September 5, and Seth on the NOAA Ship Reuben Lasker’s 1st leg from August 17 to September 5.

It wasn’t just the welcome respite from coursework and paper reading that drew us to participate in the Pacific Islands and Southwest Fisheries Science Centers’ cetacean population and ecosystem assessment survey. It was also an incredible opportunity to meet and interact with NOAA scientists, learn techniques for studying marine mammal populations in the wild, and better understand the unique challenges to studying cryptic, migratory, and sometimes seemingly invisible marine mammals. In addition, we each had our own reasons this experience would enrich and complement our particular dissertations. 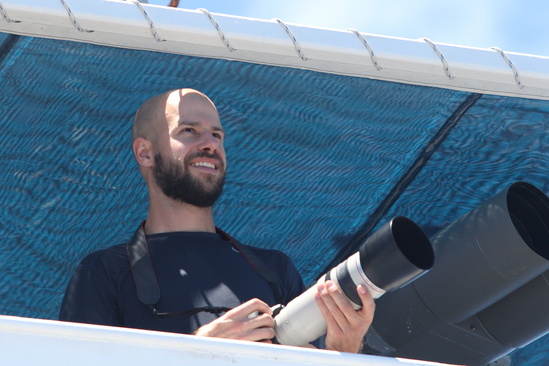 My dissertation focuses on depredation, an interaction between odontocete cetaceans (toothed whales, including dolphins) and commercial fisheries in which some odontocete species remove fish from commercial fishing lines before the fishermen are able to bring the catch aboard. It’s pretty clever and an easy meal for the whale. Unfortunately, the animals can get themselves hooked or entangled and of course cause problems for the fishermen that pull up empty lines. False killer whales are the main depredators in the Hawaii-based longline fishery for tuna and are a focus of my PhD studies. They are also a top-priority species for the HICEAS expedition, making it a perfect opportunity to see these animals in nature and develop a richer understanding of their behavior as it might relate to fisheries management. It was also a great opportunity to understand the science that goes on behind the assessment of a human-impacted cetacean population.

Our leg was 29 days all told–not a short period of time and surely one with ample opportunity for many enriching sightings of my coveted false killer whales. Indeed, it was a fantastically exciting leg. Our transect lines were mostly north of the Northwestern Hawaiian Islands through some areas that are not expected to have very high densities of cetaceans, or even good conditions for sighting in the first place. Yet, we had amazing encounters with a variety of species. Many of these species were new to me, such as the sperm whale and two incredible sightings of the rare Longman’s beaked whale. We also had quite a few interactions with my other focal species, the short-finned pilot whale. All incredible and memorable, but where were my false killer whales?? 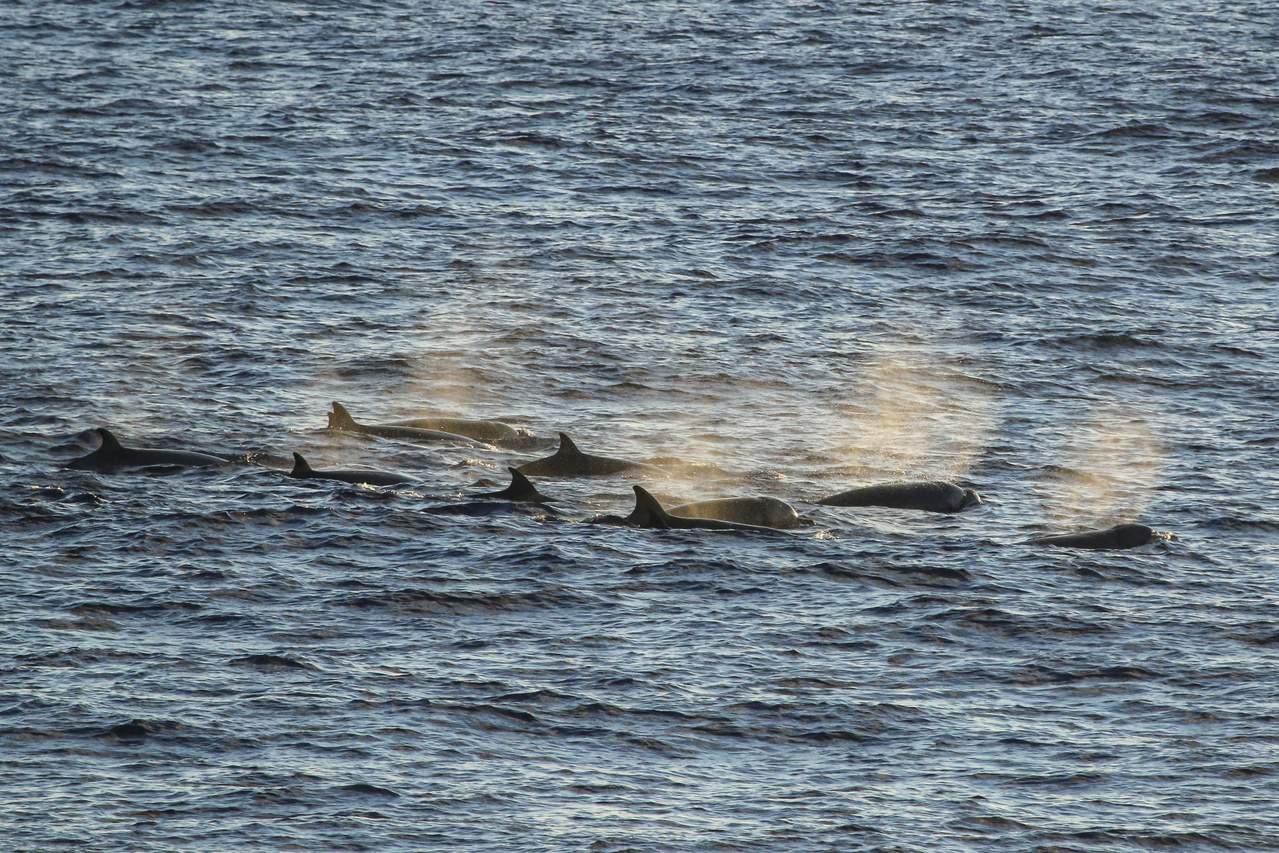 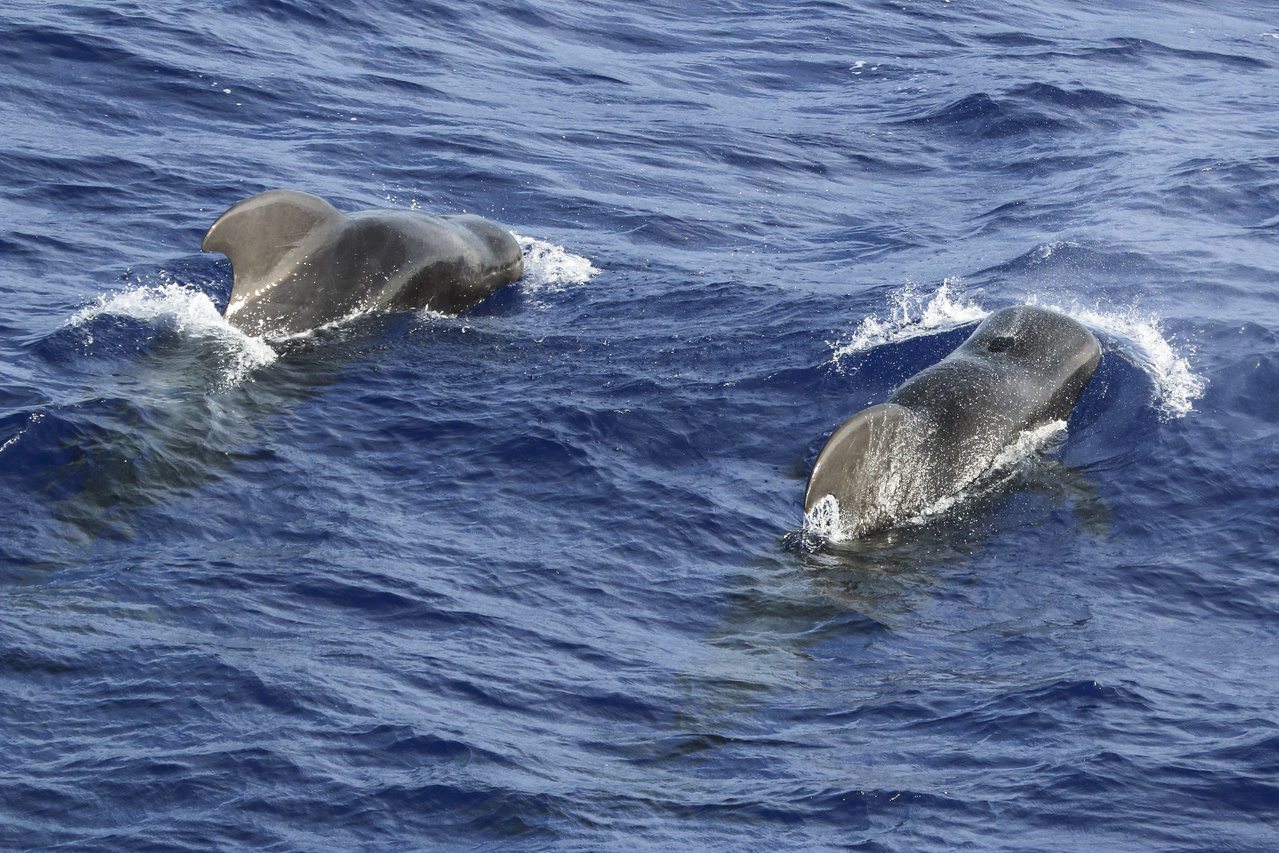 As the days ticked by, I started to worry. The other scientists and I had talked about seeing false killer whales so many times on the flying bridge of the Sette that we probably jinxed ourselves. Perhaps the more you hope to see a cetacean species, the more Poseidon will conspire against you to hide them? I grudgingly resigned to my fate, reminding myself these were wild animals, and there are no guarantees in the field. Indeed, that’s part of the excitement of studying these cryptic creatures.

We spent the last day on one final transect line southwest of the island of Oahu. The next morning would be an early arrival to port in Honolulu. With only a few hours of daylight left, I was reflective of this amazing experience, sure that nothing major would happen on this last quiet afternoon. I certainly didn’t expect that, with literally hours of observation left to spare, Cruise Leader Amanda Bradford would calmly bring me over to the acoustics station to inform me that we were entering “Phase 2” of the false killer whale protocol, in which we visually search for false killer whales that were acoustically detected. It was really happening, we had finally had them! 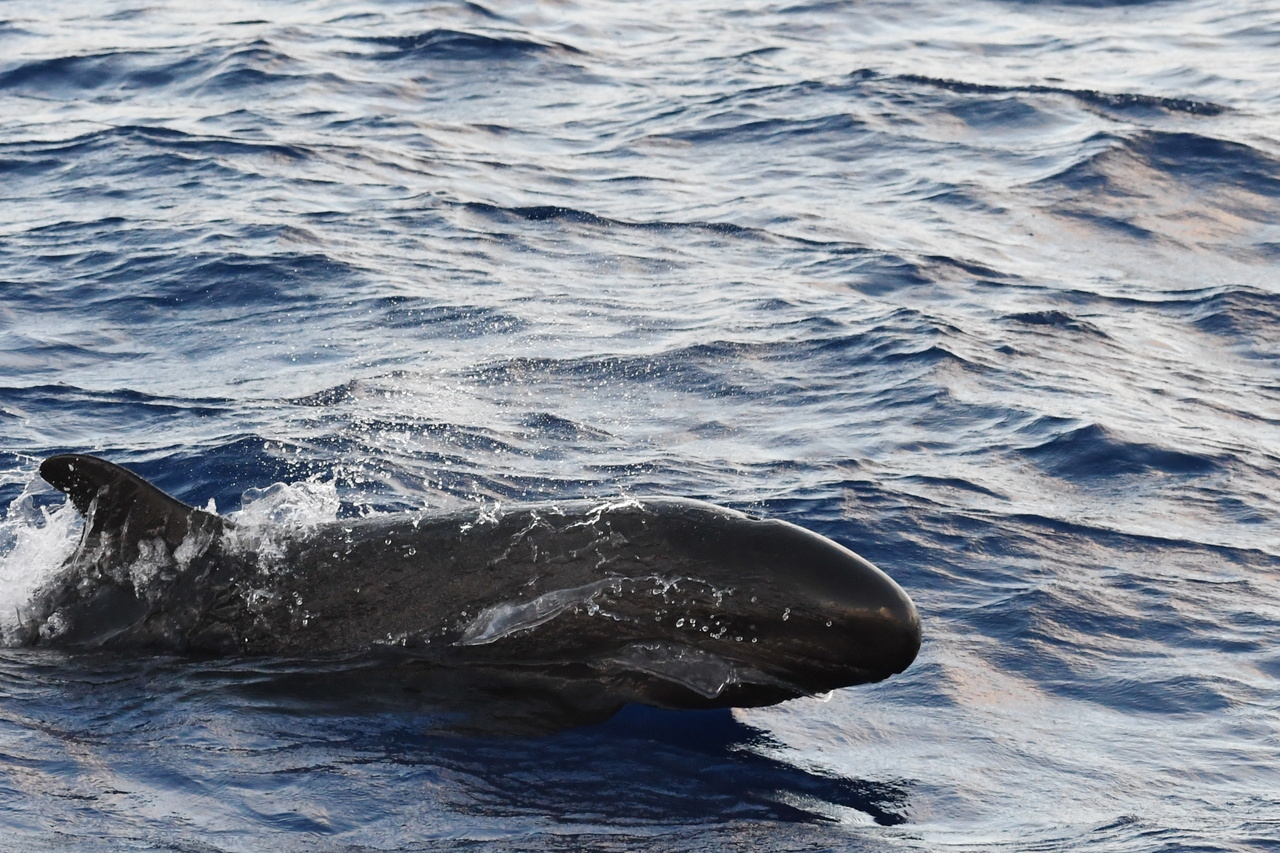 The next few hours were spent truly learning the ways of the false killer whale. That is, in perfect conditions, with acoustic detections of them all around the vessel, we spotted just a couple of individuals and for only a brief period of time. I loved every second! Our experience shed light on why, with depredation being a fairly common occurrence in Hawaii fisheries, the fishermen themselves very rarely see the animals responsible. This is exactly why many species of cetaceans are so poorly understood and efforts such as HICEAS are vital to improving our understanding of them. As someone interested in working at the intersection of cetacean ecology and human impacts on protected species, I had an eye-opening experience and incredible privilege. Thanks to all the Sette scientists and crew who made it so memorable! 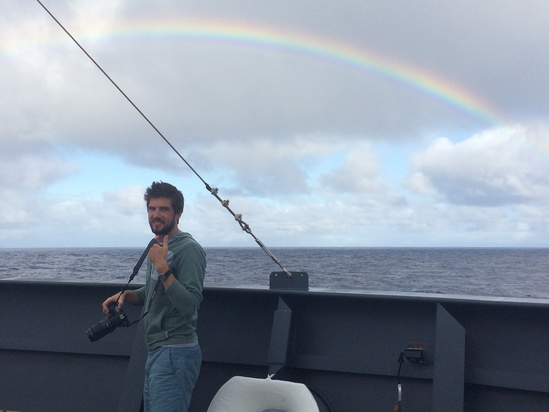 Seth Sykora-Bodie with a rainbow in the background. Credit: NOAA Fisheries/Suzanne Yin

My doctoral research is focused less directly on marine mammals and more broadly on using various ecosystem management techniques to conserve, protect, and recover threatened and endangered species such as whales and dolphins. As biodiversity conservation has become a key issue on the global agenda, scientists and managers alike have focused on improving methods for reducing human impacts to marine ecosystems—one of which is through the use of marine protected areas (MPAs) such as the Papahānaumokuākea Marine National Monument (PMNM). MPAs such as PMNM can offer protection to vulnerable wildlife from fisheries interactions, pollutant accumulation, and other human impacts. Understanding how to design MPAs or other management actions requires understanding the population status and trends of the focal species, emphasizing the importance of surveys like HICEAS that focus on population assessment. 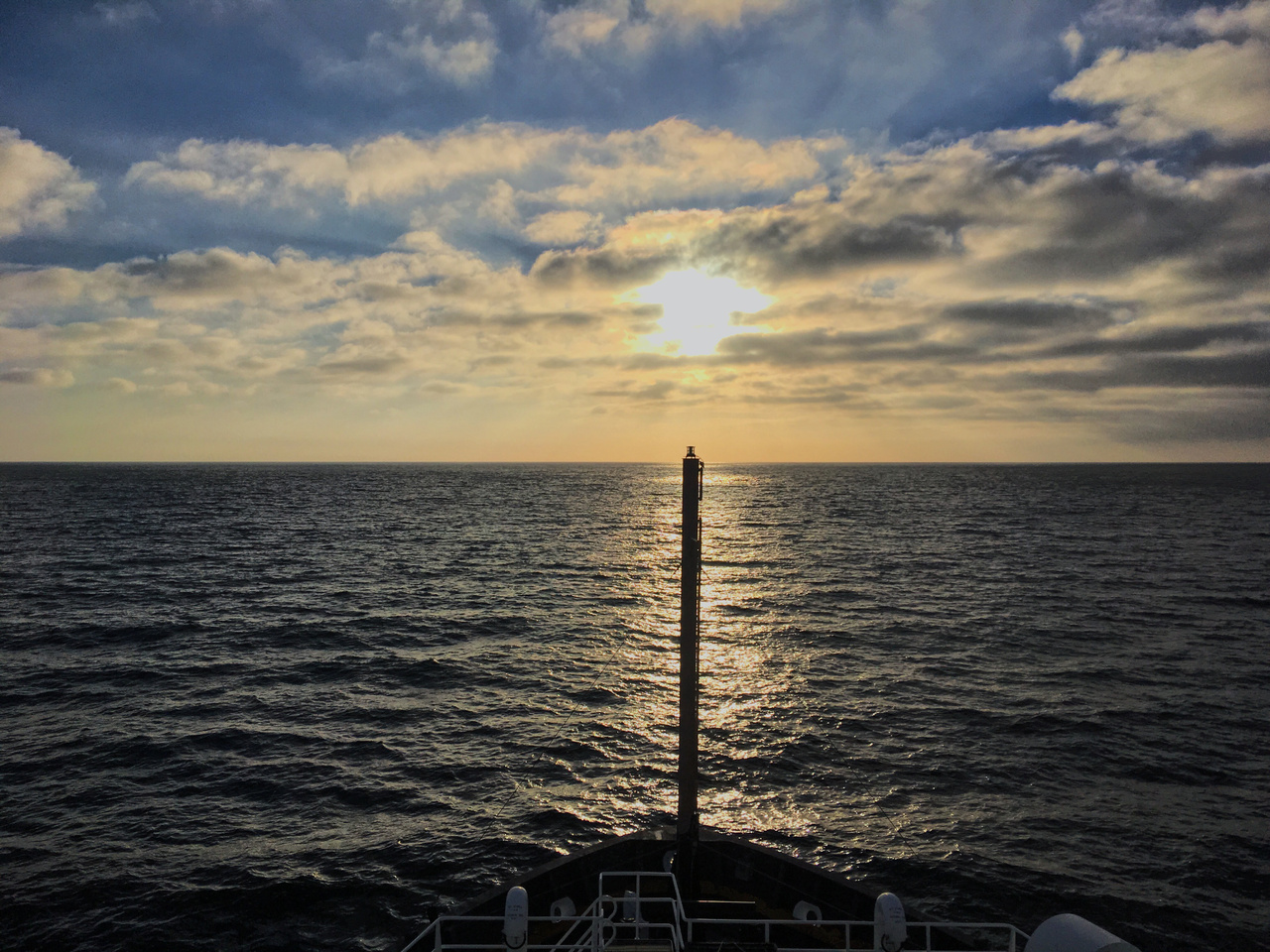 The Lasker steams west from San Diego to join the search for whales and dolphins around Hawaii. Credit: NOAA Fisheries/Seth Sykora-Bodie.

Past efforts to design and manage MPAs have in many cases resulted in limited benefits to wildlife and ecosystems, while reducing economic opportunity for fishing communities and others; addressing these dual challenges is the goal of my research. To do so, I am situating my work at the intersection of conservation biology, spatial ecology, and environmental politics because environmental stewardship requires an intimate understanding of both natural and social system dynamics. As a result, I spend days in meetings negotiating the boundaries of new marine reserves, but I also spend them outdoors (often with NOAA colleagues!) trying to better understand the structure of the cetacean (or other focal) population at the center of conservation efforts.

Joining HICEAS was particularly special to me for a few different reasons. First, I had never been on a cetacean survey in the Pacific, so it was a chance to see new species like the false killer whale. For someone like me, whose research is more motivated by the concern for wildlife than by theoretical and technical questions, I need to see something swimming around in the ocean at least a few times a year. 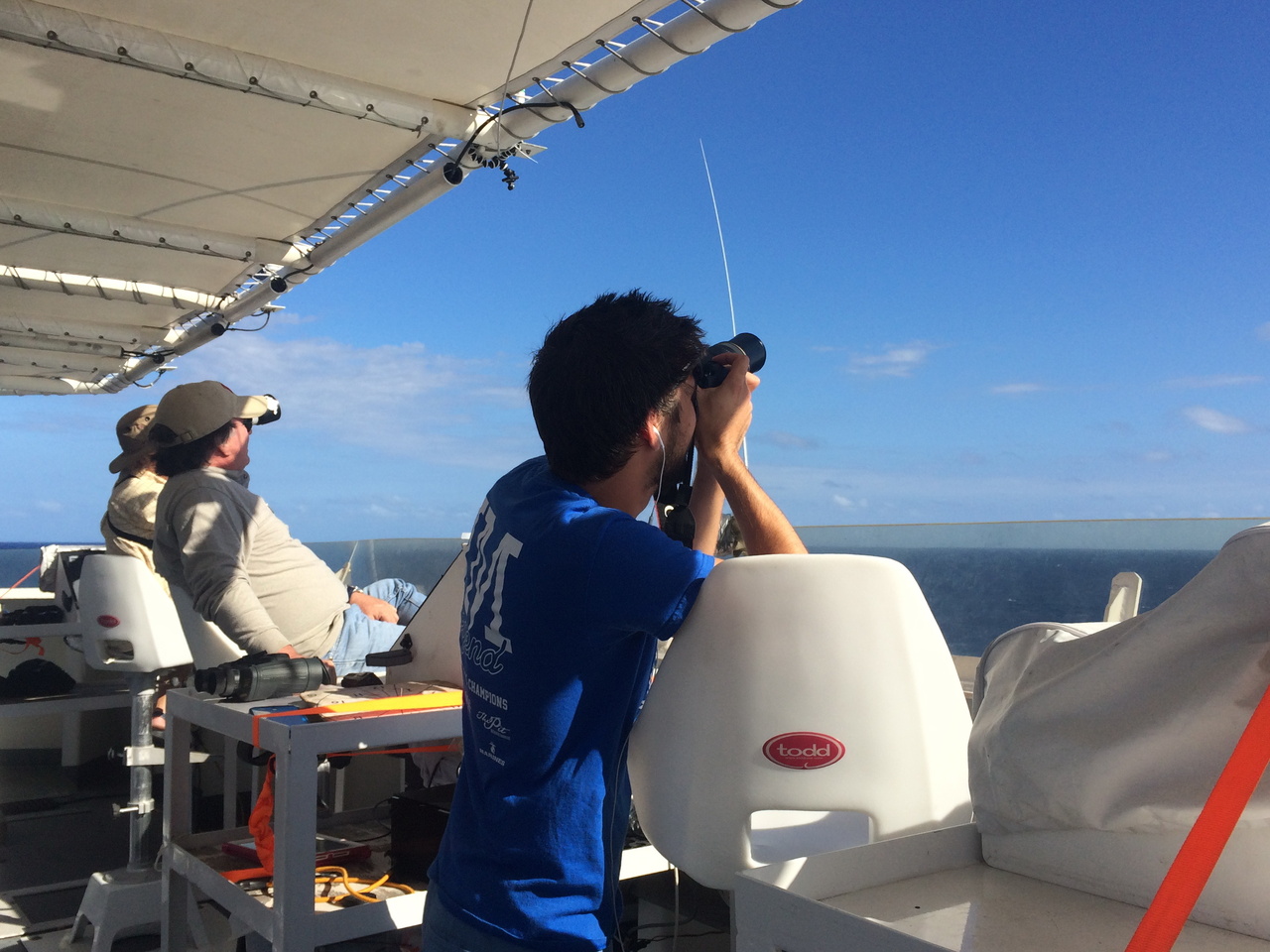 Besides the species we expected to see, we also spent a day searching for the elusive Cross Seamount beaked whale. Scientists from the Pacific Islands Fisheries Science Center have previously recorded sounds from a beaked whale near Cross Seamount that are unlike the sounds from known beaked whale species. As a result, our tracklines south of the main Hawaiian Islands traversed Cross Seamount in an attempt to identify what has mystified scientists up until this point. On several occasions, our acoustics team heard clicks that resembled what we were searching for, and we were even able to catch a quick glimpse of a diving animal, but we were unable to identify it before night fell. The fact that a potentially unidentified whale species still exists reminds us that we still have so much to learn about marine ecosystems.

On top of this, I had never been on a ship with seabird observers! Having the chance to sit on the flying bridge of the Lasker asking our bird team about species like Hawaiian petrels and sooty shearwaters was fantastic. Although I have always known that these species are highly migratory, just discussing the distances they fly and how they pinpoint rookeries in the middle of the Pacific Ocean piqued my interest even more. Like migratory cetaceans, the home ranges of seabirds are so vast that conservation measures need to consider the migratory corridors between foraging and breeding areas. Drawing that parallel was important and helped me consider how seabird data might contribute to conservation planning. 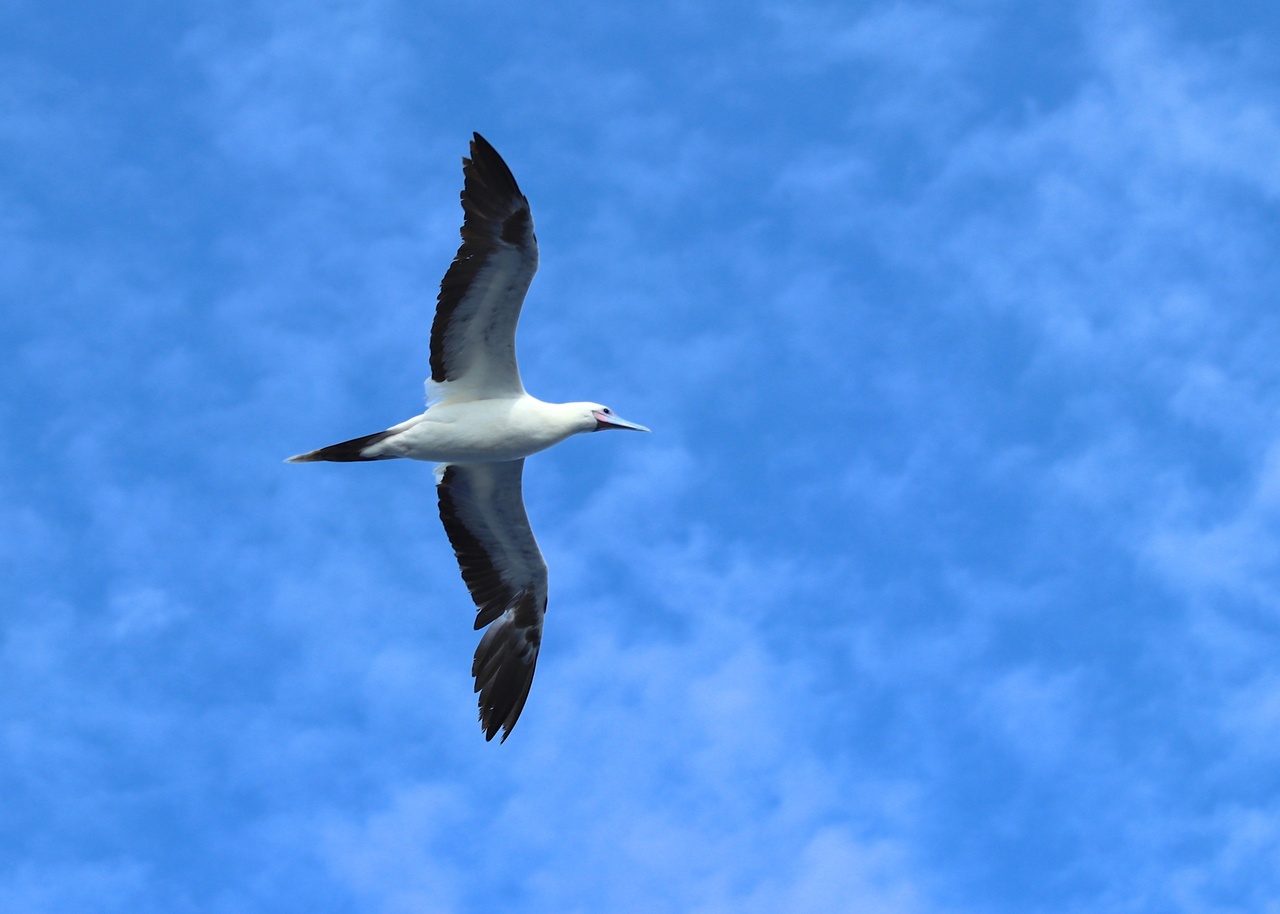 Although Joe and Seth have returned to their studies, HICEAS 2017 is ongoing. Stay tuned to the story map for the latest updates!

Previous: Making Science Happen: The Officers and Crew of the Oscar Elton Sette Next: HICEAS Hilite: Close Encounters of the Rare Kind - The Longman’s Beaked Whale aka Indopacetus