Indopacetus pacificus, or the Longman’s beaked whale, is one of the most rarely seen species of beaked whale. 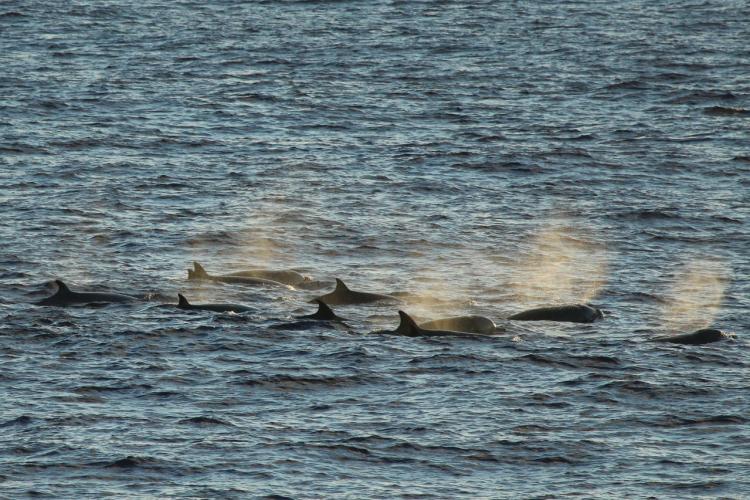 Disclaimer: Biologists, like other groups of people, have a lingo that we use in our daily work. Just like “a slice to go” means a piece of pizza to take away to eat, and a “pick-6” is an interception and touchdown in football, biologists use terms meant to make our communication as clear and efficient as possible. All animals have a scientific name in Latin and a common name, whether it is Homo sapiens (human), Phoebastria nigripes (Black-footed Albatross), or Gorilla gorilla (no explanation necessary). Common names can sometimes be confusing. For instance, the short-beaked common dolphin (Delphinus delphis) and the long-beaked common dolphin (Delphinus capensis) are indeed common in some locations. But Delphinus are not so common in other parts of the world (they’re not even found in Hawaiian waters), where another species of dolphin may be the ‘common’ dolphin. In Hawaii, the most commonly seen dolphin is the spinner dolphin (Stenella longirostris). Additionally, we are an international community of scientists, and a common name in English may not directly translate in another language. Thus, we often use scientific names, even in our casual everyday conversation, so that we can speak about animals using a shared language.

Indopacetus?! That was my question to the other Hawaiian Islands Cetacean and Ecosystem Assessment Survey (HICEAS) observers after I raced up to the flying bridge of the NOAA Ship Reuben Lasker. The visual team had called on the VHF radio, informing the acoustics team and everyone who had a radio that they had a sighting. I wasn’t on watch, but I climbed the 31 stairs from my room up to the flying bridge to find out more. They described what they had seen through the 25-powered binoculars that we call “big eyes”—quite a few animals, all together, puffy blows, light in color, big size even though they were still distant. And so I said it again, “Indopacetus?!” A fellow observer nodded his head and said, “I think so.” And I smiled. You could feel a frisson of excitement from everyone on the flying bridge. Most of the scientific party on the Lasker had not seen this species before. This was going to be good!

Indopacetus pacificus, or the Longman’s beaked whale, is one of the most rarely seen species of beaked whale. In fact, we have seasoned colleagues who have sailed in tropical waters for years and have never seen them. If you ask a cetacean observer working in Hawaii what species is at the top of their “to see” list, for most, it’s Indopacetus. For those of us who have seen them, you can feel the sense of awe (and envy?!) when someone asks, “You’ve seen Indopacetus?”

Until about 20 years ago, we only really knew about these toothed whales from two skulls, one from Somalia and one from Australia. They were a mystery species, which is surprising because they aren’t small in size or particularly cryptic once you find them (which of course isn’t easy)! For years, scientists had reported sightings of a tropical bottlenose whale (a toothed whale with a bulbous melon, which is sort of like having a big forehead).  But, it wasn’t until 2003 when scientist Merel Dalebout and colleagues, using genetic samples from stranded animals, determined that the tropical bottlenose whale and Indopacetus were the same animal. 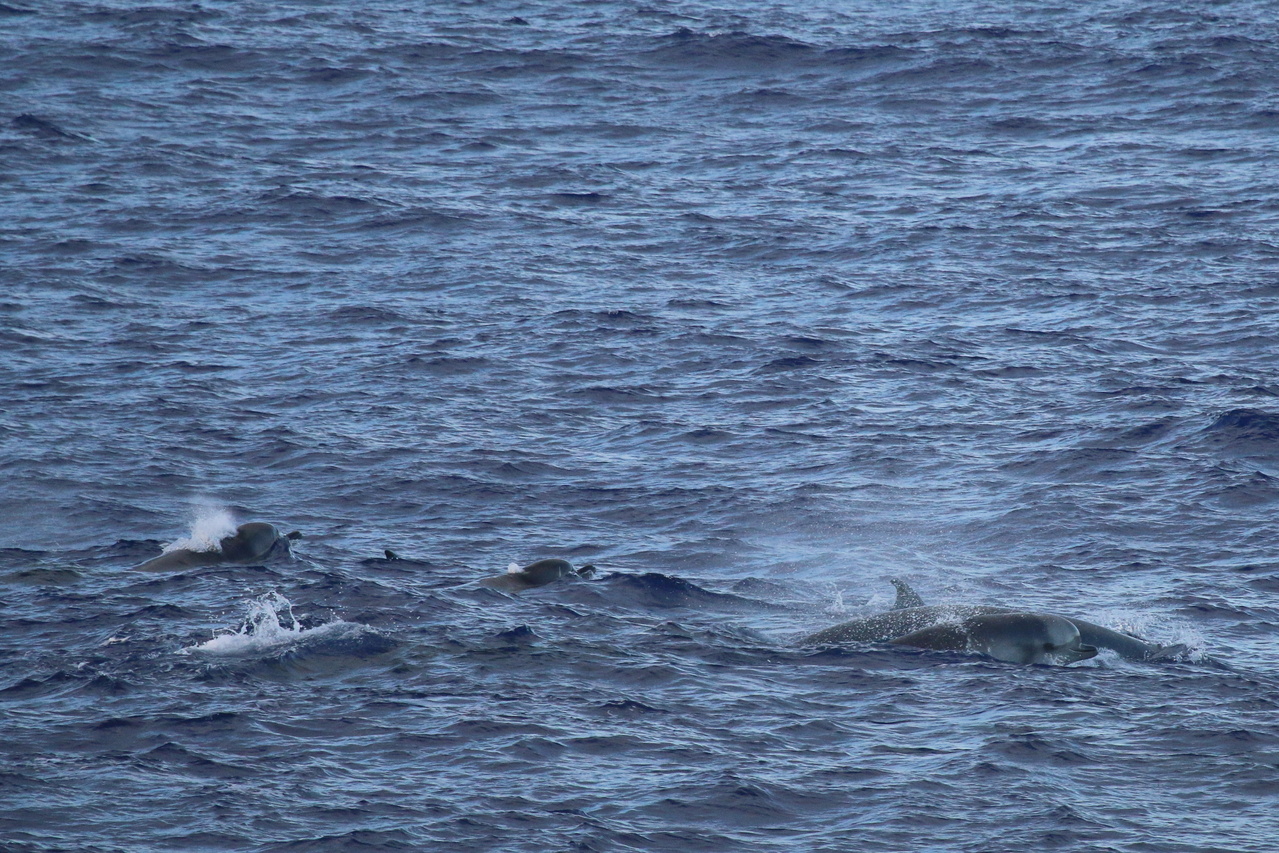 The face of an Indopacetus, a rare and exciting sight! Credit: NOAA Fisheries/Paula Olson (Permit #20311)

Indopacetus can be found in large groups, from a handful to upwards of 100 individuals. They are large in size (up to 20 feet) and have a visible blow. They can be tan to light brown in color and have a very distinct rostrum (beak). They can often be found associating with short-finned pilot whales (Globicephala macrorhynchus) and several species of smaller dolphin. In one of our recent HICEAS sightings, they were mixed with a large group of short-finned pilot whales. From stranding and sighting data, we do know that they seem to have a vast distribution, inhabiting tropical waters in the Pacific and Indian Oceans. Yet, we know next to nothing about their diet, diving capabilities, or reproductive behavior. Are they more active during the day or night? Or are they a crepuscular species that is more active at twilight? 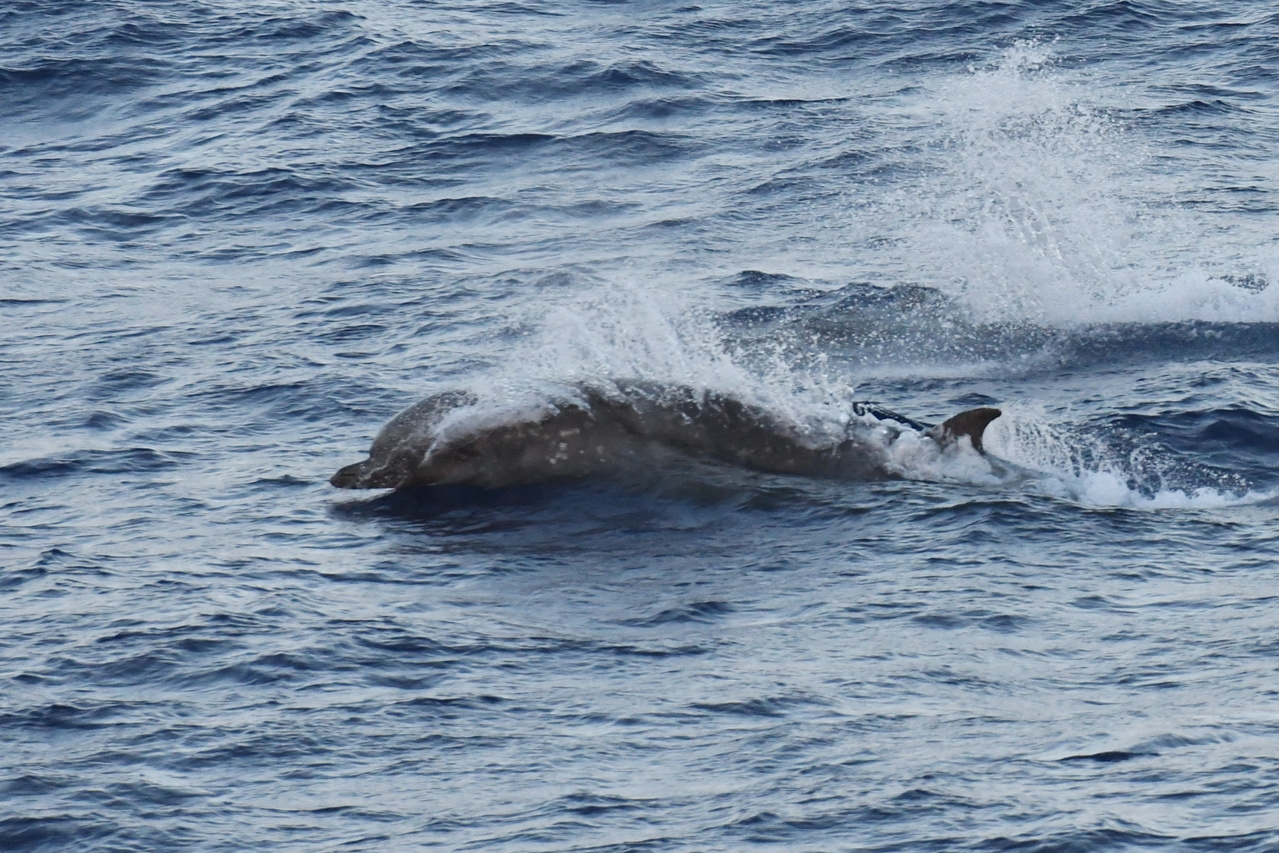 This Indopacetus surfaces quickly and moves through the water even faster, giving us few chances to uncover their secrets. Credit: NOAA Fisheries/Adam Ü (Permit #20311)

So far during HICEAS, both the Lasker and the NOAA Ship Oscar Elton Sette have each had a few sightings and acoustic detections of Indopacetus in various parts of the study area, with some of the sightings and detections over a thousand nautical miles away from each other. During the last HICEAS in 2010, there were only three Indopacetus sightings, but one of them involved a large group of approximately 100 animals in the northwestern reaches of the study area. We were all hoping we might have a sighting like that again this year, and sure enough, we sighted from the Sette a similar-sized group of animals just 150 nautical miles from where they were seen in 2010. Was it the same group? Unfortunately, we were unable to collect genetic samples in 2010 or 2017, so we may never know. Have we found an Indopacetus hot spot? Perhaps. Only further research will tell. We can only hope the remainder of HICEAS will bring more sightings. There is one thing we do know for sure–for those of us lucky enough to have an Indopacetus sighting as part of our HICEAS 2017 experience, it is something we will always remember! 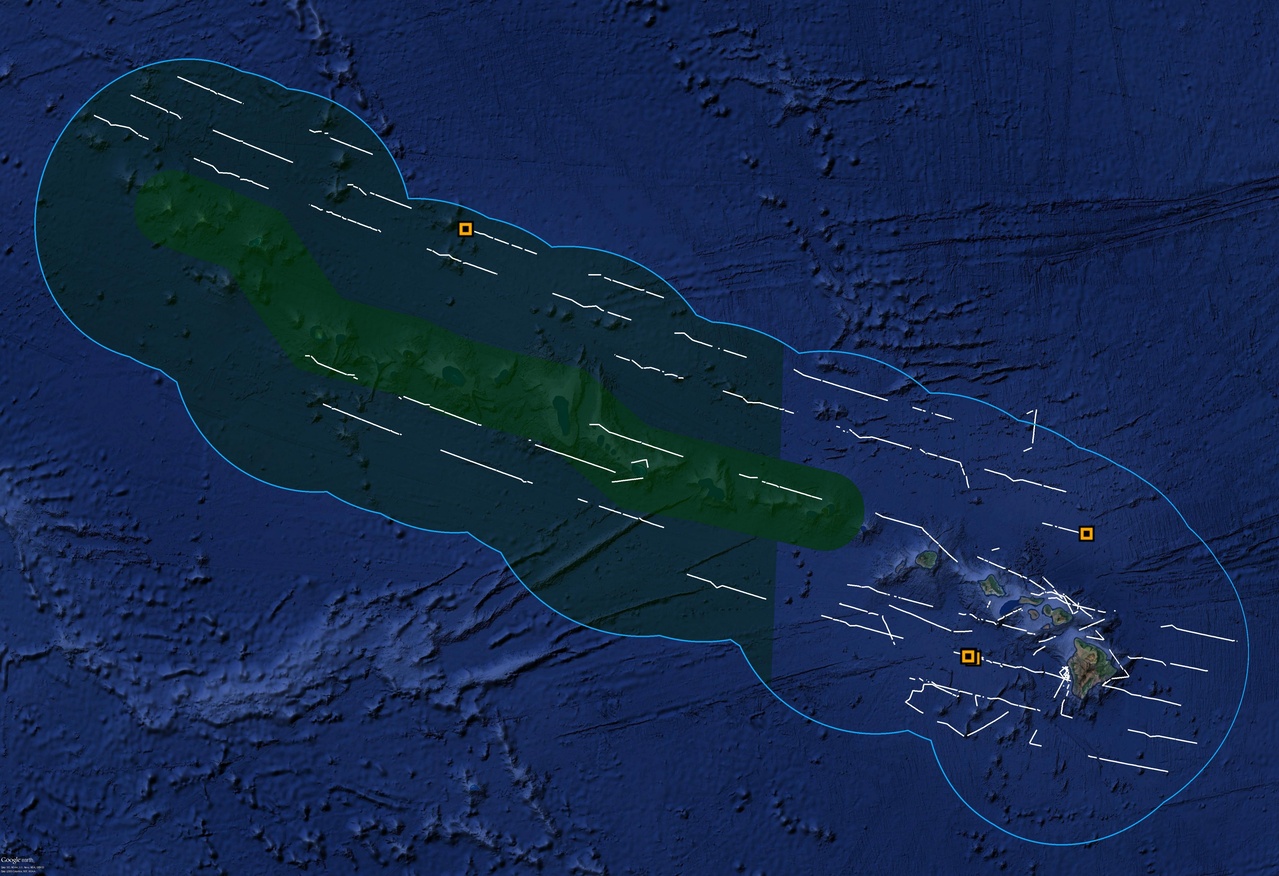 This map of the Hawaiian Islands shows all of the HICEAS survey effort (white lines) through September 5, 2017, with Indopacetus sightings shown as orange squares. The area shaded in green is the Papahānaumokuākea Marine National Monument, with slightly darker shading showing where the Monument was expanded in 2016. Credit: NOAA Fisheries

What else will the remainder of HICEAS bring? Follow our Story Map!

Previous: From Graduate Studies in Beaufort, North Carolina, to Measuring Seas in Hawaii with the Beaufort Scale Next: The HICEAS Adventures Continue: Two Ships Join Forces to Search for Whales and Dolphins in Hawaiian Waters