The NOAA Ship Reuben Lasker arrives in Hawaii to join NOAA Ship Oscar Elton Sette and survey for whales, dolphins, and seabirds near the Hawaiian Islands. 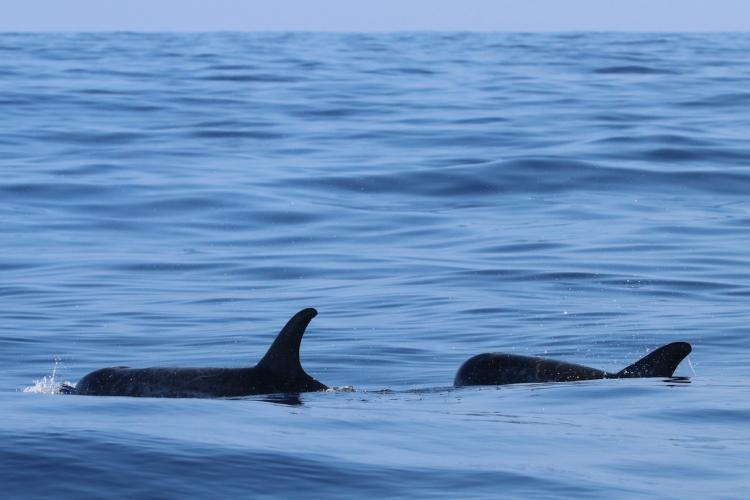 When we last checked in on the progress of the Hawaiian Islands Cetacean and Ecosystem Assessment Survey (HICEAS), the first leg of HICEAS 2017 aboard the NOAA Ship Oscar Elton Sette had been completed. A lot has happened since then! To begin with, the Sette finished its second leg while the NOAA Ship Reuben Lasker joined the survey and accomplished its first HICEAS leg. The Lasker traveled to the Hawaiian Islands study area from its home port in San Diego, CA, a journey that took almost 9 days and spanned approximately 2,000 nautical miles. Here, we fill you in on our respective trips as HICEAS Cruise Leaders, Amanda on the Sette and Jeff on the Lasker.

After a brief in-port following the first leg, the Sette set sail again on August 8 for a 29-day journey that ended on September 5. Sette Leg 2 focused on the northern portion of the study area, from above the main Hawaiian Islands in the east to the far northwestern reaches above Midway and past the International Dateline. We were pretty lucky with weather during this leg, with a majority of our 2,315 nautical miles of daytime visual effort occurring in Beaufort sea state conditions of 4 or less, which is atypical thanks to our persistent trade winds. With the improved sea conditions, we were better able to visually detect groups of cetaceans (whales and dolphins), which is reflected in a relatively high number of cetacean sightings – 70 groups in total.  Nevertheless, we had several days with great weather when we did not see or hear any cetaceans.  On these days, we were far from land and in-between the seamounts that dot the region. We were reminded that parts of our study area are often referred to as a “tropical desert” because the nutrient-poor waters make it difficult to support high densities of cetaceans. 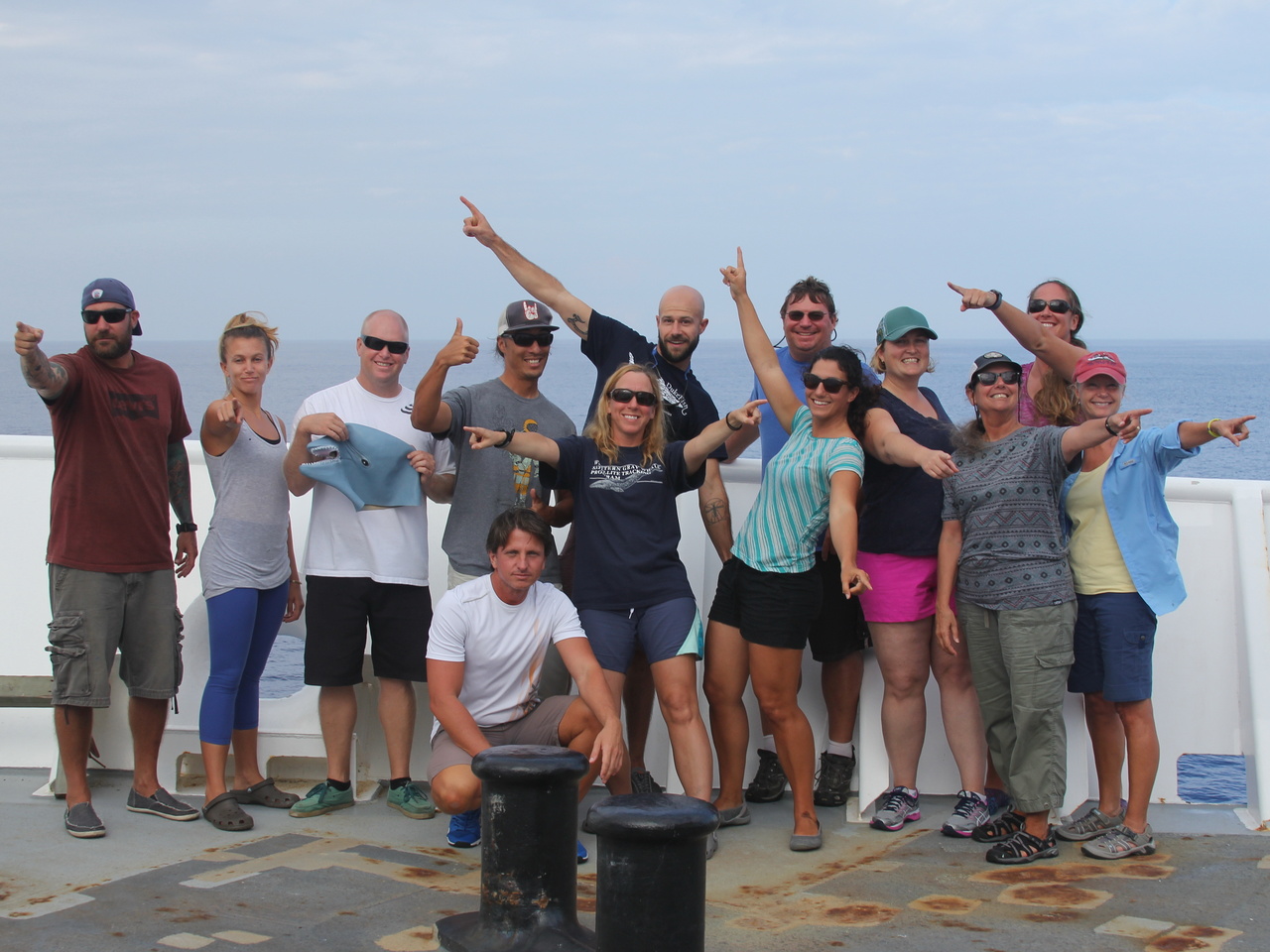 The 70 sightings made by the cetacean observers included at least 13 species, ranging from the small spinner dolphin to the large Bryde’s whale. The most frequently sighted species was the striped dolphin, seen a whopping 14 times, followed by the short-finned pilot whale, which was seen 10 times. Most other species were seen only 1-2 times. Our most exciting sightings were of beaked whales, which are elusive and difficult to detect. First, we had 2 sightings of Longman’s beaked whales, including a group with almost 100 animals, a rare and poorly-known species. Then, we had a small group of Blainville’s beaked whales approach the ship very closely multiple times during an extended period at the surface, seemingly as curious about us as we were about them. We took almost 10,000 photos during these cetacean sightings, from both the ship and seven launches of the small boat. We collected 33 biopsy samples (small tissue plugs used for genetic and other analyses) from four species (spotted, rough-toothed, and bottlenose dolphins and short-finned pilot whales) and deployed satellite tags on three short-finned pilot whales to study the movements of these individuals. 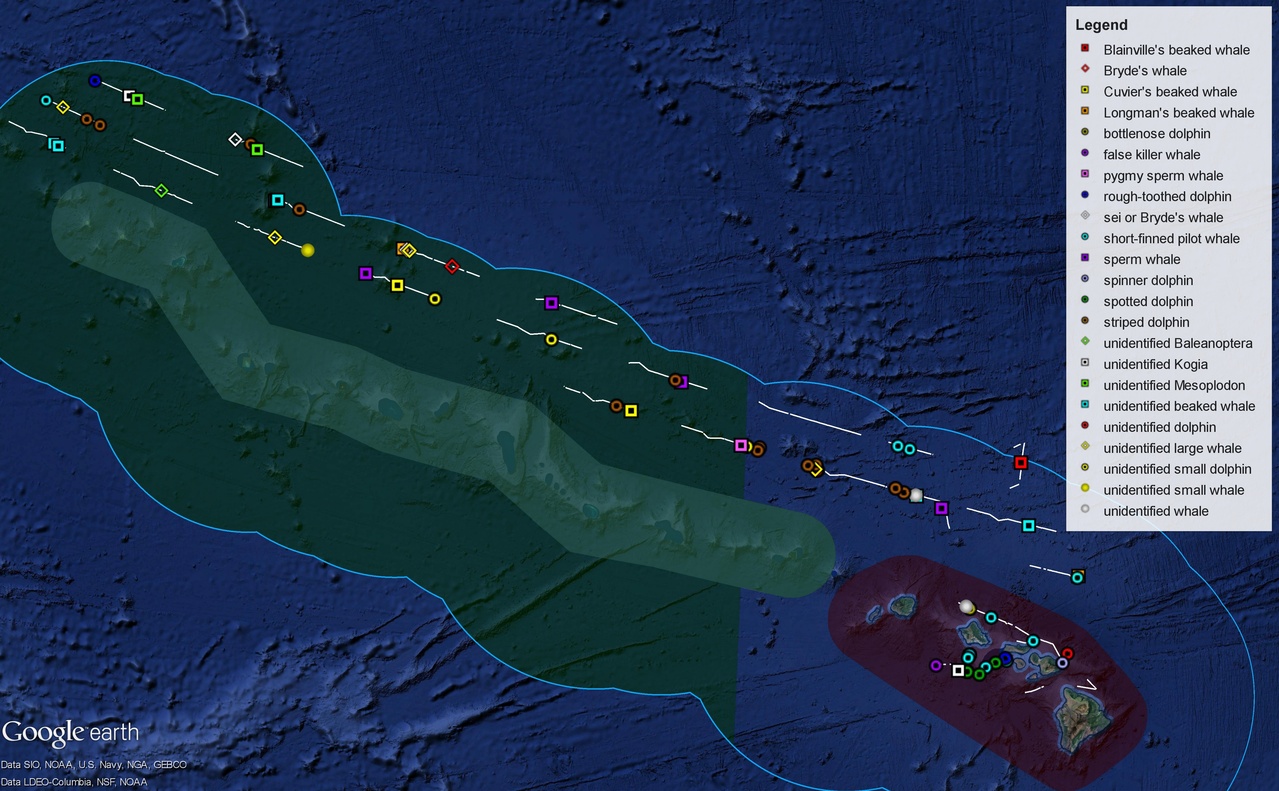 Daytime survey effort (white lines) and cetacean sightings (see legend) made within the Hawaiian EEZ (blue line) during HICEAS 2017 Leg 2 aboard the Oscar Elton Sette. The red shading is a focus area around the main Hawaiian Islands, and the area shaded in green is the Papahānaumokuākea Marine National Monument, with slightly darker shading showing where the Monument was expanded in 2016. Credit: NOAA Fisheries

The acoustics team was also busy, detecting 127 vocal groups of cetaceans. They also kept our Drifting Autonomous Spar Buoy Recorder, aka DASBR, project going. During Sette Leg 2, we released seven DASBRs to listen for vocalizing cetaceans in our absence and picked up three others from Leg 1 that were full of data! We also deployed 43 sonobuoys that allow us to detect vocalizing baleen whales that may be in the area. The seabird observers recorded thousands of bird sightings from at least 35 species, with the Herald/Henderson’s Petrel, Flesh-footed Shearwater, Sooty Shearwater, Parasitic Jaeger, and Pacific Golden Plover all new species for HICEAS 2017. The Pacific Golden Plovers were returning to their wintering grounds in Hawai’i after spending a summer in Alaska. Named Kōlea in Hawaiian, these shorebirds are known to return to the exact same location year after year, even the same yard! Although seabirds tell us a lot about ocean productivity in our study area, we also conducted 35 CTD (Conductivity-Temperature-Depth) casts to learn more about the physical properties of the waters we surveyed. Finally, while we rarely saw the species we were targeting for health assessment using an Unmanned Aircraft System (UAS aka drone) when the winds were light, we were able to make 6 hexacopter flights over short-finned pilot whales. 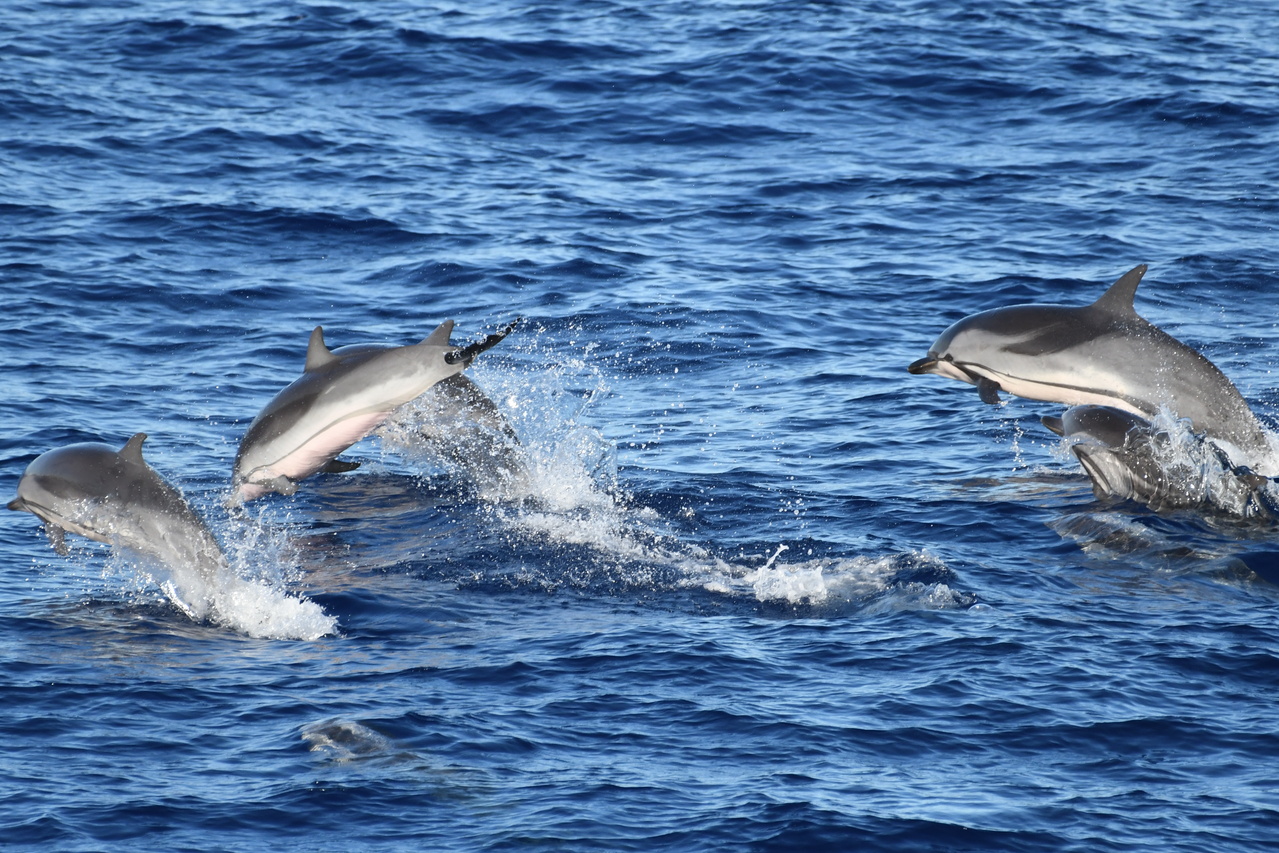 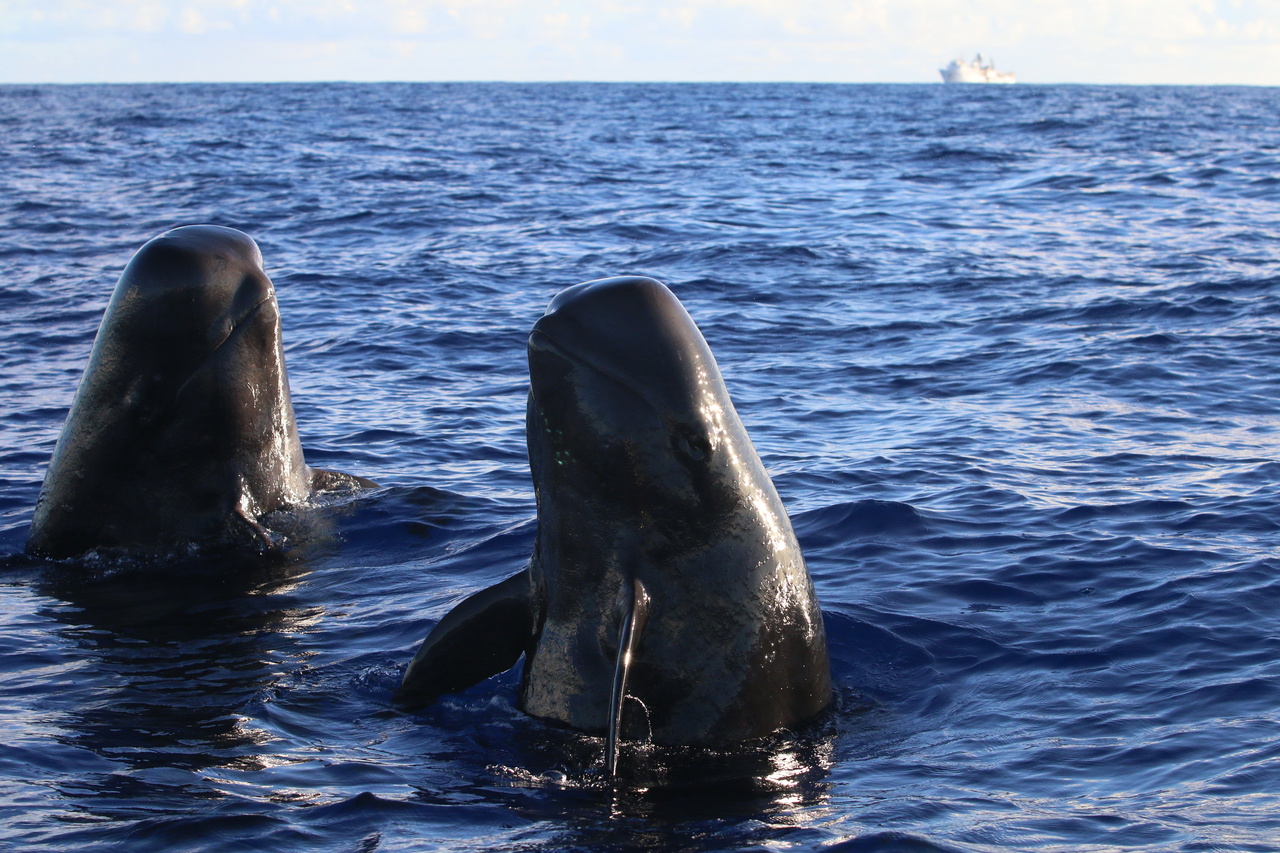 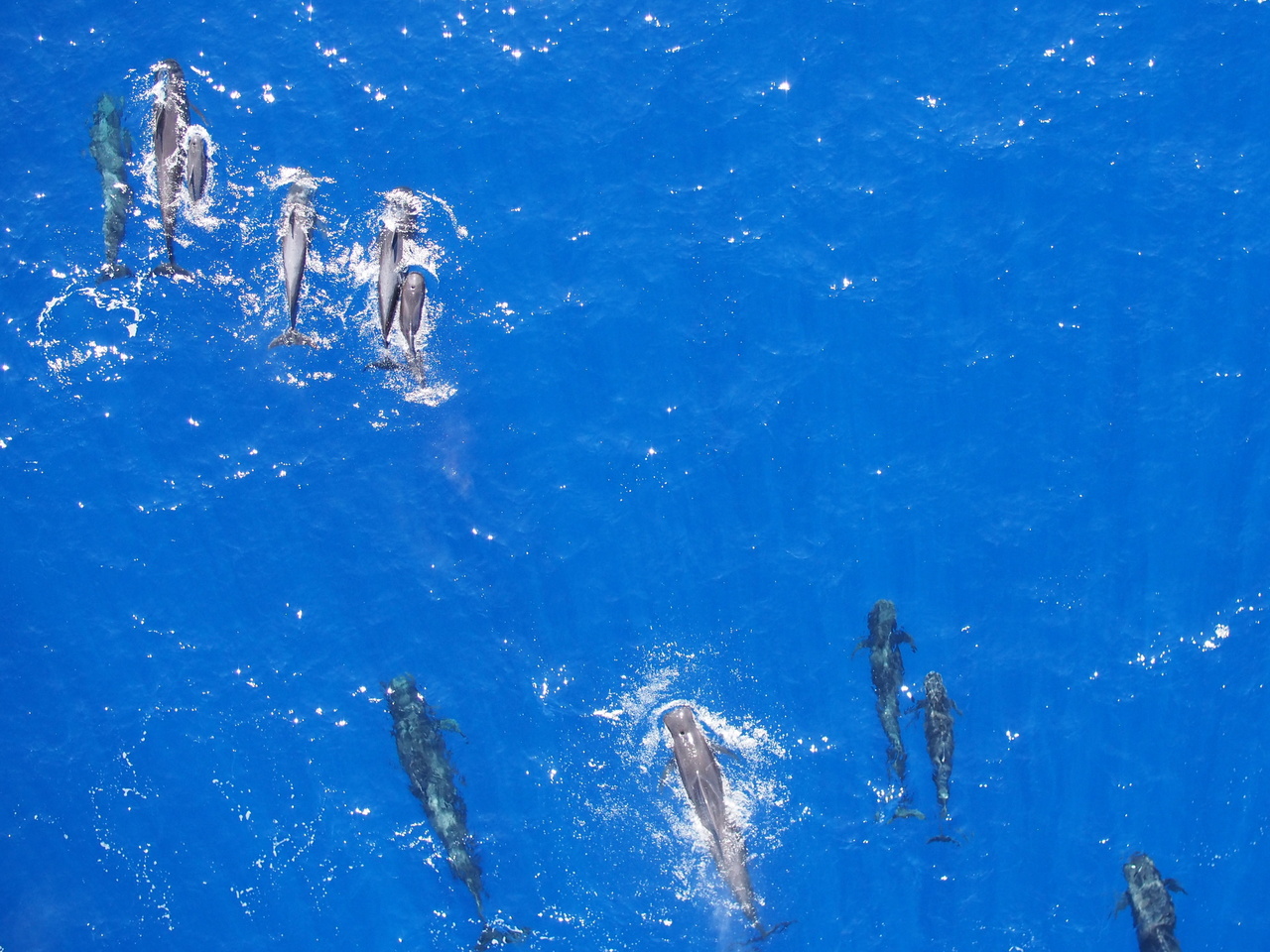 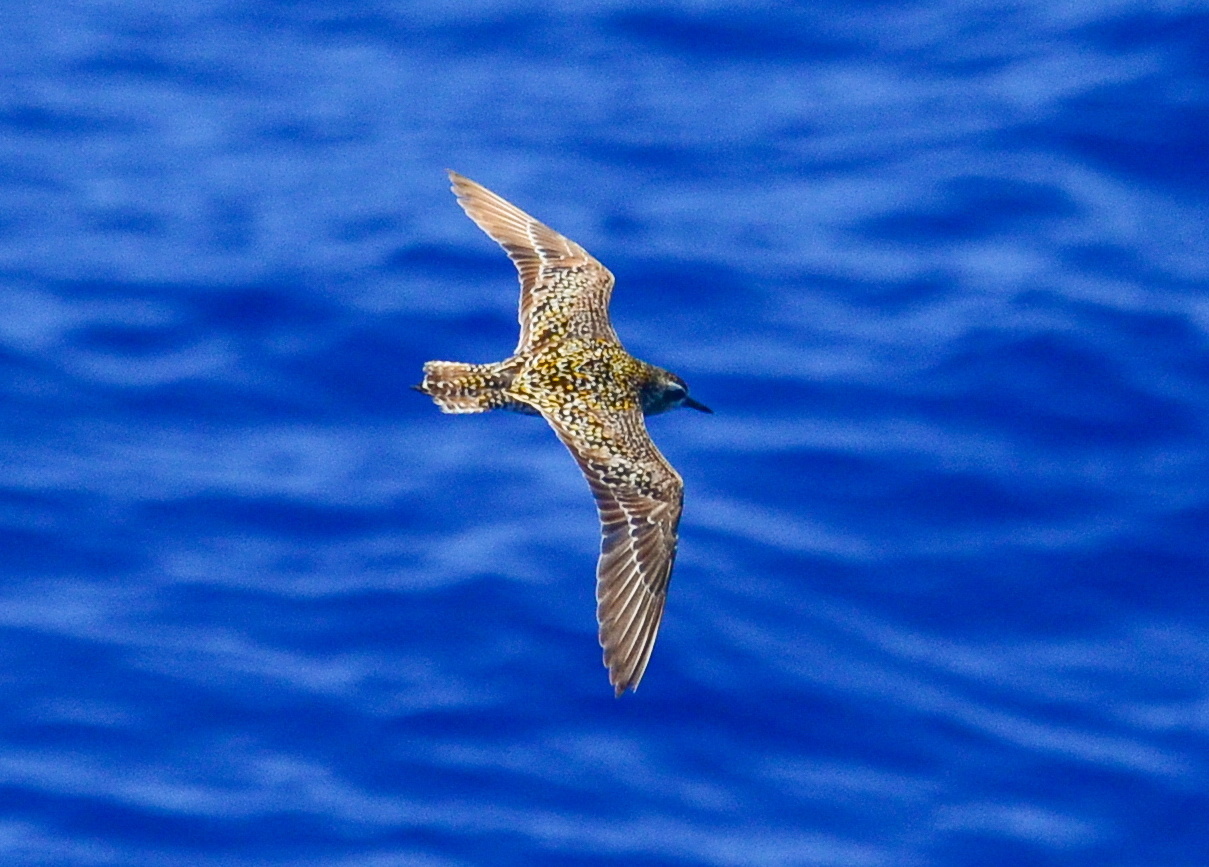 The Lasker left San Diego on August 17 bound for the HICEAS study area. To get there as quickly as possible, the cetacean observers worked in what we call ‘passing mode,’ when the ship does not leave the trackline to investigate sightings. As the days passed, we could tell we were approaching the tropics as air and water temperatures got higher, sightings of tropical seabirds increased, and the trade winds made their presence known. We arrived in the study area in the pre-dawn hours of August 26, conducting our effort from that day forward in ‘closing mode,’ when the ship “closes” on a sighting to have better looks and more time to obtain species identification, group size estimates, and other information. Our effort focused on the area south and east of the main Hawaiian Islands, where we surveyed until September 5, ending our 20-day leg. All told, we completed 1,844 nautical miles of daytime visual effort, with 696 nautical miles in Hawaiian waters. We sighted 53 cetacean groups – 34 of them were in the HICEAS study area. 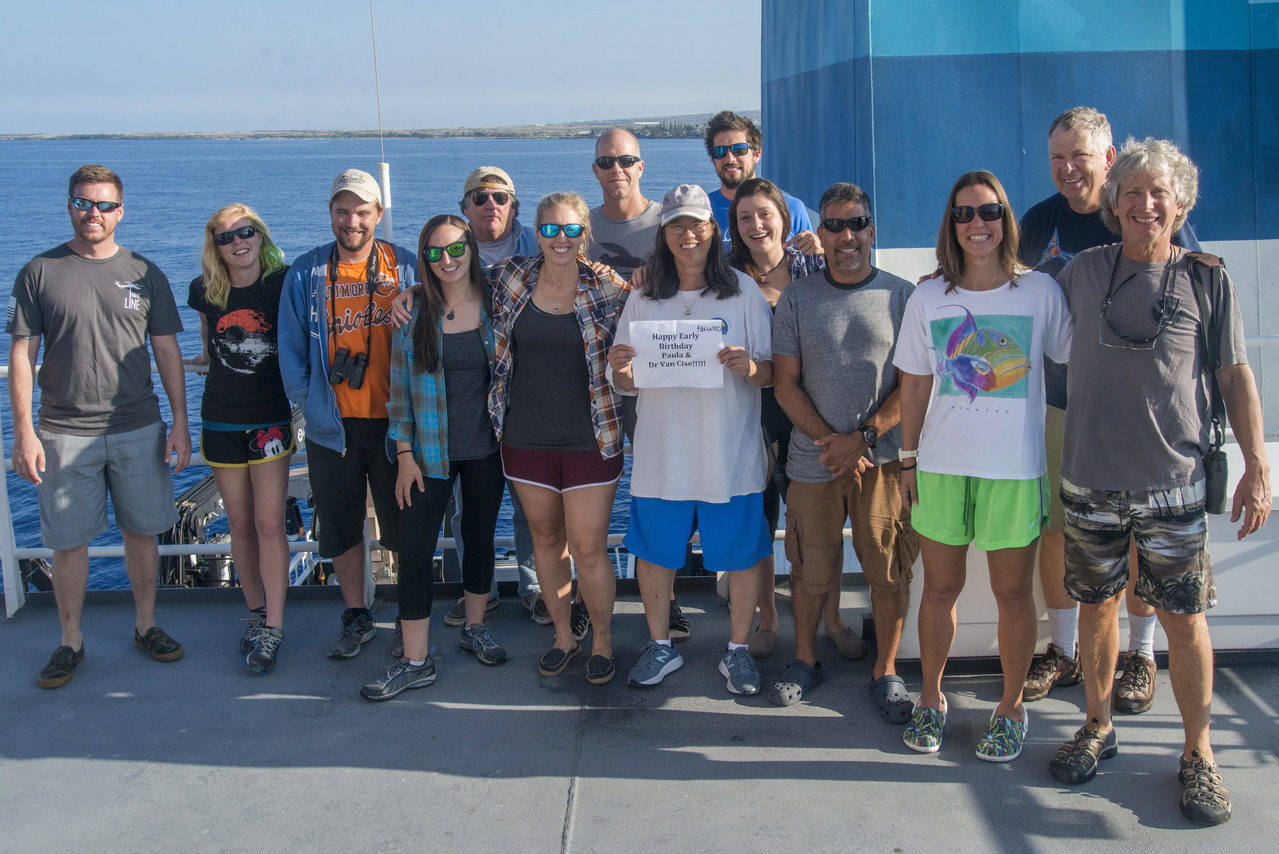 The 34 sightings of cetaceans in the study area were from 10 identified species – all species seen during Sette Leg 2, with the exception of the pygmy killer whale. We collected two biopsy samples, one from a spotted dolphin and another from a rough-toothed dolphin. Like the Sette, we saw Longman’s beaked whales (although three times!), which was a highlight for us also. However, our other exciting cetacean detections occurred acoustically.  One night, at about 10 pm, a few of us were gathered in the acoustics lab. The hydrophone array was still in the water recording, but no one was actively monitoring it, as is usually the case once the sun sets and the observers go off effort. At just the right moment, faint calls appeared on the computer monitor, and we decided to put the headphones on to listen. Good thing, because killer whales were in the area and gave us quite a performance. We were treated to a vocal repertoire that sounded somewhat Shamu-like and lasted for over an hour. If only there had been light left outside to see the animals because it would have been a spectacular encounter. 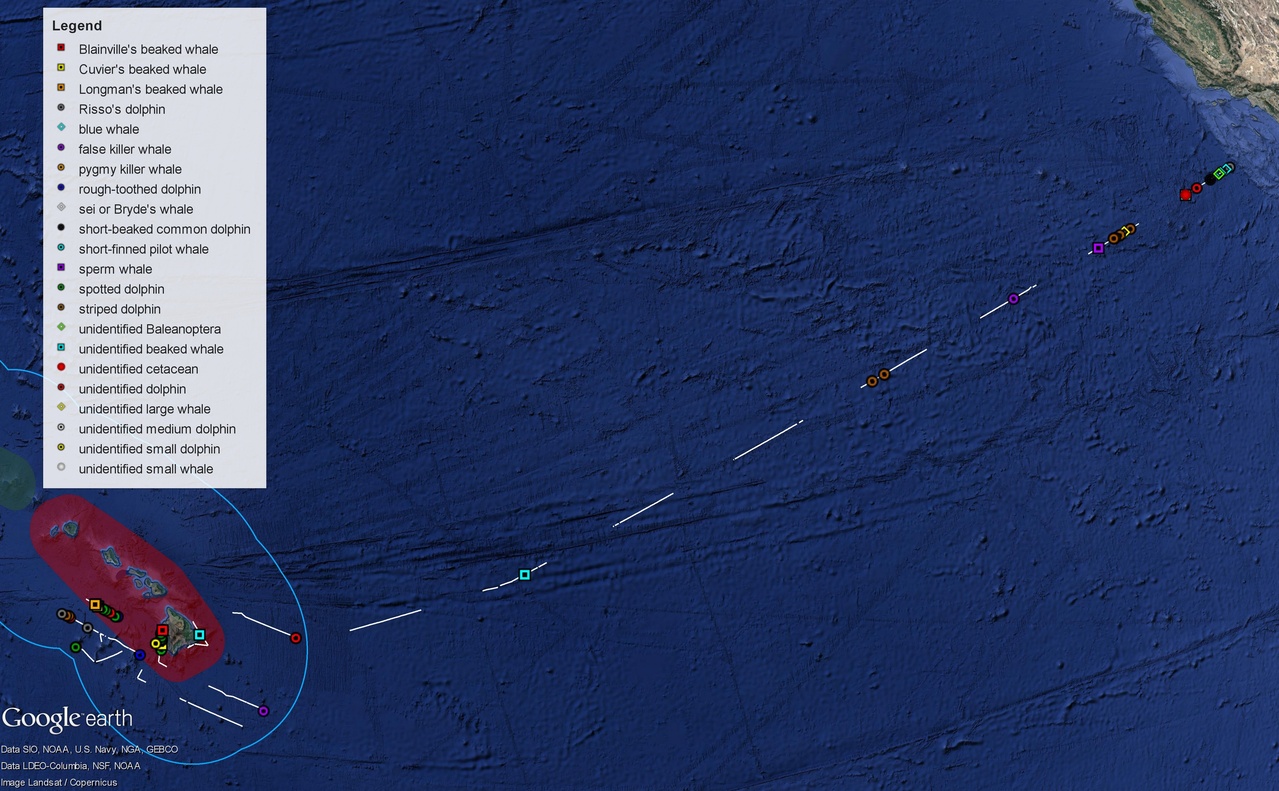 Daytime survey effort (white lines) and cetacean sightings (see legend) made during HICEAS 2017 Leg 1 aboard the Reuben Lasker, including its transit to the Hawaiian EEZ (blue line). The red shading is a focus area around the main Hawaiian Islands, and the area shaded in green is the Papahānaumokuākea Marine National Monument. Credit: NOAA Fisheries

The most memorable moment of Lasker Leg 1 took place when the acoustic team began detecting the Cross Seamount beaked whale an hour before dusk. This beaked whale, first heard at Cross Seamount, is known only from acoustic recordings and sounds unlike any known beaked whale species with acoustic recordings. With the long, upswept vocalization clicks, there was no doubt that we had found this mystery beaked whale. We acoustically tracked the animal(s) for over an hour hoping to at long last visually identify the species making these clicks. As the sun went down, we were losing hope. Darkness set in, but right before it did, our amazing Lead Cetacean Observer, Suzanne Yin, caught a glimpse of a cetacean that might have been our unknown whale. Unable to get a good look and confirm the species, we at least got one step closer to identifying the mysterious Cross Seamount beaked whale! Overall for acoustics, there were 106 detections of cetacean groups during Lasker Leg 1, and we picked up 2 DASBRs. Finally, the seabird observers encountered 4,916 birds (of at least 15 species) in 28 feeding flocks and recorded 1,830 birds (of at least 42 species) during their strip-transect survey effort. 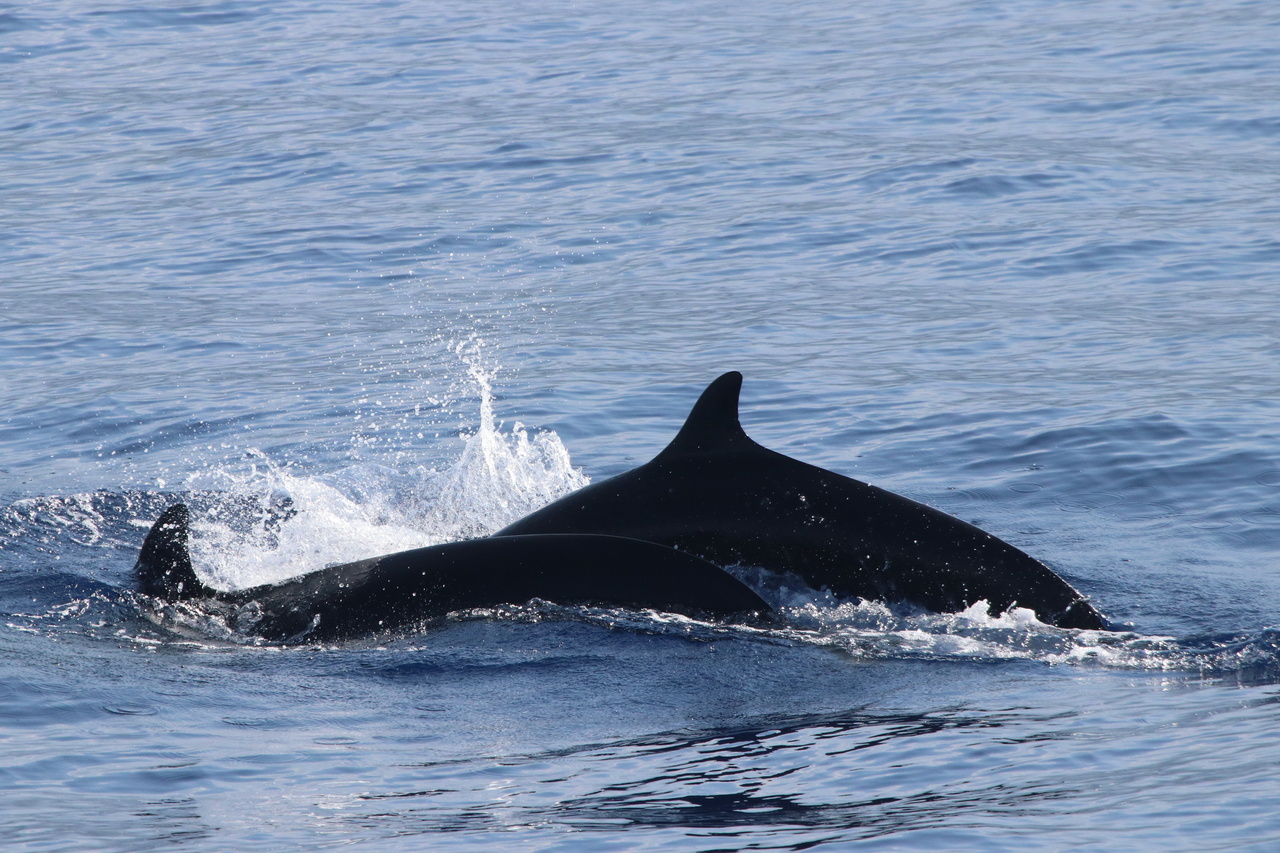 The Sette Leg 2 and Lasker Leg 1 teams appreciated the help of their visiting scientists, Duke University graduate students Joe Fader (Sette) and Seth Sykora-Bodie (Lasker), who wrote a great blog post about their experiences.  The Sette and Lasker went back to sea for their respective third and second legs on September 11. Keep checking the story map for more information on what happened next!

Previous: HICEAS Hilite: Close Encounters of the Rare Kind - The Longman’s Beaked Whale aka Indopacetus Next: Adrift at Sea