Visual observers are vital to locating cetaceans (whales and dolphins) during the ongoing Hawaiian Islands Cetacean and Ecosystem Assessment Survey (HICEAS). The role of an observer is to scan the surface of the water using 25-powered binoculars that we c 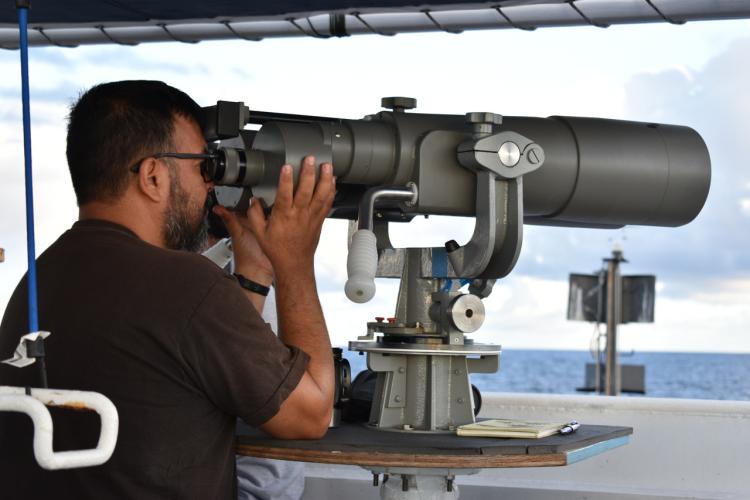 Visual observers are vital to locating cetaceans (whales and dolphins) during the ongoing Hawaiian Islands Cetacean and Ecosystem Assessment Survey (HICEAS). The role of an observer is to scan the surface of the water using 25-powered binoculars that we call “big eyes.” From the big eyes mounted on the ship’s flying bridge, the observers can see up to 7.5 nautical miles from the ship, although they usually focus within 3 nautical miles, where cetacean sightings are less likely to be missed. A right- and left-side observer each scans 90 degrees, looking for cetaceans from the ship’s beam to its bow, a motion that is repeated multiple times over a 40-minute shift. The center observer watches ahead of the ship generally without binoculars and records data. Altogether, the observer team is scanning the water 180 degrees ahead of the ship for animals, suspicious splashes, blows, or flocks of birds that might reveal cetaceans feeding below.

When the visual team spots a cetacean group, the next step is to figure out what species it is and how many individuals are in the group.  While the big eyes are the main binoculars used when searching for cetaceans, as the ship approaches a sighted group, the team switches to smaller 7-powered handheld binoculars that offer a wider field of view at closer distances. If the visual team needs another look once the ship passes the animals, the ship can be turned to pass by the group again or to collect additional information, including photographs or skin samples. When weather conditions and animal behavior allow, a small boat may be launched from the ship to approach the animals for more detailed data collection. 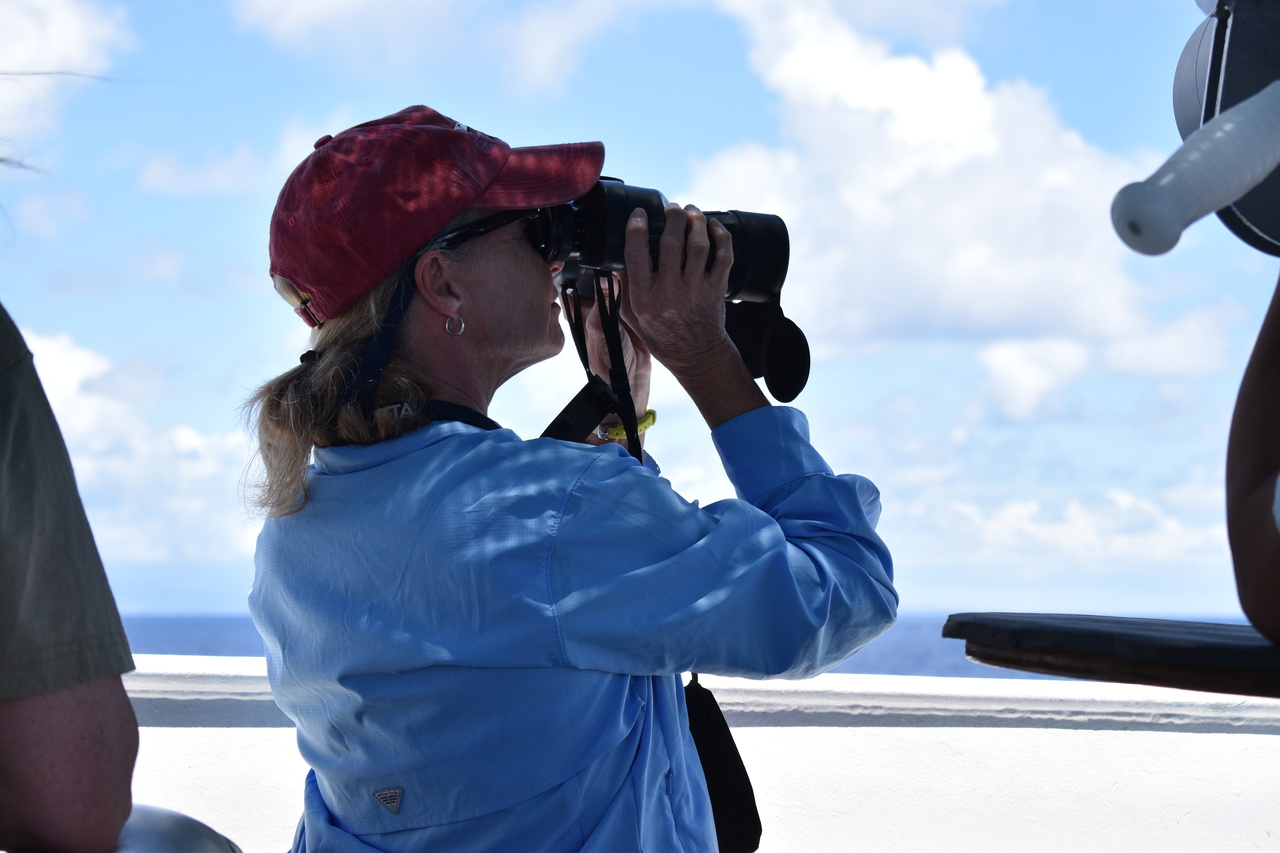 When asked how visual observers prepare for a survey of this size and importance, visual observer Andrea Bendlin responds with, “a LOT of experience.” A visual observer needs to be able to distinguish between a white cap and a splash from a dolphin. “When it’s windy, which is most of the time, you see a lot of white caps, but did you just see a white cap go backwards? That would be the splash from a dolphin instead,” explains Andrea. Andrea describes how there might also be a slight glare or sparkle on the water that could be the back of an animal and be easily overlooked. 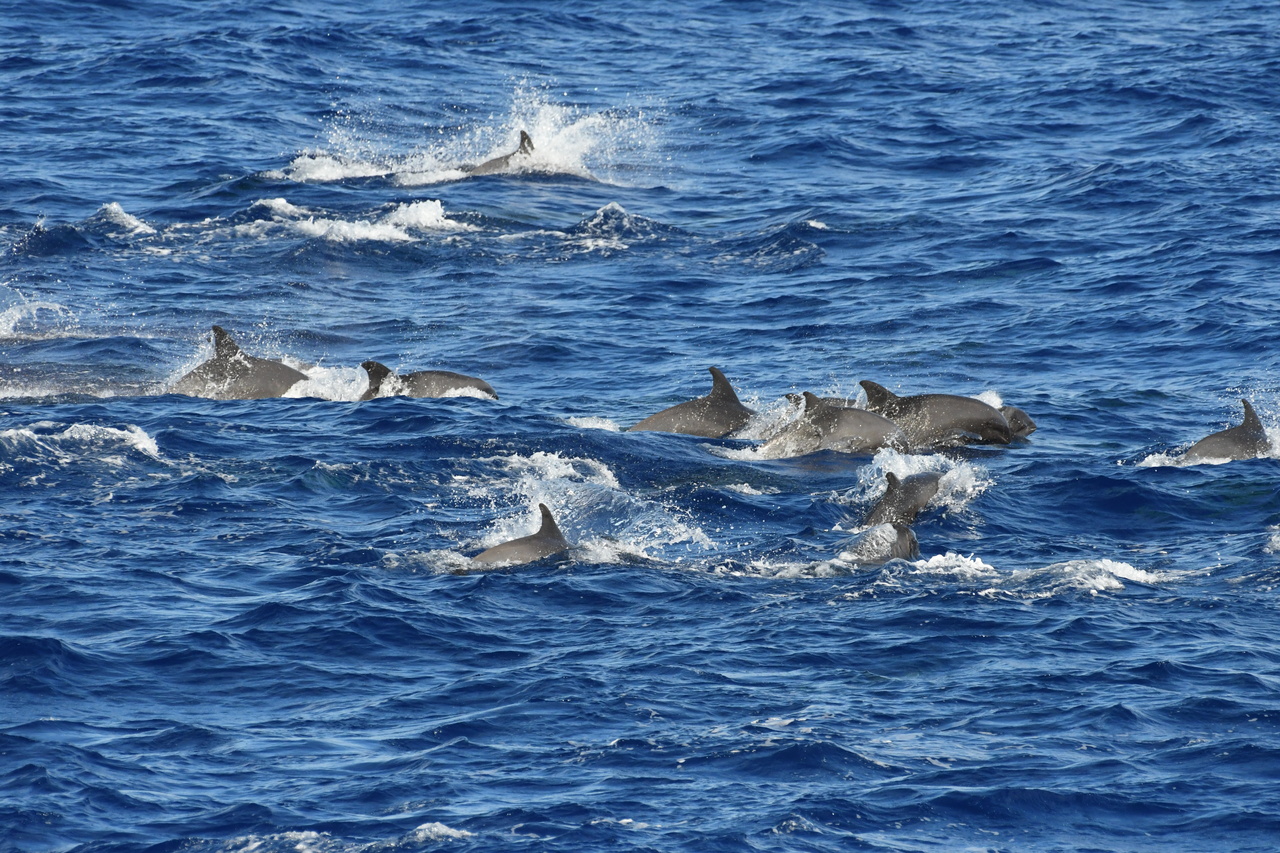 Once distant splashes that caught an observer’s eye, these melon-headed whales come into full view when approached by the ship during HICEAS. Photo taken under research permit by NOAA Fisheries/Adam Ü.

When the visual team sees a group of cetaceans, each person is required to make an estimate of the number of individuals in the group. The team members write their estimates in their own private notebooks and don’t talk about their estimates with their teammates. The numbers are kept a secret so that individual observers don’t change their tendencies in how they estimate group size over time. Early on, the observers are taught how to count cetaceans. Many observers have been calibrated against aerial images of cetacean groups, where the number seen in the aerial image is compared to the estimate from each observer in order to determine the amount of error in the estimate. Since observers usually underestimate how many cetaceans they see in a group, the calibration results can be used to make the group size estimates more accurate. 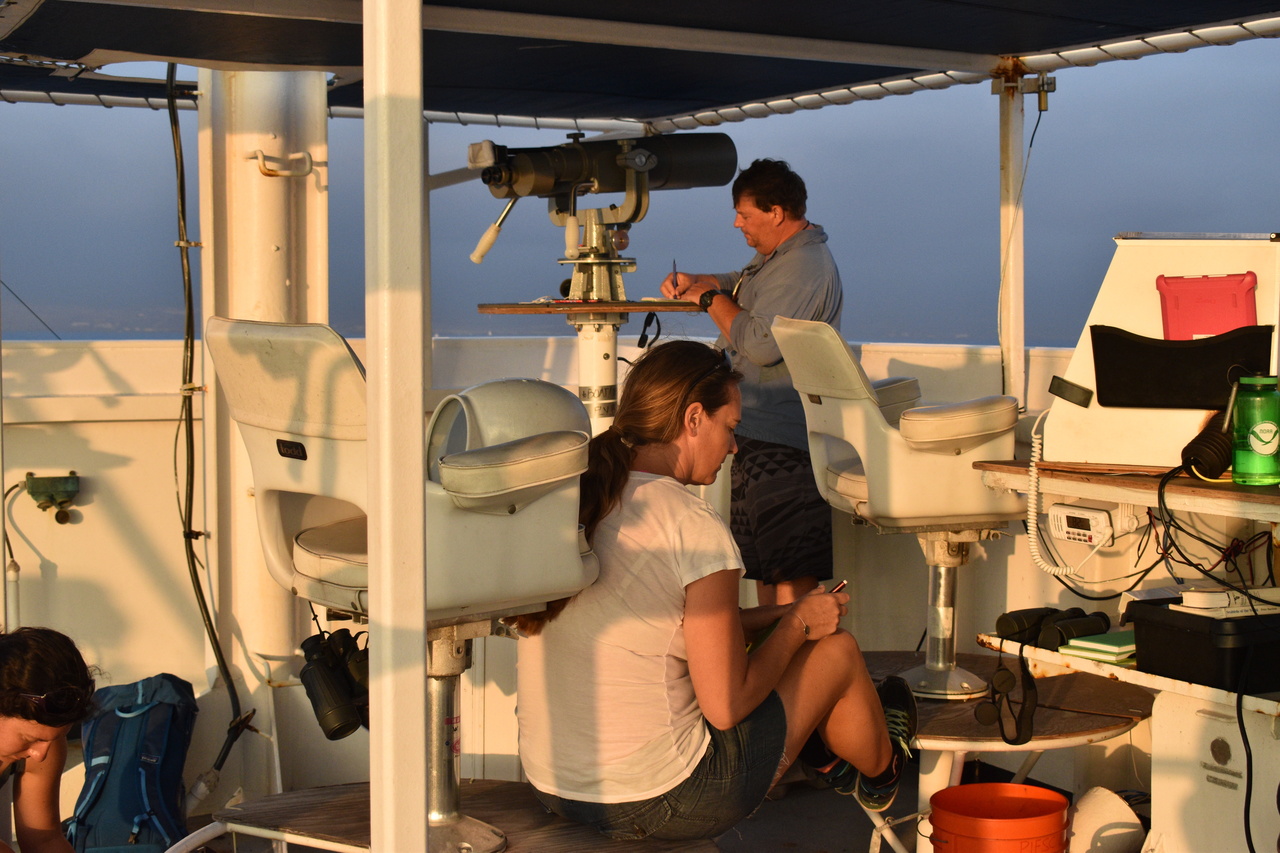 Although sightings are made by the visual team, an acoustic team is simultaneously listening and independently detecting cetaceans that are vocalizing underwater. Once a sighting has been made, communication between the two teams opens up, and the acoustics team is often able to help the visual team keep track of sighted cetaceans that are no longer at the surface. However, the acoustics team does a lot more than provide support to the visual observers. To learn more about the role of acoustics during HICEAS, stay tuned for our next blog post.

Until then, you can keep up with our high seas adventures on the HICEAS website!