Eavesdropping on the Ocean: A Day in the Life of a Cetacean Acoustician

Acousticians are essential to cetacean surveys. 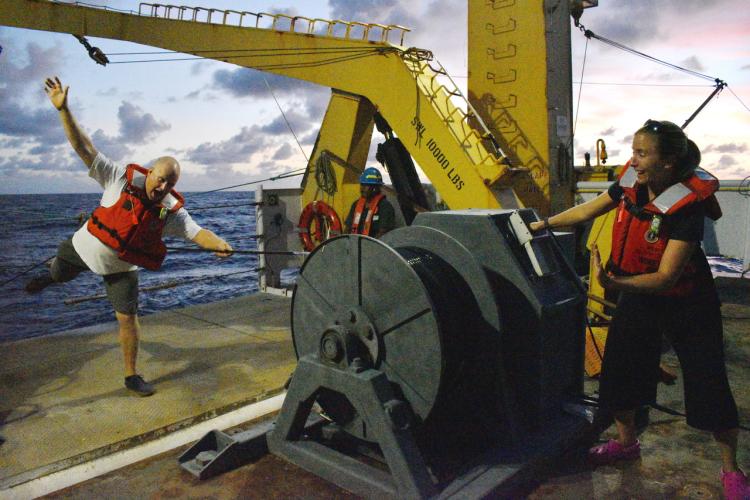 Acoustician Erik Norris and NOAA Teacher at Sea Staci DeSchryver hard at work deploying the towed array system off the stern (back) of the boat for nighttime eavesdropping. Credit: NOAA Fisheries/Amanda Bradford

Early mornings–late evenings–listening some of the world’s most majestic marine mammals… welcome to the life of an acoustician at sea. Using a unique set of tools, we eavesdrop on animals below the ocean’s surface. With at least 25 species of cetaceans (whales and dolphins) in Hawaii, the variety of sounds is incredible. Some of those sounds are easy for us to hear and identify, but others are a challenge.

Dolphins and other toothed whale species (e.g., sperm whale, beaked whale) produce a variety of mid- (2 – 20 kHz) to high- (> 20 kHz) frequency echolocation clicks and whistles (call types). Many of the calls are outside the human hearing range (inaudible to the human ear). The highest frequencies most young adults can hear are around 15 kHz. A dog training whistle makes sounds between 25 and 55 kHz. Some dolphin clicks are as high as 115 to 130 kHz. Can you believe there are animals out there making sounds that high? 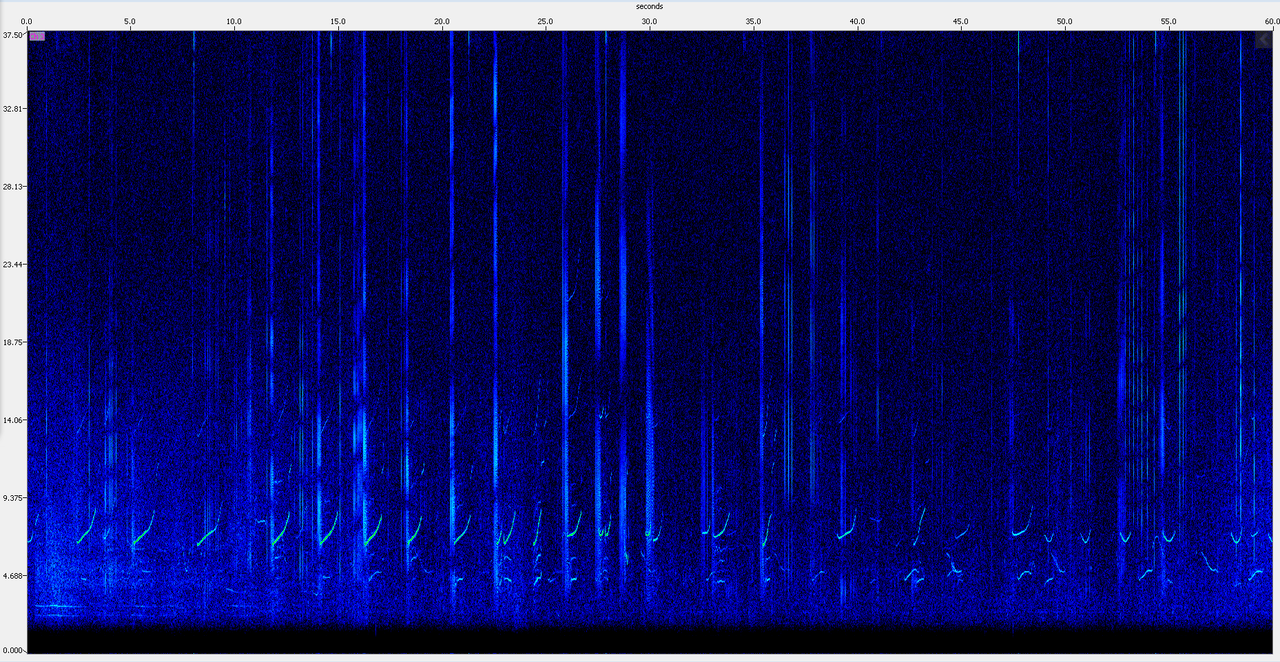 A spectrogram, or visual image, of echolocation clicks and whistles produced by our priority species, the false killer whale. Credit: NOAA Fisheries

Acousticians aboard the NOAA Ship Oscar Elton Sette for the 2017 Hawaiian Islands Cetacean and Ecosystem Assessment Survey (HICEAS) spent the better part of two months prepping for this voyage before departing, including designing and building a towed array hydrophone system that can detect all call types from 1 to 250 kHz. We also set up and tested fancy customized software to record the acoustic data and track dolphin sounds. The towed array system is a series of six hydrophones towed 300 meters behind the ship. The unique spacing between each hydrophone allows us to track and localize the echolocation clicks and whistles in real time to determine how far away the whales or dolphins are from the ship. After an echolocation click or whistle is emitted from the animal, it hits, and bounces off, each hydrophone. Based on the time that signal arrives at each hydrophone, our fancy software can calculate the location of the animal. Pretty cool, right? 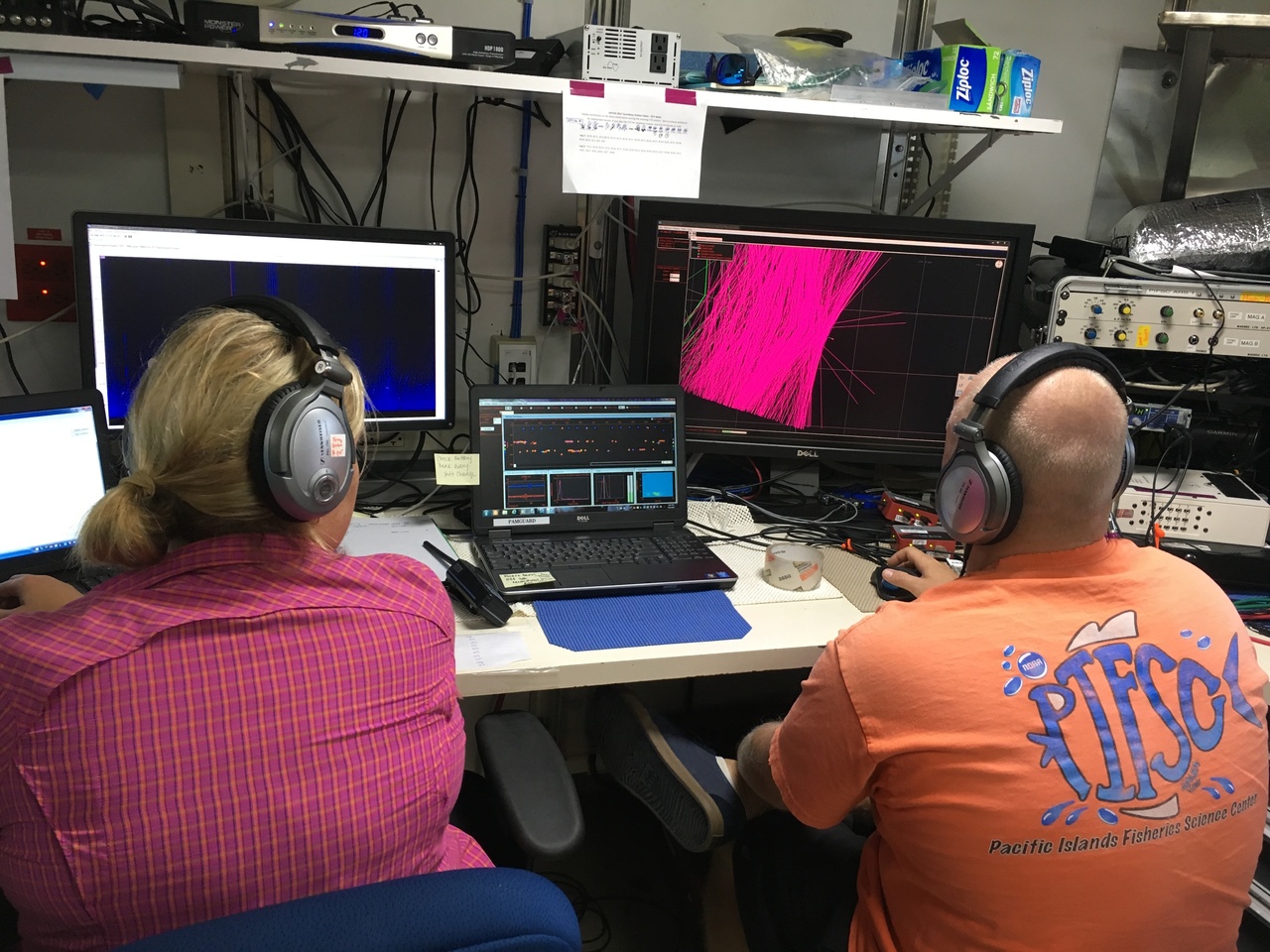 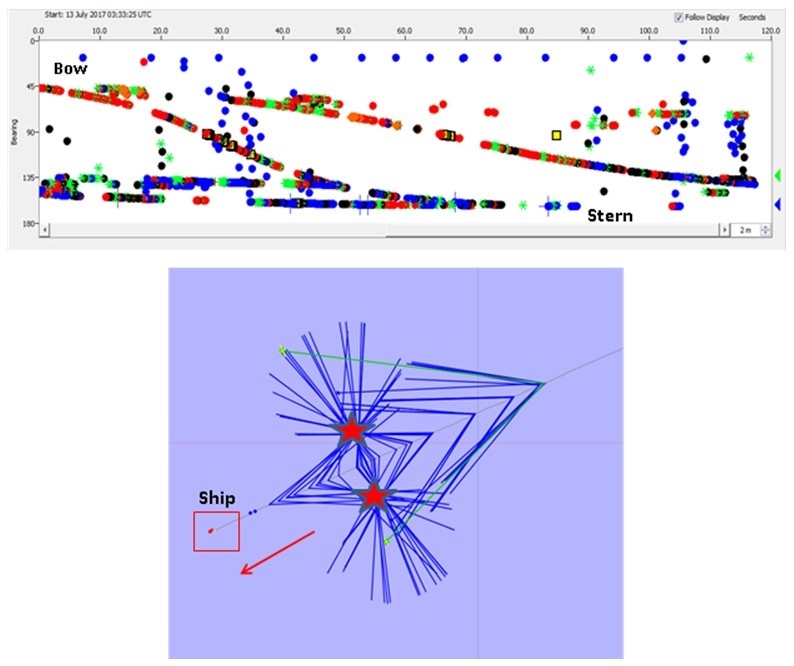 Customized software called PAMGUARD is used to track echolocation clicks. The upper image shows the time and bearing angle to each dolphin click as the animal moves from the bow to the stern of the ship (bearing angle 45 to 180 degrees). The lower image shows those same calculated angles on a map allowing us to measure the distance from the ship to the dolphins. The red star is the location of the group. When we’re traveling in a straight line, we can’t tell if that group is on the left or the right side of our track. Credit: NOAA Fisheries 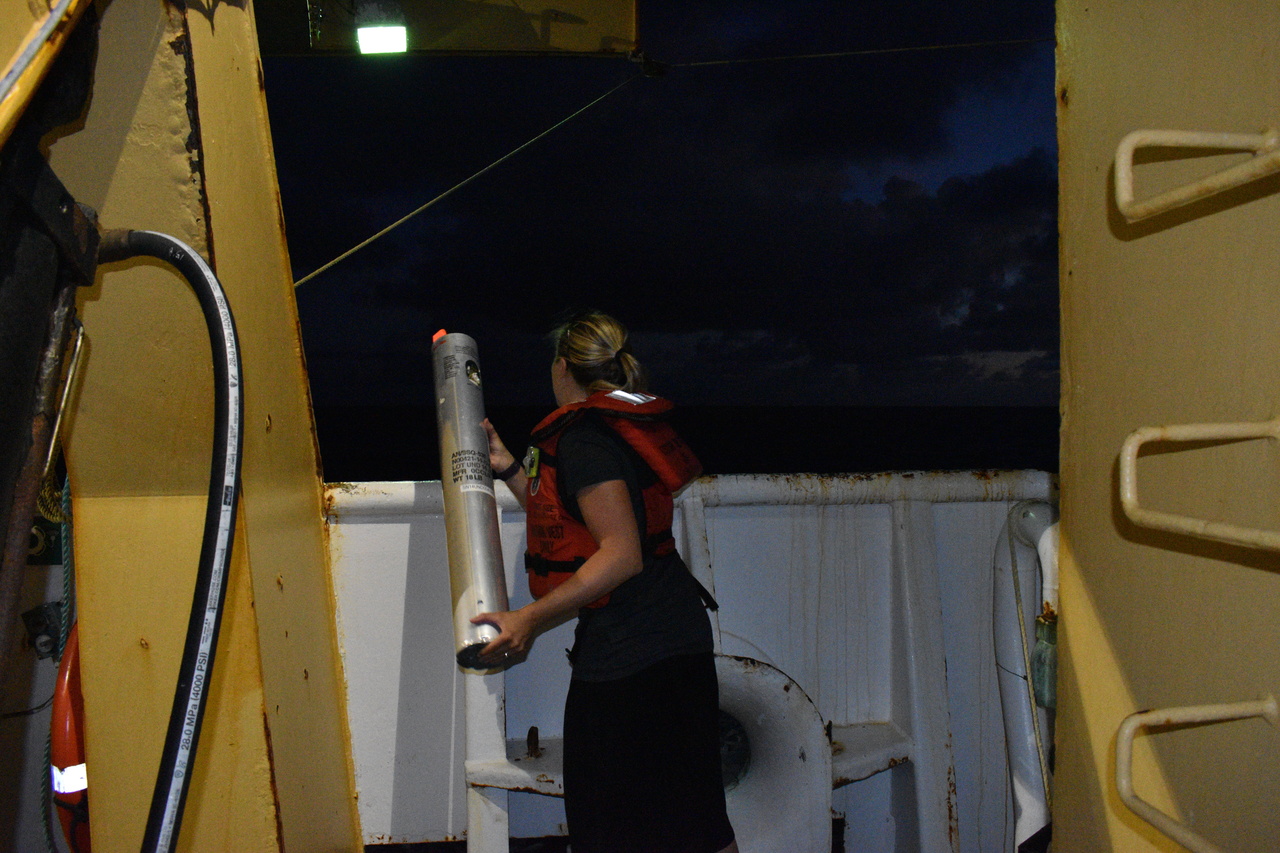 In contrast to dolphins, baleen whales produce low-frequency calls (10 Hz – 1 kHz). Our towed hydrophone array system isn’t built to listen to these low frequencies. Instead, we use a different tool–the sonobuoy–that is designed to detect lower frequencies. Sonobuoys are deployed from the ship and drift with a compass and directional hydrophone 30 meters below the surface. The data are then transmitted over a VHF radio signal to our lab on the ship, and we can track the location of the whales. Sonobuoys are challenging to use when we are moving along at 10 knots during a normal survey day, but when we stop at our evening CTD stations, we have a unique opportunity to listen in for a couple of hours, and hope we are lucky enough to detect baleen whales.

The last piece of equipment in our magical bag of whale-tracking tricks is the Drifting Acoustic Spar Buoy Recorder (DASBR). DASBRs are deployed from the ship to drift on the ocean current for several weeks at a time. They consist of two hydrophones, 10 m apart, connected to a small recorder at the bottom of the buoy. DASBRs are tracked with satellite transmitters to be recovered later during our survey. By using this technique, we can cover more survey ground, detect animals long after we leave an area, and hopefully find animals that usually shy away from passing ships. 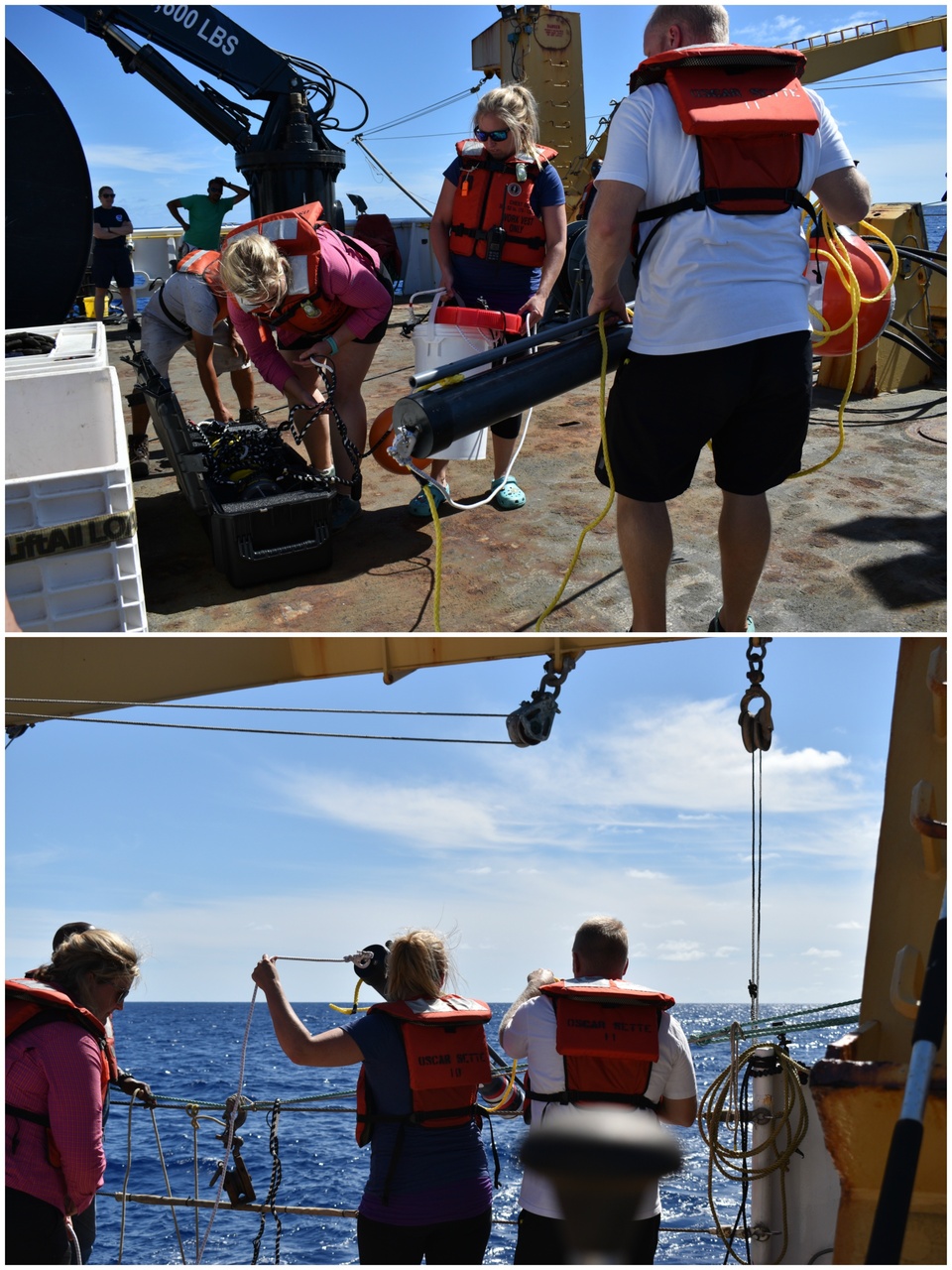 As you can see, there is never a dull moment for the HICEAS 2017 Acoustic Team. We are continuously monitoring every dolphin and whale group we find in hopes that our efforts will provide the resources needed for management of the various populations surrounding the Hawaiian Islands. 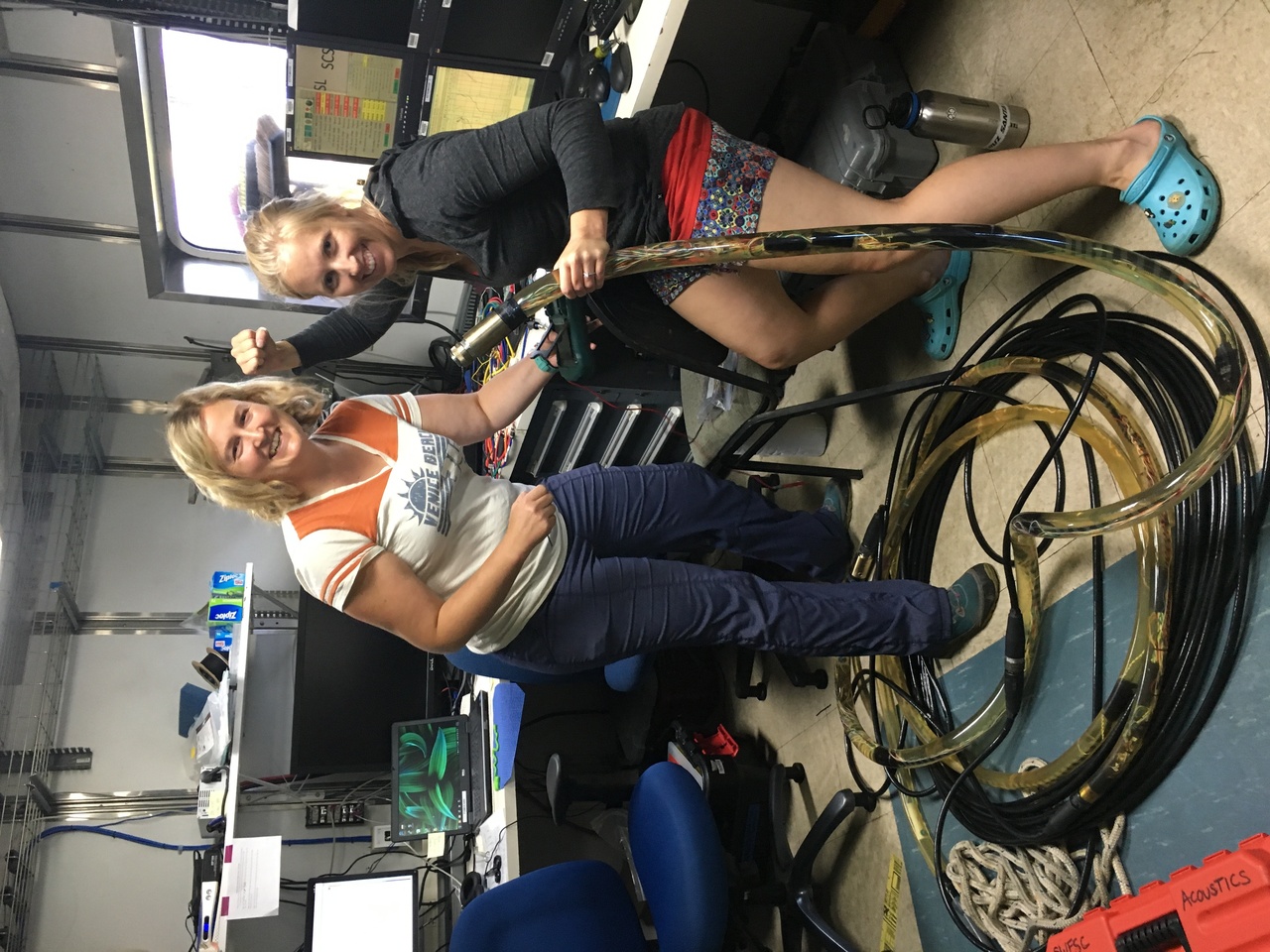 Check out our high seas adventure on the Story Map!

Previous: Made Ya Look! Next: HICEAS Hilite: Killer Whales in the Tropics