A rare encounter with killer whales in Hawaiian waters. 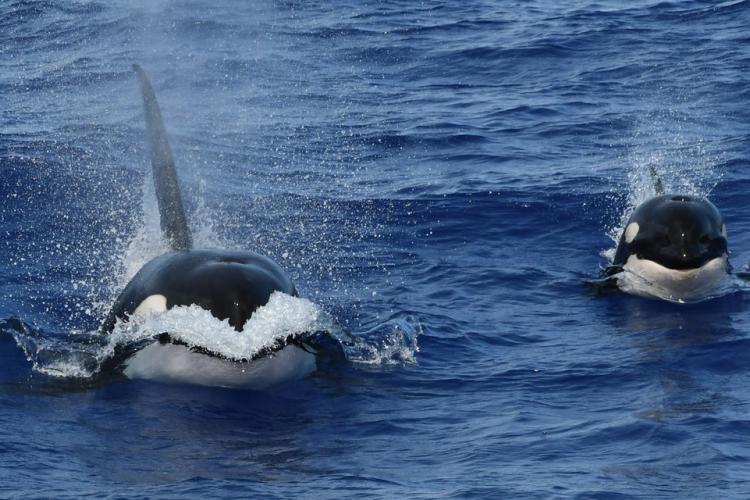 The killer whale (Orcinus orca) may be the most recognizable marine mammal on the planet thanks to its striking appearance and prolific presence in pop culture (think Shamu, Free Willy, and Blackfish). If there’s one species of cetacean that everyone participating in the 2017 Hawaiian Islands Cetacean and Ecosystem Assessment Survey (HICEAS) is excited to see, it’s the killer whale. Killer whales are infrequently seen in Hawaiian waters, and that’s why July 18, 2017, was a special day for the scientists and crew of the NOAA Ship Oscar Elton Sette.

Most people think that killer whales inhabit cooler, coastal waters such as those found off the northwest coast of North America, Norway, or Antarctica, and they’re right; most killer whales prefer higher-latitude, near-shore habitats. But the killer whale has one of the widest geographic distributions of any mammal, and there are some populations that call the tropics home.

On July 18, 2017, we were cruising along northwest of Nihoa in the northwestern Hawaiian Islands, on the lookout for suspicious splashes, dorsal fins, shiny patches of skin, or anything that might indicate whales or dolphins were ahead. What we saw first were black and white shapes underwater, approaching the ship. Some of us held our breath. Could it be… black and white… killer whales? YES!!! The whales swam by the ship and then continued on their way. We broke our planned transect to follow them and collect data and photographs and were able to track them for nearly an hour, but the whales eventually eluded us in the windy, wave-strewn sea conditions.

Because killer whales are encountered so rarely in the tropics, much less is known about them than their counterparts in other regions. In the northeast Pacific, for example, scientists have found that multiple populations of killer whales are socially isolated, make different sounds, and prefer different prey from one another, even though they inhabit the same waters. So far, the population structure and characteristics of killer whales found in the tropical Pacific, including Hawaiian waters, is mostly a mystery. Often called “marine deserts,” tropical pelagic waters are known for their low productivity, which likely means there isn’t enough prey to allow for the multiple, prey-specialized populations that are found in the productive waters of higher latitudes. Tropical killer whales are more opportunistic in their prey choices and have been seen to eat everything from octopus to sea turtles to dolphins. During previous encounters with killer whales in Hawaiian waters, other marine mammal species fled the area, so it’s possible nobody is safe when tropical killer whales are around!

Satellite-tracked movements have shown that killer whales in the greater Hawaiian region are visitors that pass through as part of a larger oceanic range that they cover. Despite hundreds of days of research effort spread throughout the entire Hawaiian archipelago, sighting rates of killer whales are low; fewer than 10 groups total were sighted during PIFSC ship surveys in 2002, 2010, 2013, and 2016. 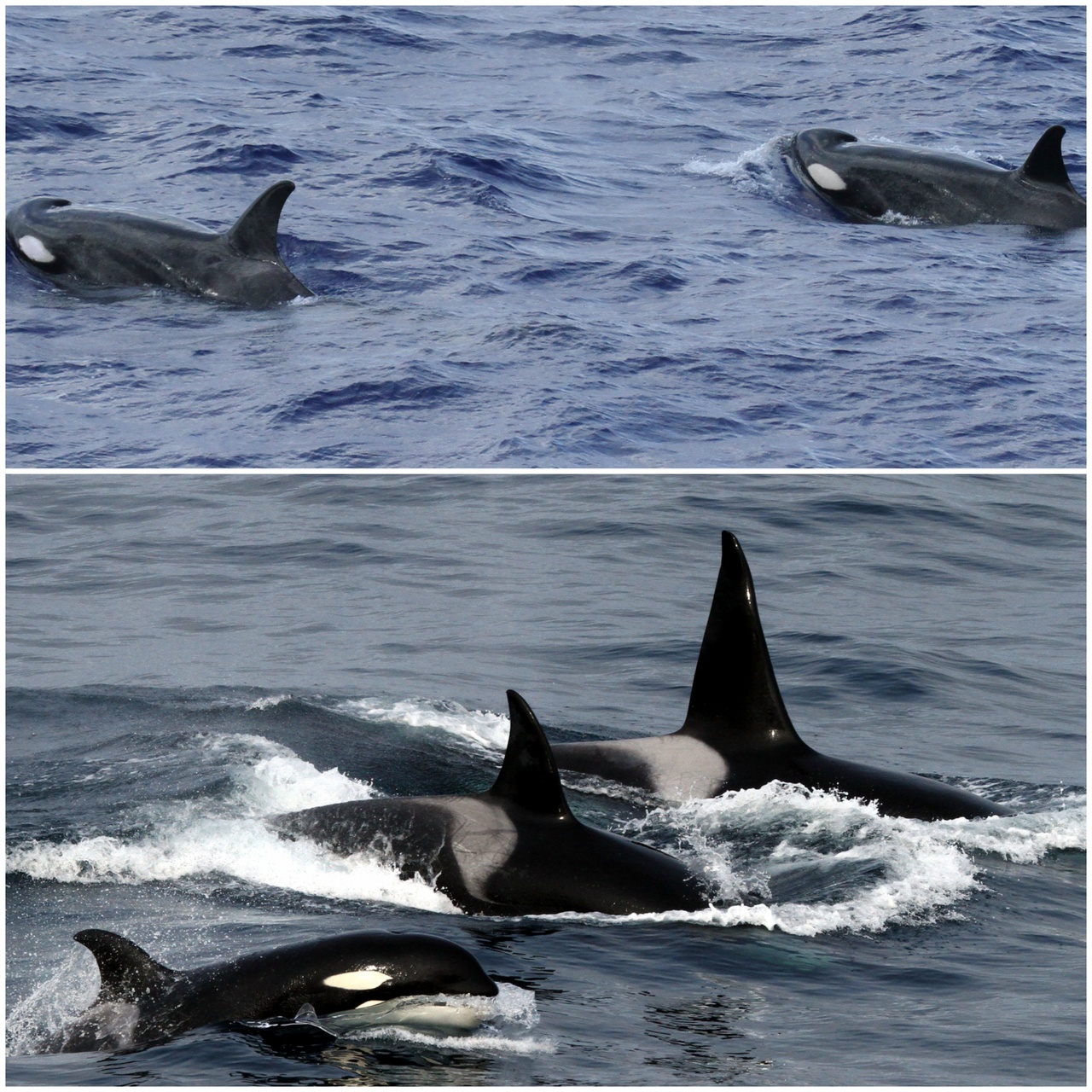 The group we saw on July 18 was small, and we were able to photograph four individuals – an adult male, a juvenile, and two adult female-sized animals (sub-adult males are the same size as adult females before they “sprout” and grow their characteristic tall dorsal fins). Most killer whale groups sighted in Hawaii have contained less than 10 individuals, which is consistent with group sizes of killer whales seen elsewhere in the tropics. The low productivity likely limits the amount of prey available for apex predators such as killer whales. Since individuals in killer whale groups share their catch with each other, a smaller group is easier to feed when food is eventually found in these tropical “marine deserts.” The acoustics team on board reported that the group we sighted did not produce any sounds. Since small group sizes and quiet, stealthy behavior are traits of mammal-hunting killer whales in higher latitudes (in contrast to the fish specialists that often travel in large “chatty” groups), the noted silence may give us a clue about the preferred prey of the group that we saw. 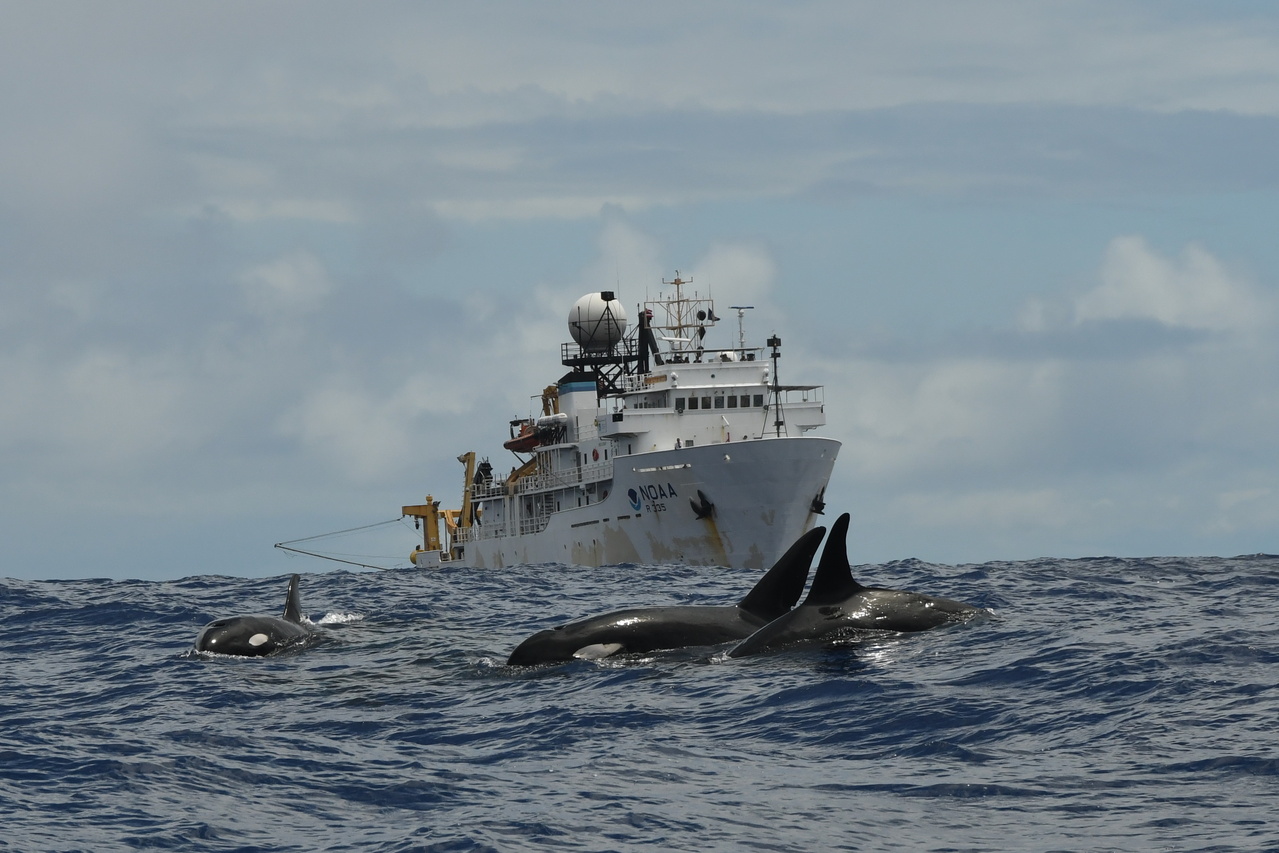 Killer whales sighted north of Maui during a Sette survey in July 2016. When and where in Hawaiian waters will they be seen next?! Credit: NOAA Fisheries/ Adam Ü (Permit #20311)

We feel incredibly lucky to have had such a rare sighting, and we’ll be looking for more during the upcoming months of the HICEAS survey! Follow our Story Map for updates on our survey.

Fun fact: Did you know that killer whales are actually dolphins? They are the largest dolphin in the taxonomic Family Delphinidae. There are other dolphin species in Delphinidae that are called “whales,” including the long- and short-finned pilot whales, the false killer whale, the melon-headed whale, and the pygmy killer whale.

Previous: Eavesdropping on the Ocean: A Day in the Life of a Cetacean Acoustician Next: How a Land-locked Teacher gets an A+ and Sea-Salty Memories for Life